The club had a large scale test of the new Rogue Stars rules from Osprey.  We had 10 players in all, each one interested in giving the rules a try.
The Rogue Stars rules are from the same stable as the Song of Blade of Heroes rules, and share some similarities. As usual I found myself caught short and opted to make a force using whatever models I could quickly find.  This turned out to be the Aliens vs Predator game so I managed to quickly gather a force together consisting of 2 Predator's and a couple of Predator Hounds.  The Rogue Star rules aren't really intended to be used to create dogs, but I managed to shoehorn some dogs in by making sure they only had traits and no equipment.
My opponent had taken one of the lists form the back of the book and modified it slightly to accommodate his chosen figures correctly.  Rogue Stars is more of a toolbox for tabletop based roleplaying games, and to reflect this there are a large amount of table sin the book, one for scenario, one for location and one for any complications.   We rolled for scenario and ended up with Hostage, which looked a bit complicated for out first game. We rolled again and got Gladiatoral Combat. Even Worse. In the end we opted to just go for a simple raid, with the attackers (my Predators of course) trying to push the opposing forces off the table within an hour. We waived the hour limitation, as it was our first game.  My opponent had the luxury of deployment and occupied a couple of buildings, while I attacked from my table edge. 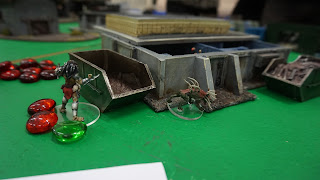 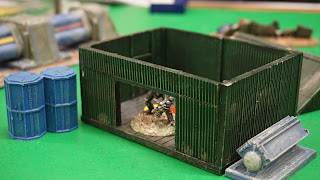 Rogue Stars has a simple activation system. One player is active while the other is reactive. As the active player you select a model and declare how many actions you are gong to attempt, up to a maximum of three. You then roll a D20 for each action, with a target number of 10 or above.  For each success you can the perform one action. For each of these die roles that fails your opponent gets a reaction die, which he can then use to attempt to activate one of his models, or steal the initiative, becoming the active player instead.  Every time you perform an action you receive a point of "stress". These stress points make it harder to activate your models, as each one gives you a minus to your activation roll. You can keep on attempting to activate your models indefinitely, until your opponent steals the initiative or you relinquish intuitive to your opponent.  The only way to get rid of your stress points is to end your turn, or have it stolen at which point all your stress points are removed.  It is theoretically possible to keep activating your forces for a long time, with individual models activating multiple times, but eventually you will build up so much stress you wont be able to achieve anything. 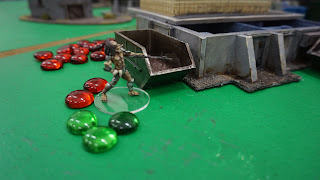 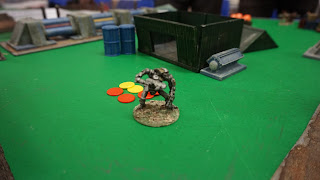 In our game my die rolls were pretty awful and I gave away lots of reactions to my opponent while just trying to move.  After a change of die things heated up pretty quickly, with one of my dogs being psychically controlled, until the psyker was shot by a Predator. That predator was in turn killed by the big robot with the laser cannon hiding in the shed.  We managed to get the feel of the rules pretty quickly, and while there are potentially a lot of rules in the book, you will only ever need to remember the select few that apply to your squad.  In the end we ran out of time and had to halt with 2 Predators left on the table and my opponents big stompy robot.

So not a bad introduction to Rogue Stars, and the general feeling seemed to be quite positive. The rules seemed pretty easy to get the hang of, although I really struggle with games where you have to roll a die to be able to activate your troops. It is the same reason I am not too keen on Warmaster or Dragon Rampant. It can lead to some very frustrating games, as indeed this one proved to be in the early stages of the game.

There is lots of flexibility in the rules, with the author adding more traits all the time via facebook.  I see there being two strengths to these rules.  The first is the level of interaction. At no point in our game did either myself or my opponent feel disengaged from the game, or that we were just spectating while the other person took their turn. This is a good thing and keeps all parties involved.  The second strong point is the sheer flexibility of the game. The warband creation rules are very broad, with the ability to create almost anything, and use any models. the sheer variety of models on show during our test was testament to that. We had 40k Imperial Guard, 40k Necrons, Void Miniatures, AvP miniatures, and a few others I cannot remember the name of.


I think the game will have some legs at the club, with already some talk of a campaign. The trick will be to use the tools in the game to create a warband of characters and then use the rules to tell an interesting story. If you want to use the rules to create the most powerful warband possible and crush your opponent then these are probably not for you, plus you wont make many friends.
Posted by Kevtheinx at 13:54