Once more into the hive..

Mission three of the Aliens vs Predator boardgame, with 2 novice players and one veteran (he's played one game and read the rules so technically he is now an expert).
The objectives this time were:
Marines:  retrieve a part from one room on the map, and then carry that part all the way across the board to another room.
Predators:  Collect 5 trophies, plus make your way to the hibernation chamber to wake up the infected humans, thus creating more Aliens to hunt.
Aliens:  Put 2 acid damage tokens into three separate rooms, spread around the board.
John (the expert!) opted to play the Marines, Kev went the Predators and Kenny decided to play the Aliens.
Early game saw the Aliens come out running, with them engaging the Predators almost immediately. the Predators tried to advance but found themselves getting bogged down by piles of Aliens and pretty much failed to move very far for the entire game.  The marines advanced out of the room they were in cautiously,  ready to put down lots of fire on anything that came into view. 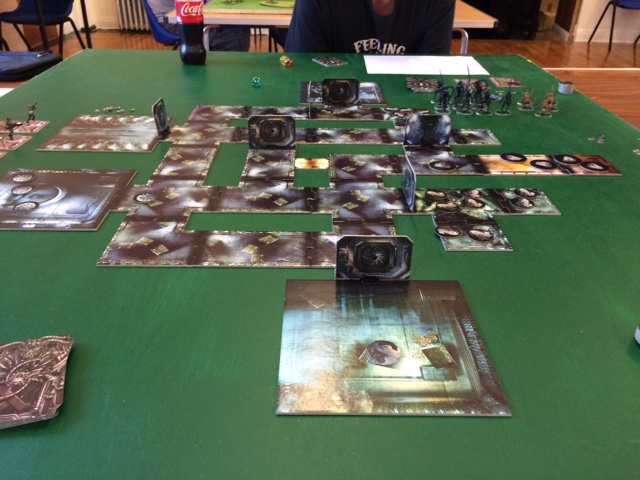 The Aliens managed to eventually put some acid tokens down in one of their target rooms, but their attacks against the Predators were proving ineffectual, although it was holding them up nicely.  The marines were having a  great time though, as they had a good line of site to a couple of Predators, and they seemed quite happy to just sit at the end of the corridor and be shot at them, which over the course of the game managed to kill 2 of the 3 monstrous hunters, and also bagging a fair few Aliens as well.   Meanwhile the Predators were pretty much focusing all their attention on the Aliens, and were making a pretty big mess of them as well. 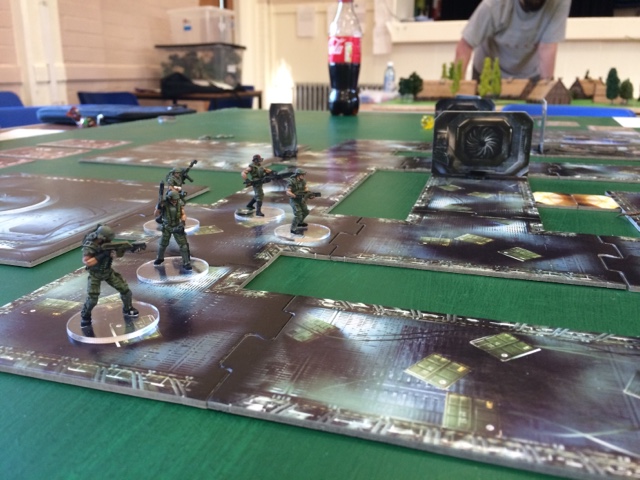 Late game and there was only 1 Predator left on the board, but crucially it was the one armed with the Smart Disc, still 4 Marines and a handful of Aliens.  The Predator managed to make short work of the few Aliens that he was still fighting, before turning his attention to the Marines. Up until this point the Marines had been largely ignored, but now they had the full attention of one wounded Predator. In two rounds the Predator had managed to make short work of the Marines and the entire squad was gone. Ouch. 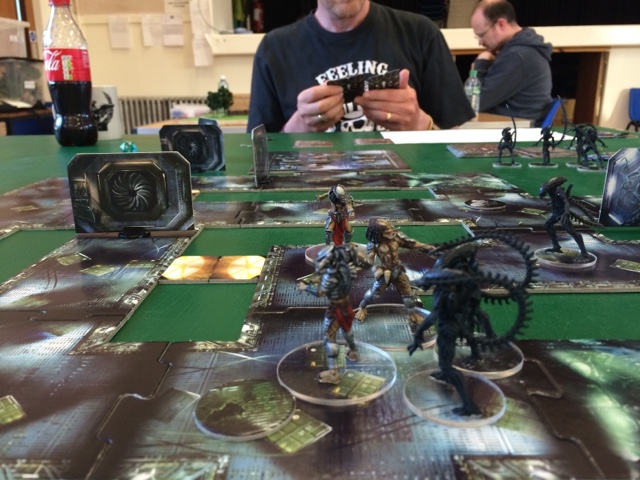 This left 2 Aliens and a single Predator on the board.  Kenny had started to be a bit sneaky and circled round the main combat and into another of his target rooms. Unfortunately this put his remaining two models in range of the Predator who promptly finished them off, leaving it the only model on the board and having plenty of time to complete it mission objectives.
Another interesting game, with the Predators managing another win (only just though!). This one was interesting in that everyone had an objective to complete that involved moving round the board, but all three players seemed more interested just killing each other, although to be fair to the Predators they were attacked pretty much from the off so never had the chance to move much at all.


This is the third game I've run for this and I'm starting to get a good idea about how all the factions work. I'm particularly interested in the Alien faction as they look quite challenging to play (i.e. a bit underpowered). The next time I bring it out to play I am going to have play as well, and see if I can manage to play the game as well as run it at the same time.
There is also currently a new version of the rules in development and I am very excited to see what changes they have made.  I think the core rules of the game are sound, just some of the special rules need clarified and tweaked a bit, and the Aliens could do with a bit of a boost as I don't think the basic models in the boardgame box are up to the job, certainly not against a Predator. I could add in some of the beefier Aliens but I wanted to run through the basic game first to get a feel for it.
All three players seemed to enjoy themselves, although I think Kenny had given up by about half way through the game. This also happened in the second game when Douglas was the Alien but at only three games it is difficult to tell if it is a big problem or not.
That lead me to my final thought, which is about the difference between running and playing games.  My gaming can be broadly split into two types.  There are the pick up games, where my opponent and I agree to play a game to an agreed size and then each go away and select our forces and then play the game.  This is usually games like Warhammer, Chain of Command, Urban War etc. Then there are the games where I offer to run something for two or more people. This is usually for a rule set or range of miniatures that I like, but no one else has access to. This would normally be AVP, Lord of the Rings,  or War of the Rings.
These are two very different ways of playing, and if I am honest I find the second  more stressful. The first type of gaming, of playing pick up games is fairly relaxed, with some enjoyment to be had in looking through army lists and trying to pick something that will provide an interesting game.
The second type of game is slightly more stressful as I find that I am trying to entertain a group of friends for an evening who have given up their time to play in one of your games and I would not like for them to be bored or have a rotten time.  It is not generally a problem as most people are quite lad back and just happy to be playing a game of something that they wouldn't normally play. That does not mean that I don't enjoy running these games, as they can be quite entertaining but there is always the thought in the back of my head of "is everybody enjoying themselves?" and I don't want to look around the table and see someone clearly not having a good time, as I would feel slightly guilty about that.  Having said that some people are never going to be happy unless they are crushing their opponent into dust and will quickly lose interest if that doesn't happen, but luckily these people don't turn up very often.
Next week I am eturning to an old friend and having a game of WHFB 6th edition. I wonder if I will still enjoy it as much as I remember?
Posted by Kevtheinx at 05:10