No, not Aliens vs Predator, but another sci-fi game involving gribbly aliens and human marines.

This time it was Urban War, originally made by Urban Mammoth.  I have recently started thinning out my wargames collection and as a result of this I sold of my Urban War Viridian and VASA.  As a result of this the people I sold the models to, Rory and Dave were interested in getting in a game or two.

Rory and I decided to have a bash, with a fairly sizeable 300points a side.  I opted to use my Koralon this time, as I don't think the Gladiators can really cut it in Urban War, and Rory using his newly acquired (and brilliantly painted! lol) Viridians.

This also gave me the chance to use my Forward Base terrain, from Antenicitis workshop. I had been itching to get it on the table since completing the basic build earlier in the year. Still lots to do to finish it off but it was done to a standard that made it useable.

We opted just to do a "scuffle", which a straight fight across the table with victory going to whomever stays on the board the longest.  Break point this time would be 50%, with the first to reach that level having to pass a command check or leave the table, and then again every time a further casualty was suffered.

The table was 4 foot square, with the Forward base spread across the table and a large amount of scatter for cover.

Having never really used my Koralon in Urban War very much I took a bit of everything:

As neither of us had worked out our lists before hand we went for the minimum calibre we could, to make things easy to remember.

Earl game as predictable, with the Viridians taking up firing positions while the Koralon advanced, hugging as much cover as they could.

Mid game and some shots from the Viridian centre took out one of the Reapers, causing the other three to panic.  On the left the Koralon were still advancing, avoiding any fire they could.  In the centre the Phazon managed to get a warp portal off, putting it slab bang into the middle of the Viridian gun line.  A brood rushed through, trying to take out the Sgt in melee, but failed miserably and was killed for his efforts.  The Larvan decided that he would have a go a charged through, managing to take the Sgt out, sending a ripple of panic through the marine lines.  the Larvan used his follow on action to engage a second marine but unfortunately paid for his bravery and was taken out of the game by a boot knife.   At this point the broodmaster came through the portal, also fluffing his attacks against the lowly marine (who is this guy?!) before narrowly missing being wounded himself, and then panicking. 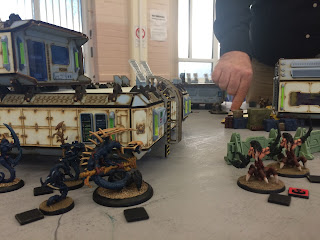 On the left the Koralon were finally getting stuck in, although the assault was not going well with several of the assault specialist Brood coming a cropper to marines armed with boot knifes. 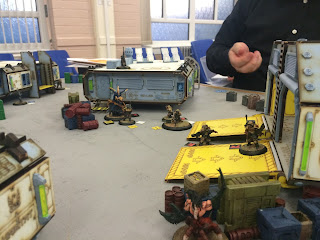 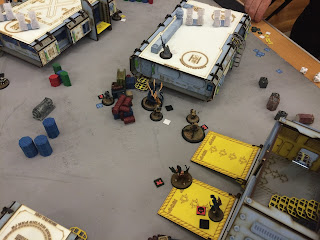 Mid to late game and Koralon casualties were beginning to mount, with it taking on average three Koralon to take out any marine model. The Koralon reached and then passed their break point, with only a few good command roles keeping them in the game.  Luckily the rest of the Koralon were now making contact, with the lone remaining Reaper charging and taking out a Marine, and the Phazon himself charging into action and gaining a kill.  This put Rory at his break point and in typical fashion he failed it, leaving the Koralon bloody but victorious.

An interesting game, if a little slow due to us not having played it in a long time (well over a year, it might even have been two).  I've also never really tried the Koralon either and found them to be quite fun, if a little one dimensional.  Certainly more effective than the Gladiators, who I've always found to be sub-par in the game, especially against the likes of the Syntha (duckshoot anyone?).

It was also good to get the Forward Base terrain on the table.  We did not make full use of it, with no on entering any of the buildings, but they certainly looked the part even though they were just stuck on the table to provide some cover.  We haven't played a lot of Urban War recently, and I think it is a game that we will probably re-visit shortly.  While I have a few niggles with the rules (it is too easy to panic, close combat specialists are generally underpowered/overcosted) but it plays quite quickly and is easily completed in a couple of hours, which is good.

Email ThisBlogThis!Share to TwitterShare to FacebookShare to Pinterest
Labels: Forward Base, Urban War