Monday night saw the continuation of our Chain of Command campaign, "48 Hours in May". In the opening games of the campaign both Marco and myself as the Germans had broken through the French lines, commanded by Ian and Barry.  These early games were fairly bloodless and we decided to press out advantage and attack the town of Baincthun.

Marco kicked off the assault along the main road against Allan's French, as Ian has a new job offshore and was going to be away for a while.  He had a disastrous game and the German assault was soundly repulsed, with no French casualties, so there was a bit of pressure on my Platoon, who would be attacking along the dirt track that  ran into the village.

I rolled a 7 for support and opted to give the sniper and a HMG team a try for this game, figuring that as armoured cars had featured heavily in the opening of the campaign that Barry would take some kind of Anti Tank options, which he duly did.

Looking at the board I decided that the only real option I had was to push down my right, as the left hand side of the board was looking rather empty. 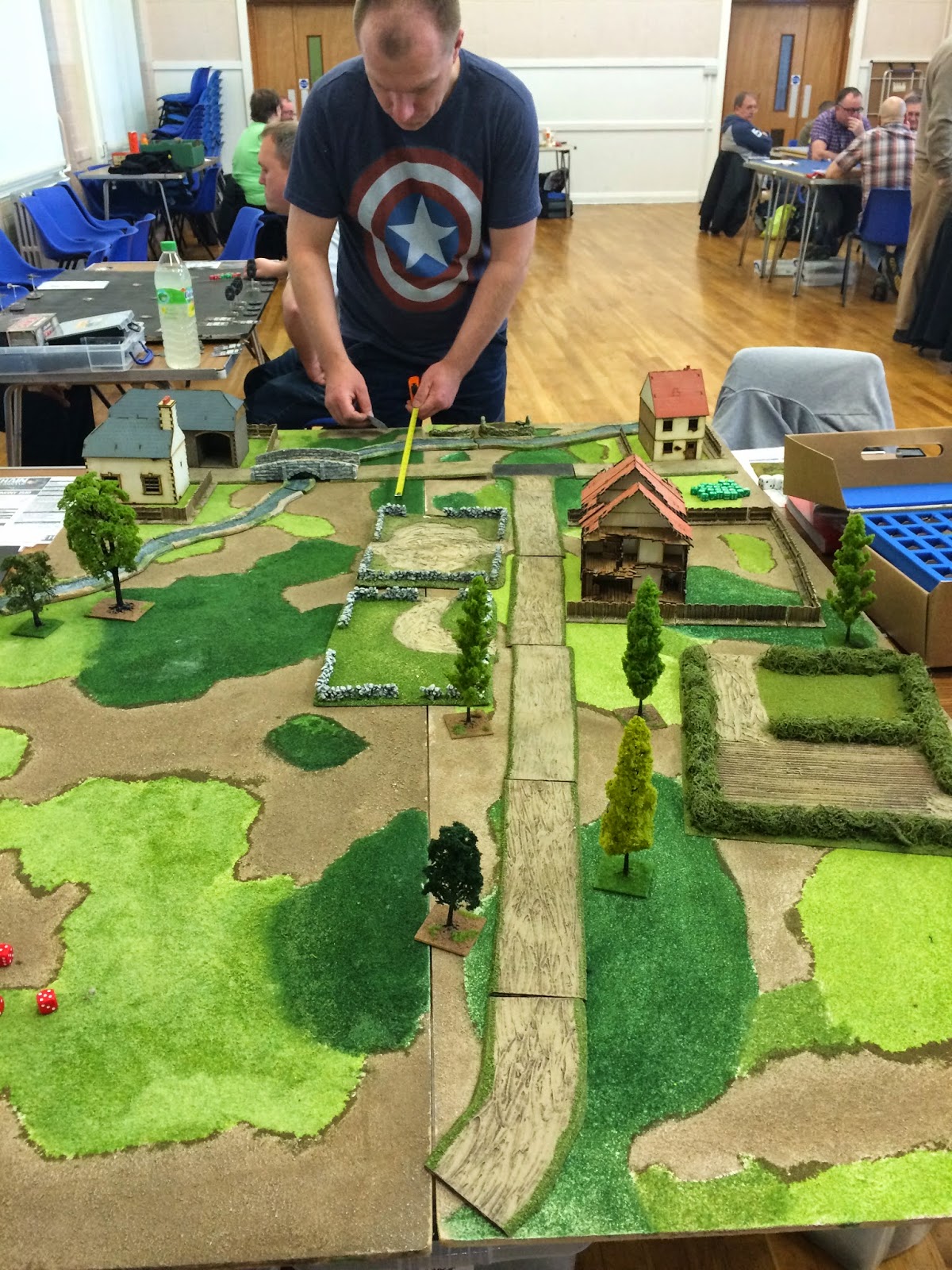 My initial probes involved deploying one squad and the light mortar on my right and seeing what Barry would do to counter this.  He deployed two french squads against my right and put his anti tank gun in the centre.  At this point he also deployed his platoon commander, all by himself with no support.  I could not resist the temptation and in my phase deployed my sniper who managed to kill the unfortunate officer with his first shot of the game!  Barry was none to pleased with this and en exchange of fire ensued on my left, with my Germans coming off slightly worse, with four sixes resulting in four casualties to one French salvo. Not good.


Emboldened by this success Barry started to advance on the German positions. He used one squad to give covering fire, while advancing with the other.  I decided that I would sit tight for now and deal with the advancing French, which I started to do.  I poured a lot of fire into them, and then deployed my Machine Gun and and additional squad into the centre. The additional squad was to provide suppressing fire onto the French that were in the ruined building, while the HMG team added their considerable firepower to those already firing at the advancing French. The German machine guns took their toll and I managed to Kill the junior officer, wipe out the machine gun section and then rout the remaining few rifle men.  In addition to this I had managed to wound and then kill another of Barry's junior officers, leaving him with a command problem and a Force Morale of 1!

He decided to call it a night at this point, having suffered 9 casualties and three dead officers. Thanks to the difference in Force Morals scores I was able to recover all my casualties and came through the game relatively unscathed.

Another interesting and entertaining game, but in truth Barry had some very bad luck with officers getting killed, and I think my dice rolling was about average. One thing to be said is never advance over open ground into the teeth of German Machine Gun fire, as it was surely Barry's undoing on the night. Also never deploy officers on their own.  For myself this was my first time using the sniper and HMG team and one thing it did throw up was the additional strain on Command dice all these extra elements add.  I had an additional two units that both required 1's to activate, and I think I only managed to get my sniper to fire three times in the whole evening.  This can of course be mitigated by the canny use of senior officers but they are sometimes needed for other things.  Snipers and HMG teams are useful, but can tie you down to quite a static style of play, although the psychological effect of snipers is going to interesting.

As we play more and more Chain of Command and each element of support is tried on the table there is a certain amount of paranoia about facing them. First was the off-table mortar barrage as they can be very devastating, then armoured cars became a bit of an issue but people are now adapting to them. Now we are onto exploring the snipers and additional firepower. I can't wait until I get to try a Flamethrower!  This is a good way of exploring the game and keeping everyone on their toes, as we widen the rage of support elements that we can potentially use in a game, so you have to think careful about potential strategies to counter them.  It all makes for a more interesting and balanced game, in my opinion.

As this was the first outing on the table of my own painted Germans I expected it to be a disaster, as the first outing for newly painted toys usually is, but this could not have gone much better to be honest.
Posted by Kevtheinx at 13:10 3 comments:

Chain of Command is my new 40k

Its a sort of weird title but it feels just like that.

I spent my formative war gaming years playing 40k Rogue Trader. Back then the game was just that, a game with some nice miniatures and the setting captured the imagination of my 12 year old mind very well.   Back then GW was a fraction of its current size and the game was a lot smaller in scope and size.

My memories of playing 40k back then were of choosing a core of troops and adding in a few nice toys to add a bit of flavour to the game. This was usually a few dreadnoughts, or a some buggies and jetbikes. Then we added in a few Rhino's and perhaps a Land Raider. It made for a good fun game but at the core of the forces were always the various troops and their variations.  Back then the most common choice was a tactical squad of Space Marines, with a few added Assault Marines and Devastator Marines. Orks were similar, with a sea of troops, some leaders and loads of buggies and bikes. Eldar was mostly troops, with lots of Dreadnoughts and War Walkers, mostly as that was basically all that was available at that time.  We had great fun playing  these games, and list selection and min maxing was not really of any concern, you just picked what you liked and could afford!  Nowaday I still enjoy the setting, but more through the slightly more interesting and balanced mediums of the novels, although they can be variable in quality.  I am still a huge fan of Epic as well, and feel that 40k these days is increasingly being played in the wrong scale and would be a lot more fun done in 6mm.

40k has a bit of a kitchen sink feel to it now, with the constant desire to chase profits and sales meaning that GW are constantly looking for new ways to shoehorn new toys into the game regardless of how they effect the feel.  I did not play much 40k 2nd edition as that was my drinking and going out phase, and when I came back to it 3rd edition was just not the same game, although it is pretty playable if you only use the rules and lists in the main rulebook.

Fast forward quite a few years and I have played few other skirmish level games, most notably Void and Urban War.  Unfortunately Sci-fi skirmish gaming has been on the back burner for a long time as I played Warhammer Fantasy Battle, Lord of the Rings and Impetus.

What has all this to do with Chain of Command?  Well to cut a long story short of all the games that I have played since I have been gaming for the last ten years Chain of Command feels the most like the 40k I used to play.  It is a core of infantry squads with a few added elements of support, all tied up in a very nice set of rules.  It is the fact that the heart of the game is the infantry, with a few elements of support to add flavour and a bit of unpredictability.  It is probably about as far from 40k in terms of setting and aesthetic as it is possible to be, but in terms of how the game feels to play I find it reminds of my early 40k gaming a lot. That probably explains why I am so fond of the game, which is especially surprising as I have never really taken to WW2 gaming before.

That turned into a bit of a wall of text, but I hope is not to boring to read.  I have a large pile of Rogue Trader Orks in my loft waiting to get painted and I find myself sitting when I get a moment and wondering how the Chain of Command rules could be applied to the 40k setting. I'm sure it could be done quite easily.............
Posted by Kevtheinx at 11:33 2 comments: