This week saw another trial of the 9th Age rules, which is the fan set of rules created after GW killed of 8th edition.  It was a return match against Andy and his Empire, with me opting to again use my Dark Elves.
This time I decided to field a full MSU force, with no unit being bigger that 10 models. Andy had changed his force slightly, opting to drop the second unit of knights for two units of Pistoliers, and replacing the Greatswords with a big unit of Halberdiers. This left him able to field four characters, with 2 in his main unit of knights and 2 in his big units of halberdiers.
I had a total of 15 small units, and was hoping to do some movement and manoeuver nonsense, but alas it didn't quite work out that way.
Deployment was fairly standard, with the majority of my units occupying the centre , with my Bolt Throwers on my left ready to deal with the Empire Knights, and the Cold Ones on my Right in a position to tackle the Demygryph Riders.


I had a couple of new units that I wanted to try out this game, including the Warlocks, Executioners, Sisters of Slaughter and a chariot. Andy got the first turn and romped his army down my throat, with both units of Pistoliers getting within shooting distance of my troops.  In his opening shooting phase things got pretty bad for the dark elves, as the cannon managed to one shot a bolt thrower, and the mortar landed a direct hit on the Executioners, killing 6 and causing the rest to panic.  they never rallied and promptly fled from the table in my first turn. In addition to this the Pistoliers killed 4 out of the 5 warlocks. This left me with the no left flank, and I hadn't even rolled a dice yet!
Seeing the way this was going in my turn I advanced as much as I could in the centre, my left had nothing left to move and my Cold One Knights advanced while staring down the Demigryph Knights. The harpies advanced, trying to get into the Empire back line and try to deal with annoyingly accurate artillery. My shooting was fairly average, and I managed to deal with the Pistoliers on the right flank, strip a few ranks from a unit of spearmen and that was about it.  My bolt thrower failed to do any damage to the knights though, making a bad situation even worse.  my Corsairs with Hand Bows advanced and shot at the Pistoliers on my left flank, inflicting 2 kills.
Empire turn 2, and the knights charge my badly out of position Warlocks, catching when they turned to flee. One unit is spearmen charged a unit of Witch Elves and the Demigryph Knights sat on the hill, quite content to wait for the Cold One Knights to make the first move.  the empire war wagon (I forget its name) charged the Harpies, who fled but were caught and wiped out. The Empire shooting proved decisive again, with the cannon taking out the other bolt thrower and the Pistoliers killing 5 of the Dread Elf Corsairs.  Andy at this point felt the need to apologise for the way the game was going.
The witch Elves managed to fight the spearmen in the centre to a draw, mainly thanks to some impressive armour saves on his part. 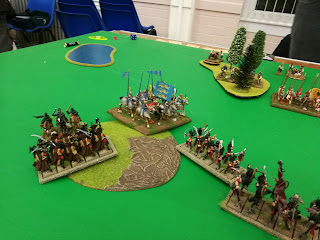 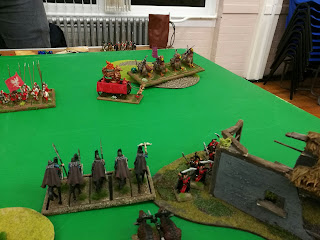 Dark Elf turn 2, and things were getting desperate. In an effort to inflict some casualties and salvage my game I charged the second unit of Witch Elves into the Halberdiers, and moved the Sisters of Slaughter round ready to receive the charge from the incoming Knights.  My shooting was again fairly average, with some casualties inflicted on various empire units, but not enough to make any big difference.  Andy finally had some average luck and I managed to break and run down the first units of Spears, while my second unit of Witch Elves inflicted eleven casualties on the Halberdiers, before being wiped out. My remaining Corsairs opened fire at the Pistoliers again, inflicting 4 wound, and Andy duly saved every single one on them even though he was needing 5's or 6's.
Empire turn 3 saw the knights charge into the Sisters of Slaughter, and the spearmen on my right flank catch the chariot off guard and managing to charge it.  In the shooting there were not many targets, with Pistoliers killing all but one of the Corsairs, before the super accurate laser guided cannon took the head of the last one with a precision shot.  Luckily the mortar misfired this time.
In the combat phase the chariot manage to see of the spearmen, running them down, while the Knights managed to beat the Sisters of Slaughter, but not by much thanks the their ward save who then held to fight another round.
Dark Elf turn 4 and things were getting even more desperate as I was rapidly running out of troops.  The Chariot charged the empire war wagon, which was right in front of it, and not much else moved.  In the shooting phase the Crossbows fired at the advancing Halberdiers, trying desperately to get Andy to fail at least one panic test, but with no success.  the sisters of Slaughter managed to hold of the knights of for another turn, although the Cult Priest was killed in the process.  the chariot did not manage to quite kill the war wagon, but it did rout from combat, fleeing from the field though so some small mercy. 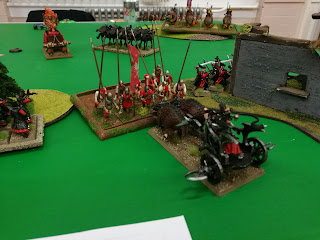 Empire turn 5 and there was not much movement.  The Halberdiers charged the first unit of crossbows hiding in the woods and that was about it.  The Empire Knights managed to kill off the last of the Sisters of Slaughter, while the Halberdiers wiped out the Crossbows. True to form the cannon pivoted and killed the chariot with one shot, leaving me with pretty much no troops left on the field.
Dark Elf turn 5 and there wasn't much left to do. the Cold One knights attempted a long charge ta the Demigryphs, which failed. The Dark Riders charged the empire mortar and the remaining Witch Elves charged the flank of the empire Knights.  Shooting achieved nothing and in the ensuing combat the Dark Riders failed to kill the mortar(!) and the witch elves managed to kill the last of the knights, but were then done over by the remaining characters.


We called it quits there as there really wasn't much left for me to do at this point. A clear victory for the Empire.
So second game in and not really a great test.  Andy's dice rolls were so extreme that I had pretty much lost the game in the first turn, although I still made quite a few mistakes with movement.  think I might have pulled it out of the bag but I wasn't aggressive enough. Having a unit of Cold One knights, including two hefty characters spend the game staring across the table doing nothing is probably not  a great use of points (and they were worth a lot). The executioners never got to do anything at all, but the Sisters of Slaughter were the stars, really saving my night by holding up the big knight unit for a couple of turns.
My main issues this game were the empire artillery and the empire characters. If it weren't for the presence of the double characters in the main empire combat units the combats would have gone differently and I will need to find a way to deal with characters for the next game. Perhaps give an assassin a trial.
I think leaving the general with the cold ones was also a waste, and he would have much better used in the centre, where he could have started dealing with the empire characters.  I am also pretty rusty at the positioning of units, and lost a few of them due to not thinking ahead properly but that is something that I will relearn with time. I always used to position units by thinking one turn ahead, and have lost the habit of doing that. the cold one Knights are a classic example of this, as they did nothing all game due to my inability to work out how to get them into position to get the charge, which their lances require.  I would like to split them into two small units but I think the stupidity would then cause me problems.
As for 9th age itself there are  still a few things that bug me.  The super accurate cannons are annoying, although in this game Andy was very lucky, hitting with every shot and doing maximum damage every time, but it still seems a bit off.  The line of sight rules are very odd, with war machines able to shoot through woods, and even friendly troops with reduction in accuracy. In 8th edition you could shoot a mortar or catapult indirectly, but your chances of hitting were much reduced. Also the lack of templates is a bit sad as well, with mortars and stone throwers being pretty much digital, with either a hit or a miss. the scattering templates were much more entertaining to use due to the risks involved.  I dint bring any magic this time, as I don't thing it is worth the cost you pay, especially for elves as they suffer horribly from miscasts and I cant say that I noticed its absence much.
There are still some odd things in the Dread Elves army book as well, that I think need addressed, such as cult units losing Killer Instinct and some dodgy points values. There doesn't seem to be any particular reasoning behind this, and I would be curious to know why they did that. I imagine the answer would probably be "balance issues".
Its still good to be playing Warhammer again, which has been my main game for a long time, even though I grumble about the rules a bit (or a lot!) and I've got to give credit to Andy for putting up with it (me) and remaining a gentlemen throughout.
Posted by Kevtheinx at 07:12 2 comments: