A few of us found ourselves at a loose end this Monday, so I offered to run a game of War of the Ring using my Rohan and Isengard collections.

We had four players so I went for a sizeable 200 point game, with a pitched battle on an 8 x 6 foot table. The scenario was fairly simple, with each side gaining one victory point for every three enemy companies killed, with an additional four if the enemy general was eliminated.

The Rohan Army consisted of:

The Isengard force was:


The table was fairly open, with some scattered ruins on one flank and a single wood on the other.  Only one of the four players had actually played the game before, and the one person who had hadn't looked at the rules for a number of years so there was a fair bit of work on my part trying to make sure that I remembered everything.

The forces of Isengard deployed across the open part of the table, with the large Uruk formation taking up the open ground in the centre, and their left flank made up with the Troll, berserkers and Uruk Hai scouts, with Shaku's Warg Riders on their extreme left.  They opted to deploy Vrashku's crossbowmen on their right flank, ready to make their way through the ruins to gain a good  firing position.

The Rohan deployment was centred mainly on their right, with the infantry holding the centre and the cavalry concentrated on the right flank. The Rohan plan was to attack with the cavalry while playing a delaying action in the centre.  the Rohan made no attempt to enter the ruins on their left flank, effectively leaving that side of their forces unprotected. 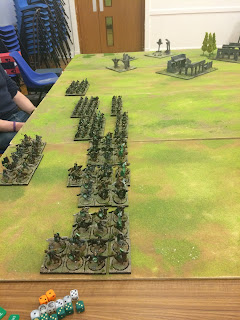 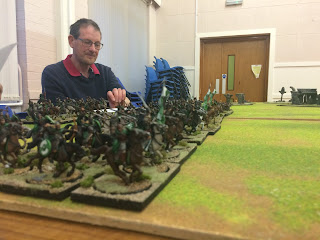 Early game played out as the Rohan intended, with the centre holding firm and shooting at the advancing Uruk's, inflicting some casualties on the way, while the Rohan cavalry on the right advanced quickly to try and turn the Isengard right flank.  However the Rohan cavalry quickly ran out of room to manoeuvre and became bogged down in a war of attrition.

The middle of the game saw a change in fortunes as the Rohan right was starting to lose heavily, especially when the Isengard Troll became involved and their casualties started to mount.  Vrashku's talons also found a good firing position and in a couple of rounds had destroyed 4 stands of Oathsworn Militia, leaving the Rohan left flank extremely exposed to attack. 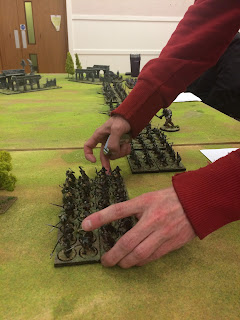 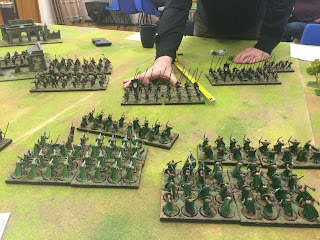 Late game and the two lines of infantry finally clashed, with the large Isengard formations starting to make a mess of the Rohan Infantry, while the Rohan cavalry on the right did not have the space to move that they needed and were unable to break through the enemy lines.  At this point we ran out of time and called it, with it looking like a fairly solid Isengard victory.

An enjoyable evening with a large number of toys on table.  In retrospect probably a few too many, especially with 4 players who knew nothing about the game, but everyone seemed to have fun.  I tried to remember everything but inevitably a few things were forgotten, so the game did not go as smoothly as I would have liked. Also as I was so busy running the game I forgot to take photos, so only have the measly four here. One other player was taking a few more pictures than me so hopefully he will update his blog soon (Alba Two, in case you were wondering, although for some reason I cant post a link into the text on Blogger)

I think I will need to order some more custom counters from Warbases to act as an aid to memory. I am also looking for a better way if marking casualties and Might points. At the moment I use a D8 to mark casualties on companies, as the thought of constantly having to remove models from sabot bases, only to have to put them all back on again at the end of the night is annoying. I would also like to use some markers to represent the Might points that heroes and leaders have, but I don't want to make all the counters and markers too intrusive on the table.  I will order the additional counters that I know I am going to use and have a think about the rest.

In hindsight the Rohan ignoring the ruins on the left was possibly a mistake as it would have provided them some protection, and also given their cavalry more room. In the end though nobody really knew what to expect or how anything would perform so this was definitely a learning game for everyone, including myself.

In this game I learnt the rules for defensible terrain (on the hop, pretty much as it happened, which caused some consternation among some of the players) and discovered I had been doing casualty removal all wrong. This particular change has large ramifications as it makes monsters easier to deal with but cavalry a bit weaker so that will have serious implications for the Rohan in future.

I'm gad that there is still some interest in playing this game, and with Games Workshop revitalising the Lord of the Rings licence I hope that I can still keep players coming to visit Middle Earth for a while yet.

Email ThisBlogThis!Share to TwitterShare to FacebookShare to Pinterest
Labels: Lord of the Rings, War of the Ring
Newer Posts Older Posts Home
Subscribe to: Posts (Atom)