A Bridge to Far

Game four of our Mordheim campaign was a race to find a key, which was stashed in a shrine that was to be found across a bridge at the far end of the board.  There were four giant tics wandering about in front of the bridge as well. They were not particularly dangerous but were hard to kill, having a 2+ armour save.

There were four warbands this time:


I also forgot to bring my phone so there are no photos of this weeks game at all, which is a real shame as the table looked pretty good. Rory had brought some terrain that he had been working on with him and it really added to the atmosphere.  For pictures you would be best to keep an eye on the Alba Two warblog that Rory keeps as he took lots of photos of the game in progress.

We used random deployment this time and I ended up at the far end of the board, furthest away from the target along with Dave. Andy and Rory were deployed further up the table.

Things moved pretty quickly, with Andy and Rory moving up the board quickly and engaging the giant ticks. Rory was also taking any shots of opportunity that he could.  Dave opted to be sneaky and started to slink up one flank of the board, trying to claim the prize without anyone noticing.

I darted straight up the middle of the table, splitting my forces at the lat minute to  make a two pronged attack on Andy's sisters.  My fast left flank engaged them first and actually managed to do what I wanted and hold the sisters in place until the slower elements of my warband managed to catch up.  the shaman even managed to get his spell off, taking the elf scout out of action!  After a short but bloody affair Andy decided to call it a day, leaving my Beastmen victorious, with minimal casualties.

Meantime Rory had lost another member of his warband to a giant tic and in typical fashion failed his first rout test of the game, leaving just myself and Dave in the running.  I weighed up my odds against Dave and decided that I would quit while I was ahead. the prospect of crossing relatively open ground in the face of 4 archers was a daunting one. Especially as my screen of Chaos Hounds had already been depleted.

The Beastmen quite the field, leaving Dave's Marienburgers victorious in their first outing.

I thought I had come out of that rather well until the exploration phase when I encountered an empire patrol.  I managed to get some experience and some gear but the ensuing scrap was quite costly. I had 6 members of my warband taken out of action in the after game scrap!  Luckily no one died but there were a few long term wounds.

Another very enjoyable game with some twists.  Rory had his usual luck and couldn't seem to hurt anything with his shooting, and every second blow that Andy landed seemed to be a critical hit!  After four games my Beastmen finally managed ot get in a decent scrap and are now looking to spend their ill gotten gains.
Equipment is fairly limited for Beastment so I may have to finally expand my numbers. Only problem with that is I am going to have to go and get some more painted........

There has not been much in the way of gaming activity in the last few weeks.  We had a very relaxing family Holiday in Majorca recently and the Tour de France is currently on, during which time most things take a back seat to cycling.

Monday nights remain a fixed point on my gaming calendar though and the game scheduled for this Monday was to be part 4 of our ongoing Mordheim campaign. Unfortunately three out of the six players were unable to attend for various reasons so we decided to postpone for a few weeks until we could get a better turnout.

Instead Andy suggested a game of Warhammer Fantasy battle using the 3rd Edition rules. We all agreed and, with Ric now on board to make it an even four we set off on a nostalgia trip.

Andy kindly supplied most of the models, and knocked up some army lists. The games were all 1000points in size, which was going to be about all we could probably manage on the night as none of us had played 3rd Edition in many a year.

There were four armies on offer:

I opted for the Undead, Ric took the Dwarves, Rory stuck with his trusty Empire and Andy took the Bretonians.  We decided on 2 a side, humans vs non humans. 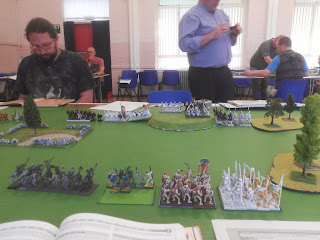 Early in the game Ric started getting a healthy tally of casualties by using his cannons to blow big holes in Andy's Bretonians.  Rory got stuck straight in with his Knights and charges into one of my blocks of Skeletons.  This is where the big difference between the current edition of WHFB and 3rd started to show.  In 8th these combats would have been fairly short and decisive, whereas in 3rd the Dwarves very high leadership proved almost impossible to break, while the Instability of the skeleton meant that we were in for a long night of slowly grinding each other into lots of little bits.

The status quo was broken for me when I summoned some extra skeleton behind the unit of Knights and then charged into their rear. They promptly failed their fear test (or was it panic, not sure really) and fled the field. To add insult to injury my lone remaining skeleton horseman charged a unit of 30 soldiers and they also failed their fear test and fled the field.  In one fell swoop Rory had gone from looking like he had a sure victory on his hands to a disaster.

On my left flank Andy was discovering just how tough dwarves in 3rd edition were and was having a pretty hard time breaking them. We managed to finish the game to a reasonable conclusion, which was not bad considering the amount of reminiscing that was going on round the table about old models and flicking through the rules to try and get things right.

All in all we had a good time and we agreed that the game is probably worth pursuing a bit.  We will probably involve some house rules, with archers being allowed to fire in two ranks already pretty much agreed upon and something needing done to allow combats to be resolved more quickly.

I am already thinking about the two WHFB armies that I own and how they can be adapted to 3rd (retrofitted?). My Orcs will not be a problem as there are enough of them to make a pretty decent army, although I may have to have a root about in the loft for some of my old rock lobbers that are in storage.
My Dark Elves may be a bit of a problem and the 3rd edition DE army is quite different form the 8th edition army. The main difference is the lack of Corsairs in 3rd,  My 8th Dark Elves was always intended to be a light raiding force and so contains lots of Corsairs, which do not exist in 3rd. Their equipment does not even exist, so there may have to be some fudging carried out to adapt.  I can always pick up some DE spear men cheaply from e-bay to use in future games. 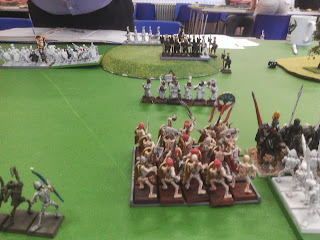 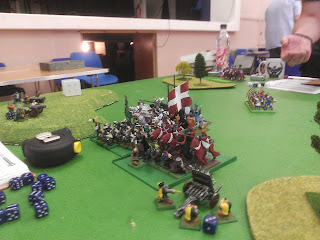 I have no game next week as I am off to Paris for the end of the Tour de France, but the week after that we should be returning to Mordheim. I'm looking forward to it.
Posted by Kevtheinx at 13:58 No comments: