Another Monday night and another games of Kings of War.


This week Ian and I opted to use the Clash of Kings 2018 supplement, and also the random cards that were released alongside. We used the 2k points, with my usual Twilight Kin, while Ian brought his Ogres. Ian was hot of a tournament at Common Ground Games so I expected a difficult night. 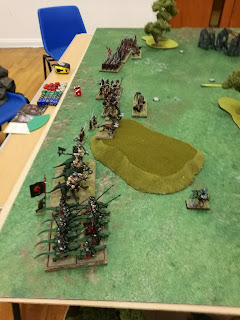 I had ditched the usual spearmen as I find them pretty lackluster, and didn't really expect to be facing any cavalry anyway. For this evening a single unit of Corsairs would be doing double duty as Reaper Guard. 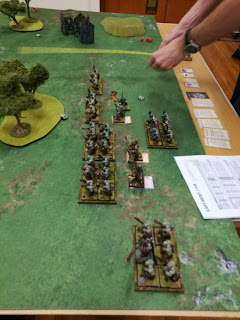 We used the new random cards, and this entails drawing random objectives for each player, one set of conditions for the game, and 1 stratagem card for each 500 points. 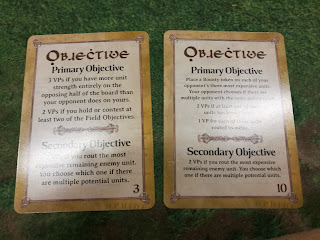 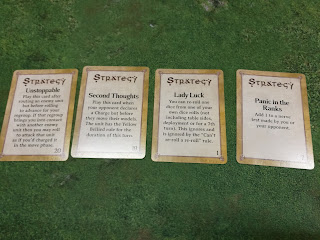 The condition we drew was poor scouting, meaning that the armies only had ot deploy 9" from the center line, rather than the usual 12". useful for Ian's Ogres as he was keen to get stuck in as soon as possible.

Ian primary objective was to capture the objective in my side of the table, with bonus points for capturing the central objectives, while his secondary objective was about killing as many points of my army as possible while losing as few of his.

My deployment was fairly straight forward, with the Crossbows, flanked by the two regiments of the reaper guard covering the open ground in the center of the board, while I put my faster units on my right flank.  Ian deployed almost his entire army on his left flank, ready to burst through the trees and start routing my Twilight Kin. 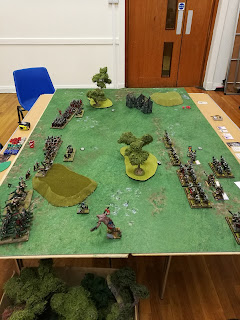 Early game and the Ogres advanced quickly, trying to close the ground with my nervous looking troops.  I decided to just get stuck in and advanced straight at my opponent, with my knights charging and doing a lot of damage to the giant, and the Abyssal Riders routing a suicidal Biggit that had approached too close. 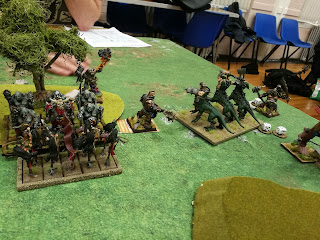 Ian retaliated by routing my knights ad advancing with the rest of his forces. turn two and I got stuck in routing, routing several units, with the Abyssal Riders managing to get two of them, thanks to using the "Unstoppable Charge" Strategem card.

Mid game and the Ogres were starting to look a bit thin on teh ground, with the elves giving a good account of themselves. the Blade Dancers accounted for two ogre regiments, before they themselves were routed, while the lone Elven hero decided to try and take out the badly wounded Giant.  He failed his first attempt, but miraculously the giant fluffed his return attacks, giving him a second chance. Despite some good hits he didn't manage it and was squashed flat fro his lack of performance. 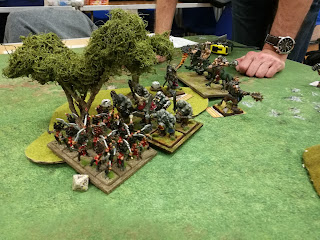 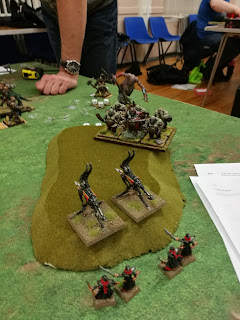 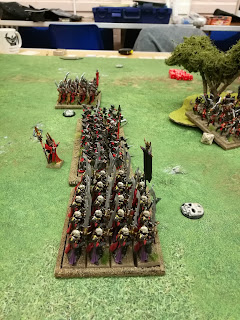 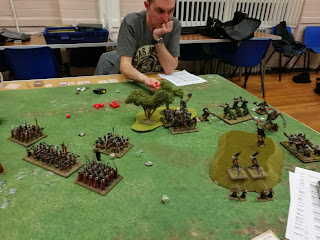 Late game and things started to unravel for the Ogres, withe the crossbows finishing off the giant, and the two units of Reaper Guard routing one of the two remaining Ogre Brave Hordes. The other Ogre Horde had managed to get around my flank and had been tackling my bolt throwers, but by this time I had scored all the victory points I could and was going to comfortably deny the ogres any of their objectives so I wasn't too bothered.  We called it at the end of turn 5 as there weren't enough Ogres left on the board to achieve anything. 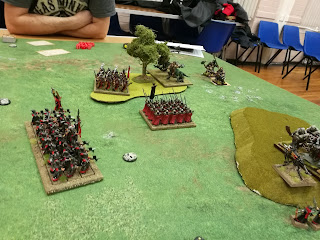 Everything went quite well this time round, with my dice all behaving themselves and rolling pretty well. Ian had a pretty poor night, with some atrocious dice rolls.  I managed to get the momentum on my army early on and kept it, which seemed to be the way to succeed at Kings of War.

The different cards were interesting and I quite liked having asymmetrical objectives in the game. The stratagems were also interesting but the only one that made any real difference was the "Unstoppable Charge" one, which allowed me to rout two enemy units in one turn.

I still consider myself a novice at Kings of War, with only about a dozen games under my belt but I am still enjoying the game and think there is a large amount of traction left in it yet, especially with the cards generating random scenarios and the annual refresh from the Clash of Kings book.  I just wish they would get on and sort out the Twilight Kin to a full list so I can see what to paint next.

Posted by Kevtheinx at 11:31 No comments: