The second to last game of our Mordheim campaign saw everyone making a dash for the entrance to the ruins inhabited by the evil necromancer. All six played were present for this, and it was gong to be a bit of a scrap as we were all trying to get to the same place.  There were some wandering monsters on the board as well.  This consisted of 6 wandering dryad, a couple of animated suits of armour guarding the portal and a wandering tree spirit.  The dryads were going to be fairly tough, as were the suits of armour, but the tree spirit was going to be the toughie, as it had 10 wounds.
Ian won the last game so got to choose his deployment and got a free move before we started, all very welcome to his short legged Dwarf's.  The rest of us were deployed randomly, with my Undead and Dave's Marienburgers coming off worst, being deployed at the far end of the six foot table, with every other warband in between.
Early game saw everyone make a dash for the portal, with very little intention of fighting each other until they really had to.  The dwarfs encountered a dryad, which they finished off with no problems, as did the Skaven and the Protectorate of Sigmar. My Undead also encountered one and I decided that Dire Wolves should be able to handle it. Fetch! shouted the Vampire and off the dogs went. Unfortunately they fluffed it and were both taken out of action for their troubles, leaving the Vampire to go and sort things out.
Elsewhere on the table the Skaven had finally caught up with the Protectorate of Sigmar and given them a good going over, forcing them to abandon the race for the portal. Everyone else was racing for the portal.
Mid game saw an almighty scrap break out in front of the portal as both the Skaven and the Dwarf's tried to force their way through the defenders, and each other.  Casualties were heavy on all sides.
When the Undead and the Witch hunters broke cover in the middle of the board the Undead decided to take a few pot shots at the witch hunters pet Halfling, annoyed at the sniping that they have had to endure at the hands of the annoying so and so for the last few games.  Miffed by this the Witch Hunters decided to about turn and attack the undead. In the ensuing fight a couple of undead were felled but a larger number of witch hunters went down, forcing them to withdraw.
The undead then decided to let the fight at the portal run its course and went after the Marienburgers as they had also decided that it might be fin to take some shots at the Undead.  The undead managed to see of the Marienburgers but not before suffering another casualty, enough to push them over their break value and forcing tests.
At the portal the fight had finished, with the Skaven fleeing the field after some very heavy casualties and the dwarfs forcing their way through the portal, leaving one of their number to his fate at the hands of the big sentient tree.  This left my undead on the field by themselves and they decided to have a bash at the tree, as it was almost down to its last few wounds. I just needed to get across the table without failing a break test. In typical fashion I had a great run of passed tests, making it to within charge range of the big tree, and just before I got to launch my assault I failed my test, fleeing the field.
So not a bad game, with my undead seeing of two enemy warbands. I lost a dire wolf and the Necromancer in this engagement, probably finished of by the vampire due to his failure to do anything even remotely useful for the whole campaign.  He really has been absolutely useless, failing to cast a single spell since about game 4.
I hired another necromancer, and another zombie to bring my number back up to 15. This time the necromancer has the re-animate spell, which allows him to summon zombies back into the game once they have gone out of action.  Considering the zombies are so slow they hardily ever see any action I don't anticipate getting much more use out of this necromancer either.  The undead spells in Mordheim really are pretty useless.
With the campaign running down I have decided to forgo the option to raid anyone so we can go straight to the final chapter, and currently my money is on the dwarf's to take the final game.
Posted by Kevtheinx at 06:09 No comments:

Email ThisBlogThis!Share to TwitterShare to FacebookShare to Pinterest
Labels: Mor

I haven played any games of GW's excellent Lord of the Rings skirmish game recently, so a few of us got together and played out the first Isen Fords scenario on Monday night.

We actually managed a pretty accurate result, with the Fords holding (just!) but Theodred having his head caved in by a Troll.  The game was a draw, and a lot of fun.   Rohan had some terrible luck though, with their reinforcements arriving very late. 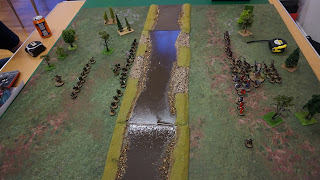 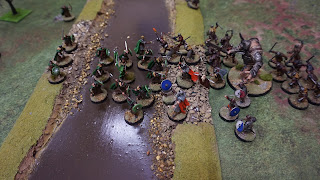 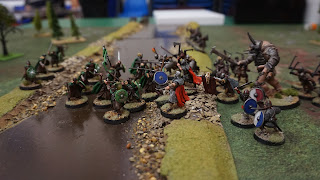 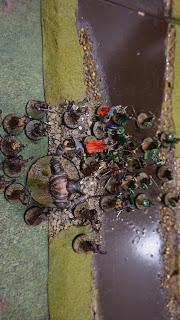 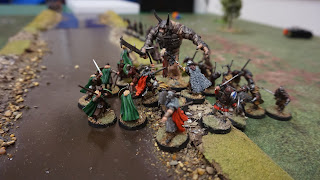 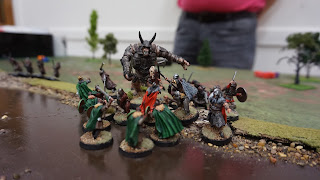 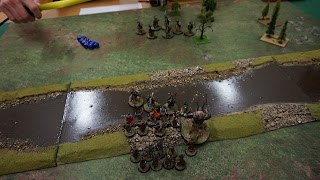 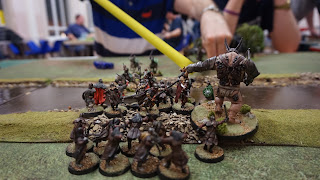 The latest game of 9th Age. 4500 points Dread Elves vs Empire.  Despite the best efforts of my dice I managed to pull of a win, although Andrew was fielding an experimental army that I don't think was as strong as his usual selection.  I removed the Corsairs, except to proxy for other models, and added in a large unit of Executioners. It made a big difference to how the Dread Elves performed. The spearmen are a big improvement over Corsairs, and I don't think the Corsairs will make it back into my list until they do something to make them a bit more interesting.  Also the fist use of my new mat, which enhanced the look of the game a lot. 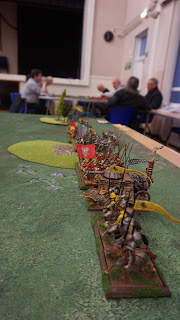 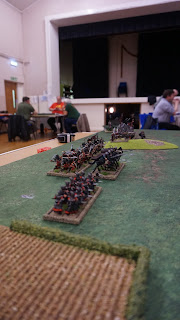 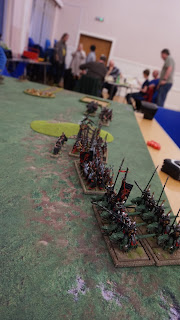 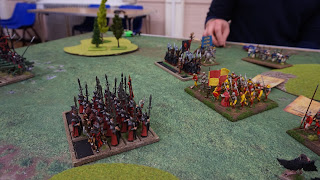 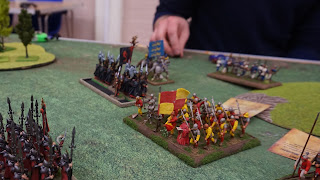 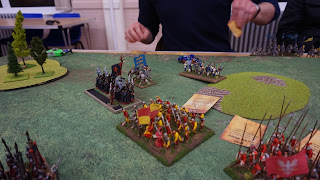 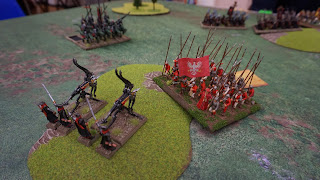 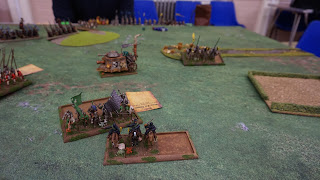 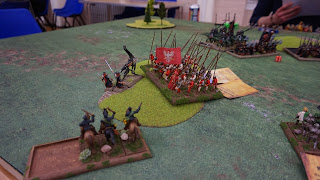 Posted by Kevtheinx at 16:30 No comments: