I have had the Kings of War 2nd edition Rules for a few years now, but haven't really done much with them until now.  I think this has largely been due to playing other types of games than mass battle fantasy.
I have been playing a bit of 9th Age recently and have found the game to be ok, but a bit overcomplicated and still needing a lot of work to balance it out.  I decided that it was time to give Kings of war a try, and Andy, the club 9th Age promoter agreed to give it a try with his Empire army.  I loaned him the books and he seemed quite keen to give the game a try.
I used my Dark Elves and Andy opted to use the league of Rhordia list as it provided the closest match to his Empire army.  I just managed to squeeze out a 2000 point army, mostly thanks to the generous use of magic items. In the end I had:
1 Regiment Spears
2 Regiments Buccaneers
1 Regiment Crossbows
1 Regiment Drake knights
1 Regiment Blade Dancers
1 Hydra
2 Bolt Throwers
1 Troop Gargoyles
1 Troop Heralds of Woe
1 mounted Dark Lord
1 Mounted Army Standard
1 Mounted High priestess with Bane Chant. 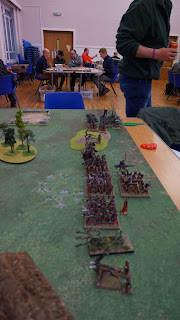 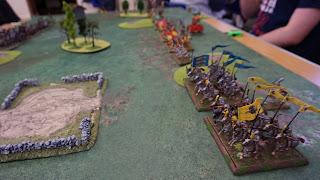 As it was our first game we decided to do the basic Kill! scenario.
The game feels pretty much like 9th Age, with deployment being one unit at a time and then rolling for first turn. Andy won the role off for first turn but opted to go second.
Our forces were spread pretty evenly, but with a definite bias toward the Dark elf left flank, which is where I deployed most of my troops, facing off against the bulk of Andy's infantry. Andy elected to put both units of Knights on his left flank, while the Honour Guard and Iron Beast guarded his right. 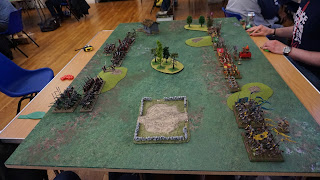 Early game saw us both trying to get to grips with the rules, although after the first turn we pretty much had it down (or so I thought, see below).  There was some exchange of fire, with the Dark Elves inflicting some decent casualties with their war machines and crossbows, but not really enough to break any enemy units.  In return the humans decided to concentrate their fire on the elven crossbows and between their crossbows, the iron beast and the lightning bolts of the  battle shrine managed to shoot the elven crossbows of the table in a couple of turns. 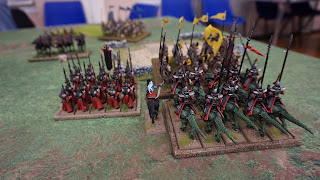 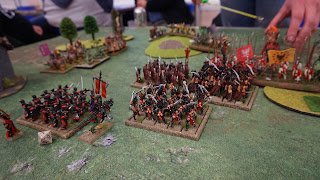 I misjudged a few distances here as well, assuming that humans had a move of 4 inches when it was in fact 5, which casued me to be on the receiving end of some charges I didn't want.  The Dogs of War crossbows charged into one unit of Buccaneers, wiping them out, while a unit if Household Knights managed to get the drop on my Drake Knights, causing some damage.
I also rather recklessly charged the hydra into the Iron beast, inflicted some damage but more importantly exposing the Hydra to a flank charge from the Honour Guard. Charged in the front by the Iron Beast and in the flank by the honour Guard the Hydra was predictably smeared all over the field. I never even got the chance to use any of the Hydra's special abilities. 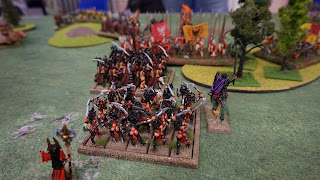 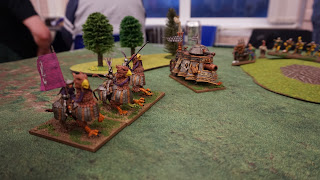 Mid game and I managed to get some revenge, with the Blade Dancers wiping out the Honour Guard, the Drake Knights destroying both units of Household Knights and one unit of Buccaneers and Gargoyles destroying a unit of Household Guard. 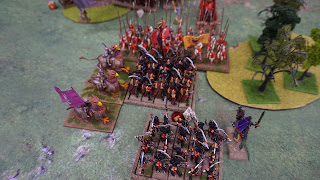 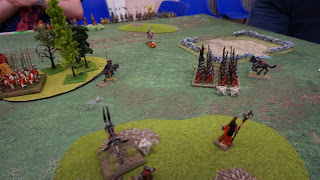 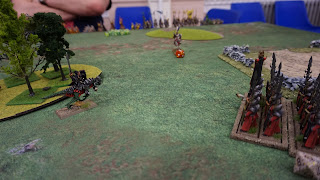 Late game and the Remaining unit of Buccaneers and the Gargoyles managed to kill one unit of crossbows, before the Buccaneers were run over by the Iron Beast.  The Blade Dancers were killed by the Dogs of War and the Dark Elf spears managed to Kill a unit of Household Guard.  My Drake Knights were killed when the human general charged them in the rear as I had forgotten to reform them after destroying the Household Knights.  With that we called it a day as I only had one unit left on the board and it was nearly destroyed, leaving Andy with a solid win.
So our first test of Kings of War went quite well, with Andy saying that, while it lacked the depth of 9th Age and he still preferred that he quite enjoyed the game and would definitely be willing to play it again.  He said that he liked the level in variety in the lists as in 9th Age you can quite often find yourself hemmed into one type of play as nothing else is viable.
As for myself I quite enjoyed the rules, for a few reasons:
One thing we forgot was to disorder units after taking damage in combat, although I don't think it would have made a huge amount of difference to the game.
My main misgiving about the rules has always been the extreme way the turn are done, with one player doing nothing in their turn apart from removing units, but in the end it did not bug me as much as I thought it would and adds another element to game as you try and force put your opponent into positions where he cannot inflict too much damage in their turn.
The game felt like a game of Warhammer, with a lot of the same consideration with regards to positioning, unit facing and trying to manoeuvre for the charge but in a much simpler and straight forward way.  Magic was nice and simple and characters on foot play more of a supporting role rather then being powerhouses able to take on whole units.
All in all I was impressed with the game and will try and make it a regular feature of my Monday night games.
Posted by Kevtheinx at 05:34 No comments:

I have been thinking about giving Middle Earth Dragon Rampant a try fro a while now, and decided that we could give it a bash and use my Haradrim to see how the game copes with them.
I have Oliphant's, picked up from various places and have only used them on the table once. This is largely due to the Strategy battle Game making them virtually impossible to kill, making for some very one sided games.
So I opted to do the charge of the Haradrim at Pellenor fields, from the Return of the King.
I decided that the Oliphant's would be greater war beasts, with a missile attack to represent the archers in the Howdah, and cause fear to represent their size and impact. This brought them up to 10 points. In the end the Haradrrim forces looked like this:
2 Oliphants
1 Heavy Riders
2 Oliphant
2 Heavy Riders
1 Elite Riders
The Rohan force also consisted of two commands, led by Eomer and Erkenbrand:
Elite Riders
3 Heavy Riders with Bows
Elite Riders
3 Heavy Riders with Bows
1 Light Riders
The scenario was very straight forward.  It was a pitched battle, last man standing wins. We included no terrain as the battle was to take place on the Pellenor Fields just outside Minas Tirith.
We made a couple of minor changes (ie I got the rules wrong!) before we started.
We decided to randomise initiative at the start of each turn, with each side then alternating between commands until everyone was finished. We also decided that is an Oliphant started the turn battered and failed to rally rather than retreat it would rampage in a random direction, attacking any unit it contacts. 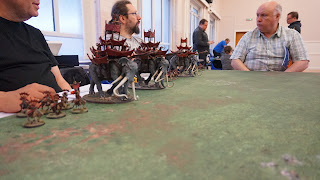 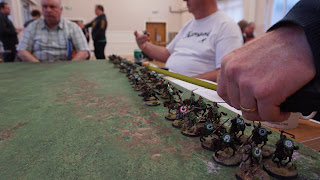 Early game and the Haradrim Left flank and Rohan left flank were both fairly well behaved, with an orderly advance. The rest of the forces were a bit more scattered though, with a disorderly advance from both sides right flanks. 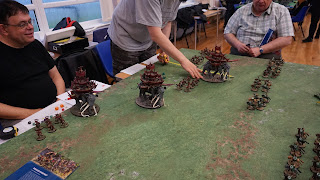 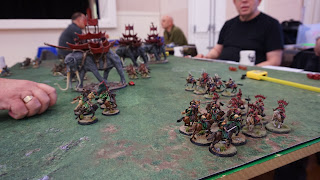 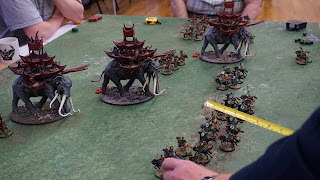 Mid game and the forces of Harad managed to get the drop on the Rohan inflicting some heavy casualties, mainly thanks to the Oliphants and the Serpent King.  there were a fair few failed activations during this part of the game, and in end Eomer and his forces were removed from the game, as were the Haradrim force containing the two Oliphants. 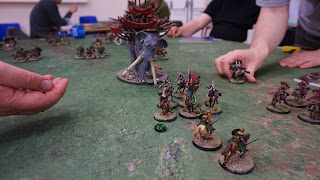 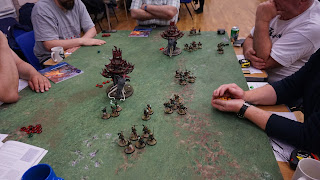 Late game saw the Rohan make a sort of resurgence, with them inflicting heavy casualties, including the death of the final Oliphant. Alas it was not enough to save them from the Serpent King, who managed to remove the last vestiges of Rohan resistance, meaning a Harad victory. 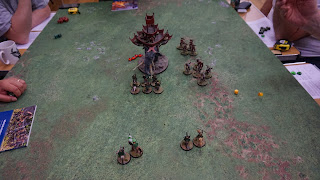 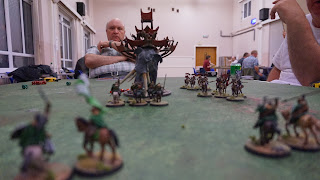 So the Rohan lose (again!). I don't think my Rohan have actually won a game in years.I think everyone enjoyed the game, and it was quite close in the end, however I don't think Dragon Rampant is really suited to this pitched battle sort of game and it would benefit from some other objectives and terrain to liven things up a bit.
Posted by Kevtheinx at 13:33 2 comments: