Why 6.5? THis isn't strictly one of the games that will make up the 10 game campaign. This is a side show to that, where as the victor of lasts week game I had the option to go and raid someone elses camp.  As Dave had the warband with the highest rating and had been rather successful lately I opted to pick on him, in the hope of bringing him down a peg or two.

The scenario was simple.  Dave set up his Marienburgers in the middle of the table, surrounded by treasure tokens and loot crates, and we all deployed round him. Last man standing wins.  Deployment ended up very similar to last time, with my Undead sandwiched between Andy's Skaven mob and Rory's Protectorate of Sigmar, with the Witch Hunters on the opposite side of the table, and Ian's dwarves sandwiched between the Witch Hunters and Protectorate of Sigmar (PoS).

Early game saw the Skaven and undead make a dash for the table, while the Marienburgers tried to exit assault the Witch hunters, who bottled it and decided to hide behind a hill.  The Dwarves began the long slow plod towards the centre, but still managed to snipe the PoS of the table. 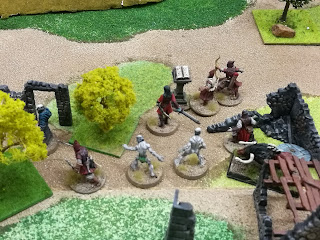 The Skaven and the Undead managed to reach the centre of table, bagging a couple of treasure tokens. The Skaven couldn't decide whether or not to have a bash at my undead or to go after the Marienburgers, trapping them against the Witch Hunters.  They made a half hearted attempt at the undead, but the prospect of trying pass all those fear tests on the low Skaven leadership put him off and he changed direction and went after the Marienburgers.

By this time the fight between the Marienburgers and the Witch Hunters had reached its peak, with the witch hunters taking down a fair few of the Marienburgers but suffering heavy losses in the process, including their ogre mercenary.  The Witch hunters decided enough was enough and called it a night, trying to minimise their losses.  The Skaven then pile in to the Marienburgers, with the Rat Ogre making an awful mess. Dave decided to fight on though and with some lucky break tests managed to fight on. This cost him dear though as by this time the Skaven and dwarfs were upon them and they were wiped out to a man. 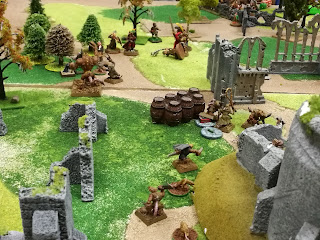 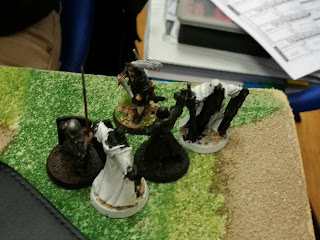 This left the Skaven, dwarfs and undead on the table, and the skaven then decided that enough was enough and also left the field, leaving it to the dwarfs and undead (again). The Dwarfs headed for cover, trying to get into a position where they could use their crossbowman (dwarf?) to snipe at the undead.  They hadn't reckoned on the 18 inch charge of the Dire Wolf though, and it burst from the back of the undead to pin the dwarf missile troops in combat and stop it firing, allowing the other undead to advance, and then charge the dwarf position.  Another dwarf went down to the undead charge and at this point Ian decided enough was enough and legged it, leaving the undead victorious. 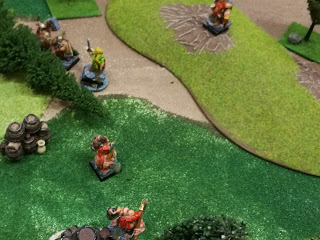 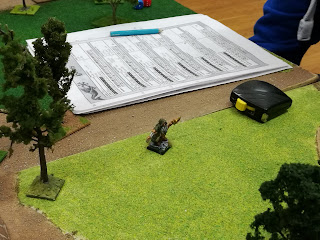 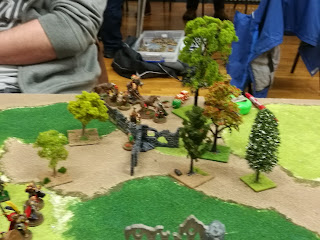 So another win for the undead, more through luck in deployment than anything else.  I ended up between the skaven and PoS. the PoS were out of the game pretty quick and the skaven don't really want to engage the undead, and I'm not fast enough to catch them. This left me in a bit of  vacuum, despite getting into the centre of the board pretty quickly.  Everyone else got stuck in pretty quickly, apart from the dwarfs so once again we were left on the board to fight it out.

I suffered no casualties in this game, and got a good haul of loot so my warband is starting to look pretty healthy again.  Most other people suffered one or two casualties, with the Witch Hunters rather amusingly losing their hard fought for Ogre.

My warband is starting to look pretty good, with the dregs getting quite tough. The necromancer remains a source of embarrassment though as he regularly fails to achieve anything.  We have resorted to sending him to do all the risky tasks in between games, and sure enough while being lowered down a well looking for treasure he picked up a disease and will need to sit out the next game. I'm not sure I will notice him missing, to be honest.

Apart from that the campaign is starting to balance out some more, with Dave's Marienburgers coming out of the game a lot better than they should have considering every model was taken out of action, although his casualties were enough that he warband is now down to a more manageable level. The witch hunters lost their ogre, which makes a hefty dent in their abilities and the dwarfs lost another model, which is keeping them on an even footing.  The skaven remain a worry, as canny use of disposable giant rats are helping to keep them in the campaign. That coupled with their speed and ability to hoover up treasure tokens so they are rapidly moving ahead of everyone else.
Posted by Kevtheinx at 13:23