I finally managed to arrange a game of Otherworld Skirmish.  I received the rules last year and even wrote a review, but have not really had the chance to play them.
I decided that it was about time and opted to do the "Under siege" scenario from the rulebook.
The scenario is fairly simple, an Ogre, Giant and some goblins are attacking and trying to burn a village to the ground. The village itself is defended by a bunch of mercenaries, including all your basic fantasy tropes, so basically a fighter, wizard, cleric, assassin, along with some archers and war dogs for numbers. Also not forgetting the trusty pack mule! 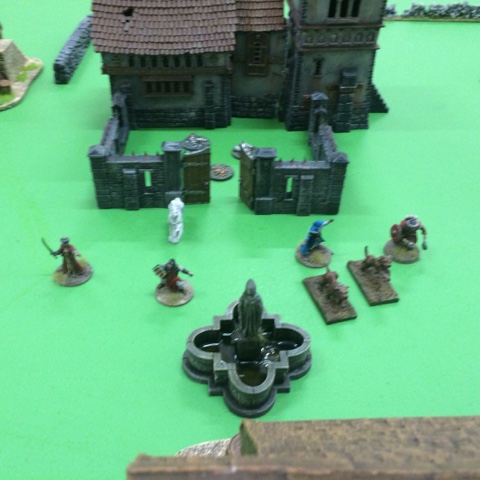 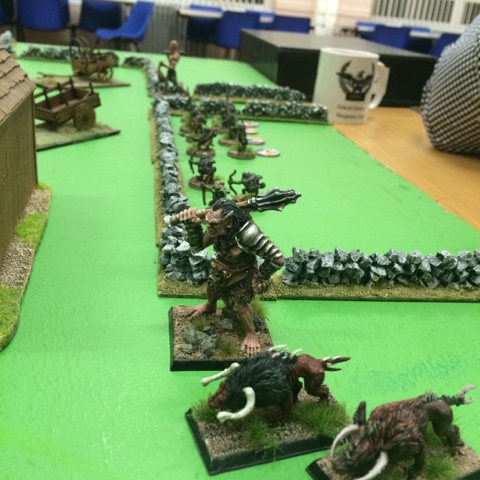 5 of the goblins carried flaming torches that they could use to burn down the buildings in the village.
The night got off to a ropy start as my wife, who works in Glasgow got caught up in all the transport disruption at Glasgow Queen Street station and was late home, meaning I was an hour and a half late to the club.    We managed to quickly set up and although slightly harassed I managed to explain the basics of the game to everyone.
In the scenario there is a small village with a central building, the Black Dragon Inn, and the mercenaries had to deploy within 4 inches of this building, with Dave opting to deploy his three archers within the tower at the top of the inn, and the rest of his band at the Inn's front gate.  The defenders also have eight treasure tokens to deploy, with Dave opting to put the majority of them within the courtyard of the inn, plus a couple scattered throughout the village. These treasure tokens represent various things in the game, and only the attacker is able to uncover them. they could be treasure, which are worth victory points, traps, wandering monsters if any are available or even cards that give re-rolls or other in game effects.
Early game and the Raiders advanced, quickly managing to take out a wardog with a lucky shot from a goblin.  Everyone else tried to close the distance to get stuck in to the treasure and burn some buildings down.  In the game you are only ever able to activate half your force in any turn, plus any extras for having commanders on table.  The Raiders had sixteen models and even with the Goblins mob rule were not able to activate everything.  The defenders had no such problem, as they had two models with the Leader ability and so were able to activate their entire force.  They got some lucky shots and managed to kill the enemy Ogre very early in the game, much to Rory's annoyance. 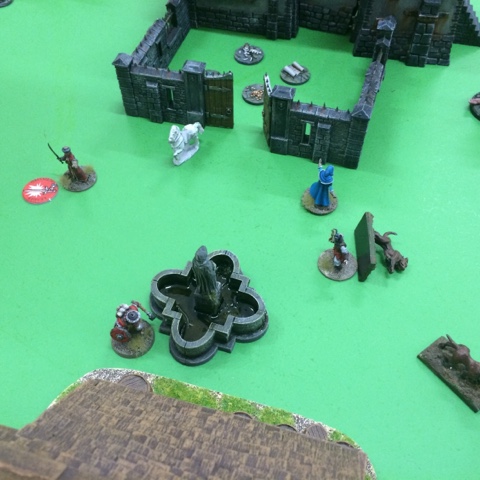 When the giant arrived in mid game the adventurers all had to take Fearsome tests, with some of them failing and acquiring the "frightened" status, which stopped them charging any fearsome models and made them a lot worse in combat.  In return for this the mercenary cleric used his mind control ability to take control of their Giant and a tug of war ensured, with the hapless monster spending several turns running back and forward as both sides tried to force it to do what they wanted. 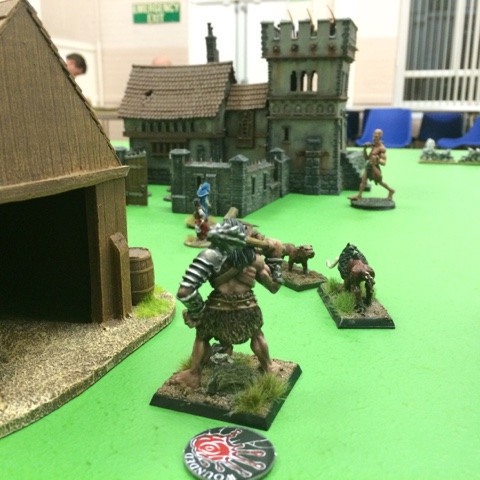 Late game and a small melee took place on the outskirts of the village between the leader of the mercenaries and a Dire Wolf, with the Dire wolf getting the worst of it.  Goblin casualties were also starting to mount, thanks to the archers in the Inns tower.   The Raiders did manage to set the barn on fire, but it must have been raining as it took most of the game to actually burn down, plus they managed to set fire to the Black Dragon Inn itself but it did not succumb to the flames before the end of the game. One Dire Wolf managed to unearth a treasure token, but it never got used as it was a bonus that came into play when a character model was down to one wound. In the final round of the game there was a large melee in the Inn's courtyard, with the raiders coming out of it badly with several dead goblins. 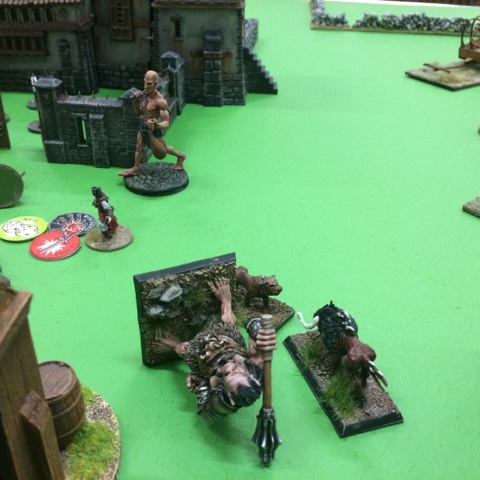 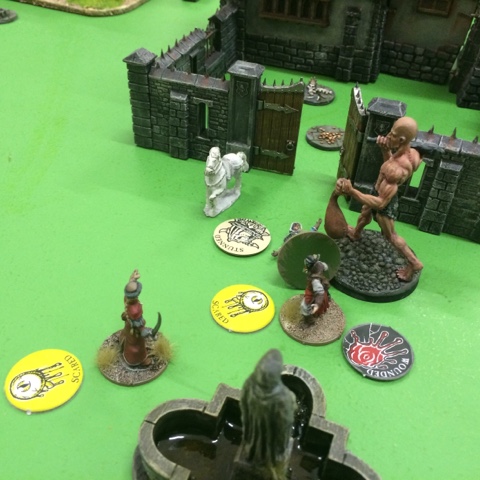 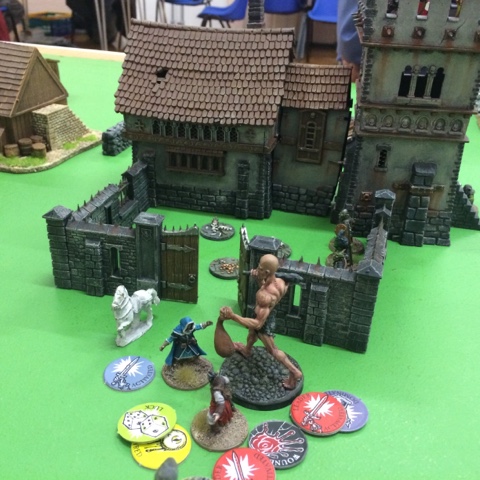 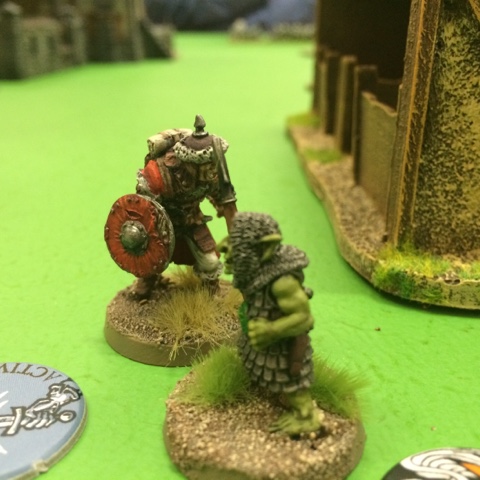 We had to stop at this point as we had run out of time, but the Raiders were close to losing half their models, which would have caused their forces to become shaken, and possibly start leaving the table in panic.

All in all not a bad first attempt, considering how harassed I had been trying get to the club, and given more time we could have played at a more leisurely pace, rather than the slightly hurried game we had.


It played pretty much as I expected, and there were a lot of tokens in play at any one time, especially when the Giants fearsome came into play. I think this game re-enforced what I thought when I read it, in that it will be suited to a narrative style of play, with a GM setting the forces and scenarios rather than pick up and play type games where each player can just pick a force to an agreed value and have at it.  This doesn't bother me though as the main reason I bought the game was to use it for themed scenarios. My only gripe would be the number of tokens in play at any one time, and the difficulty in removing some of the status's from your models as quite often you roll a die for each hit you have remaining, but you need to roll a 6 so that could be a real pain in game.
I will press on with my plans for a themed set of games, using Goblin and Halfling characters, with some occasional monsters and adventurers for flavour and see if there is any interest.
Posted by Kevtheinx at 06:28