Turn 2 of our campaign has concluded, with 2 actions.

Dave's USA 2nd Platoon decided to take a turn out to regroup and tend to their wounded, while the 3rd Platoon under the command of Alex had another pop at Ophove.  Meanwhile Ian had led the USA 1st PLatoon on a flanking move under the tunnel at teh railway, before being intercepted by my German 1st Platoon.   The reports from these two games are below:

From the campaign GM ate the start of turn 2:

Ok having now checked with Ian, David, Alex and John, it looks like Campaign Turn 2 will see a pause at Arques while David's 2nd American Platoon tends to its wounded and John busily strengthens his defences for a Delaying action scenario to be fought in Turn 3.
Meantime Alex and his 3rd platoon is planning to return to probe the German defences around Ophove and take on Ken's German platoon once more.

Elsewhere the German CO and 1st Platoon commander (Kevin) has received word from his scouts of American infantry appearing North of the canal as Ian's American platoon infiltrates its way through the tunnel under the canal just south of Las Fontinettes. So a probe scenario will be fought here. If the Germans are successful they may well want to mine or booby trap the tunnel to prevent its future use by the Americans. However, if the Americans win they will have established a potentially useful toehold North of the canal for future exploitation. All to play for then.

The Americans tried to probe their way through the German flank last night, encountering the German 1st Platoon in the process.

The Americans made some early gains, almost succeeding in their mission in the face of a disorganised and inaccurate German resistance. Casualties were looking to be light on both sides until one US squad got a bit gung ho and decided to assault a German squad that was entrenched in a farmhouse, commanded by the Platoon Senior Officer. The US were repulsed with very heavy casualties and decided to then withdraw and find another way North.

Lindeman continues his run of keeping his men alive, but mainly due to very bad luck from Ian who accidentally wandered his squad of troops into assault against an entrenched German squad.

Feldwebel Willi Beier begs to report
Third platoon continues to hold its position in the village of Ophove, once more the Yankees came on in some form of frontal assault, our platoon had been reinforced with a tripod mounted MG42 dug in to a good fire position on our right flank, a squad of the enemy advanced across open ground to their front from a hedgerow and disappeared from view, but a second squad were spotted behind the same hedgerow and were effectively engaged by our fire and they didn’t move from that position for the duration of the battle.
On the main street leading through Ophove one squad took up position between the houses, a second squad deployed in a house across the street from them, the Americans advanced bunched up one squad following behind the other. They were engaged with effective fire from both squads MG42s and rifles, the Americans appeared to dither and although they returned fire they remained static in the open and were decimated by our superior firepower.
Having taken substantial casualties they withdrew, our third (reserve) squad had only just arrived in the village and were not engaged in this action.
Result:
USA: casualties inflicted but numbers unknown (awaiting Ecks report)
German forces: 1 man killed, 1 man wounded (will miss next game)
C.O.s opinion +2 (total 3)
Men's opinion +2 (total 4)

Report from USA 3rd PLatoon of the same action:

Combat report from Ophove....We had 1 squad of reinforcements for this action, who were involved in the main assault.When the action started 2 squads started moving forward to the village, with the intent of one squad storming and holding a house on the outskirts, while the other veered of across the road towards a small copse before moving to a flanking position to attack the huns.
The 2nd squad did'nt have the legs to reach cover during their first bound and got caught in the open by an MG42 and 1/2 in. squads, their reaction was to go to ground and stay there. The first squad in the mean time charged towards their intended target, and for some unknown reason swerved at the last moment and ran around the building and ended up between the Germans and 2nd squad. They managed to get one volley off before the enemy returned fire. They were so shocked by the heavy return fire the Germans got in another volley before they could react.
The Plt officer and 3rd squad were in light cover behind a hedge with the intent of providing covering fire on another MG42 covering the left of the village for the squad assaulting the house/s. When the assault was aborted they decided to continue with the covering fire, instead of moving and providing cover for the 2 assault squads, this decision led to them withdrawing with severe losses. Due to bad communications a light squad held in
reserve were not used.

Campaign Map and Platoons Status at the end of Turn 2: 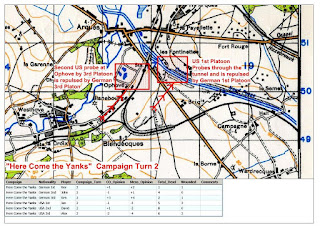 Email ThisBlogThis!Share to TwitterShare to FacebookShare to Pinterest
Labels: Chain of Command, Here Come the Yanks, Too Fat Lardys