Stepping through the Breach

Its been a while since I have tried anything new, and I had the opportunity to give Malifaux a bash.  I have been eyeing up the models for a while as I quite like the Tim Burtonesque vibe they have got going for them. I haven't jumped in mainly due to a lack of players coupled with the steep cost of the miniatures making it a risky investment.

I promised that I would never get involved in that boutique style of game again after realising the amount of Urban War models that I have gathering dust in the man cave.  Luckily there are already a few players and a couple more that are interested in jumping in.  Certainly enough potential players to mitigate the risk of the investment in money and (more importantly) painting time.

My second game was to be against Andy, who was trying the game for the first time, against me with the vast experience of my one previous game!  Alistair was supplying the toys for both sides and giving Andy some much needed assistance.

I opted to take Lilith fro the Neverborn, which are basically the original monsters that inhabited Malifaux before the humans arrived. They basically hate the invaders and want rid of them.  Andy had Mei Fang, who works for railworkers guild (or something Like that!).

The good thing about Malifaux is that the victory conditions selected from a few options at the start of the game, with each player potentially having different ways of earning victory points.

We played with force sizes of 35 soul stones, which is ideal for beginners.
I opted for:

I cant quite remember what was on the other side but it contained: 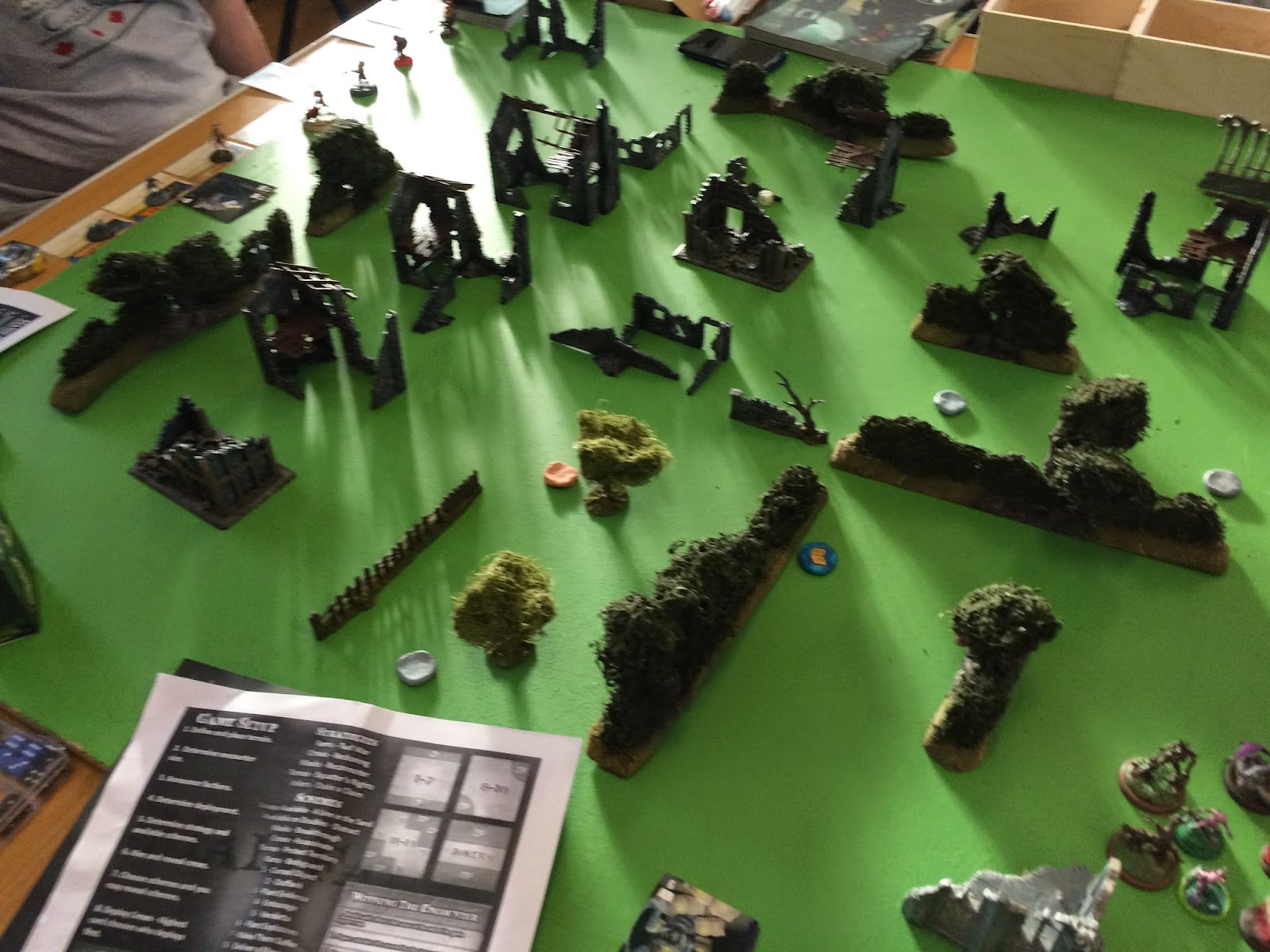 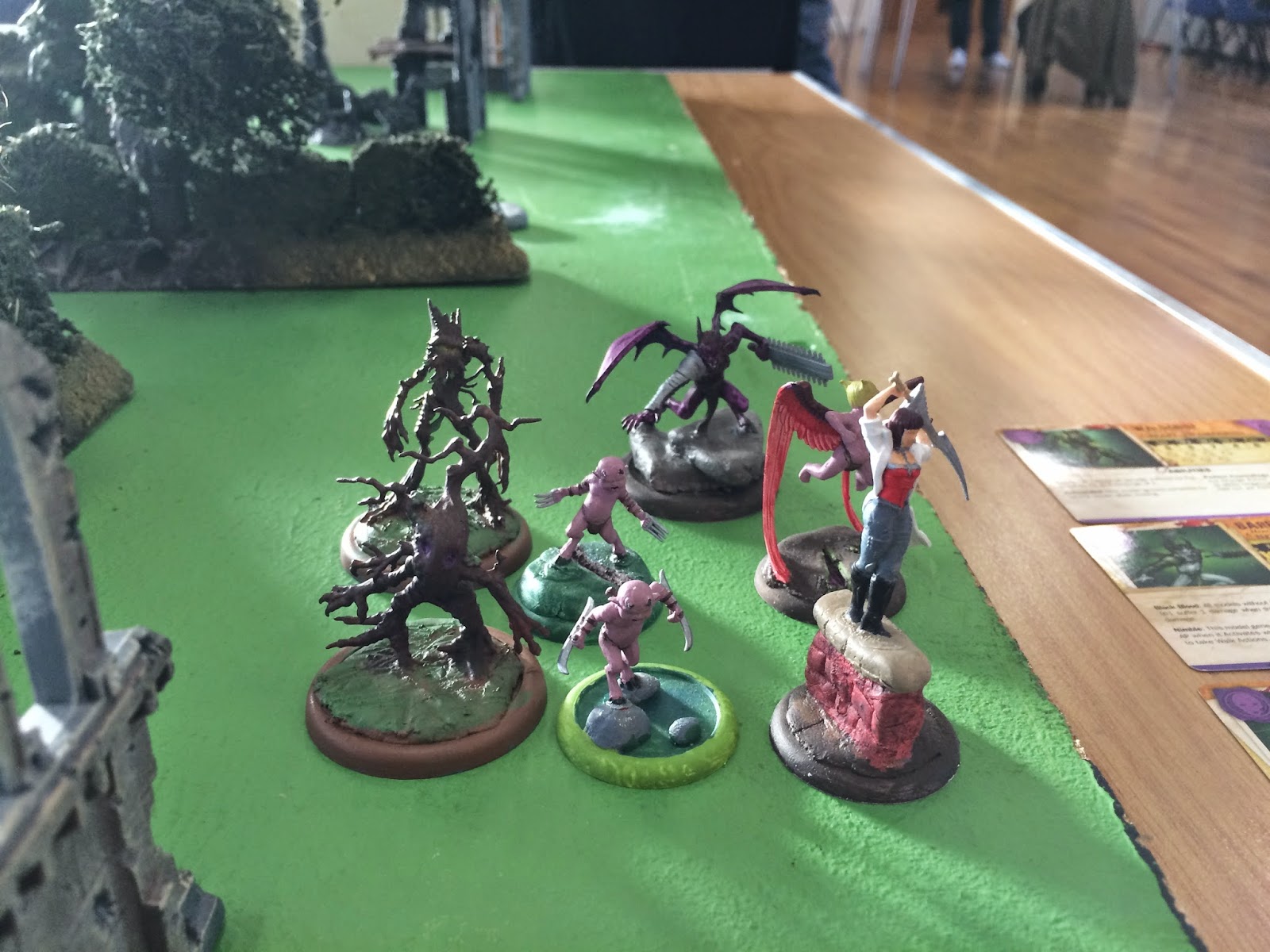 The victory conditions have two elements. There is a randomly generated strategy, which applies to both players, and then each player secretly selects two schemes that they are trying to achieve. Succeeding in Strategies and schemes earn you victory points, with the player who has the most at the end of the game being the winning. The strategy we ended up with was to basically to kill as many of the opposing gang in the game, which was nice and simple for a first game. I opted for two fairly simple schemes, the ritual and hold the line.  For the ritual I had to get a marker in each corner of the board, and for hold the line I had to get four markers along the centre line of the board.

The game got off to a quiet start with my motley crew of monsters advancing, while Lilith and the Waldgeits summoned as much cover as possible while the rail crew advanced from the other side of the board. I sent my terror tots to the corners to start dropping some markers, while Andy tried to close the distance.

In turn three all hell broke loose as the two crews engaged each other.  We both tried ot do as much damage as possible, with Andy's gang being much more direct in its approach. I tried to isolate and confound my opponent and I think I succeeded up to a point.

Casualties were fairly light up until that last turn of the game where I managed to finally kill Andy's crew leader and a few other of his models, while narrowly avoiding the Loss of Lilith (by the skin of my teeth!). 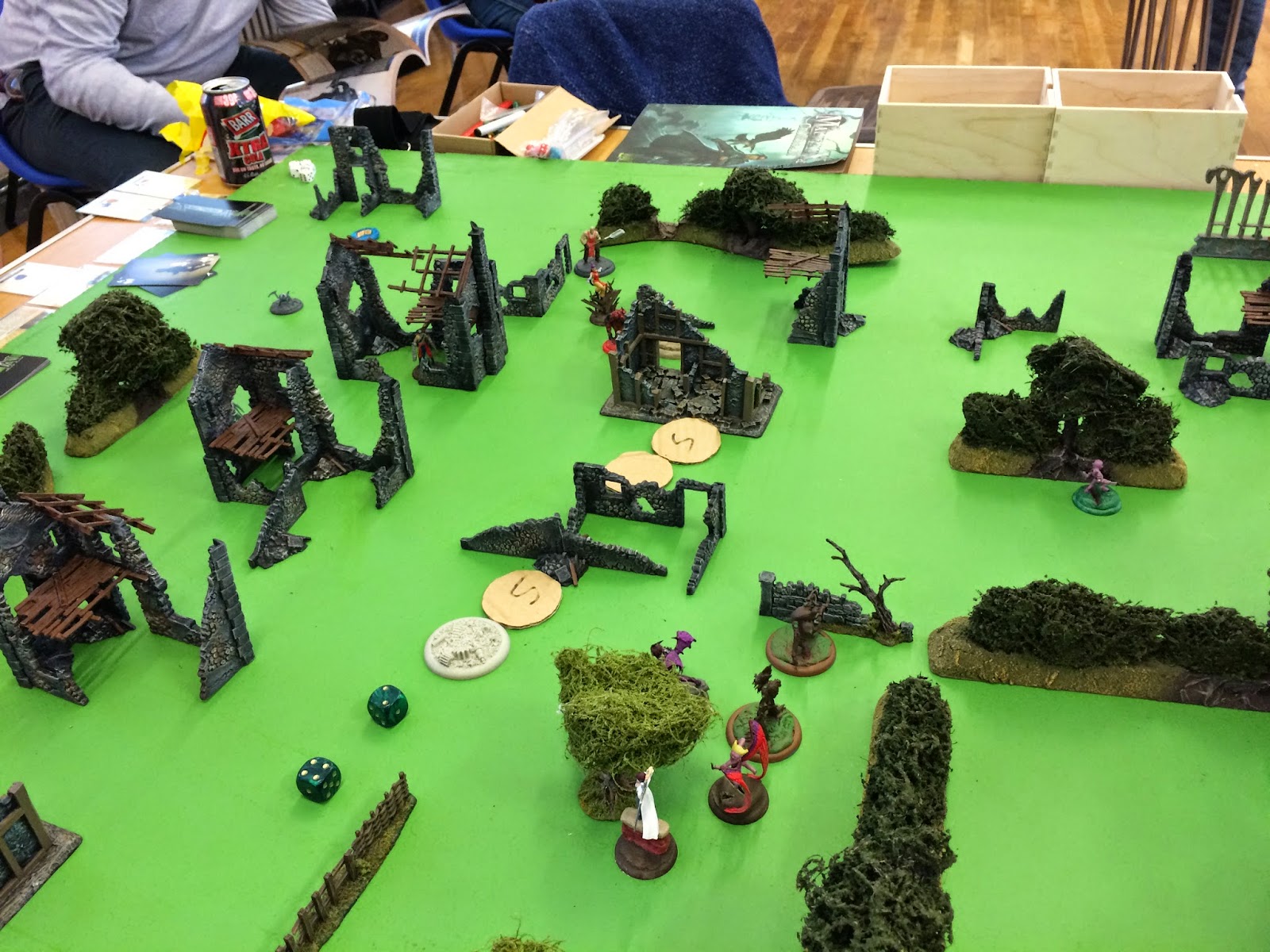 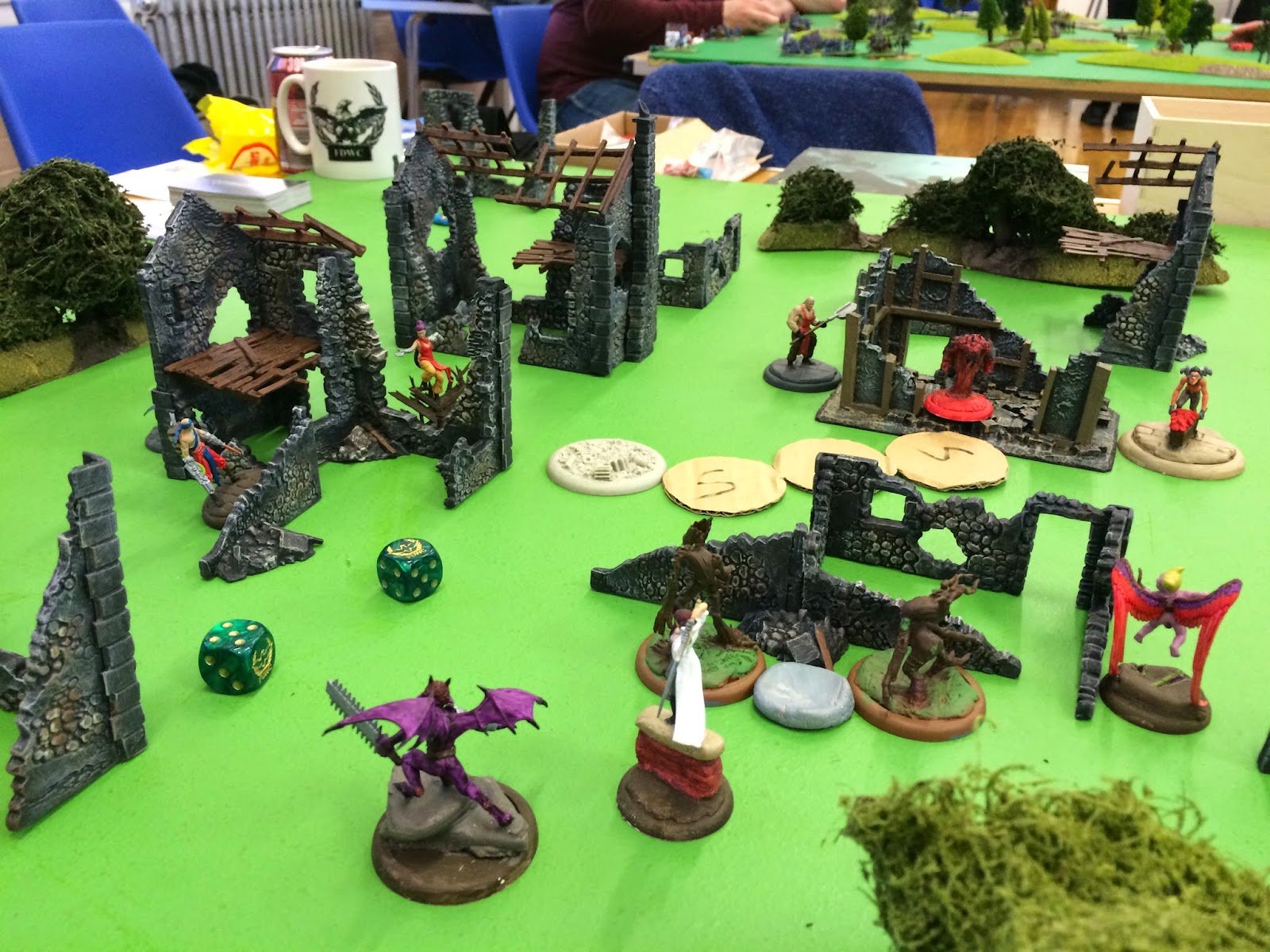 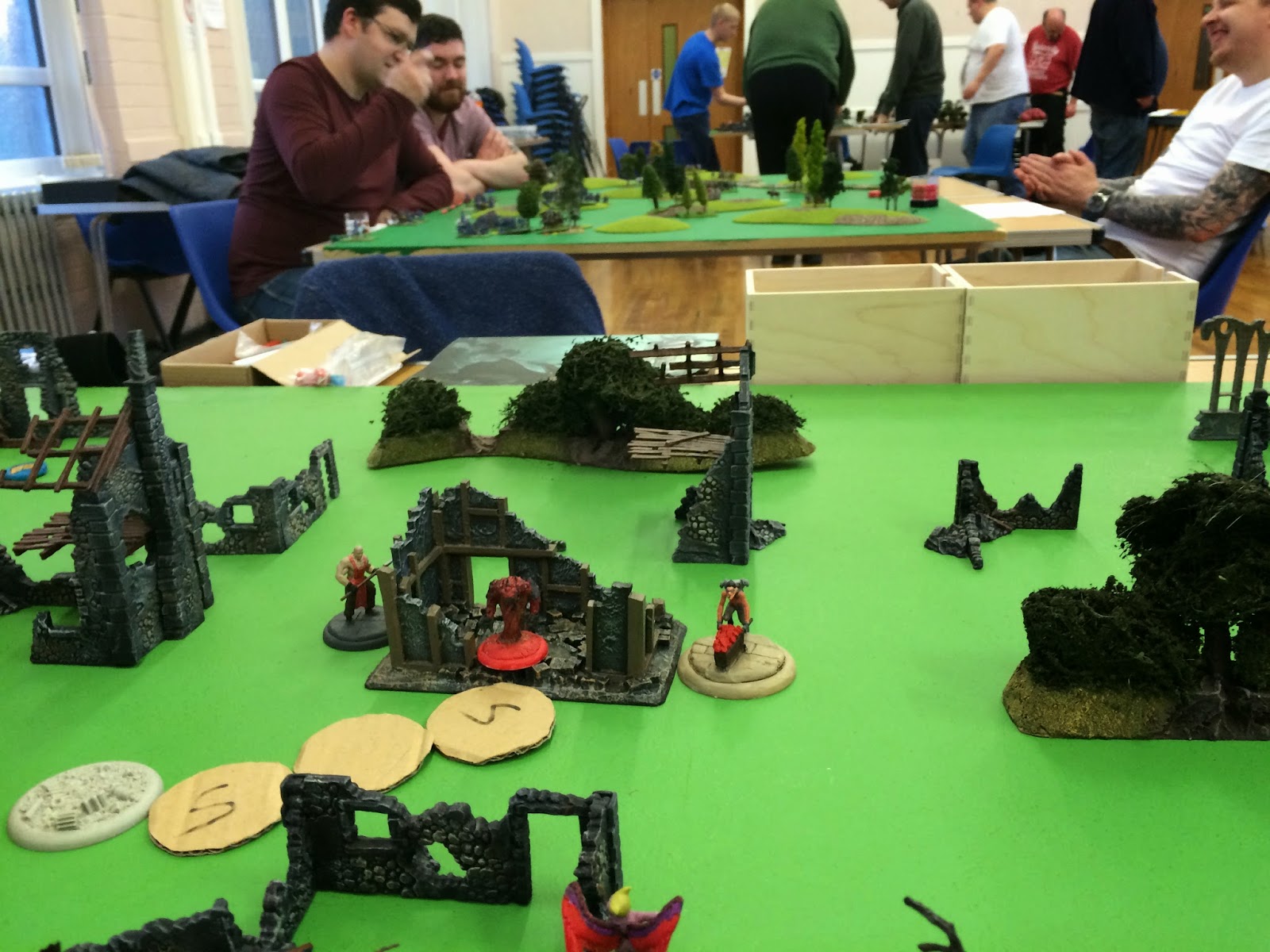 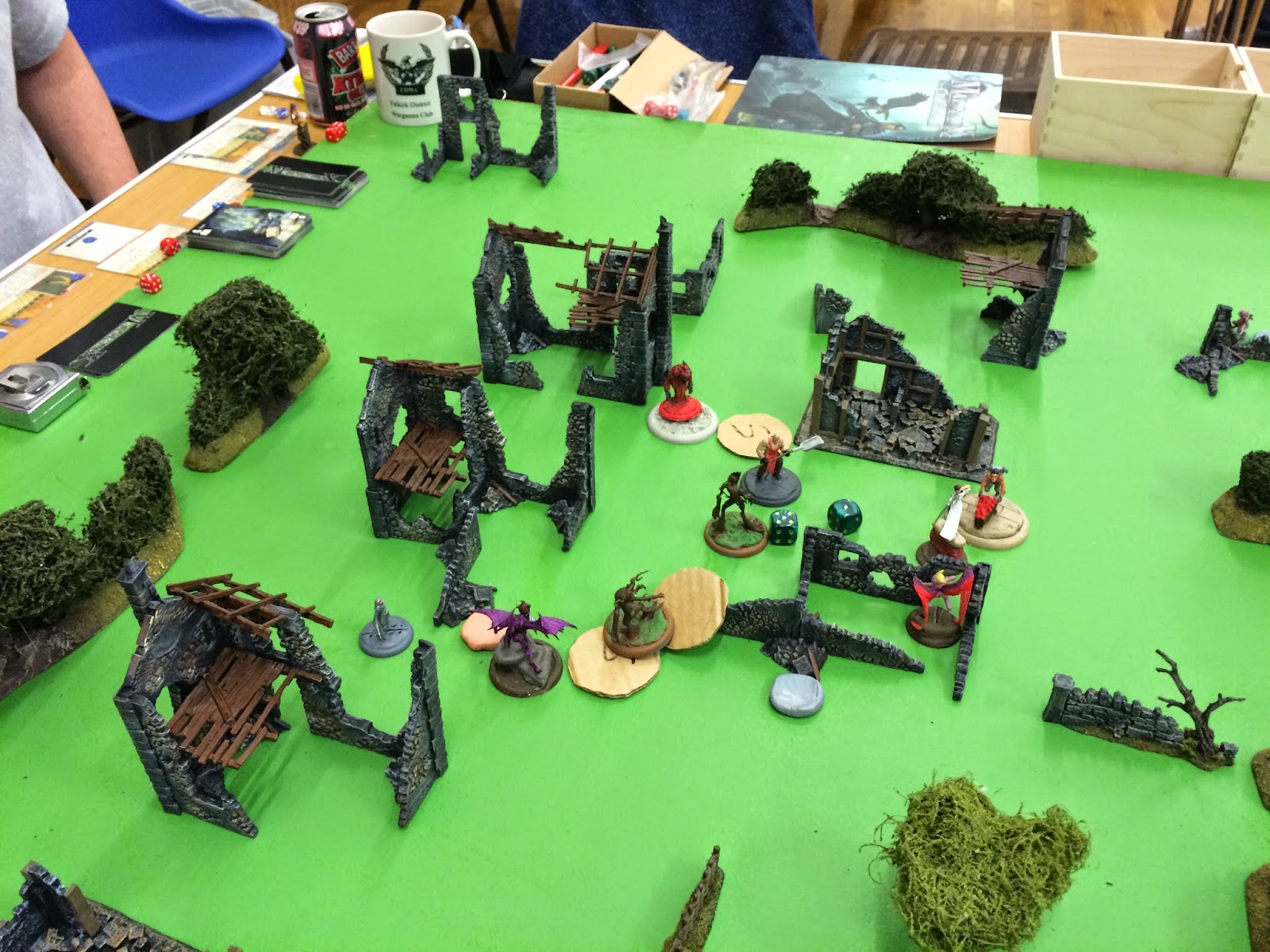 All in all an interesting, if slightly confusing evenings gaming. Malifaux is quite a dense game with a steep learning curve.Each model has a long list of different abilities, most of which have the ability to be improved or synergise with other models in your crew. It helps keep the game interesting as there is lots to learn.
I also quite like the idea of the fate deck being used rather than dice as it adds another twist to the game.  There are only so  many high results in a deck so it becomes a game of odds as well, as if you draw out the high cards early on in a turn then it will limit your chances of success later on.

I have acquired a copy of the rulebook from e-bay and it was an enjoyable read, and will probably jump in and get a few bits and pieces as well.  The Neverborn at the moment seem the most interesting as the range of models is quite good and the abilities of the models set them apart from most other wargames.   So another game tried, and looks like another game added to the repertoire!