No posts for a while as the lighter evenings have meant out cycling rather than being stuck in teh house in front of a PC.  Trying to catch up a bit now though.

Campaign Turn 1 of our Chain of Command campaign has finished, with some mixed results: 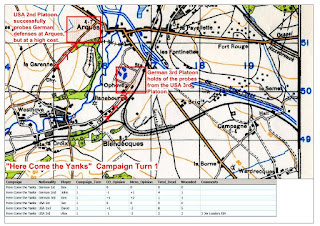 Report by Feldwebel Willi Beier 'commanding third platoon'
Third platoon set up defensive positions in and around the village of Ophove erecting barbed wire obstacles across and around the roads that were the most likely axis of the advancing Americans, 1st squad commanded by Unteroffizer Rolf Steiner deployed in the village on the left flank where he was joined by Feldwebel Willi Beier ‘the platoon leader’ over on the right flank on the outskirts of the village 2nd squad commanded by Unteroffizer Rudolf Krebitz deployed behind a hedgerow that ran along into a small wood, this position giving them cover and good arcs of observation and fire.
The yanks were detected moving cautiously forward they used the cover of woods and the thick hedgerows to close up on Ophove, seizing the initiative they called for mortar support and 2nd squad came under fire ‘a few random ranging shots’ then a hail of small arms fire was unleashed, krebitz and his lads immediately returned fire targeting the woods to their front and a hedgerow beside the road to its rear, hits were scored and one of the GI NCOs was seen to fall when hit.
Over on the left flank a squad of Americans poured out onto the main road and charged towards the village, 1st squads LMG team were on overwatch covering this road and immediately opened fire, however despite being presented with a massed target of infantry confined between two tall hedgerows the German fire was spectacularly un-impressive and the yanks charged home. A vicious hand to hand combat was quickly and savagely resolved the Americans having charged sixteen inches came up against a full squad of Germans that included a junior and a senior leader both armed with machine-pistols, three Germans went down but twice that amount of GIs fell and they rapidly withdrew back down the road that they had just charged up, leaving there casualties and a shiny new BAR lying at the side of the road.
Some sporadic exchanges of small arms fire continued over on the right flank resulting in one of 2nd squads LMG team being hit, the Americans were observed moving about and an officer was seen running round rallying his men? ‘headless chicken syndrome’ but no further attempts were made to advance on the village, with the Germans still holding their position they claimed the victory, 3rd squad having been held back in reserve had a brew on the go and brought forwards a mess kit full of ‘Ersatz Coffee’
Result:
USA two squad leaders (corporals) and five GI casualties (3 killed) C.O.s opinion -1, men’s opinion -2
German four casualties (2 killed) C.O.s opinion +1, men’s opinion +2

Report by Leutnant Franz Beckenbauer commanding 2nd platoon
The platoon set up with 1st section on high ground on the right flank of the village of Arques and the 2nd section behind hedgerow in front of the village. 3rd section was positioned in the village itself. The Americans advanced through the wooded area to the south of the village with two sections forward and ran into heavy fire from the German forces, taking heavy casualties, particularly the section advancing towards the high ground. The American 3rd section advanced to support this section and their combined fire managed to pin the Germans 1st section. Meanwhile the German third section was laying down heavy fire along the entire front. The Americans continued to take heavy casualties but a lucky ricochet wounded Obergefreiter Gerd Muller commanding 2nd section, knocking him unconcious and putting him out of action for the remainder of the battle. Both sides continued to exchange fire but despite taking heavy casualties, the remnants of the initial Amarican section on the German right flank held it's nerve and, taking advantage of the cover provided by high ground, managed to outflank the pinned German 1st section and reach the main road
Result:
Americans suffered 17 casualties (7 or 8 KIA - all G.I.s) C.O.s opinion +1, G.I.s opinion -2
Germans suffered 8 casualties (4 KIA - all Grenadiers) C.O.s opinion -1, Grenadiers opinion +1

So a mixed bag, with the Germans losing one game but inflicting massive casualties on the Americans, causing them to pause and regroup allowing 2nd Platoon to dig in, while the third platoon successfully held and will attempt to hold off the Americans in turn 2. Meanwhile 1st platoon under the command of the whily old veteran of the war, Ltnt Linderman will investigate reports of Americans being spotted just south of Las Fontinettes, leaving all three PLatoons committed on both sides.
Posted by Kevtheinx at 14:27

Email ThisBlogThis!Share to TwitterShare to FacebookShare to Pinterest
Labels: Here Come the Yanks