So this week we had a go at Sword and Spear, which is a fairly recent set of ancients rules.

I have a decent sized Late Roman army, based for Impetus and Impetus has been a bit quiet at the club of late. I was looking for another set of rules that would allow me to use the same bases, and Sword and Spear seemed to fit the bill.
I used my troops as Sub-Roman British, while John brought his Picts, supported by some Saxon and British Allies.
I looked at what I had a cobbled together a force for my first game, totalling 10 infantry units and 4 cavalry, while John brought 3 cavalry units and about 15 infantry.  I had the better cavalry and some heavy foot, while john had lots of troops, many of which had the impact rule.

The main thing that differentiates Sword and Spear from other games if the way the units are activated.  At the start of the turn you take one coloured dice for every one of your units, and one different coloured dice for every one of you opponents units and place them all in a bag.  The game turn is then broken into phases, and at the start of each phase you randomly draw 7 dice, and hand the amount of relevant coloured dice to each controlling player.  The player with the most dice becomes the active player, who then takes his dice and rolls them.   The controlling player can then take these dice and put them against units so that they can be activated, as long as the dice roll is equal to or exceeds the discipline value of the troops you wish to activate.  The other player then does the same.  After this you will be able to see which troops will be activated in the current phase.
Once the dice are assigned you start activating your troops, starting with the lower dice roll and working your way up until everyone has been activated.  Troops complete their actions when they are activated, including concluding any combats before moving on to the next unit.
After everyone who has a dice assigned to them has been activated you draw another seven dice, and do it all again. You repeat this until all the dice are used then put them all back in the bag (minus any casualties) and do it again next turn.  Quite clever but requires a lot of thought and makes co-ordinating your troops a bit tricky.

Dave and I opted to hang back and let the Pictish hordes come to us, while trying to turn one flank with our superior cavalry.  We held our ground and let them advance, and when the moment came Dave sent the cavalry crashing into the Pictish Flank.  With 2 hard hitting units charging in we thought that we would make an impact but to sets of fluffed dice rolls later and our mighty charge had splutterd out, having virtually no impact on the game. 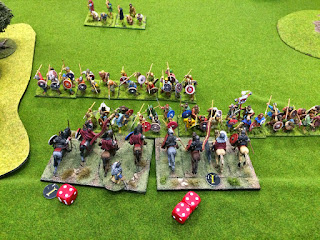 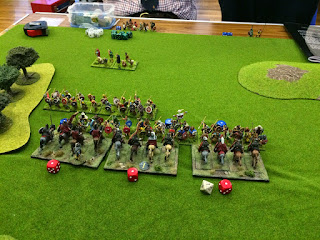 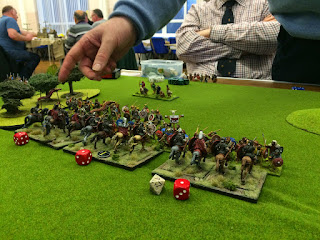 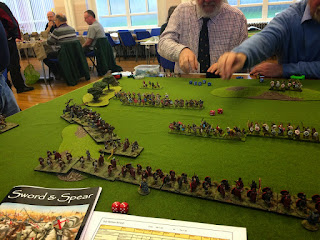 In the centre the Pictish line advanced and John got lucky with his activation and managed to attack my lines with virtually all of his troops at once.  A massive melees erupted in the centre, with no side gaining any advantage in the first round of the combat. 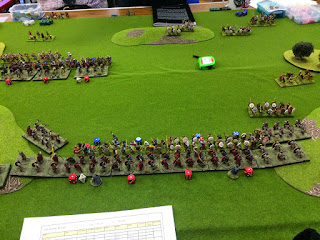 At this point both sides were committed to the combat and almost everyone’s dice were getting used ti instigate combats. The cavalry managed ot inflict some damage, but certainly not enough to be worth their cost! In the centre some rather unfortunate dice rolling saw the Romano- British line start to crack under the pressure, before we ran out of time.  We declared a winning draw for the Picts, but in reality it just a matter of time before our forces were destroyed. 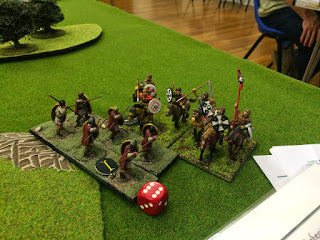 So an interesting game, with some pretty awful combats from our side.  All in all I enjoyed the game and there was lots of thinking to be done about how best to manage a limited resource, which always makes for an interesting game.  I will definitely give it another go soon, as one game is never enough to get an idea of how good a game is, and I am always looking for an excuse to get my Roman army on the table.

Next week we are back to Necromunda.  I know I said I was unlikely to play any more but I decided that sa I had signed up to the campaign it was only fair that I see it through to the end.
Posted by Kevtheinx at 13:13

Email ThisBlogThis!Share to TwitterShare to FacebookShare to Pinterest
Labels: Sword and Spear