Another 48 Hours in May Campaign Turn 1

The results of Campaign Turn 1 for the Earky War Chain of Command Campaign:

The German Probe at Ophove:

The German force probed through Ophove and successfully completed their mission. The French (under Barry) fell back to the bridge with the Germans following up so no combat for either in turn 2 of the campaign.

German Casualties were 7, with 3 dead and 4 wounded recovered to be available for turn 3. The CO's opinion of my officer is now +2 and the men's opinion +1.

French casualties were 12,but reinforcements replaced 4 of the 6 dead and the 6 wounded have recovered and are available for turn 3. The Co's opinion of the French Officer is -1 and the men's opinion -2.

I took an armoured car and a flamethrower as support, Barry took 2 machine guns. Apologies to Barry as I did not realise the limitation on 3 shots for the flamethrower. The excess casualties caused were reinstated. I was particularly lucky to get the only double turn of the night as one of my squads approached the table edge and it just managed to sneak over by a couple of inches on its second move.

The German Probe at Arques:

Somewhere on the outskirts of Arques the German advance was trying to be sneaky by coming up on the one side of the board and nearly made it to the baseline before the British Patrols encountered each other. Thankfully for the British a line of Barbed wire had been set up to block any infantry trying to come through on the flank and thus it was that the game started.

The German advance was stalled by the barbed wire on the flank and they started trying to come round on the far side whilst thier armoured car came down the road towards Arques. The British squads started to deploy within the houses on the edge of the village/town? and along the walls and hedgeline of the fields approaching the village. The Germans caught behind the barbed wire were eventually slaughtered by weight of firepower, while the armoured car retreated under the weight of lead pinging off it's hull. Those forced to come down the road didn't fare much better as the turn ended and the British kept pouring fire into them as they ran across the open road.

Eventually it was all too much for them and the German infantry followed thier armoured car back up the road. 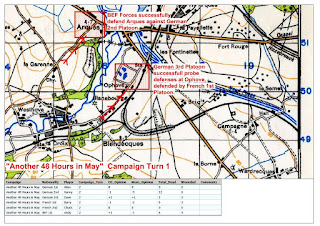 So going into Campaign Turn 2:

The German advance has been stalled in the North around Arques but has pushed through at Ophove where the French defenders have traded ground for time to recover their wounded. They have fallen back to defend the bridge over the canal while the Germans advance in the centre.

Attention will now switch to the south where the German 1st platoon (Allan), attempting to circle round the French defences and probe towards the tunnel under the canal, has encountered the outposts of a second French platoon (Chuck). Campaign turn 2 will see these two platoons clash in a Probe scenario. Meanwhile up North the initiative lies with the British who can choose to strengthen their defences around Arques while the Germans will have to decide whether to press the attack again in Turn 2 or wait to recover their 7 wounded.
Posted by Kevtheinx at 14:36

Email ThisBlogThis!Share to TwitterShare to FacebookShare to Pinterest
Labels: Another 48 Hours in May