Rory and I had decided last week to have a game of Lord of the Rings, GW's excellent skirmish game.  We did not decide on an actual scenario so this Monday I turned up at the club with everything LOTR related that I own.

After a bit of chat we settled on the "Wrath of Rohan" from the The Two Towers scenario book. This is the part of the book where Eomer chases down and destroys the Uruk Hai and Orcs that had abducted Merry and Pippin at Amon Hen, and where the two Hobbits escape into Fangorn Forest, and eventually make contact with Treebeard, which ultimately leads to the demise of Saruman at the hands of the Ents.

We tossed a coin for sides and I ended up the forces the darkness, while Rory ended up in charge of the heroic Rohirrim, led by the Third Marshal of the Riddermark.

As always in LOTR SBG the good side had priority on the first turn and Rory opted to be cautious and do a small advance to allow for some shooting.  This proved pretty effective with some decent early casualties on the Orcs.  The return fire from the Orcs was not quite as effective, only managing to down a couple of horses.

Turn three saw the Roahn crash into the Orc lines on both sides, with pretty devastating effect. 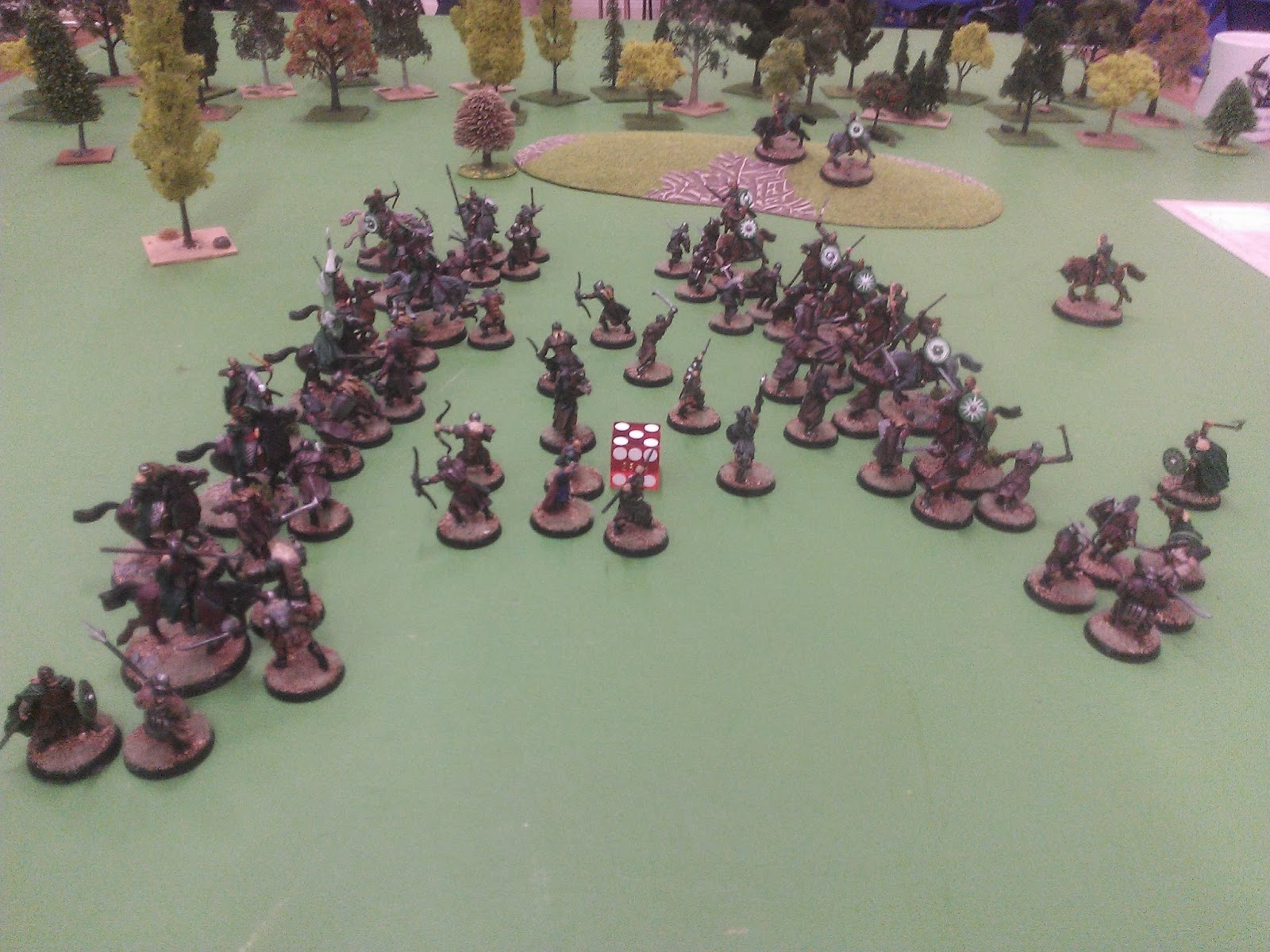 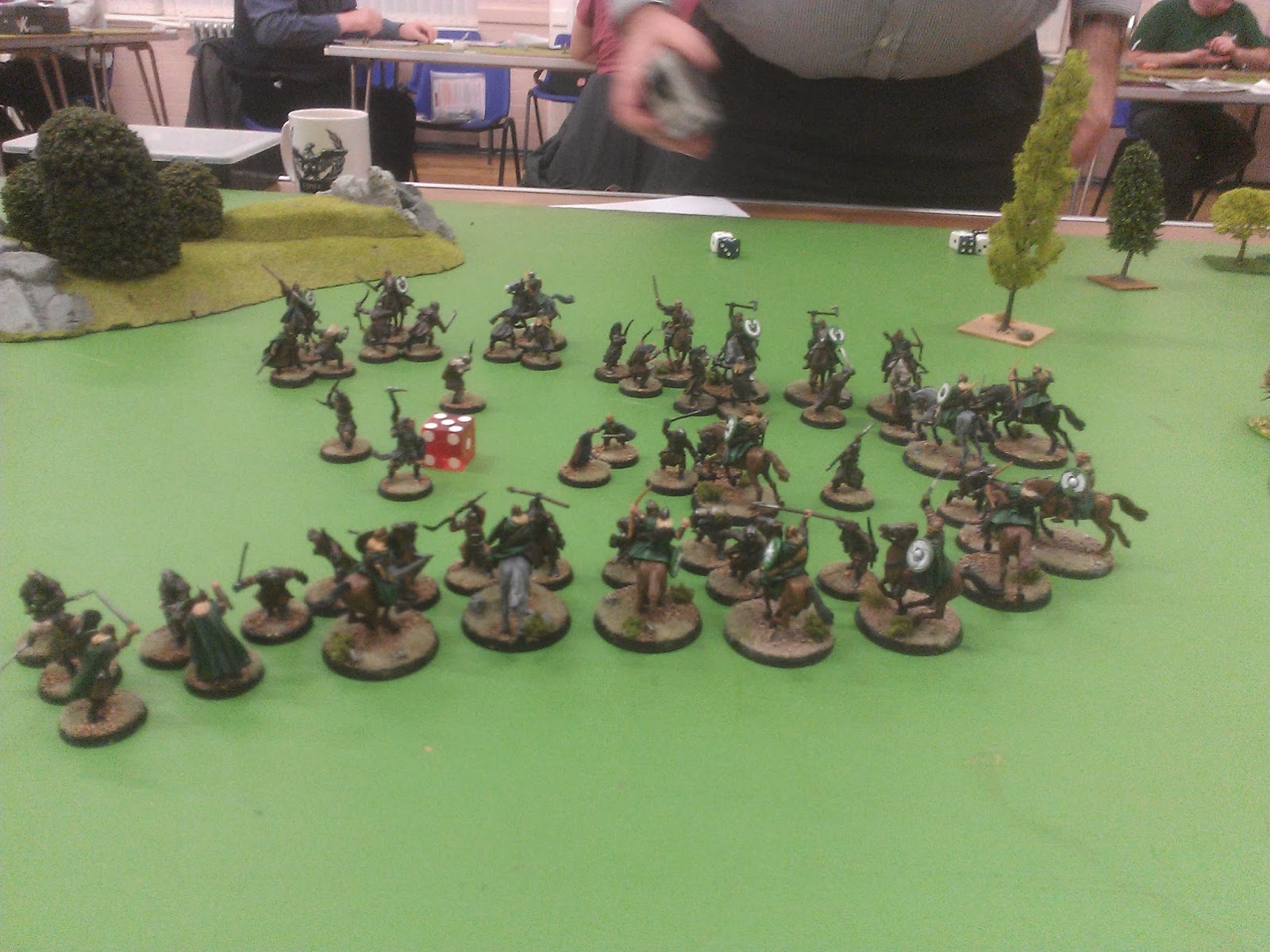 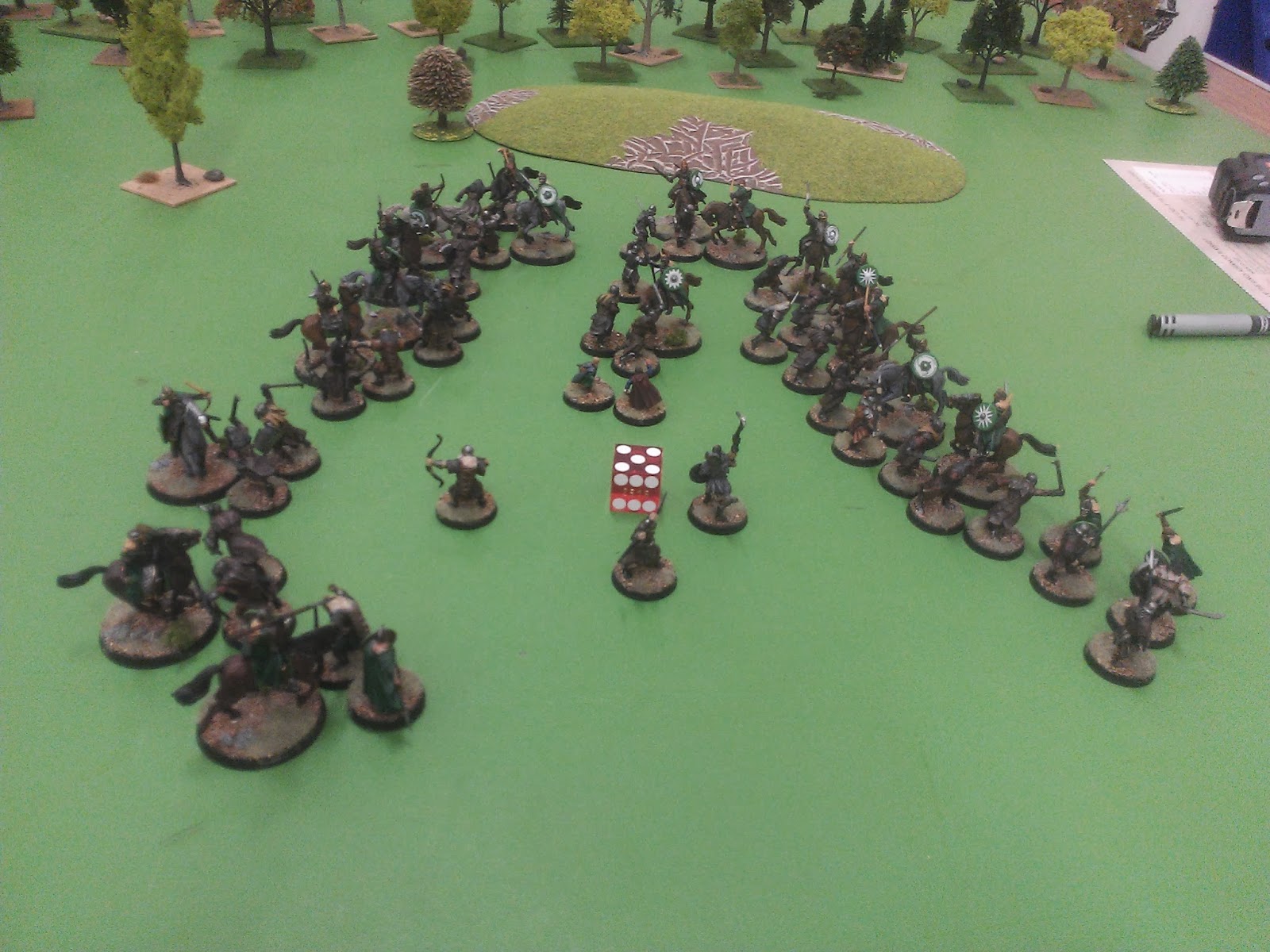 There was not much in the way of sophistication in this game, with the Rohan basically getting stuck in and the Orcs doing their best to survive.  Casualties mounted fairly steadily on both sides until we reached break point.  This is where the bravery of the Rohan came in as they passed all their 'Stand fast ' tests and not a man among them fled the field.  the same could not be said of my orcs, as first the cowardly Grishnakh fled the field, swiftly followed by that entire flank.  I think something like 10 orcs failed their stand fast tests in that single round.

In the end the high moral helped and the orc force slowly disintegrated into nothing, until eventually only Ugluk and a single Mordor orc remained.  Ugluk was dully flattened by an enraged Eomer and the last orc fled the field.

There was some discussion over the victory conditions as both sides had two goals.
Rohan had to wipe out the enemy completely and get the Hobbits safely of the board into Fangorn Forest.  The evil side had to retain control of the Hobbits and reduce the Rohan force to under 25% of their starting numbers.  Rohan succeeded in wiping out the orcs and the orcs succeeded in reducing the Rohan numbers.  Unfortunately the Hobbits had failed to escape the board, but were also roaming free so neither side had succeeded there.  In the end we settled for a draw.

Another great game of Lord of the Rings, and a very close one as well.  I class myself as a novice at this game as I don't get to play it half as often as I would like. There seems to be a lack of interest these days.  Next year I am hoping to expand my LOTR collection beyond the Isengard/Rohan section of the book and have enough to do most of the scenarios involving The Fellowship of the Ring. This will mostly involve scenery, with a few extra models needing painted as well.

THis week the club was quite quiet, relatively speaking. There were only about 25 attendees!  A short time ago that would have been a pretty good club night, but at the moment we have a high membership and the new members have brought a new energy to a Monday, not to mention a new range of games to play.

No firm game arranged for next week, so will need to wait and see what I end up playing.
Posted by Kevtheinx at 15:23