This weeks game was a wee bit different.

Dave Imrie (of Saxondog) and friends came through to give a run through and playtest of the new rules that they are working on, called Hollow Crown. They are supposed to recreate battles for the 14th century.

There were six players altogether and I was slightly late (as usual) so ended up on the Right flank of the Scots force, commanding two schiltrons, a unit of archers and some skirmishers. In a stroke of luck I managed to get a commander of excellent quality. which was to have pretty serious repercussions on the way my troops performed.  In the centre of our line was another schiltron, with a supporting unit (or Herces) of archers on either side, and then there was more of the same on our left flank.

facing us were a fair few numbers of English billmen and knights, all supported by more archer Herces. 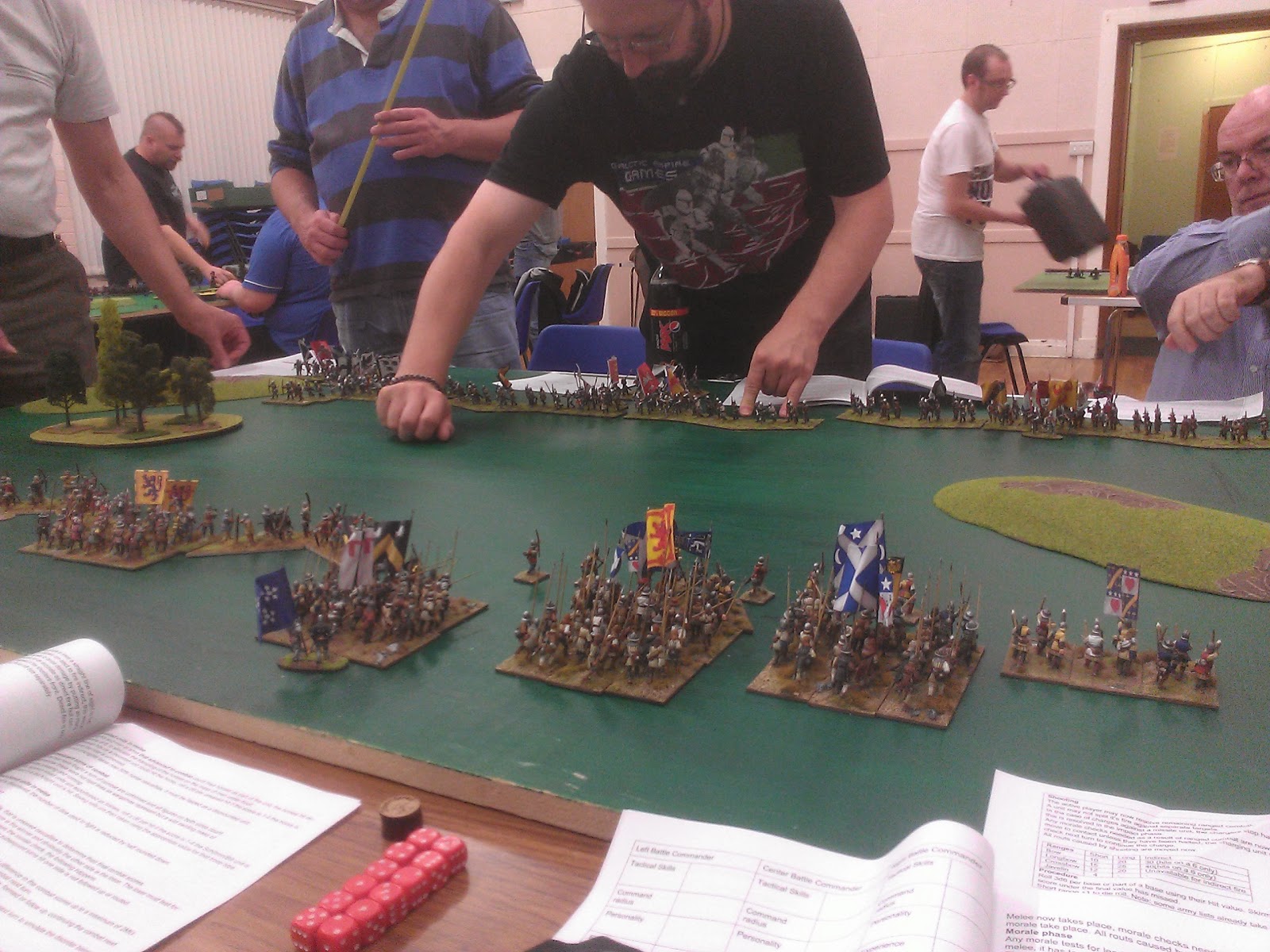 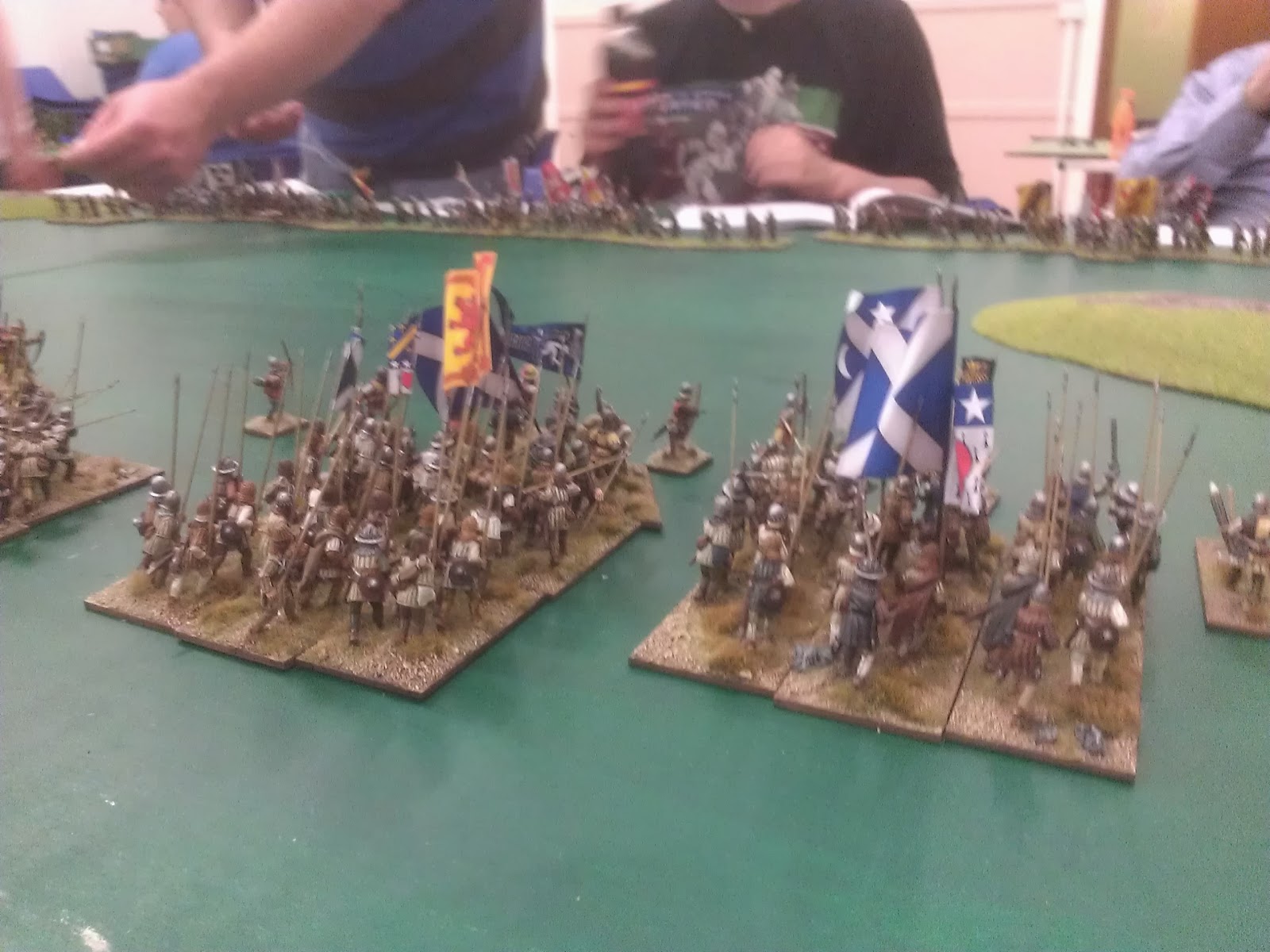 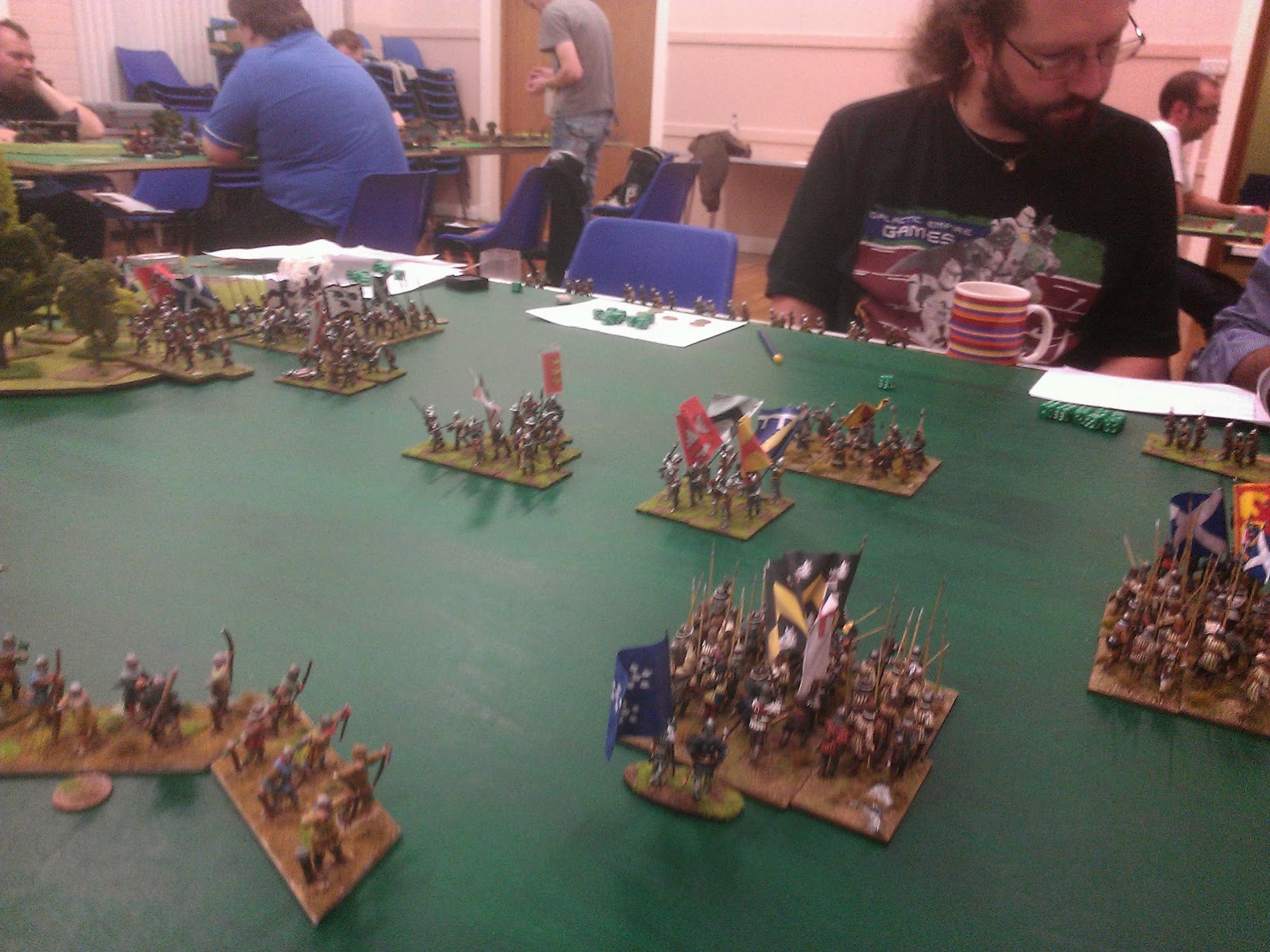 We decided as I had the most able commander that our right flank would advance, while the centre held back slightly and the left stood and shot at any English that came near.

In the Hollow Crown rules schiltrons are quite difficult to move effectively but you are able to use your commander to mitigate this, which is what I spent most of the game doing.  This allowed me to advance in good order. In the meantime our centre shot the advancing English to ribbons and thing were looking good for us.  Unfortunately we discovered that in these rules Knights are very very tough, and the centre schiltron stumbled a bit when it engaged them in combat. It then got a very bloody nose when a supporting unit of Highlanders charged in.

While this was going on I had just about managed to close the distance to my opponents and finally managed to get a charge in against an English archer Herces, which had the desired effect and chased them of the board. 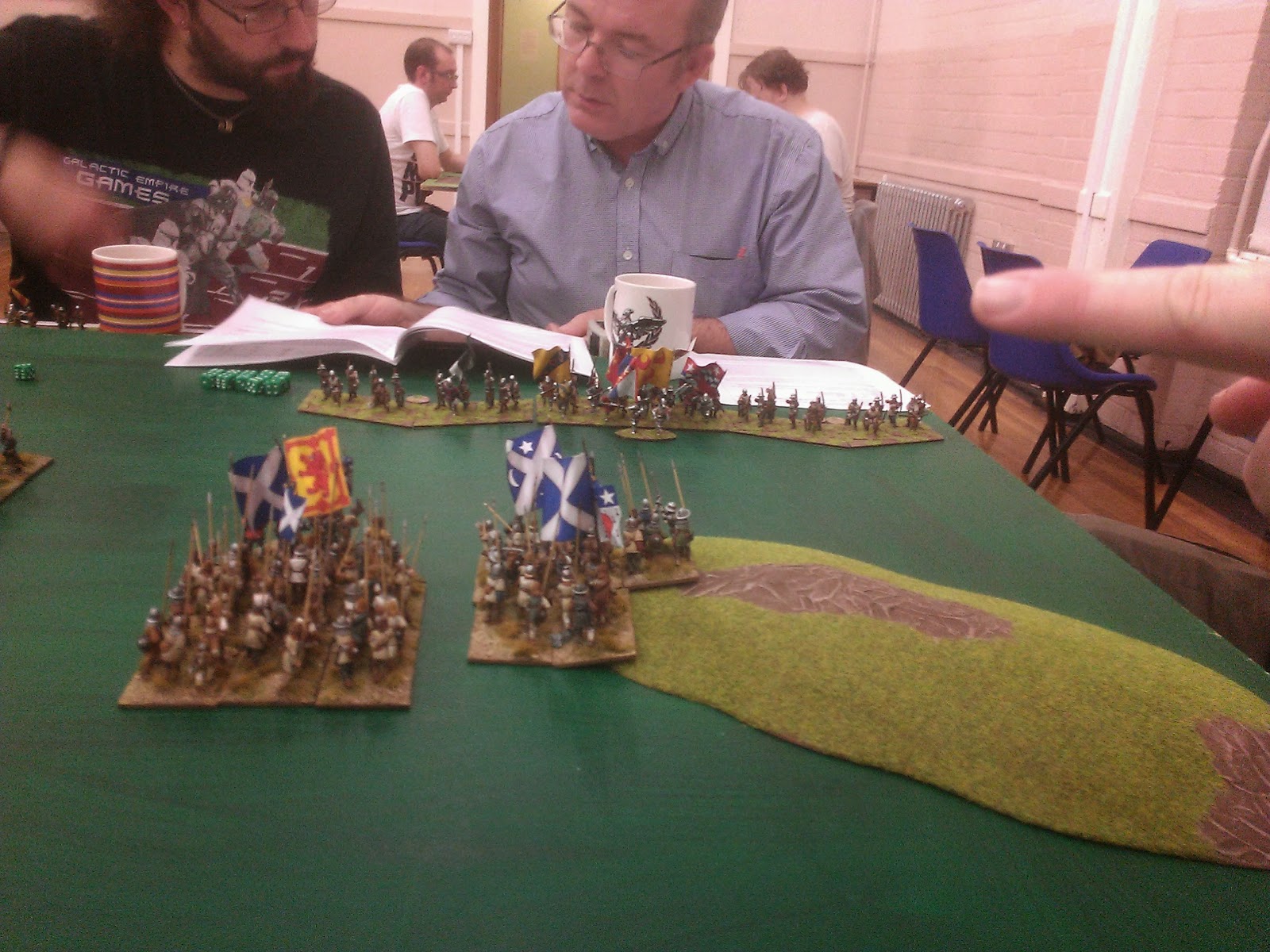 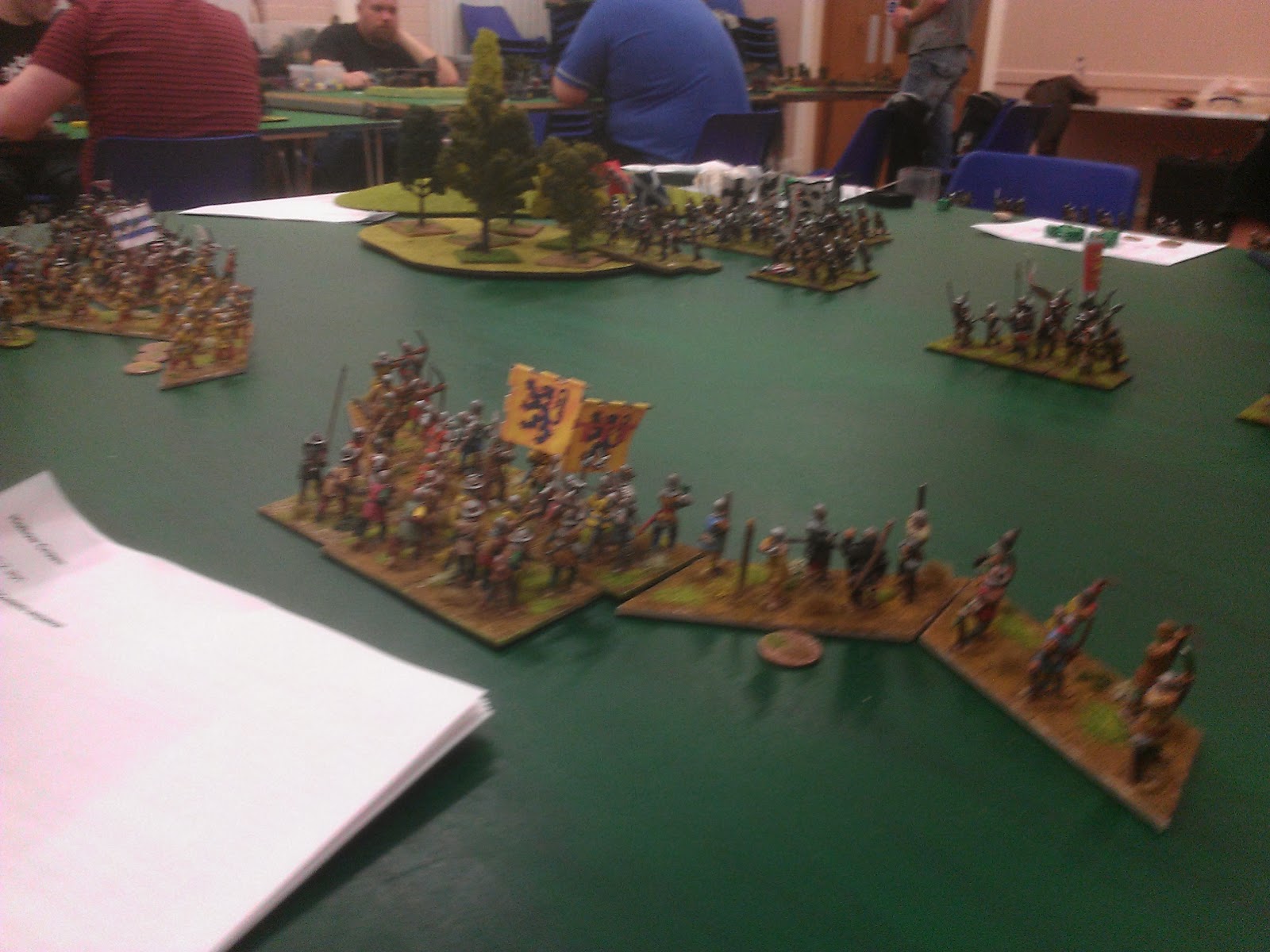 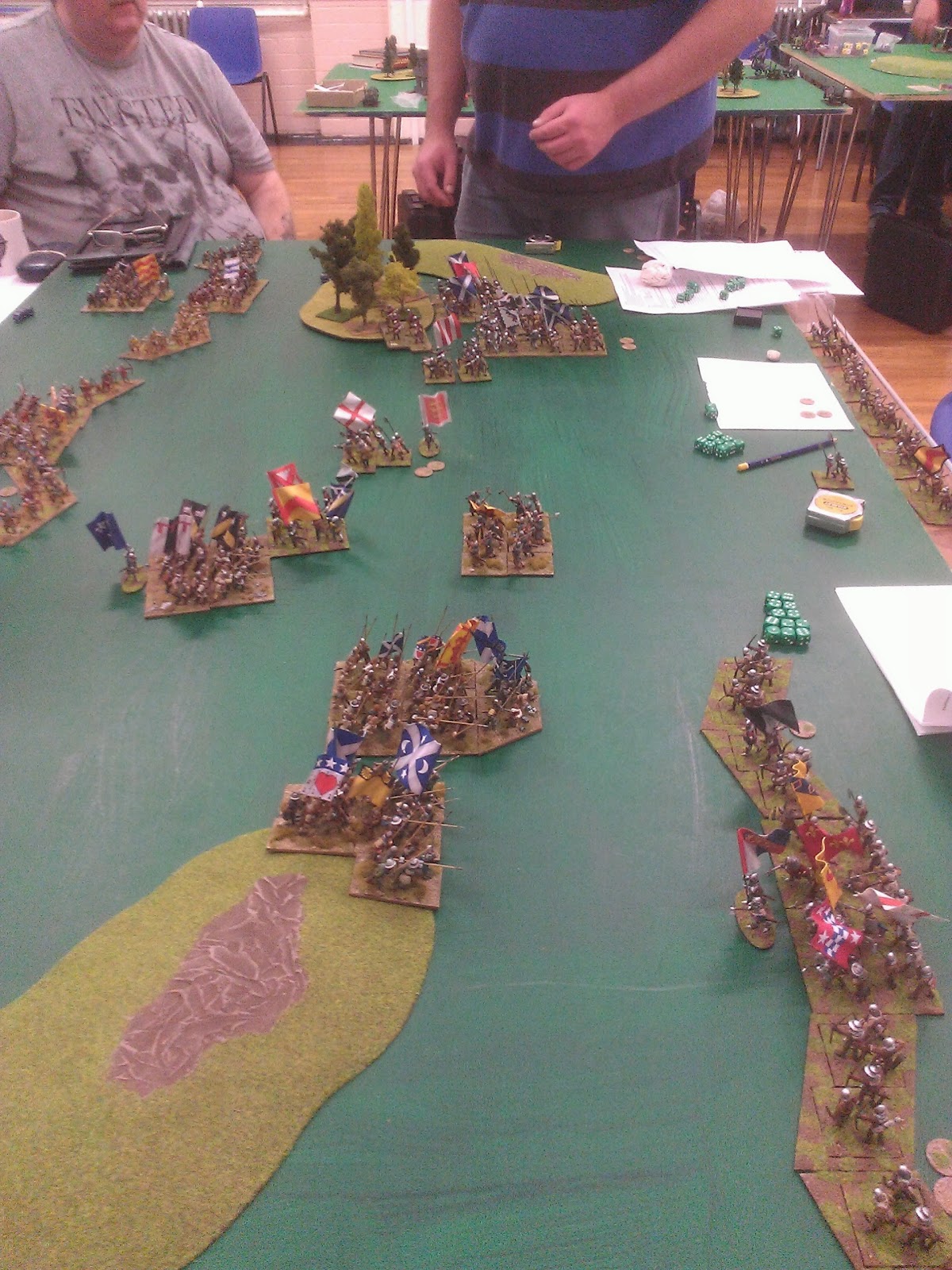 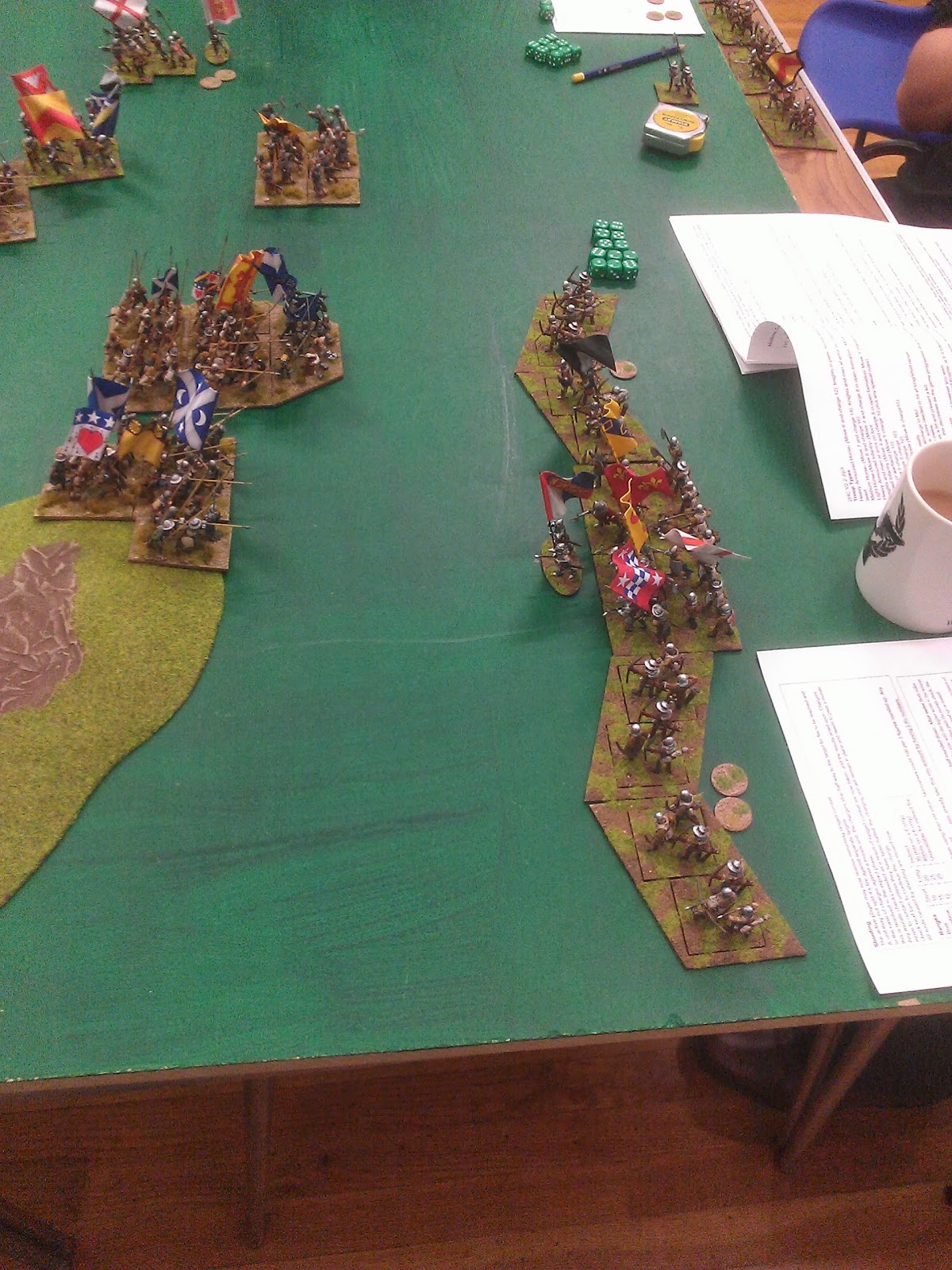 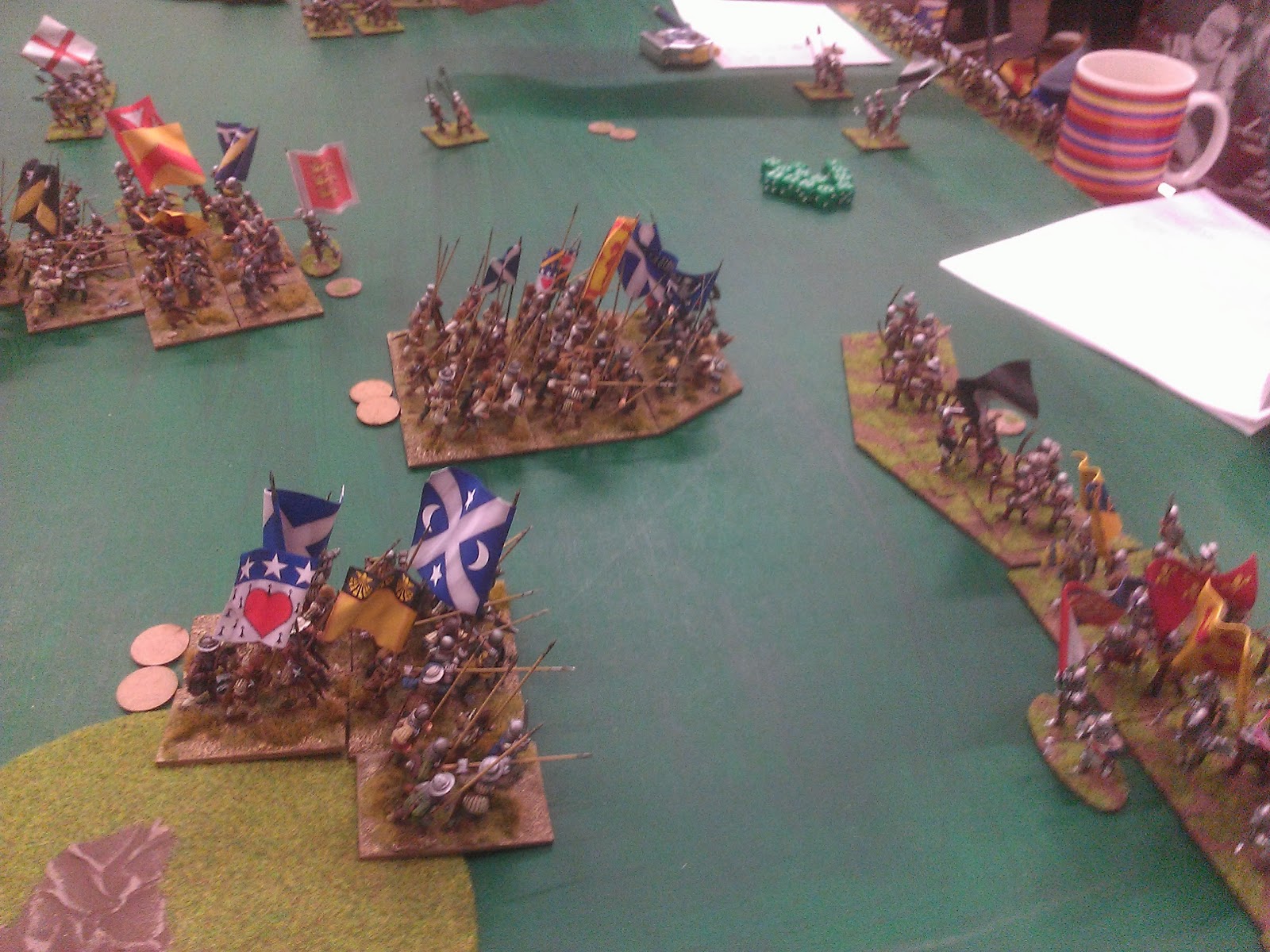 All in all it was a great night and the rules look like they are going to be good fun.  A nice blend of resource management and bucket of dice rolling.  Another advantage was getting to use Dave Imrie's beautifully painted miniatures, produced by his own Claymore Casting.

I am quite keen to try these rules again as they were good fun.  I am also considering a Scots Army from Claymore Castings for next years project.  I haven't really decided but it is mostly an infantry army and I really hate painting horses so that is something in its favour.  So many periods and armies and so little time!

Next week Ian and I will (hopefully) be playing X-Wing. I say hopefully as so far this game has been cancelled and postponed 5 times. So far nothing has come up for either of us so I am hoping we get the game in.

Also this week my blog hit 1000 page views.   I am not sure who it is as I only have 6 followers, but someone must be having a look!  My page hits have increased since I posted links to some game reports on the Impetus forum.  I am not really very active on very many forums so dint really advertise very much so it is nice to real 1000 hits.
Posted by Kevtheinx at 13:59