I finally got a chance to try out the new Dark Elf army book that was recently released by GW for Warhammer 8th Edition.

Ian and I had decided to play at 2000points, with a random scenario picked from the main rulebook.

The new Dark Elves now hit a bit harder, but have also got a bit more expensive.  I decided to take a selection of units to try out against Ian's chaos.

I ended up with:


As the scenario was random I took a fairly balanced army. 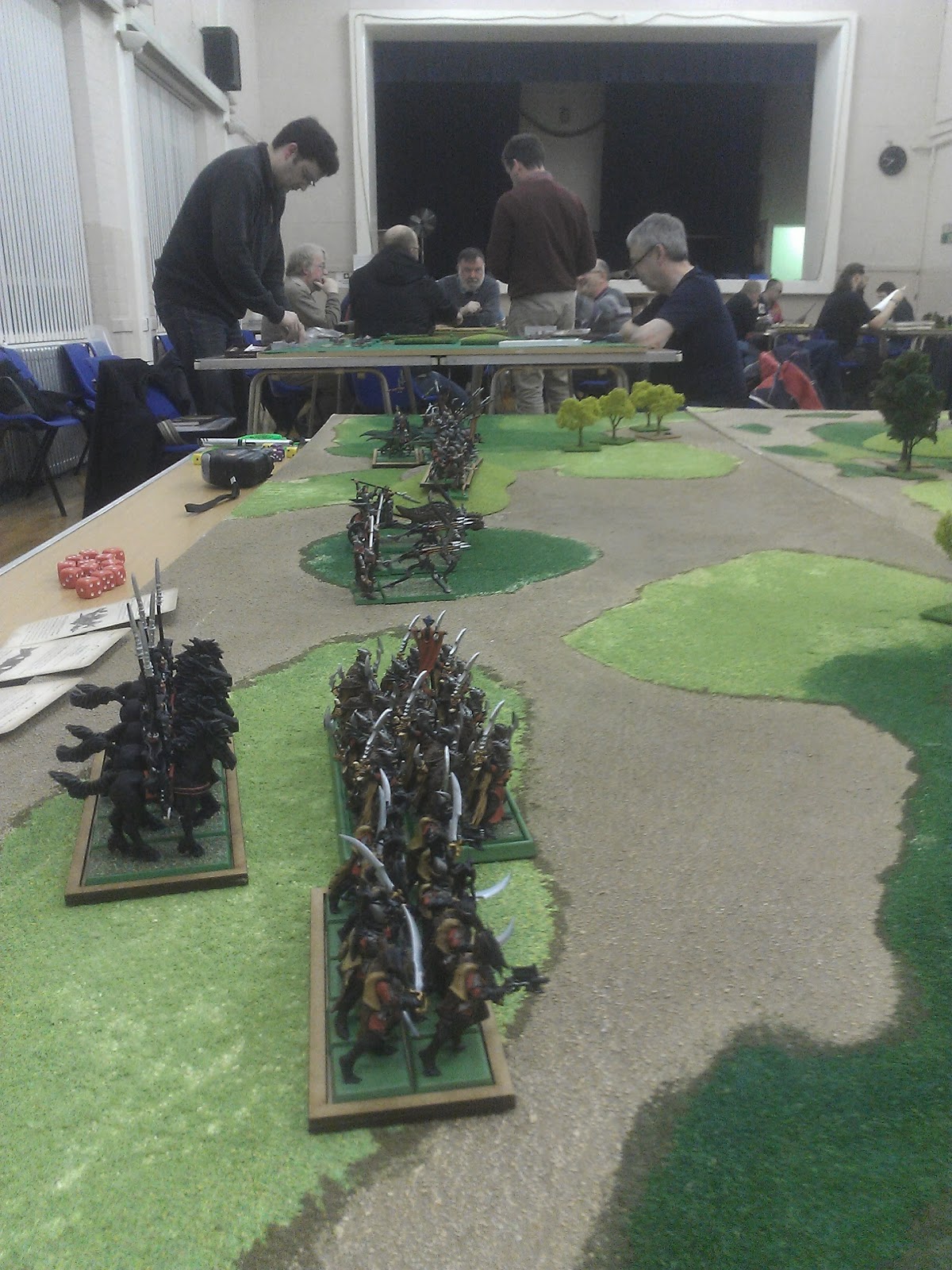 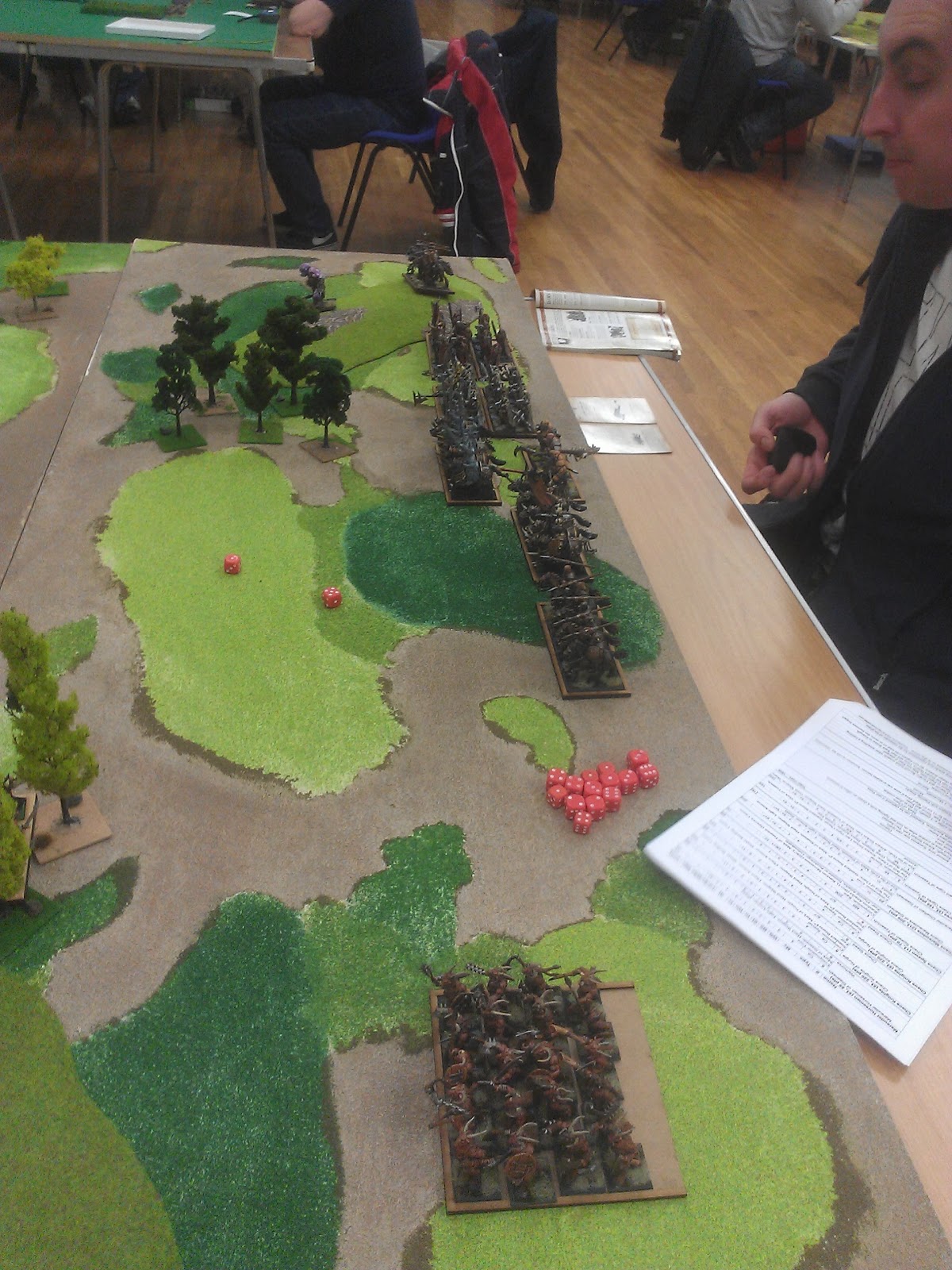 In the end we generated the Dawn assault, which forced random deployment of out armies.  the deployment worked out fairly well for me as most of Ian's army ended up on my right, with his heavy cavalry exposed in the centre.

My army performed pretty much as I expected. My witch elves got butchered by a unit of chaos warriors, my shooting was fairly underwhelming against all the armour. The lighter elements of the chaos army were quickly overwhelmed, but the stand out unit for me were the Cold One Knights. They single handed broke the chaos army, wiping out one unit of chaos knights and then getting revenge for the dead witch elves. In the end I managed a fairly comfortable victory, with only one unit of chaos warriors remaining on the table at the end of the game.  Having said that Ian had some terrible luck and the dice really let him down in some crucial combats.

The dark Elves proved to be pretty versatile, with the combination of missile fire, heavy hitters and manoeuvrability proving to be very adaptable.  They were pretty much always that though so no big change there.  The new rules did not come into play that much as the Chaos Warriors have a pretty high Initiative, which makes the advantage seem a lot less.   The Murderous Prowes (re roll to wound roles of 1) only really came into play once in the game, where is saved the chariot from getting squished by some chaos ogres.


I did not field any of the fancy new toys as I much prefer to field more rank and file troops, so no Cauldron of Blood. I am not a big fan of the Hydras either so I left it at home.

All in all I did not see much difference and do not think there will be much change in how I play my Dark Elves. Corsairs got a bit better, with the Sea Dragon Cloaks getting better and the stupid slaver rule getting dropped. Hand bows also got a bit better a well.  All in all this is a good thing as it was the Corsairs that were my main reason for starting Dark elves in the first place.  The only new units in the book that I am interested in trying out are the Warlocks and the Medusa.  The Warlocks as the rules look quite interesting, and the Medusa as the model is lovely.  In general the models in this release have been a mixed bag.  The new Witch Elves and Rank and File warriors are both lovely. The new chariots are beyond stupid (one wheel?! What were they on when  they designed that?). The new Dark Riders are nice but the horses are not. The new Hydra is pretty nice as well.  I also like the Blackguard/Executioner models as well, but as always with GW the price puts me off investing in any for now.  Perhaps in the future, but at the moment they are too expensive to justify.
One thing that was interesting was the selection of the random scenario. This really changes how you select your army as you need to cover all the possible conditions you might come up against. I needed to consider an army that was versatile enough to stand a random deployment, had enough banners to survive or a unit that was the right size to be stationed in a watchtower.  It made for a more interesting game and I think we will play like in the future.


There are a few of us playing 3rd edition as well, but as far as I am concerned it is just another version of Warhammer, with a few different numbers. it is all about the scenario these days.  especially if you are not sure what scenario you are going to end up playing.  If all you ever played was a pitch battle then the game would get pretty boring pretty quickly.
Posted by Kevtheinx at 03:17

Email ThisBlogThis!Share to TwitterShare to FacebookShare to Pinterest
Labels: Warhammer