This weeks game was originally going to be another bash at Oldhammer between myself, Rory and Dave K.  Unfortunately Rory called off as he was working on finishing off his man-cave (lucky git!) so Dave and I decided at the last minute to give Dux Brittaniarum a whirl.

I bought Dux B when it first came out over a year ago but did not have the forces painted at the time to play it, and then in typical fashion other games started to take precedence so it got forgotten about for a bit.
After the latest batch of excellent Dark Age characters came out from Musketeer Miniatures I started to think about it again so when Rory cancelled I suggested to Dave that we gave the game a go.

I am a big fan of the Too Fat Lardies as I think their approach to  game play is excellent. As a long time player of Games Workshop games it is certainly refreshing to play a set of rules  that is designed for fun and period flavour, rather than as a marketing tool to drive miniatures sales.  I have Sharpes Practice and it is a really good looking set of rules but my Napoleonic project has stalled badly, mainly thanks to Impetus and Bill at Musketeer Miniatures, so I was very happy to see the Lardies produce a set of rules for a period that I was already in the process of painting and collecting.
Dux B is set in England right after the departure of the Legions, at a time when the Saxons were starting to invade and generally make a nuisance of themselves. It also includes an excellent campaign system, but more on that later.

I am also quite keen on the Dark Ages. I am not much of a Historical Gamer, as the main drive for me is the appearance of the game and how enjoyable the rules are, with my lack of period knowledge meaning that I am not that bothered about period flavour beyond how the game feels.  Period Flavour is an entirely subjective thing anyway, as evidenced by the sheer volume of rule sets that are out there.
Dark Ages gaming is ideal for me as I don't have to worry about regimental uniforms, orders of battle etc. as none of that really existed.

We decided to carry out a raid on a village and tossed a coin to see who was what. In the end I ended up with the hairy Saxon types, while Dave landed with the Romano British (very Romano, as we were basically using Roman miniatures as the British). 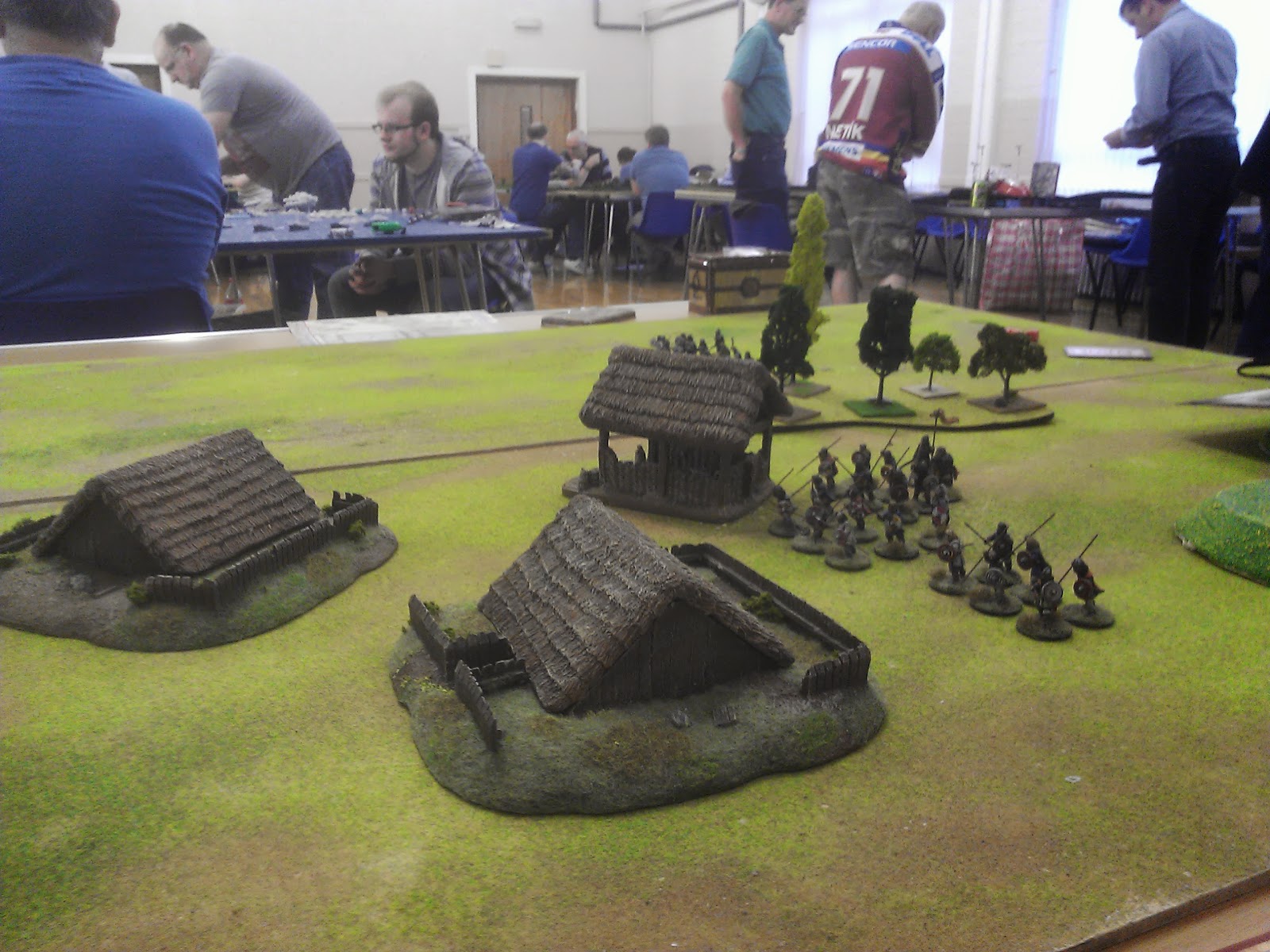 The scenario was that the Saxon Raiders had to search a few buildings, locate the loot and the escape of their board edge with it, all while holding off the British that had come to try and chase them off. I managed to get quite close to the village before any of the British arrived, which was very good and set to searching as quickly as possible while sending a token force to hold of the British when they started arriving.


I quickly manage to get into the buildings and started searching, while Dave's British rushed to intercept us. There was a small encounter between some Brits and some Saxon Hearthguard, with the Brits coming of slightly worse, but then Dave really stuck the boot in and started to give my small line of defence a good doing over.  He dispersed my Missile troops quickly and then one of his nobles attacked with a group of troops and gave the Saxons a very bloody nose.

While this was going on I was busy searching the houses and with a stroke of luck managed to find both pieces of loot in one turn (each turn of searching you rolled a D6, on a 6 you found the loot).

My remaining Saxons quickly started running away (although some of my force were already running away by this point) with the British in hot pursuit. 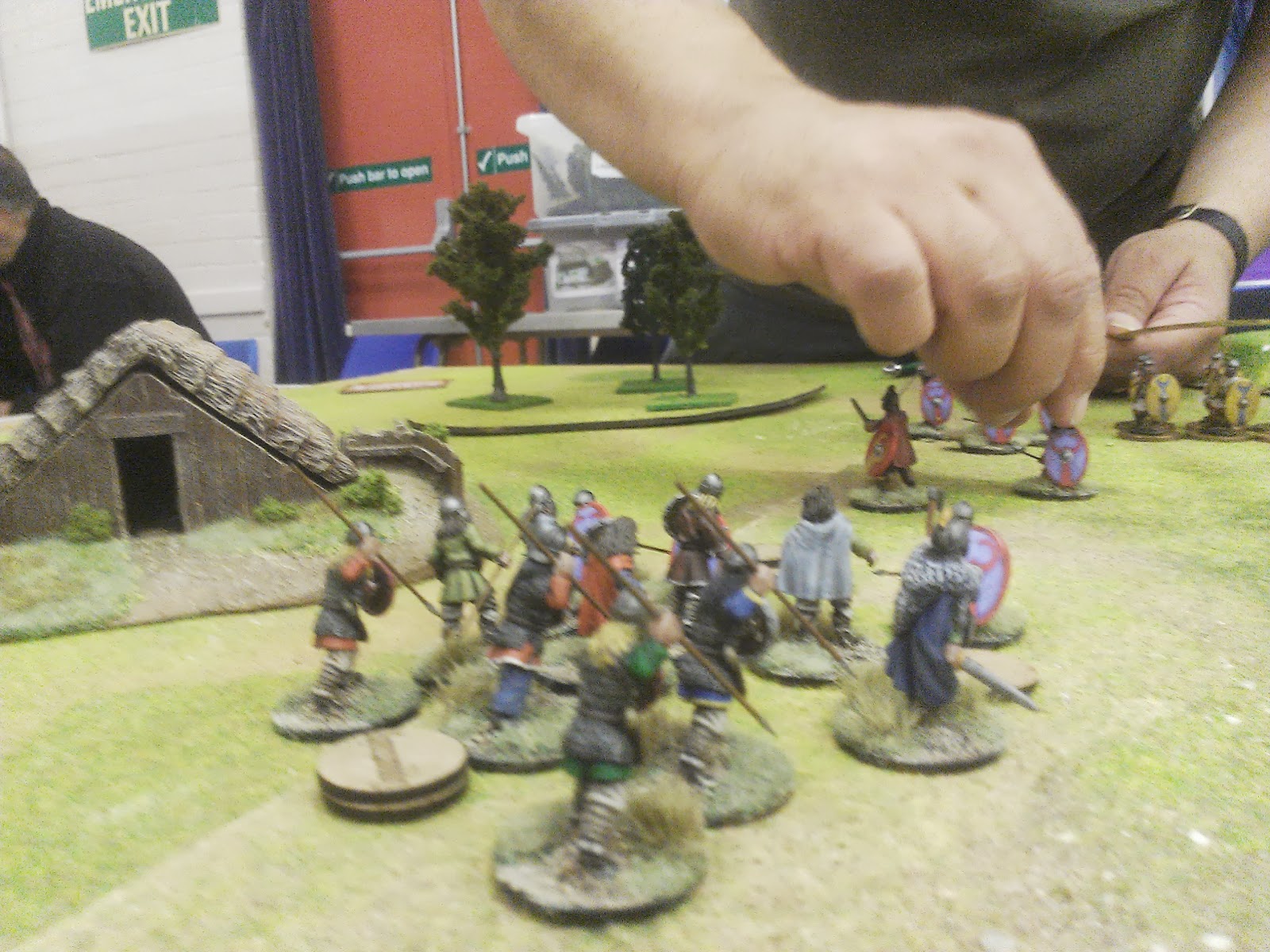 I managed to escape the board with both loads of loot, and with my force relatively intact to boot. I lost 11 men, while Dave lost 6.  We consulted the victory conditions and discovered that the Saxons had secured a narrow victory!

At this point Dave and I decided to make this the first instalment of a narrative campaign that we would play occasionally. The idea of the campaign is that the British have to defend the Kingdom from Saxon invaders, while your main Noble tries to advance in rank and can eventually become King, while the Saxon Noble is trying to make a name for himself by carrying out Raids, until he is sufficiently famous to mount an invasion of the British Kingdom and start seizing the land. Dave has a look at the map and settled on the British Kingdom of Caer Colun, which was part of the Saxon Shore, on the West  Coast of England.  A good place to start for a campaign as it only consist of three territories so we should be able to come to a conclusion reasonably quickly.

I thoroughly enjoyed this game for a number of reasons:

I am definately looking forward to playing this again, as we have now also generated our Nobles and I will have to go and some research  to find some suitably Saxon sounding names for them.


My only criticism (and it is a tiny one) is the card activation system, as this did not seem to be as random as I would have liked. I am going to look into into counters in a cup and drawing them randomly, which I think will be much more satisfying, but all in all an enjoyable experience that I am keen to repeat.
Posted by Kevtheinx at 16:02