This Monday night Rory and I played our postponed trial game of Warhammer Fantasy 3rd Edition, with club house rules thrown in.

We opted to use the lists from the Warhammer Armies book, with a total points value of 1500 and no wizards larger than Lvl2.

I brought my Orcs and Rory opted for the Empire.
In the end my Orc army consisted of:

On top of this I had a Lvl20 Orc general (to lead the Orc Boyz), 1 Lvl 15 Orc Shaman (in the Orc Archers) and a level 15 Goblin hero in each of the Goblin units and a Lvl15 Orc to lead the Boar Riders.

The Empire army consisted of 2 units if Halberdiers, 2 Cannons, 5 Heavy Knights, 8 Crossbow Armed light cavalry, 10 Foot crossbows, 30 Levies plus a few heroes, including a general on a horse and a single Lvl 15 Wizard.

I won the roll for the first turn and managed a fairly orderly advance. My shooting phase went quite well with the Stone Thrower being on target and taking out one of the Empire cannons before it had even had a chance to fire (hooray!).  My Orc wizard also managed to get a  good volley of fireballs of in the magic phase, eliminating half of the empire crossbowmen.

In the Empire turn they pretty much returned the favour, with the cannon blowing a big whole in my unit of Orcs but the Empire wizards fireball spell was less effective, failing to cause any casualties.  In turn two my Boar Riders charged home into the large unit of levy on my right flank, while the rest of my army closed the gap as quickly as they could.

The Boar Riders made short work of the Levy, inflicting a large amount of damage thanks to some fluky dice rolling, With no losses in return the levy inevitably broke and ran, with the Boar Riders in Hot pursuit.


In the Empire turn two the empire army got stuck in, with charges all round.  In the ensuing rounds of combat, my Boar Riders continued to chase down the levy, the first unit of goblins managed to beat and then rout one of the units of Halberdiers, while the remaining Empire Knights managed to rout the other unit of goblins.   The main unit of Orcs, containing the Orc general managed to beat their opponents but they passed their rout test to fight another round of combat.

In my third turn things went really down hill for the Empire. The main unit of Orcs managed to beat and rout their opposing Empire unit, and to add insult to injury the Orc general managed to eliminate his empire counterpart in single combat.  By the end of my third turn most of the Empire army was in full rout, with the Orc army only really having lost one unit of Goblins so at this point Rory decided to call it a day. 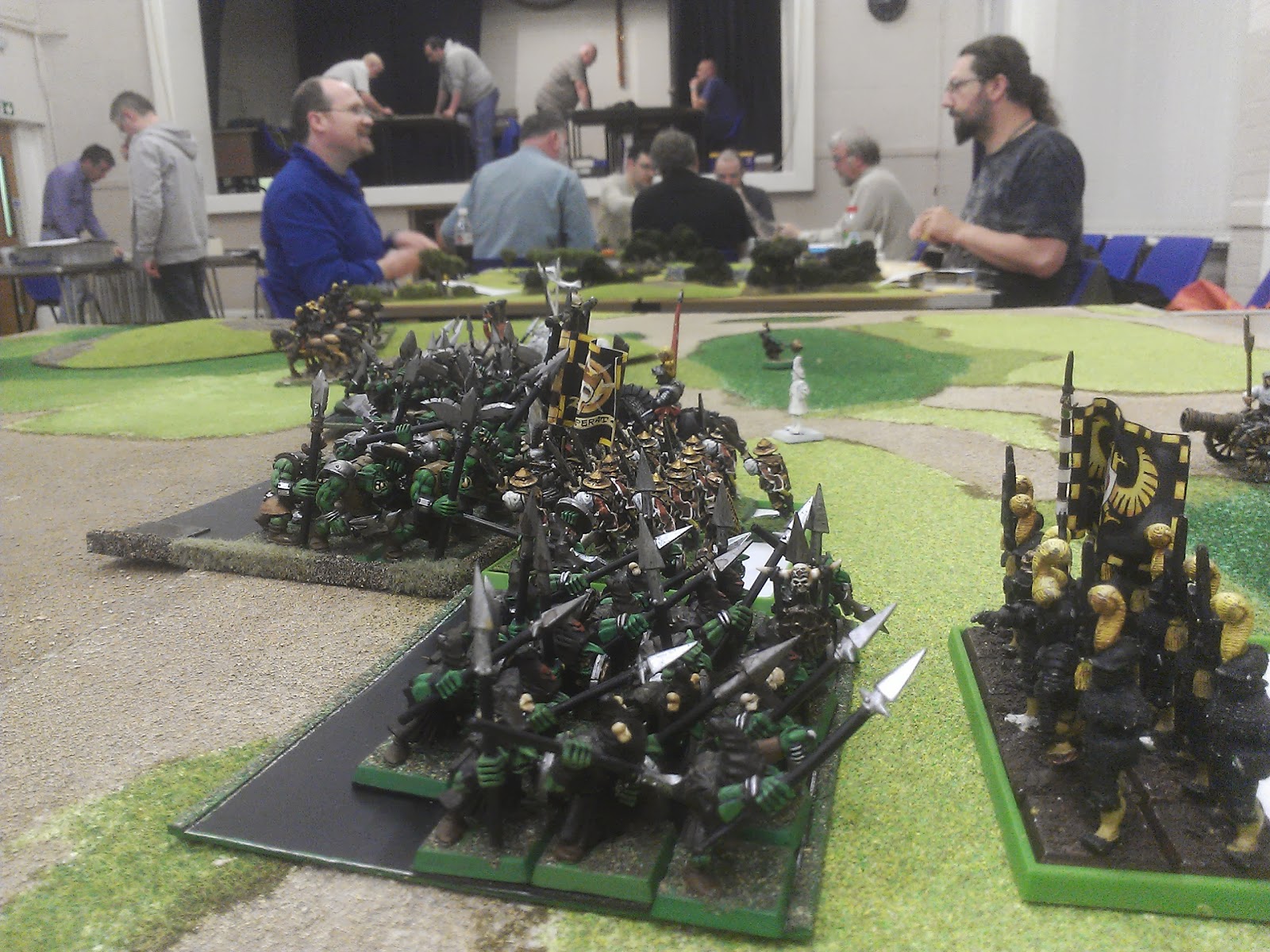 In the end the game only lasted for three turns, which is quick even by 8th edition standards, never mind the slower third.  The few changes we had made to the rules made the game play a lot quicker and I am not sure that they have improved the game all that much.  All in all the game felt much like any game of Warhammer fantasy Battle, just a few of the rules were slightly different as they always are when you change edition.  I think what was missing was a more third edition approach to playing the game. we basically played whfb in the manner that we normally do: pick armies, throw down some random terrain and then have at it, last man standing is the winner. Perhaps that is not what playing Oldhammer is all about and a bit more thought is required for future games?  It is early days yet so only time will tell, but  I am going to have a rummage in the loft for my old Blood Bath at Orcs Drift campaign set and have a look at updating it slightly and see of that helps any.

One thing Rory and I did notice on Monday night was the general noise level in the club. There were 14 games going on during the evening, from a wide range of genres and periods. Of note were:

Two games of Field of Glory in 15mm
Two game of Impetus in 28mm
Four(!) games of Warhammer fantasy Battle, 3 of 8th edition and our 3rd edition game.
One game of Dux Britaniarum in 28mm
One game of Force on Force in 20mm
One game of Piquet in 15mm
One ACW game, but I cannot remember teh name of the ruleset being used.
One game of Dystopian Wars

The club has a real buzz about it just now, with a good range of games going on, and people mixing to play lots of different games. We are even starting to get involved in some historical exhibitions, with the games we put on providing a good visual aid to help bring history to life for some people. All in all a good thing.

Hopefully next week I will get another game of X-wing with Ian, after having to cancel our last arranged game at the last minute. I really hate having to do that but unfortunately life sometimes just gets in the way!
Posted by Kevtheinx at 14:46