Another month in soggy Alt Clut and another bunch of raids. This month my kingdom was raided twice!
The Saxons of Northern Rheged were back, looking for more loot after last month’s easy time of it, and also the Scotti of Cenel N'Gabrain had crossed the country to steal some of our fine livestock.
My Lord decided to ride out against the Scotti, using his household cavalry while sending one of his subordinates to go and deal with the Saxons.
Once again the British were slightly late in giving chase, meaning that they ended up chasing after rather than intercepting the raiders.  Ian managed a maximum three moves with his escaping forces, while I ended up deploying behind them, to the left. It was going to be another evening of running after the invaders. Luckily I brought two units of cavalry to give chase with. 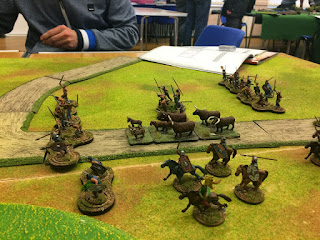 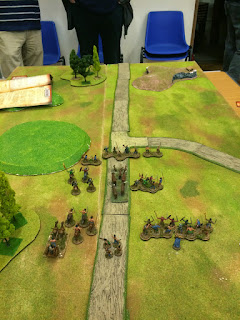 There was a turn of moving and getting into position before I had the opportunity to launch my Lord and cavalry into a glorious charge. The Scotti leader and one unit of cavalry were just within charge range, with only a measly unit of skirmishers standing in my way.  I needed a charge distance of 15” to make contact, and played a Carpe Deum card along with a handful of other useful cards (Artorious and one other I have forgotten). I managed to get a 15” exactly but alas the skirmishers managed to inflict one point of shock before they were dispersed, bringing my elite cavalry and accompanying lord up short by 1”.   Ian wasted no time and as soon as his cavalry had the chance they charged home against my cavalry, and a messy fight ensued. After a couple of rounds basically all the cavalry in the game were neutralised, with my Lord taking a wound and the Lords champion sacrificing himself to save his Lord.

All the while this was going on Ian was herding my cattle and sheep further towards his table edge and away to the Scotti lands.  I managed to get my troops on to the board but with my cavalry neutralised there was no much chance of me catching them with my Levy.  The levy really needed to be in shieldwall to stand a chance against the raiders, and if in shieldwall they would only move 1D6 inches a turn, and without shieldwall they would be cut to ribbons.  My only chance of stopping the raid now was to break the Scotti morale, and despite my best efforts Ian wisely refused to give battle and happily ran off with my livestock.

So another successful raid against my kingdom in two months, with another still to be fought. Another player who cannot fight this month due to casualties is going to attempt to chase of the Saxons on my behalf, and I sincerely hope he manages it as if they succeed the Saxons will be back in May looking to steal some land.
Another game of Dux B and I struggled with this to be honest. The activation is so random it is very difficult to plan much of anything, as you have no idea when in the turn you are going to activate.   In this game my cavalry all activated very early in the turn, which is not ideal as you like to have the opportunity move some units in support or limit the amount of troops that your troops have yet to activate.  It is a learning curve and the result of this game basically came down to a distance of 1” as if the Brithish Shock Cavalry had managed to charge home it would have made a big mess of the Scotti force.  Not to be though and I wait to see the result of the Saxon raid with baited breath.  Random deployment is a pain as well as my last four games of Dux B have all basically someone chasing the other down the board. AT least of the Saxons get a straight up battle I will get a decent scrap out of it!
Posted by Kevtheinx at 12:49