Gruagach in the Woods


Back to Middle Earth for this week’s game. I got a pack of Woses for Christmas and they were pretty much the first things I painted this year.  They only appear in one scenario, in the Return of the King book.  In this scenario the Rohan are trying to sneak through some forests that are infested with Orcs and other nasties loyal to Sauron.  Theoden enlists the help of the Woses to guide them through the woods unseen.

In the scenario the good player has to get Theoden and half of the rest of the Rohan off the far edge of the board, while all the evil player has to do is stop him.  At the start of the game there are only a few orcs milling bout on the board, while the Wose are using their excellent woodsman skills to stalk the orcs unseen. Every turn D3 Rohan appear on the board, while D6 Evil troops also wander on to the board. If at the end of any turn there is an evil model within 6 inches of any good model the alarm is then raised and the remainder of the evil force arrives on the board, basically making the game virtually impossible for the good player to win.
Rory and Kenny volunteered to play, with me being the Umpire. Rory opted to play the forces of Rohan, leaving Kenny as the forces of darkness.
We started with the Wose fairly evenly spread across the board in small groups, with the orcs concentrated in the centre of the board.  The wose managed ti inflict some early casualties, while Rory opted to hang back with his Rohan so that he had time to build up his forces. Kenny started moving his troops up the board in an attempt to get them within the magical 6 inches that would allow him to deploy all 70 of his troops at once. 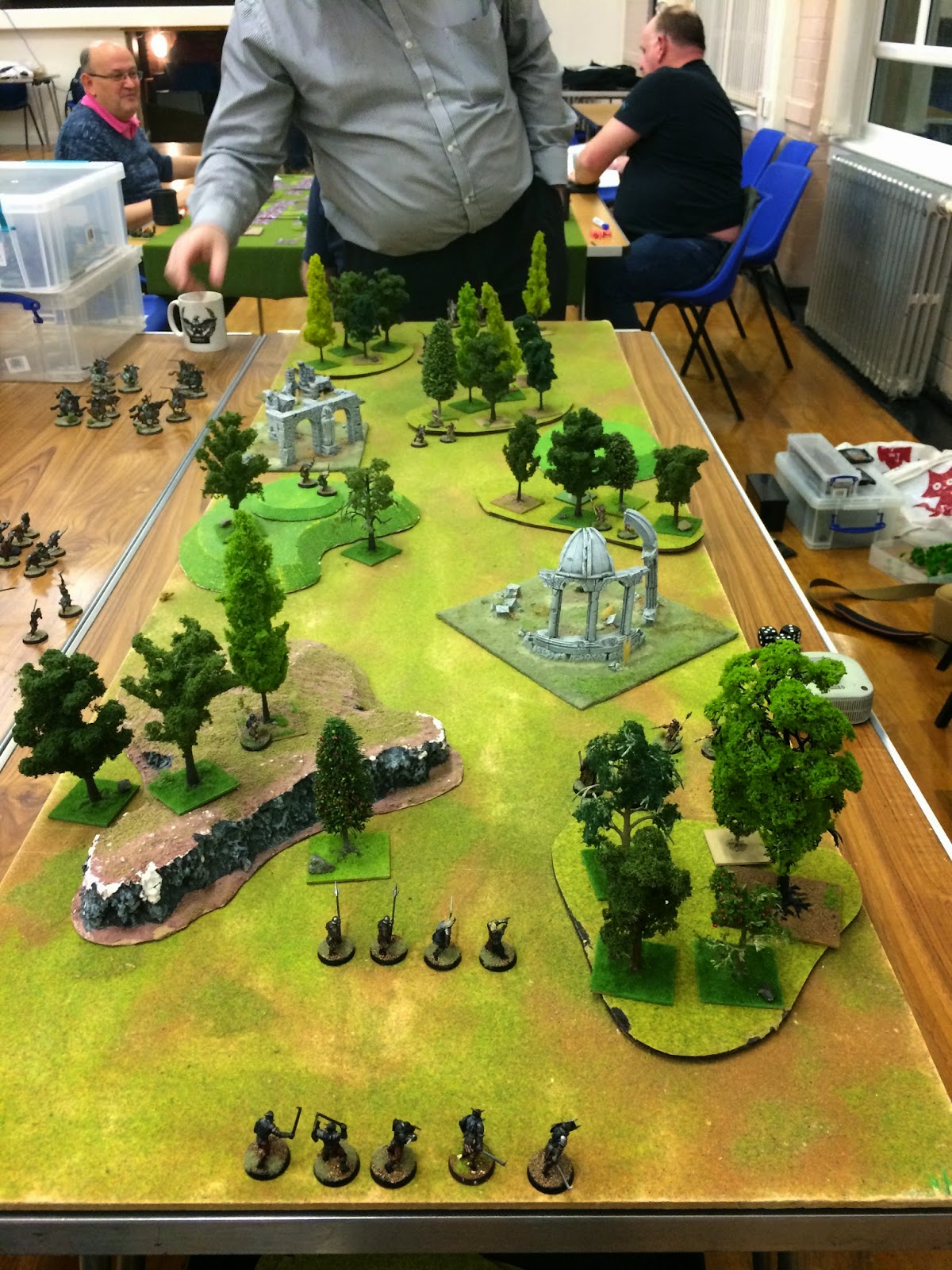 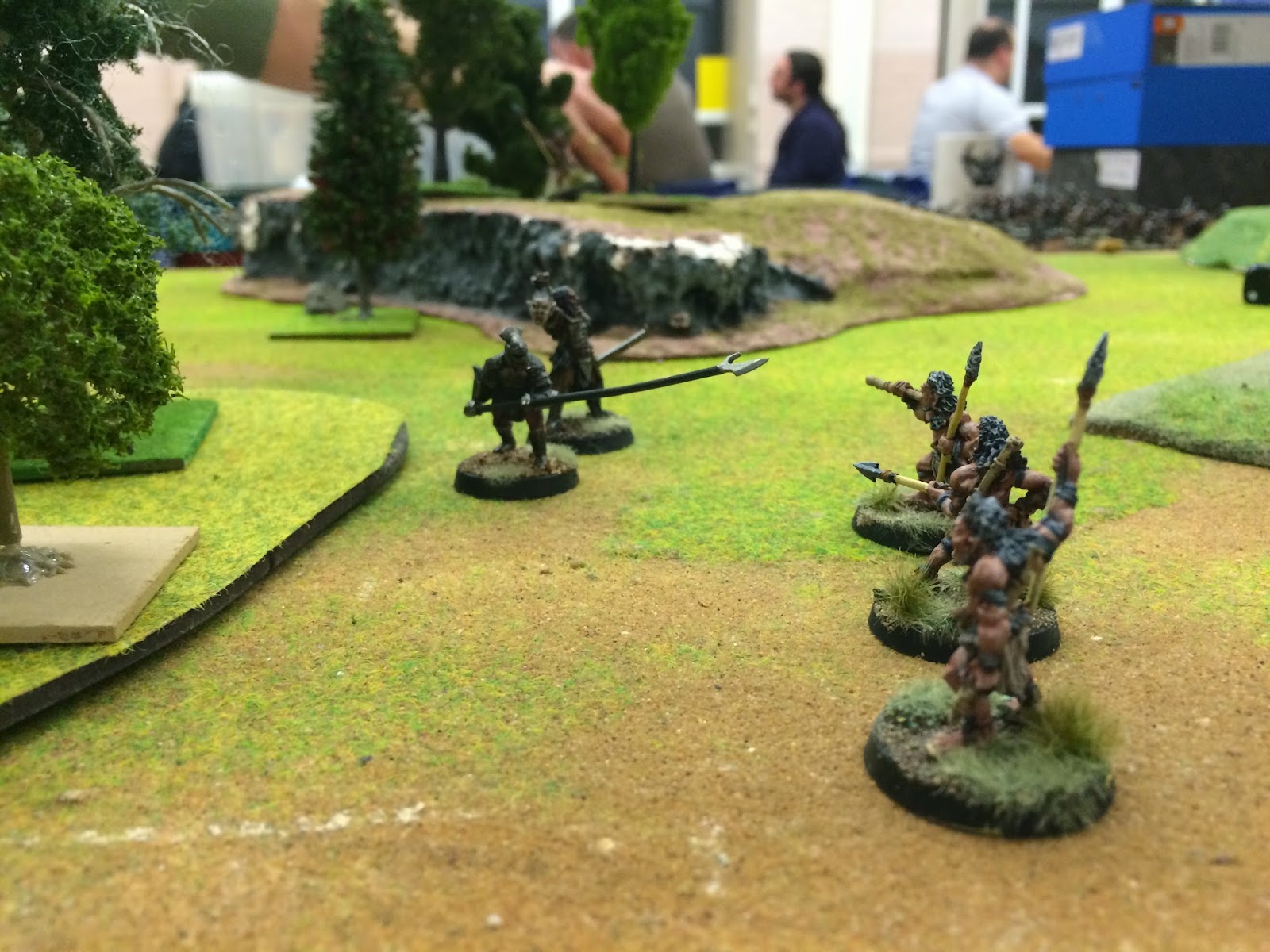 Rory managed to get most of his Rohan on the board and inflict a few casualties before the inevitable happened and he was spotted.  He had managed to advance about half way across the board but was not facing an uphill struggle as Kenny deployed the remaining 50 or so orcs on to the board. 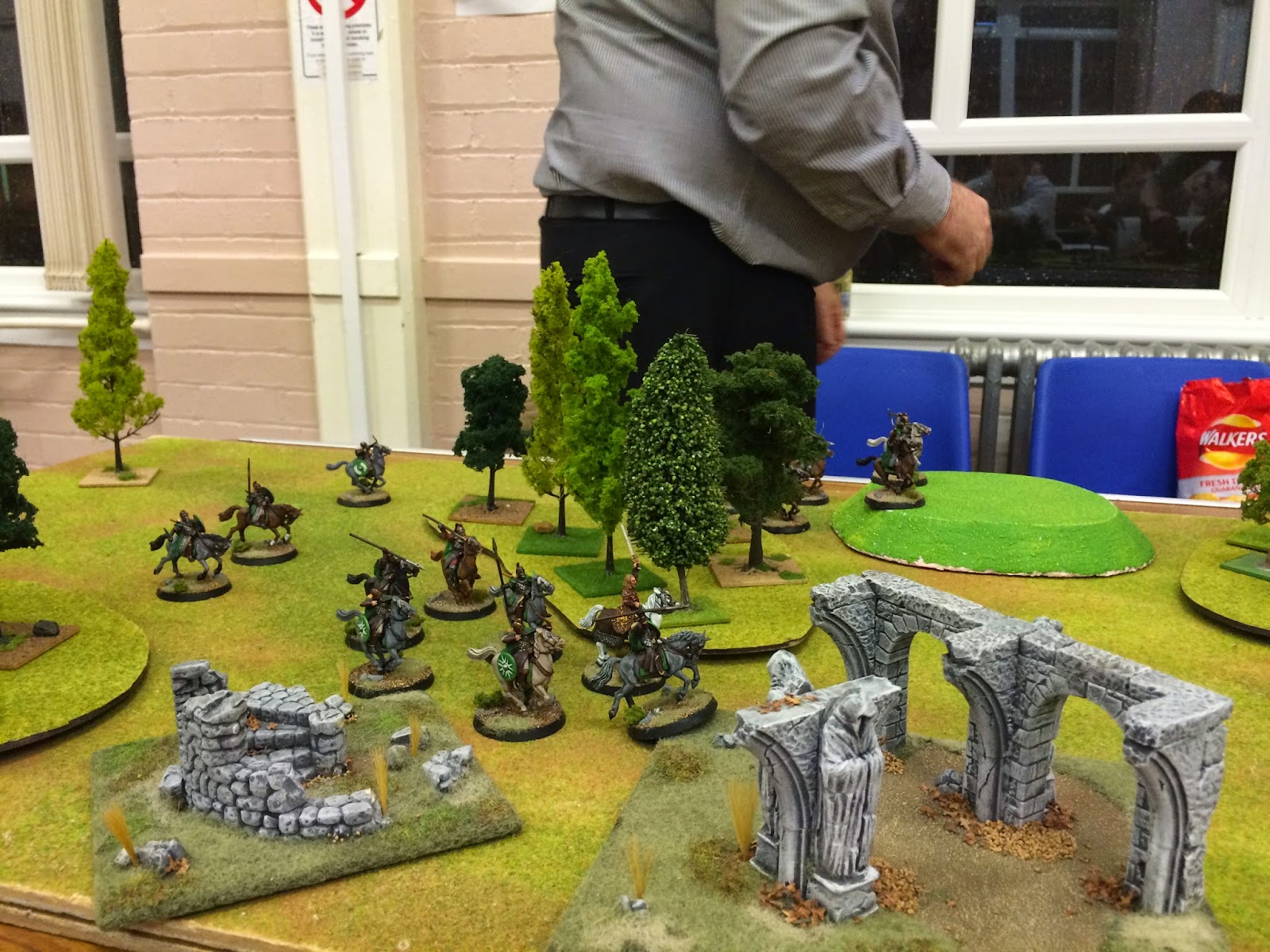 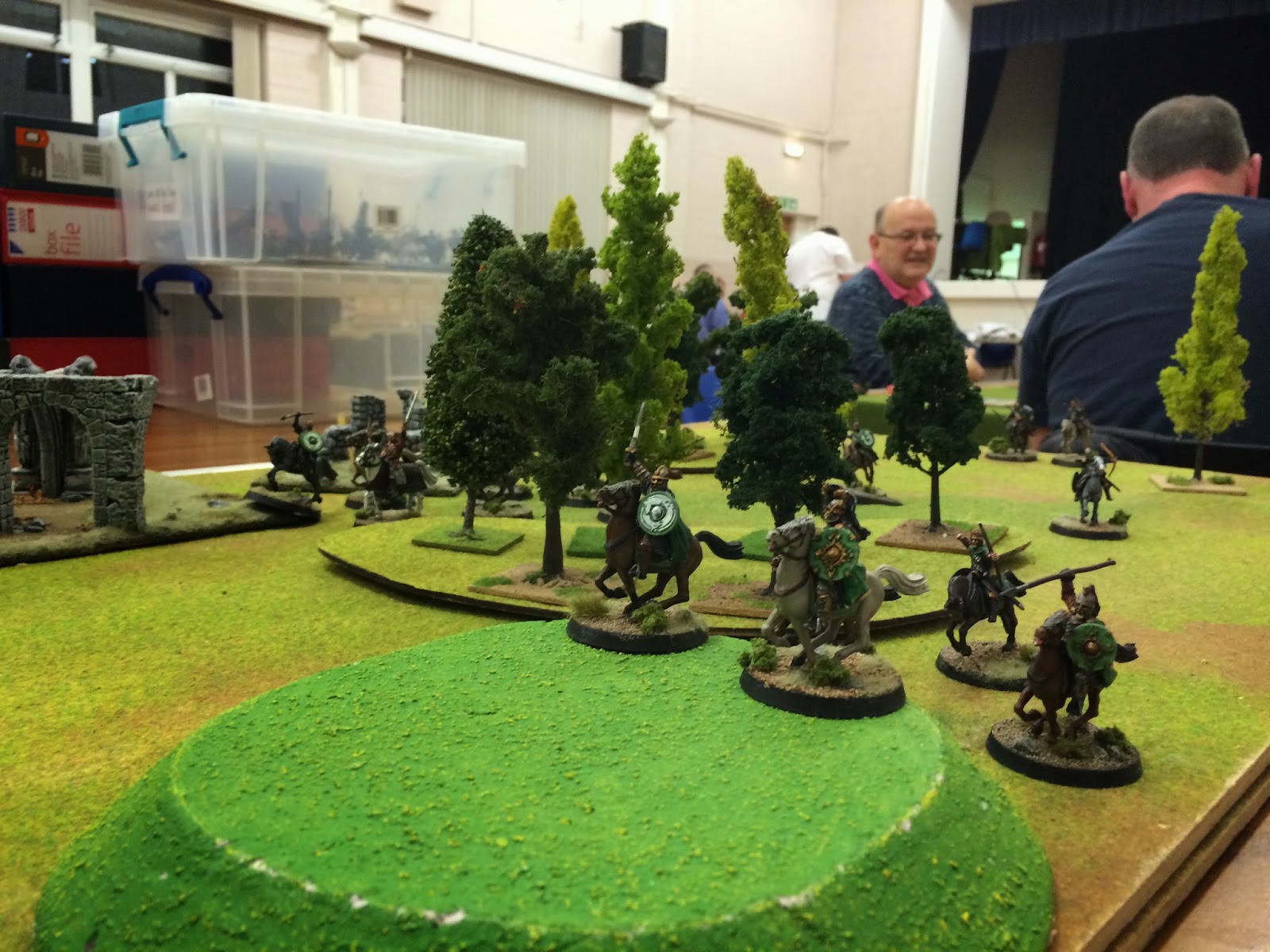 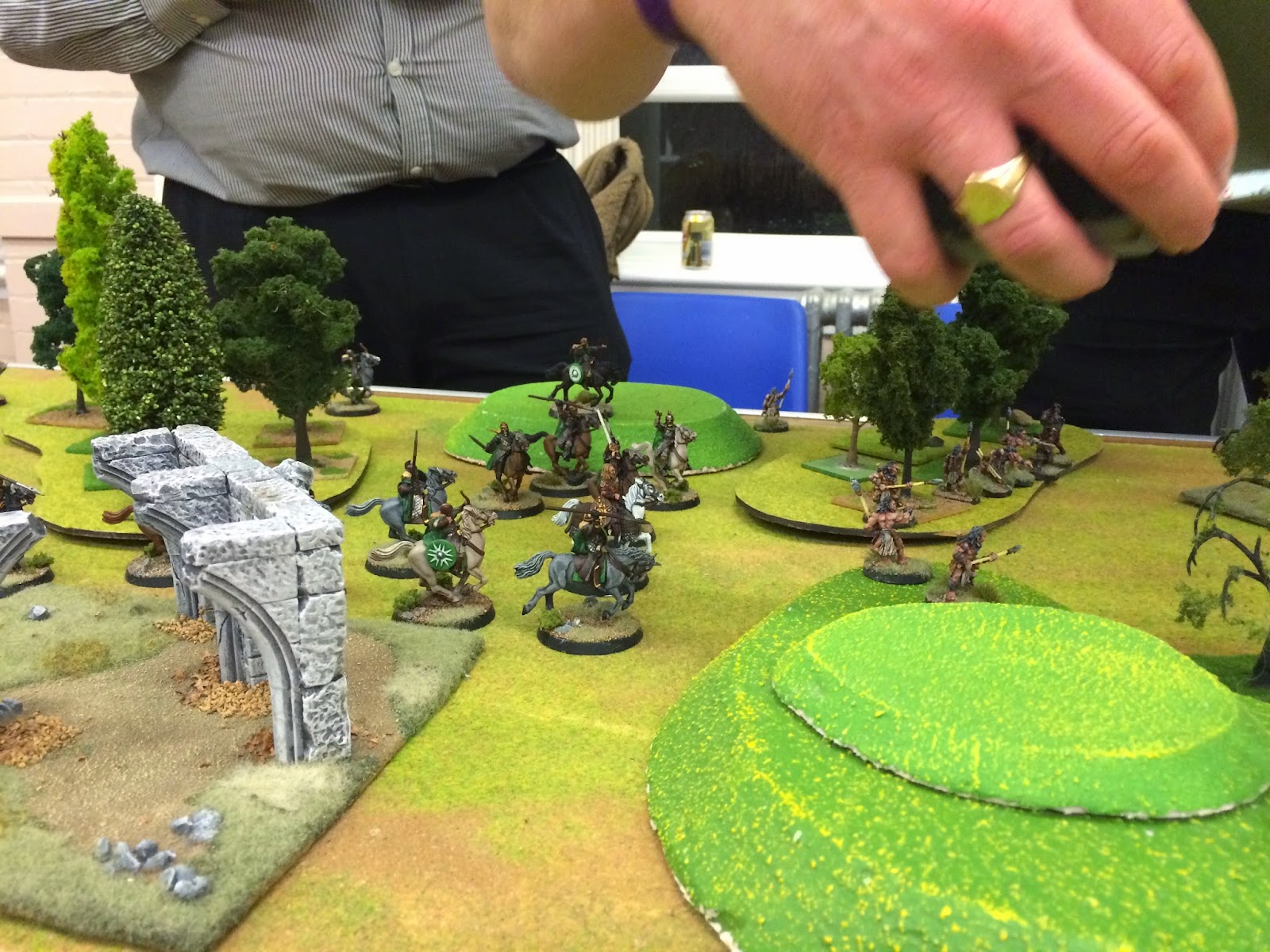 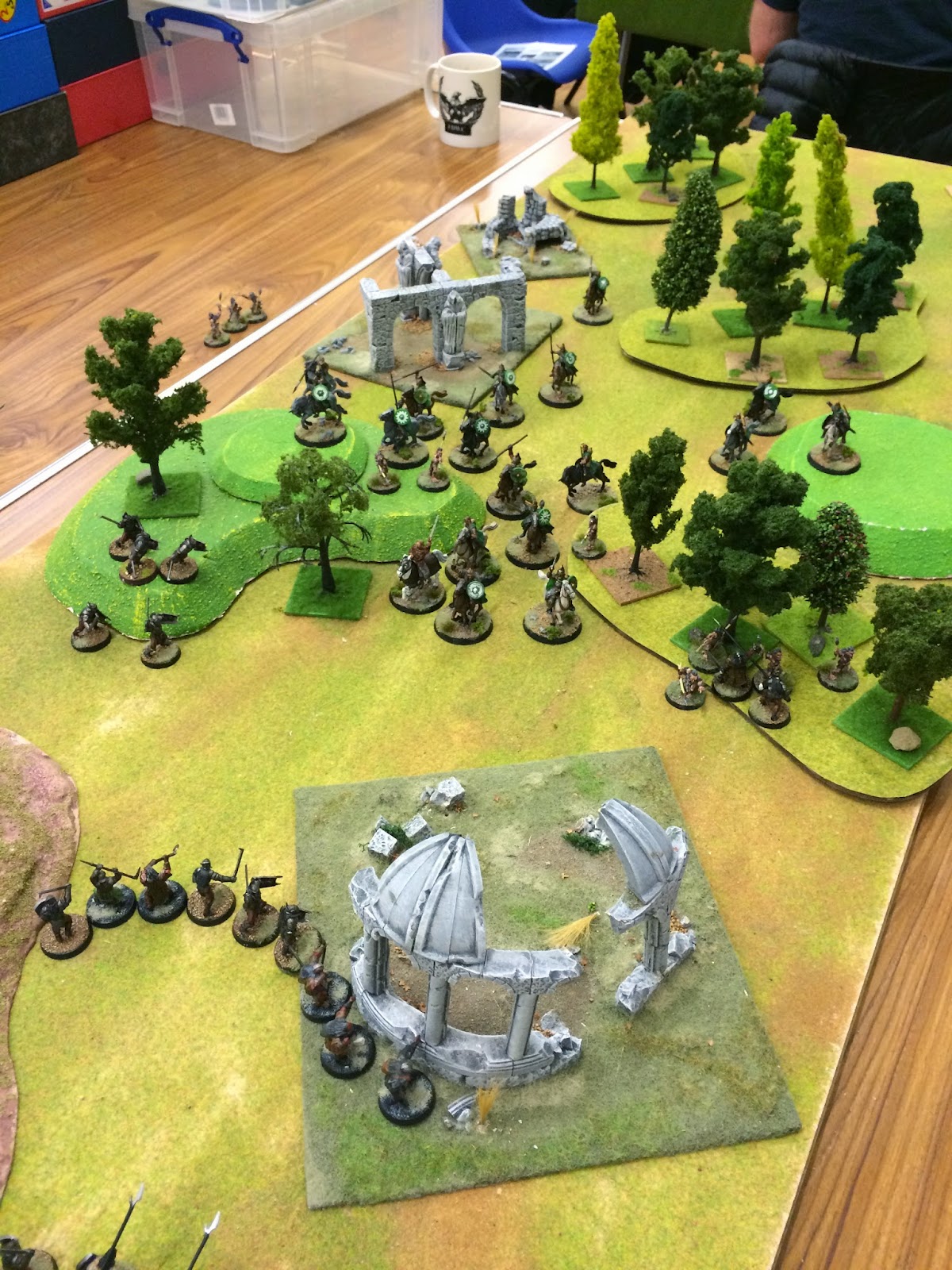 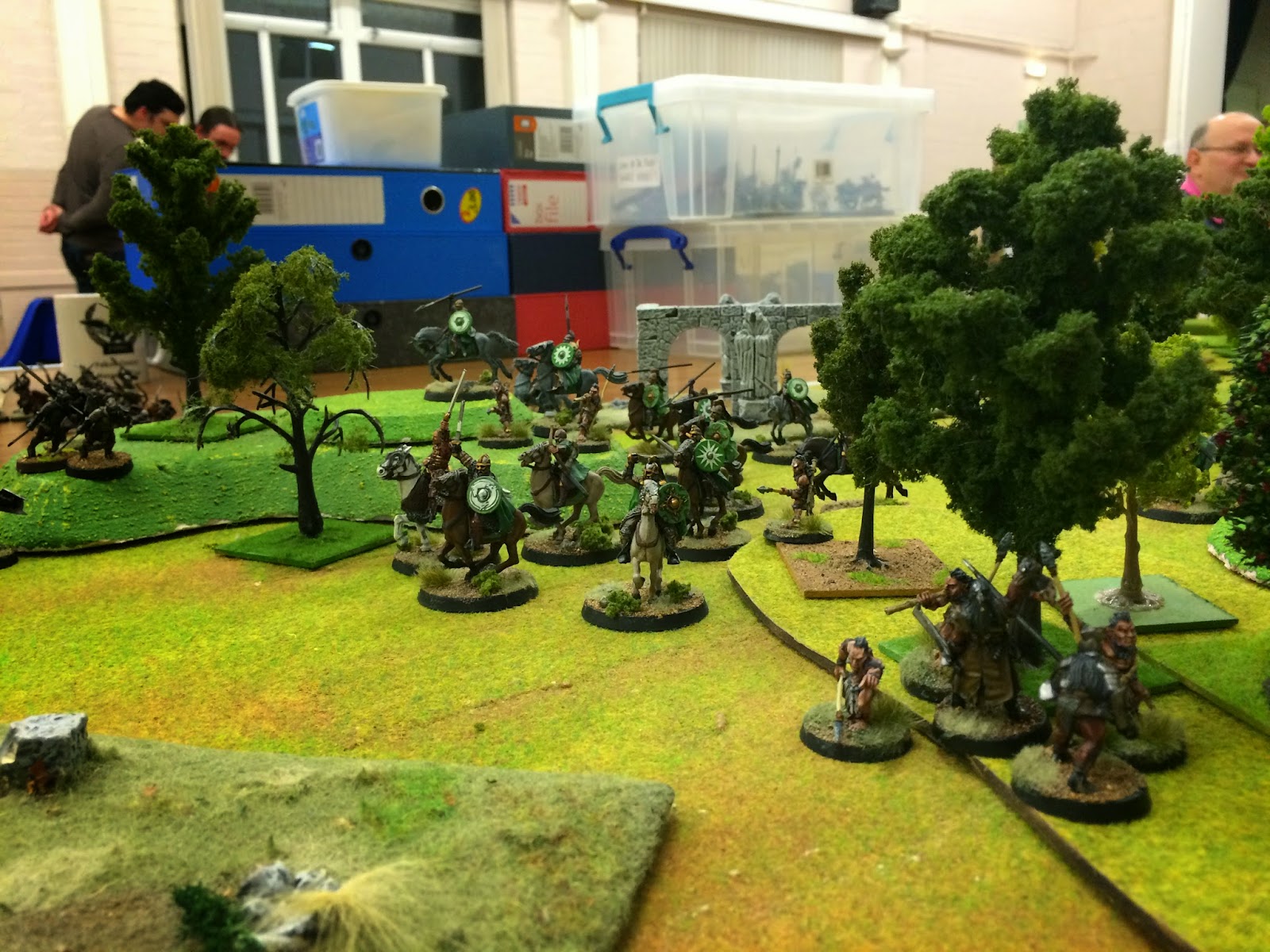 Theoden being the mighty hero that he is he promptly dug in his heels and led the headlong charge into the heart of the orc forces, trying to force his way through.  There was a lot of early successes from the good side and the orc casualties started to mount quickly, but it looked like there were going to be to many orcs to fight.  Rory decided to change his route of attack and Theoden led his troops over the hill and charged off the ridge into the orc forces, cutting down a lot of orcs and managing to exit the board, along with three of his warriors. 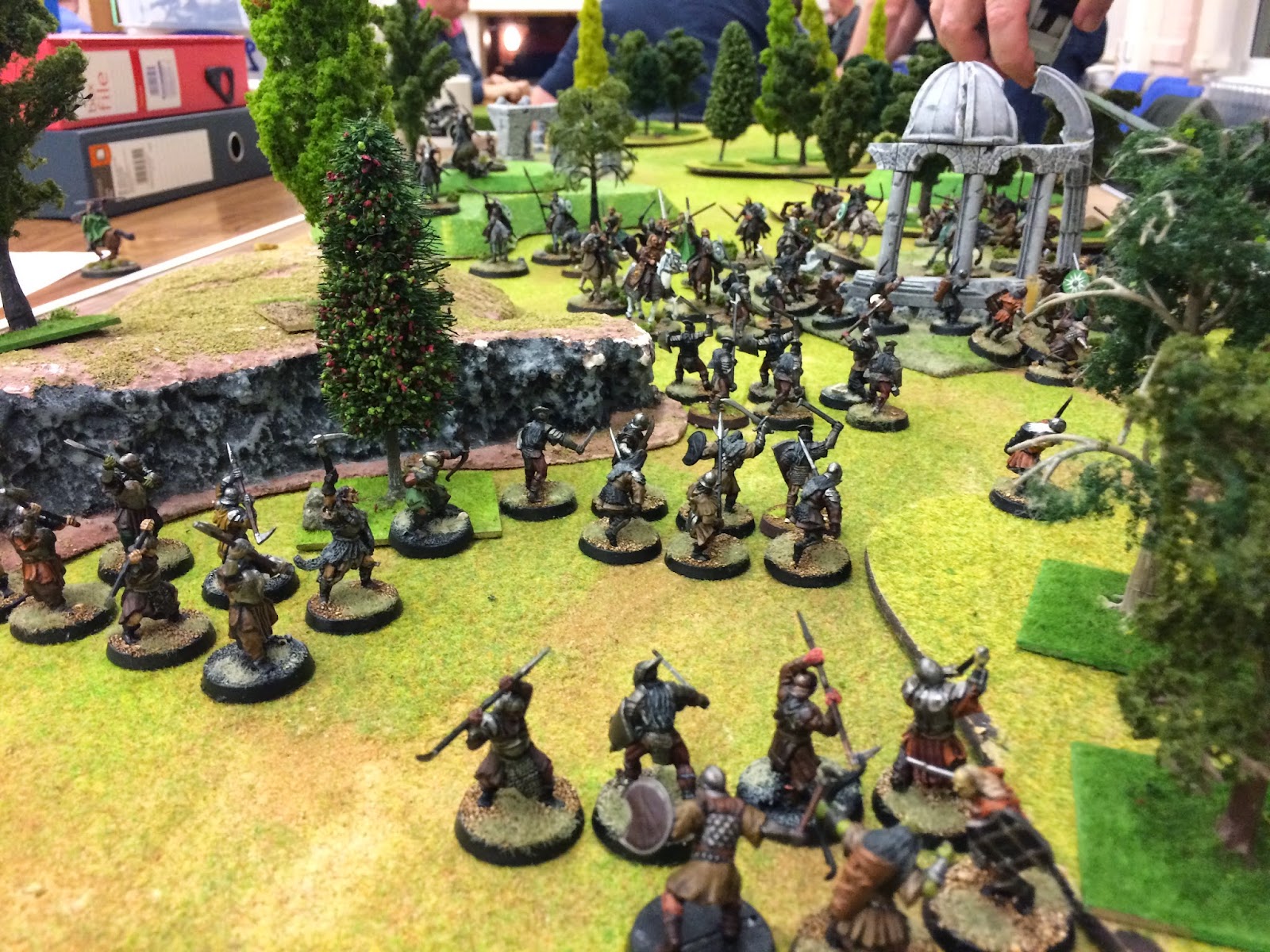 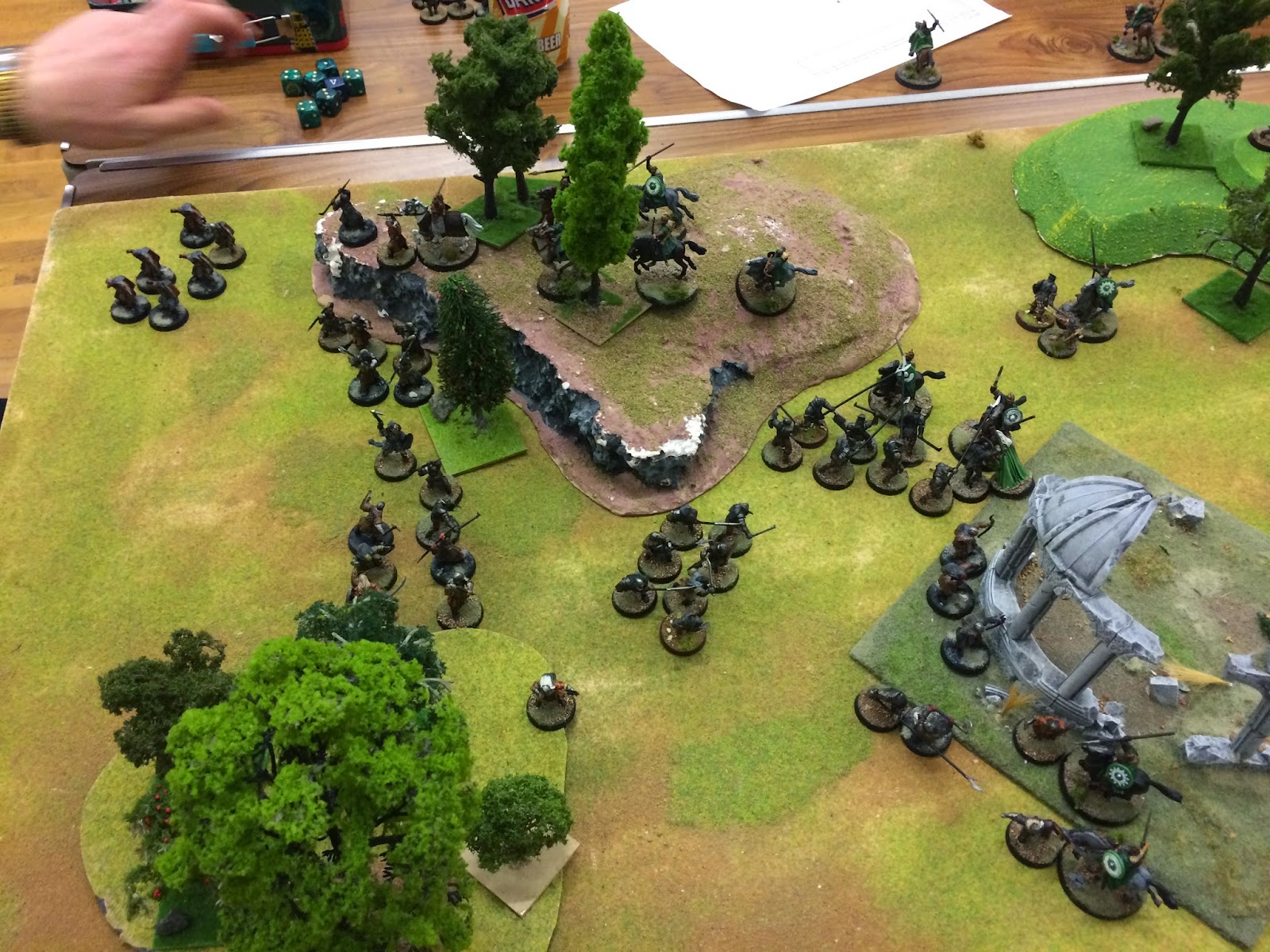 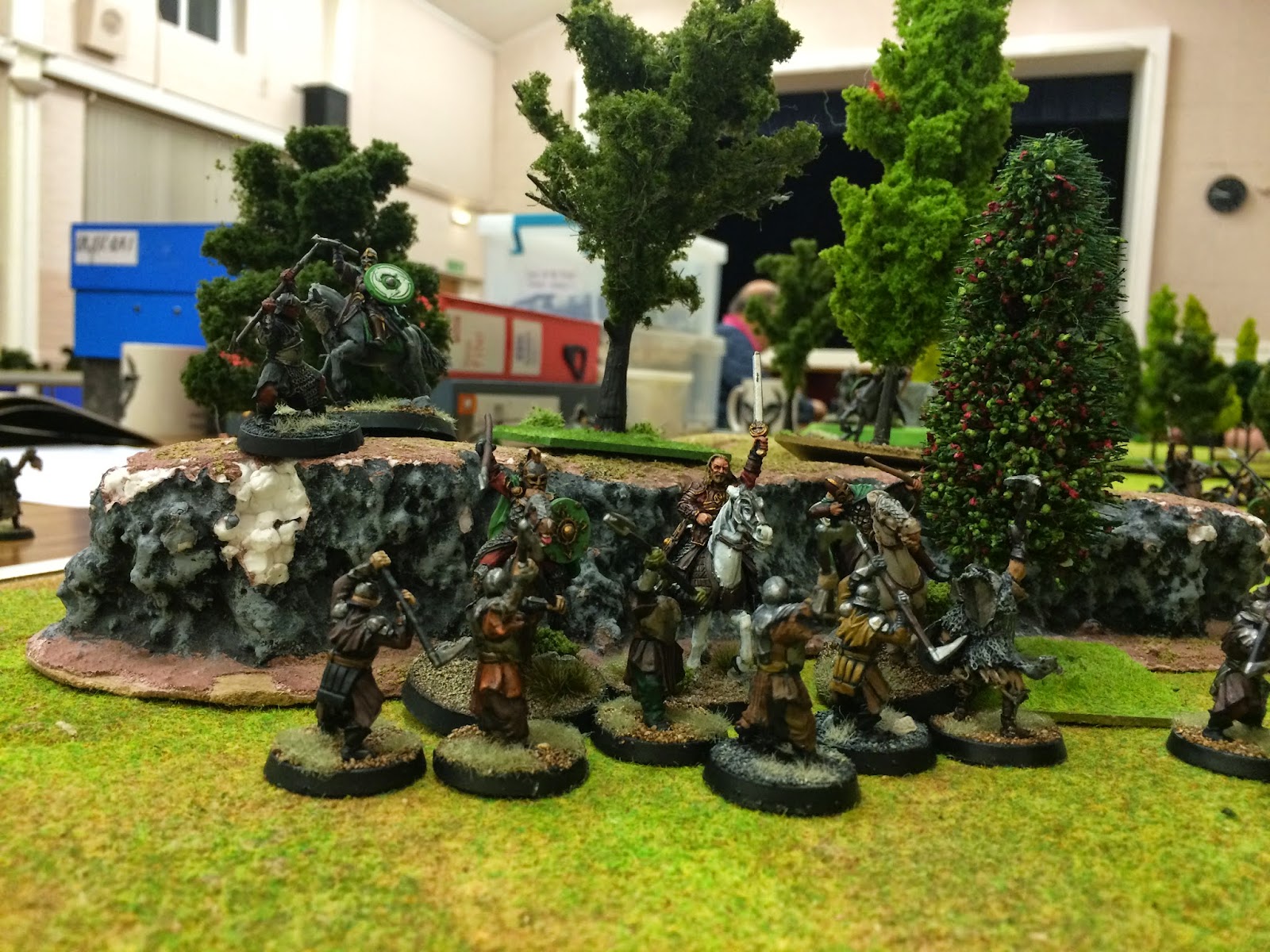 Alas the rest of the Rohan did not fare so well, and were soon overwhelmed by the orcs. In the end both sides were broken on the same turn and the majority of the remaining Rohan fled the field, leaving to few left for a Rohan win. We stopped at this point and didn’t bother rolling to see how many orcs fled the field as there was no point.
A good scenario, and in the end the Rohan gave a very good account of themselves, with nearly 40 orcs killed for the loss of 7 Rohan lost and 6 woses.  The only thing about this one is that it could be very easily be ruined by one player being a bit “gamey” in their approach, rather than playing in character.  I think the key to this one is to move the Wose ahead of the Rohan, making best use of cover to eliminate the orcs before the cavalry reach them as once the alarm is raised it is pretty much game over unless the good player has managed to get pretty close to the board edge.
Next week is another visit to Middle Earth, and we are probably going to have another go at this scenario.
Posted by Kevtheinx at 14:56