Make for the Tower!


This week Ian and I had decided to grab a practice game of Dux Britaniarum before the club campaign kicks of next month.  I have play a few games, but Ian has only managed to play once before so he wanted some practice.

We opted for the forces that we would be using in the campaign so I used my (much Romanised!) British and Ian brought his Scotti Raiders.  We rolled for a random raid and ended up doing a raid on a watchtower, where the dastardly raiders ambush a returning British patrol and try to abduct the noble leading it, while the Brits try and make for the safety of their watchtower.

In Dux B pretty much everything is random, including deployment.  I opted to take an all infantry force and started on the left hand side of the short board edge, while Ian got lucky with most of his force arriving in the vanguard, apart from one unit of cavalry and the skirmishers. His troops would arrive on the right hand side of the table, right at the bottom, so he would have a bit of chasing to do!


The game kicked off with a fairly predictable dash for safety by the British, closely pursued by the Scotti.  I managed to get a good head start, and with the rest of the Brits sallying forth from the tower to provide some flank protection to my fleeing patrol it was looking pretty good.

My troops made good time and at one point it looked like I might make it to safety without a single blow being struck, but alas the Scotti cavalry proved too fast.  Ian changed tactics and sent his cavalry up ahead to block the way to the tower, meaning I would either have to deal with the cavalry or turn and fight the advancing raiders.  In the end I opted to leave a few groups of troops behind to get in the way of the pursuing raider infantry and the rest of my force broke formation and ran for the tower. 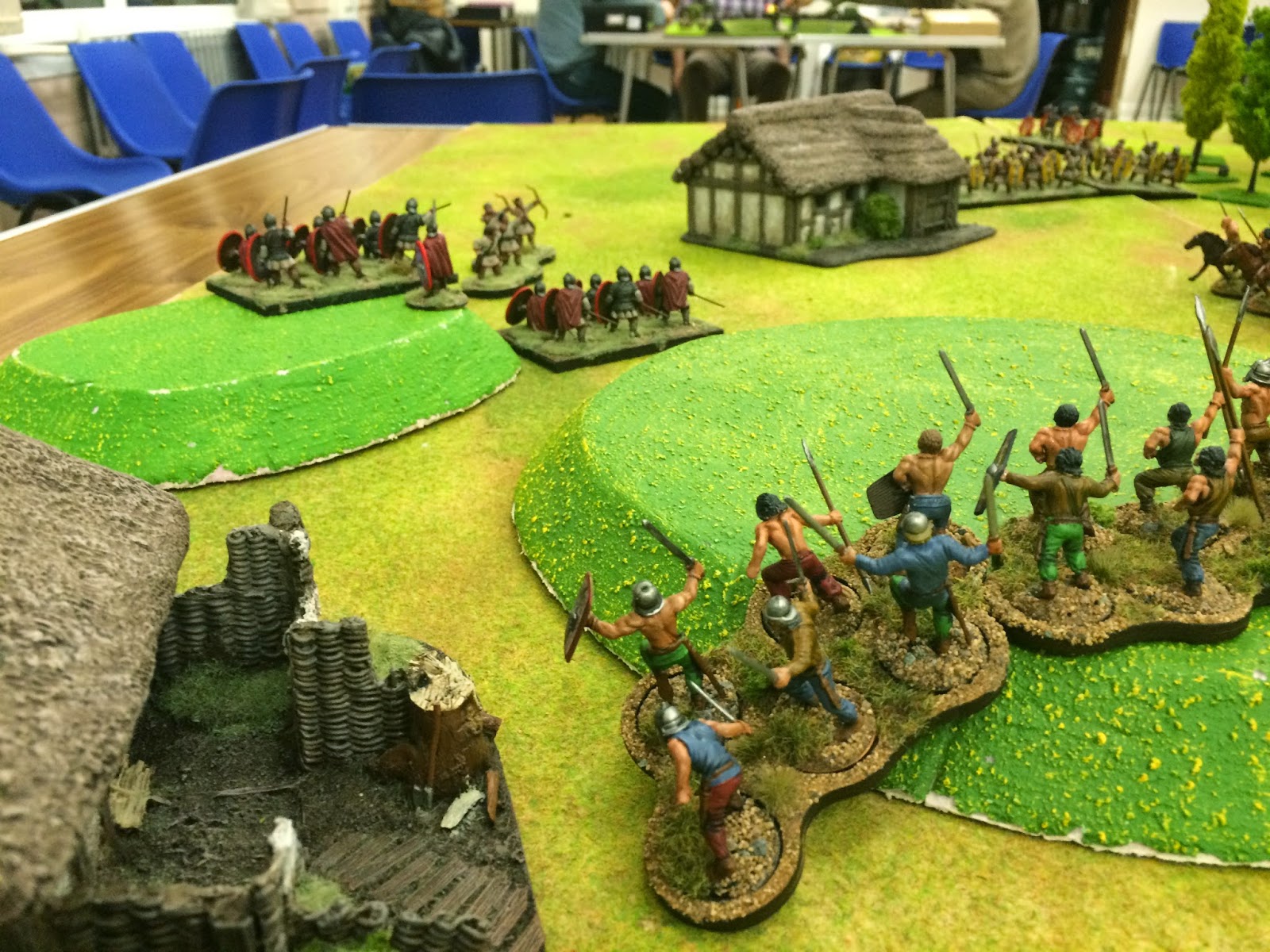 There was a brief scuffle at the tower while Ian tried to stop me with his cavalry. This resulted in one group of Levies being seen off but in the end I managed to see off both units of cavalry and get all of my nobles to the safety of the watchtower.  The two units I had left as a rearguard did not fair to well though, with both being almost wiped out.

In the end a British victory, but a costly one with 17 killed, against only 1 Raider. If this had been a campaign game it would have been a disaster, although I probably would have played it differently. Also in future I think I will put a compound round the watchtower itself and use that as the safe area, as there was a terrible logjam trying to get my troops through the tower door, which in the end is what caused most of the British casualties.
A good refresher of the rules, and an interesting game where the emphasis was on evasion and running rather than just fighting all the time.
Not a great omen for our impending campaign, and with only two British kingdoms, but 2 saxon, 2 pict and 2 Scotti players I reckon my kingdom (Strathclyde) is in for some trying times, but that also means I will get to play in a lot of games.
Posted by Kevtheinx at 14:14