Crusader publishing recently had a bit of a sale so Dave and I both picked up a copy of their fantasy rules, Legions of Battle.  These are based on the Crusader rules, but have been even more streamlined and the turn sequence has been tweaked slightly.

There are also no army lists in the book, but a system to work out profiles and then assign them a points value.  The stat line is a fairly standard affair consisting of Combat Skill, Missile Skill, Might, Protection, Wounds etc etc.  You assign your profile to each stand, which is roughly a 40mm square and put the stands together to make units, with a unit being 4 or 6 stands.    This unit then operates as one entity until such time as they run out of wounds (wounds per stand multiplied by the number of stands) or you fail a morale test after coming of worse in close combat.  It was all pretty standard stuff and had a very Warhammery (is that a word?) feel to it, but perhaps being a bit faster to play.

Using the example profiles in the back of the book I knocked up two army lists. One for Dave’s chaos warriors and one for my Orcs and Goblins. These are both Warhammer Fantasy armies so I tried to match the profiles as closely as possible to their Warhammer equivalents.  Two army lists were put together for out trial game, leaving out all magic for our first outing so we could get an idea on what the core rules would be like.  In the end our armies ended up being 8000points each.

We opted for a pitched battle and lined up our forces agains each other. Dave line up across the board with his heaviest troops in the centre and light troops on the flanks, and I did much the same apart from putting my 2 bolt throwers on a hill on my right flank 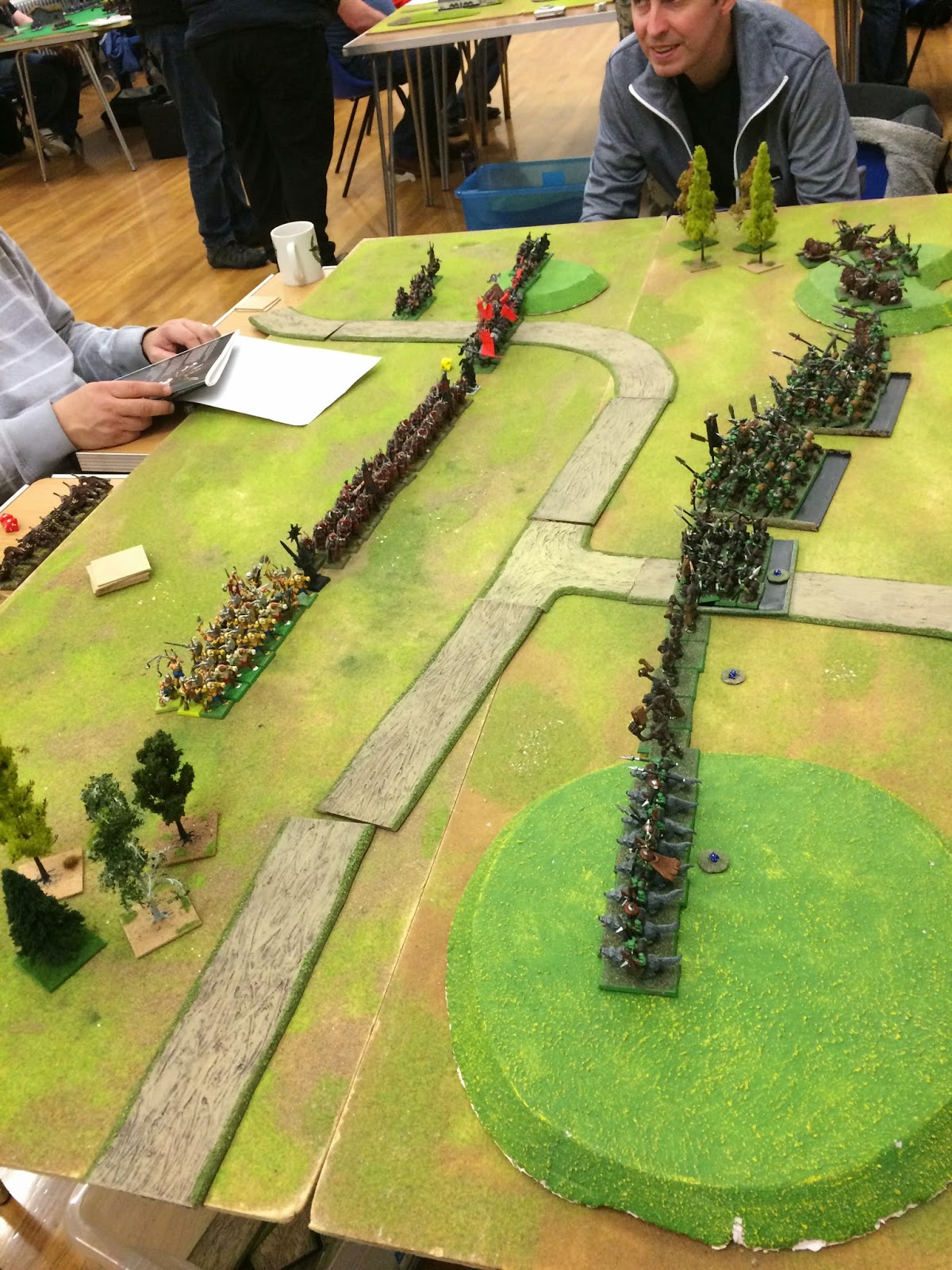 We got off to a quick start, with Dave charging my trolls with his Marauder Horse and Chaos Hounds. I in turn piled in with my Goblins and Wolf Riders, making for a very large combat on my right flank. Dave came off worse in this large melee and had to make break tests for his troops. In Legions of Battle the winner of any combat gets to test against their opponents T&L rating, adding the amount that he won the combat by to the scores. If he beats his opponents T&L rating then the units he is rolling for is routed and leaves the table.  Pretty brutal.  In the end both of Dave’s units failed their tests and were removed from the table.

Turn two and the two battle lines advanced towards each other. There was not a great deal of space available so not too much fancy stuff going on, as the two lines tried ot get into combat.  Dave’s chaos Knight charged into my Boar Riders, who counter charged but in the ensuing combat I received a lot of casualties while inflicting none in return and predictably Dave managed to roll higher than their T&L score causing the whole unit to flee the field. 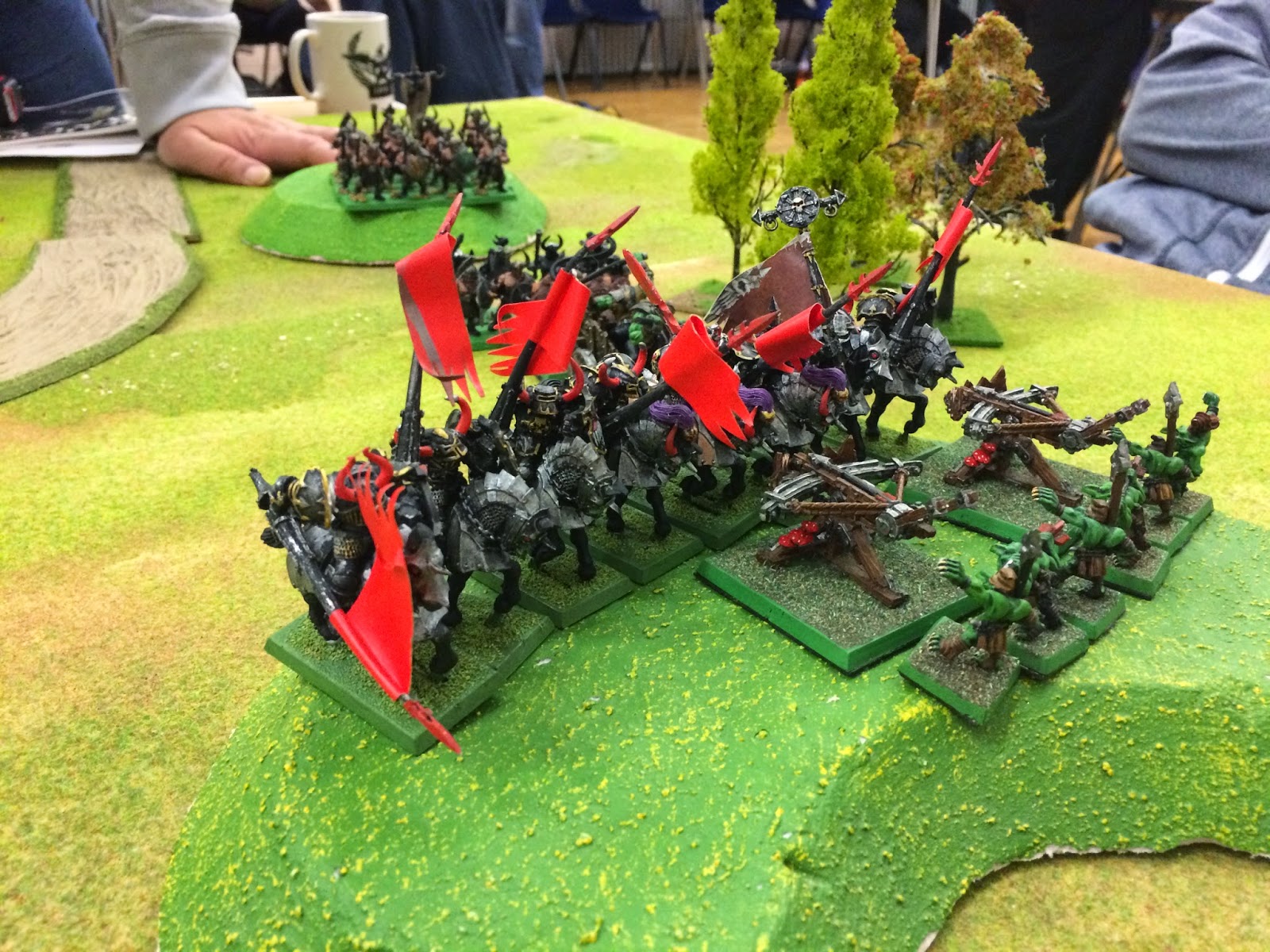 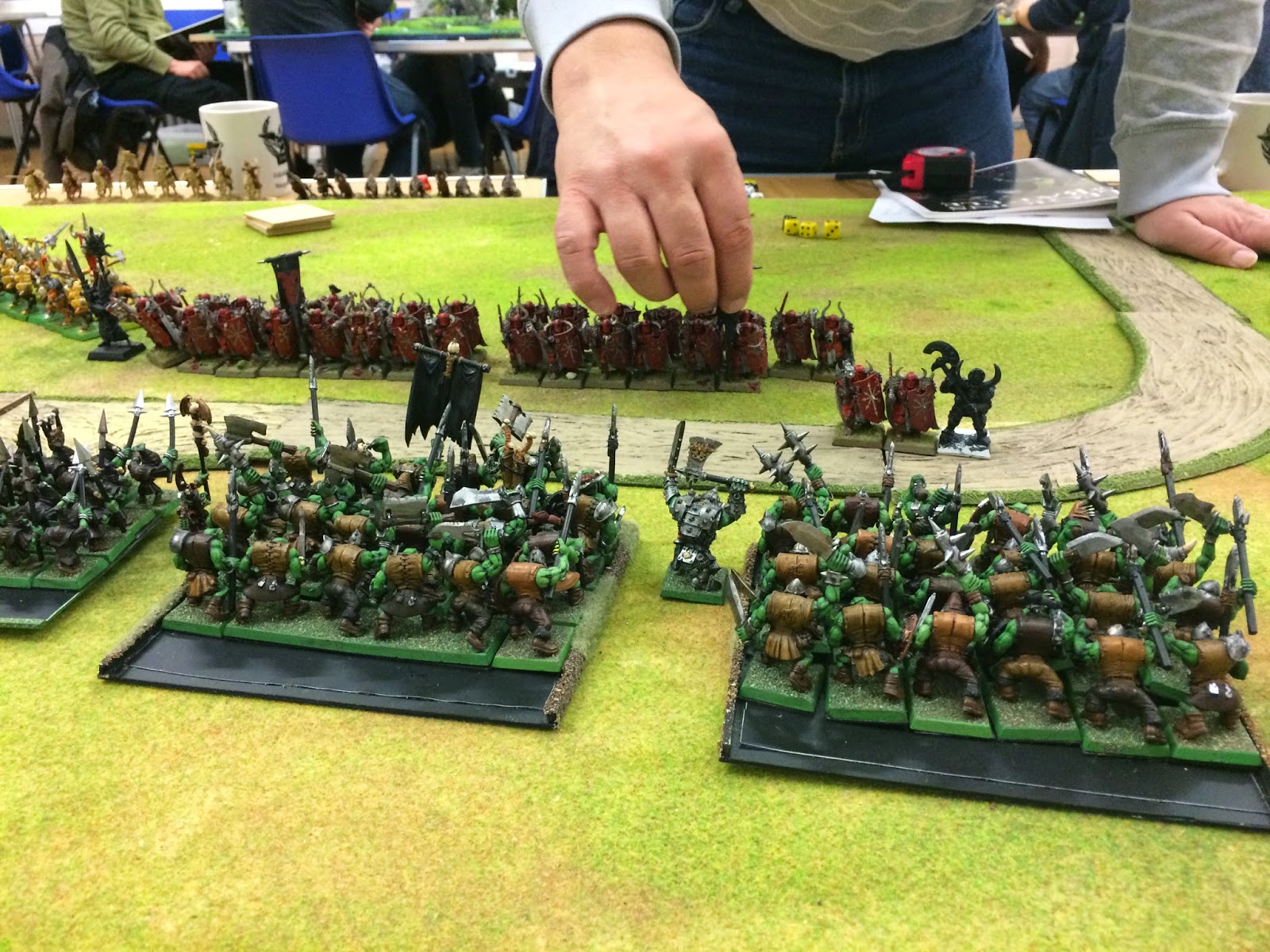 Turn three and the two lines finally clashed, with Dave charging everything into combat, leaving the entirety of both sides engaged, with eth exception of my wolfriders.  In the ensuing combat Dave’s troops proved to just be to tough for my orcs and all of the combats were very one sided, with the exception of the Trolls, who managed to hold their ground. Every unit in eth Orc army was totally outclassed, pretty much wiping me clean of the board in own turn of combat.  Not a great result.

In the post game pondering we decided on a few things:
You need a big table as ther is no real advantage to deploying deep when you can get more attacks for going wide.
Combat resolution is a little bit to brutal.
The movement rates given to the troops on both sides were too high
The Combat Skill stat is too powerful. In a lot of cases Dave was hitting me on 2’s due to having a higher CS and the +1 to hit for charging, while I was hitting on 5’s or 4’s.
There is no explanation in the rulebook as to how a counter charge would work.

Our reaction to the game was muted. It felt a lot like Warhammer, but even simpler so if the game feels like Warhammer then why not just play Warhammer? WHFB is going to go the way of the Dodo very soon so I hope there will be some sort of community driven take up of the rules, in the same style of Epic. I think the game would better for not being used as a mechanism to drive sales of model soldiers.
As for Legions of Battle?
We said we woiuld give it another try at some point in the future, but I suspect we will be in no hurry to do so.  We have decided to give Kings of War a try next to see that that is like.
Posted by Kevtheinx at 15:11

Email ThisBlogThis!Share to TwitterShare to FacebookShare to Pinterest
Labels: Legions of Battle