I havent managed to update on my games for a few weeks now so will cover the last couple of weeks in one blog post. Work and home life have been rather hectic.

Ill start with Monday just passed game.  Ian and I decided to have a game of X-Wing just before he headed back offshore for a few weeks.  I dont own any X-Wing stuff at all so was quite happy to let Ian come up with something to do on the night.

Ian had found an interesting scenario on the web that consisted of a rebel squadron tryign to shhiot down the shields on an Imperial Star Destroyer, so that an Ion Cannon can cripple it, allowing a local rebel convoy to evade capture.  Ian supplied two randomly selected fleets and we tossed a coin for sides. I ended up with the rebels, which consisted of the Millenium Falcon with Luke Skywalker, Wedge Antilles in an X-Wing, and another excellent X-Wing pilot whose name I cant remember.

Ian's Imperials consisted of 4 Tie Fighters and one Tie Advanced (the ship Darth Vader flew in the first one). We deployed on opposite ends of board and put the Star Destroyer in the middle.  I had to do either 25 points of damage to the Destroyer, or 12 points to the shield generator on the back of the ship. 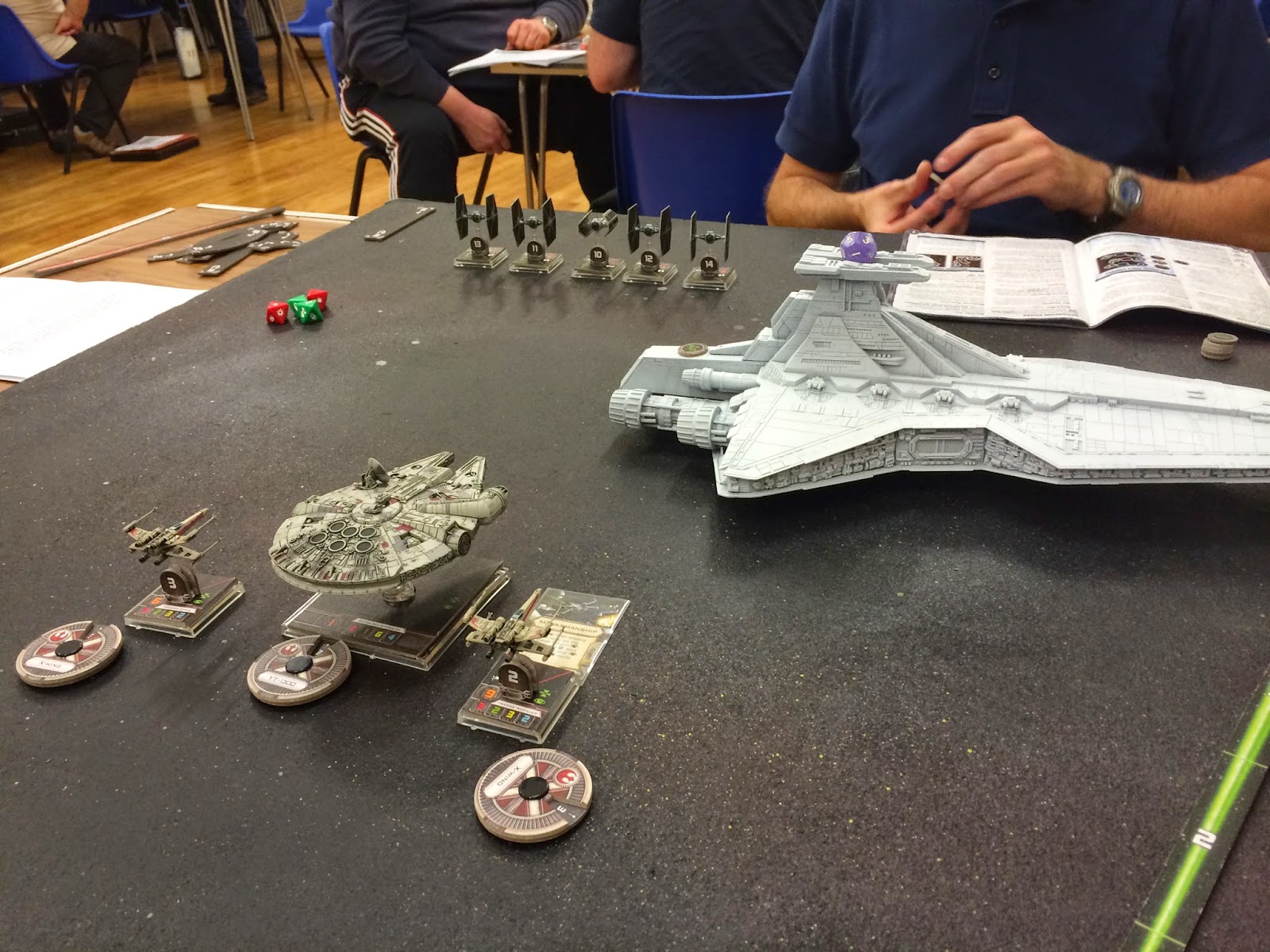 It turns out out that thanks to the distance and the special abilities of the pilots on my side I had pretty much done that before the IMperials got within firing range.  We reset and tried again, this time altering the deployment. The second time was no different and I again managed to down all of the shields before the Imperial Tie Fighters were in range.  We decided to have a cup of tea and think about the problem.

For our third attempt we decided that I would deploy my squadron, and then Ian could deploy his ships in reaction to that, as long as they stayed within short range of the destroyer.  This was a much more balanced game, with my squadron having to fly through the imperial defences. I managed to pull of a win, but only just.  The MIllenium Falcon and Wedge did not survive the engagement though.  A good evenigns entertainment playing a good game.  Made all the better for playing a narrative scenario rather than just duking it out in the middle of the table.

Going back to the Monday before I managed to have a absh at Lion Rampant, the new medieval rules from the same author as Dux Bellorum.  Andy and Dave had already tried the rules the previous week and had decided to make it a but more skirmishy by using one miniature to represent each unit and record the number of hits that you can take before the figure is eliminated. The scenario had Rory and me guarding a caravan of treasure and a few monks, while Andy and Dave were the evil bandits trying to steal it.

The main problem with Lion Rampant os that you have to test to move anything, and if you fail the test you turn immediately stops.  Rry and I are not the luckiets of fellows so quite quickly the two of us sat there in frustration as we kept failing to move out troops, while the wagon we were supposed to be guarding disapeared into the distance. 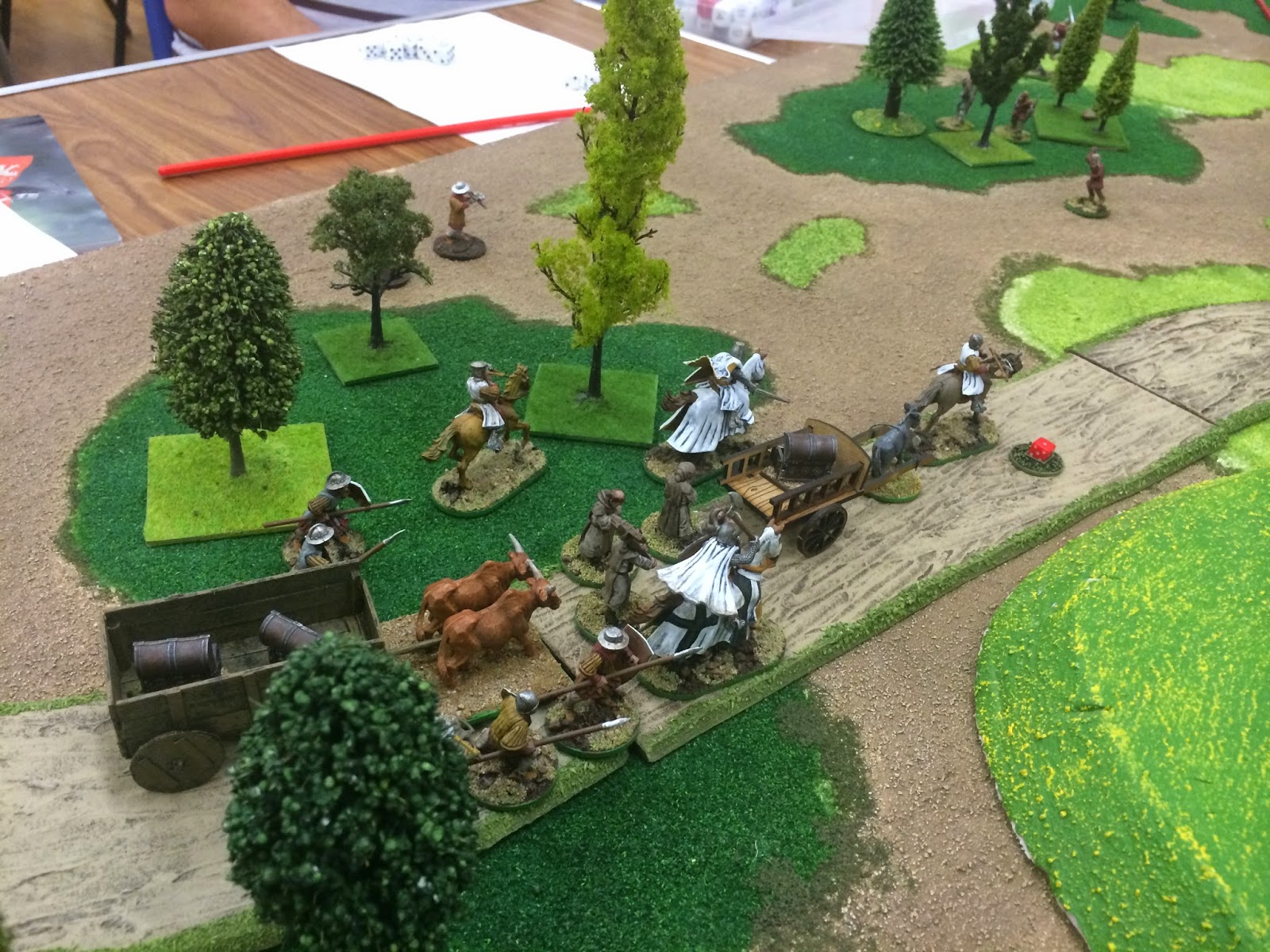 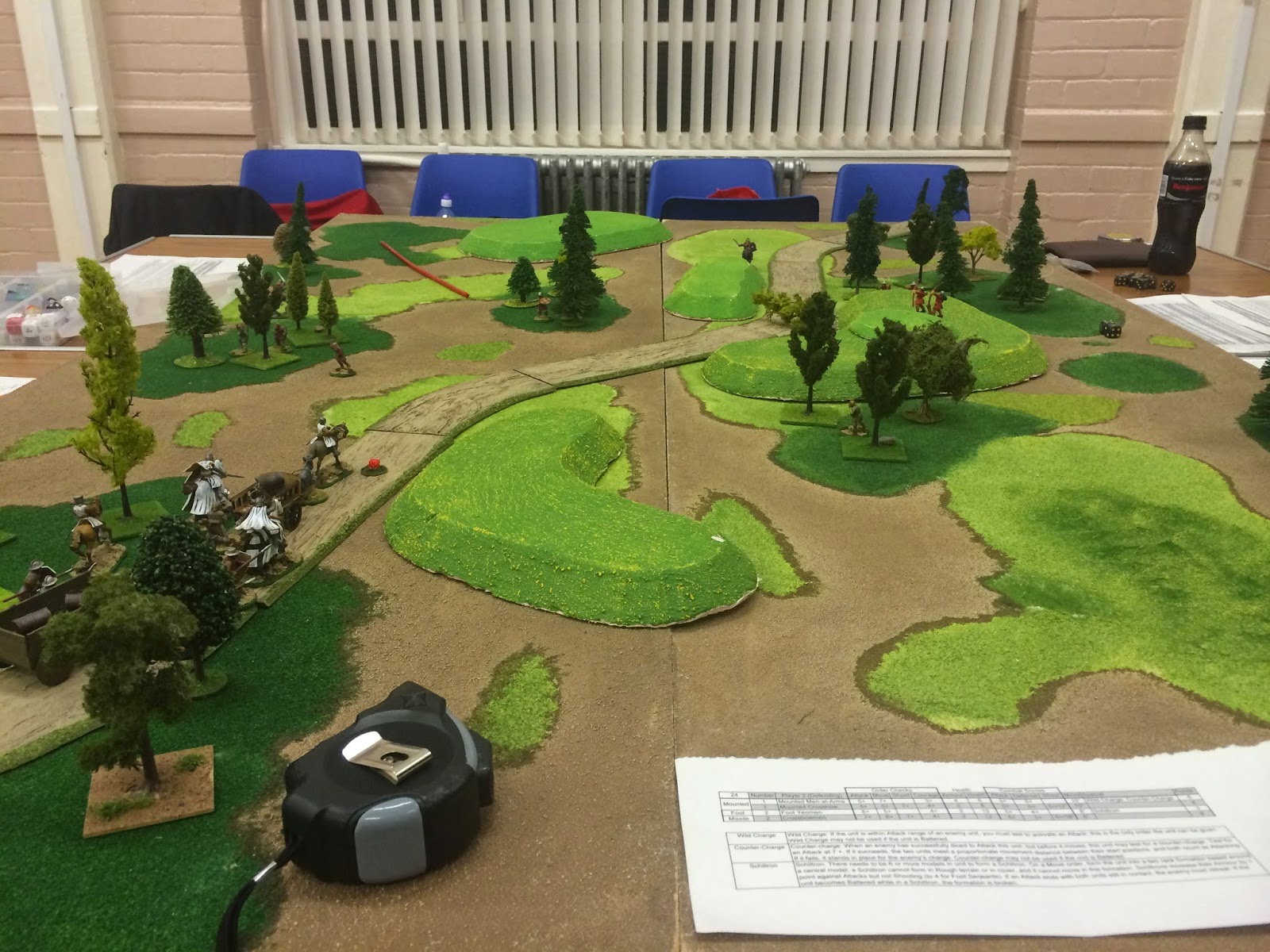 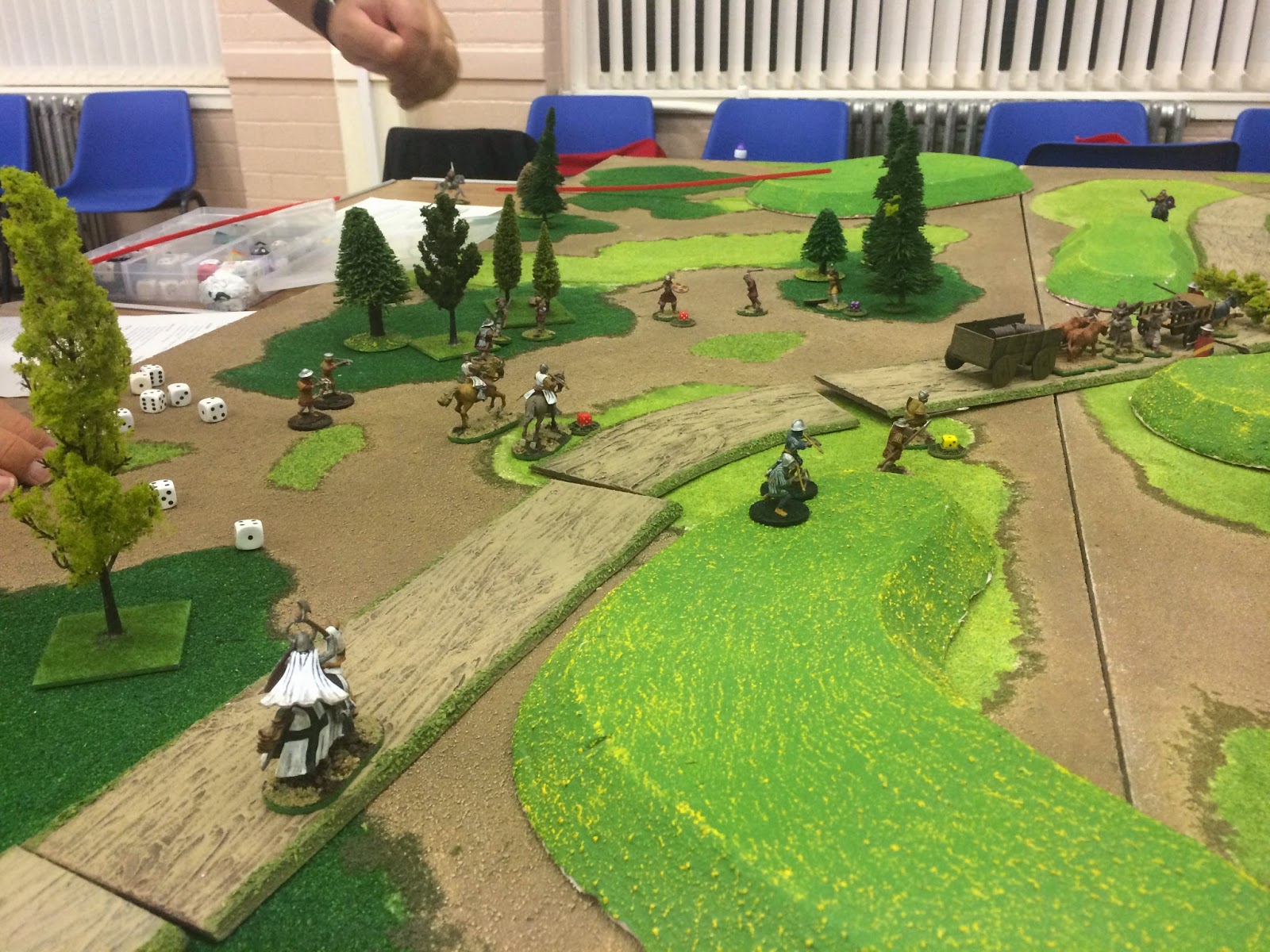 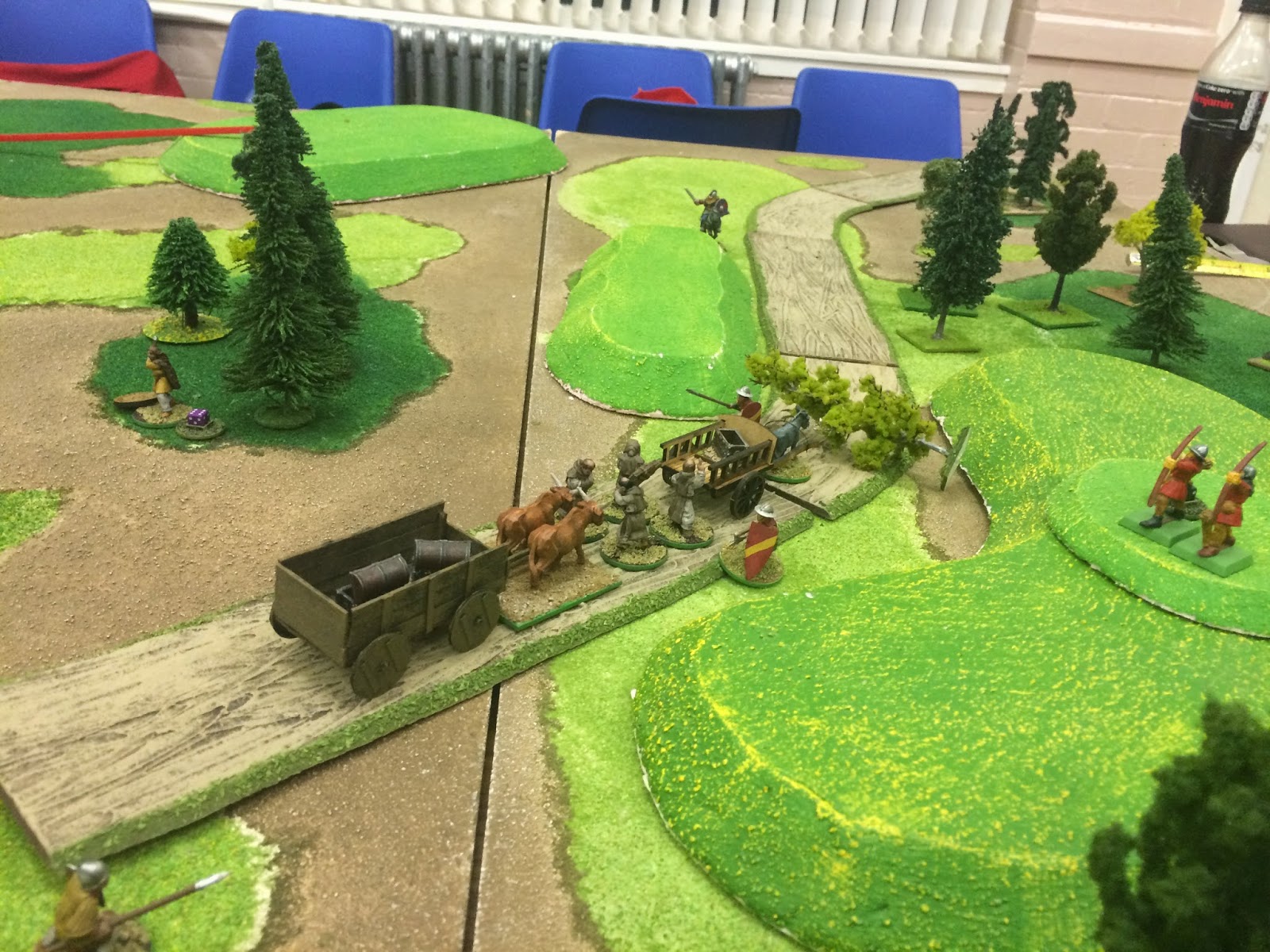 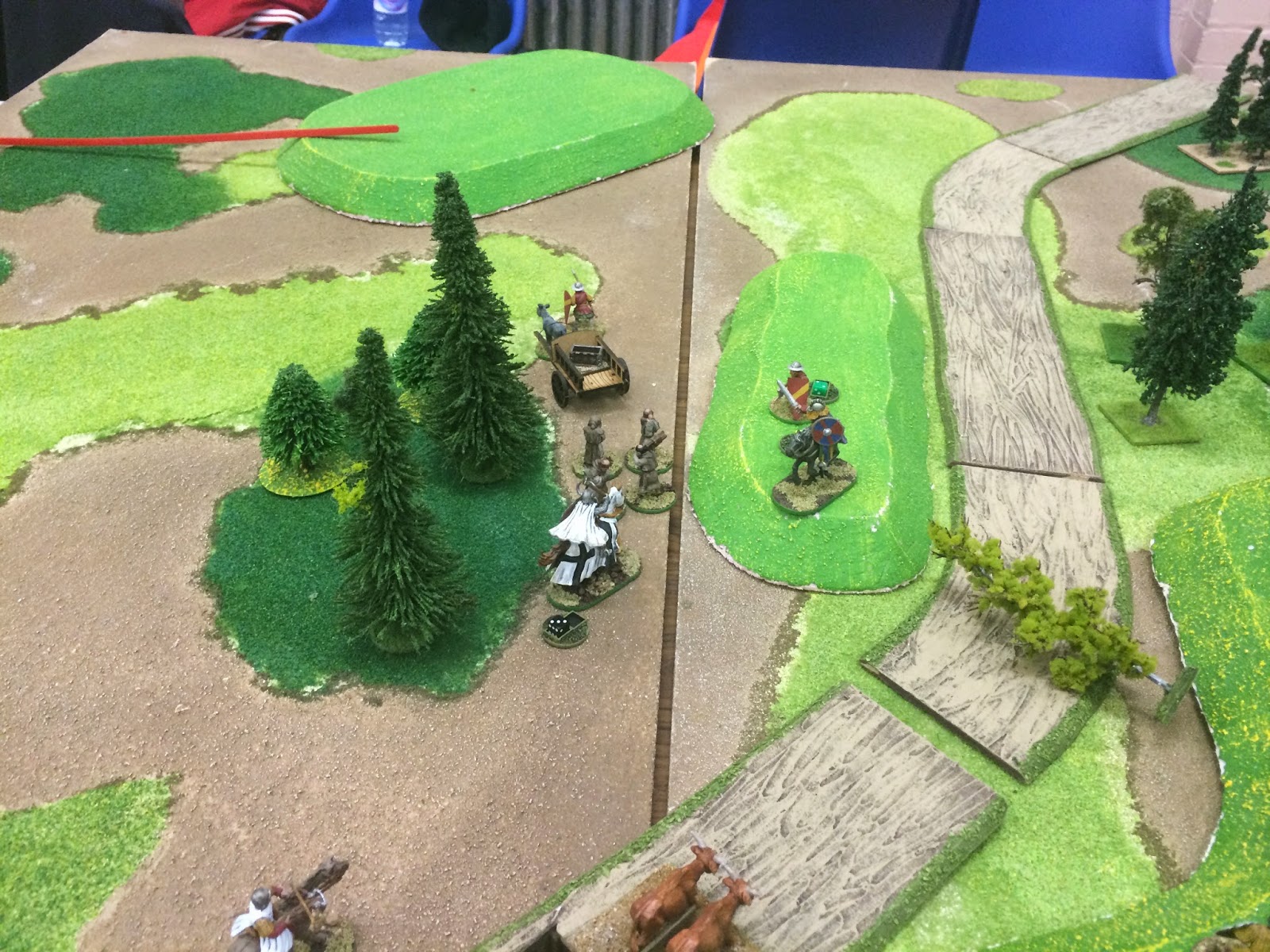 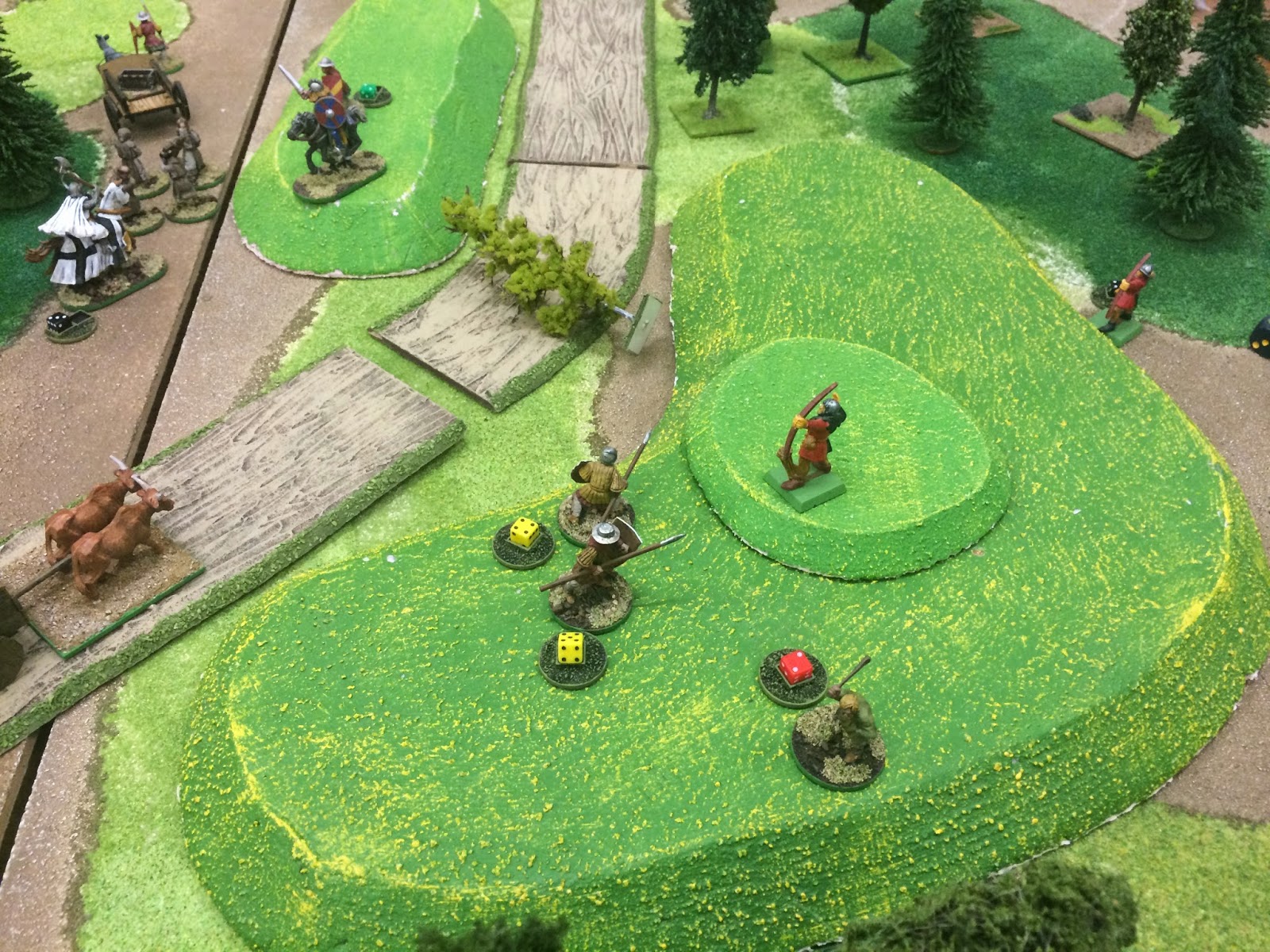 I found this game to be extremely frustratin as it wasnt until the later stages of the game that I managed to actually get my troops to move, by which time Andy had pretty much run off with the loot.  There were some very odd things in these rules but the most annoying thing was the inability to move your troops. I am all for the fog of war and a bit of randomness but not to the point where moving a single unit of troops can be ragrded as a success. That is one of the reasons I gave up on Warmaster.  Games like Dux B do this much better, using a random order of activation and random move distances to better simulate the dificulty of controlling your troops in combat, but at least they will move and do something!

Targe on Saturday, but hopefully it will not be too expensive a day out, and then game two of our Necromunda campaign next Monday. Looking forward to it.