Things are starting to get back to normal at home, sort of, ish.

Ian and I decided to have a game of Chain of Command this week. This would give Ian a chance to use his Americans,  as most of the games that he has played so far have been using the French in early war scenarios.

We rolled for a random scenario and got the delaying action.  In this one the defender has to prevent the attackers from catching a jump off point t one end of the table, with the game being played lengthwise down the long edges.  We also rolled a die to see who would be the attacker, with the Germans making the assault. I also rolled the maximum 10 for support. 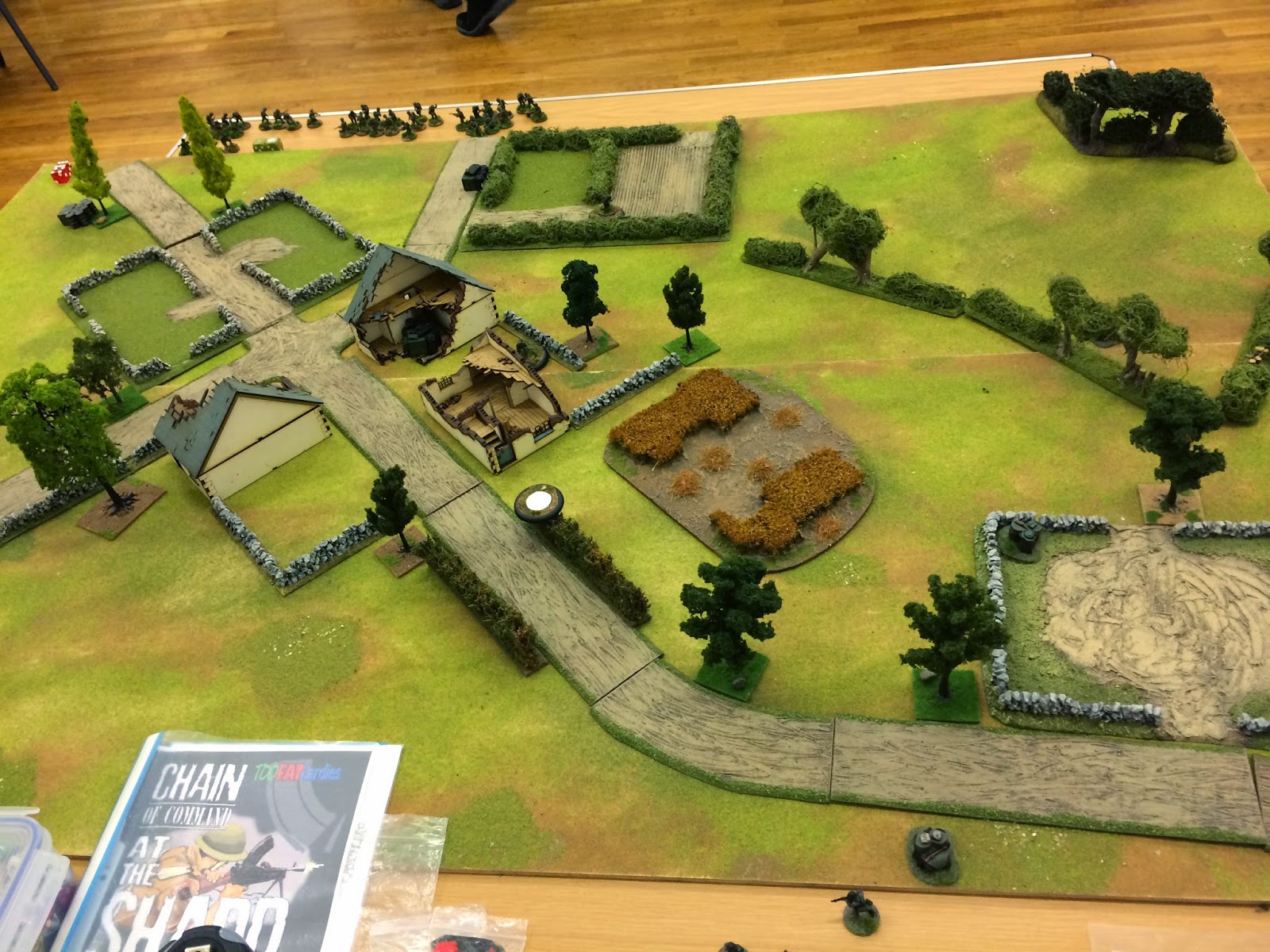 I opted to take a pre game barrage, a heavy machine gun, a 2nd Senior officer and a flamethrower team.  Ian opted for an adjutant and a spotter for an off table mortar battery.

The Germans got to kick of the action, with a single squad deployed in the centre to test the American defences. I hoped that the pre game barrage would prevent the Americans from deploying properly, giving me the chance to get up into the central buildings before they managed to get a defensive position set up.  This did not exactly go to plan as Ian's first set of activation dice came up with three sixes, ending the turn and also my pre game barrage.


Ian deployed one squad into the centre and another in a field on my left flank, setting up some very effective firing lines.


I started to advance up my right, and also sent a squad of riflemen up the centre, with the HMG team providing cover.  In a flurry of 6's Ian managed to get three phases in a row, and made a mess of my right flank advance, and inflicted some shock on the rifle squad advancing up the centre.

My advance was going wrong and I had not even fired a shot yet!

The one ray of sunshine in all this was that Ian had called in a mortar barrage, ended the turn before it had landed and when he tried to call it in a second time they were unavailable as they were busy elsewhere.  That was going to make things a bit easier.

In an effort to even things up I deployed my HMG team in the centre where it would have a good line of fire to cover my right flank and also deployed another full squad on my left, catching the Americans in the open and causing some casualties.  After assessing the situation Ian opted to withdraw from his forward position and regroup in the fields behind the ruined buildings. 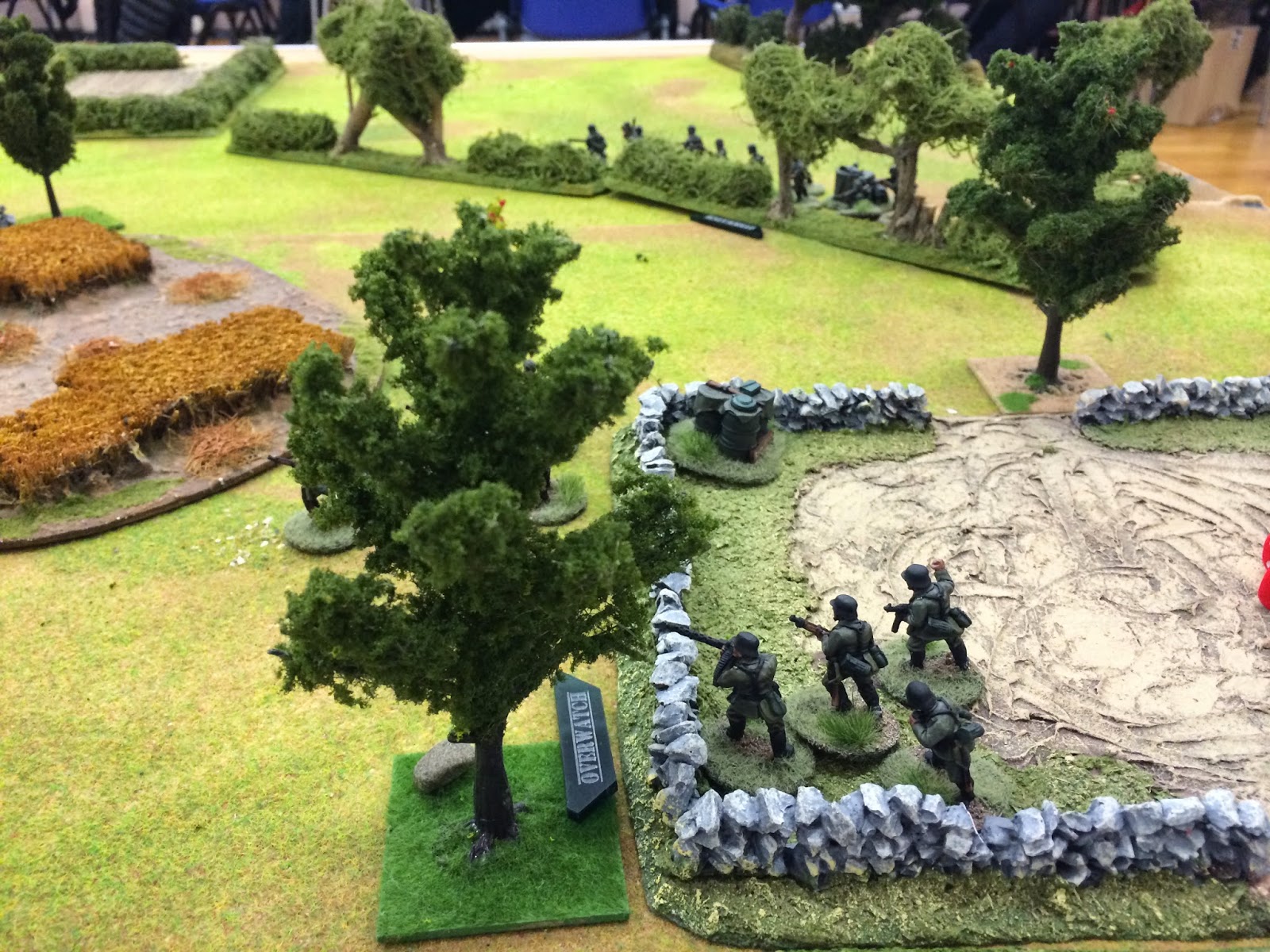 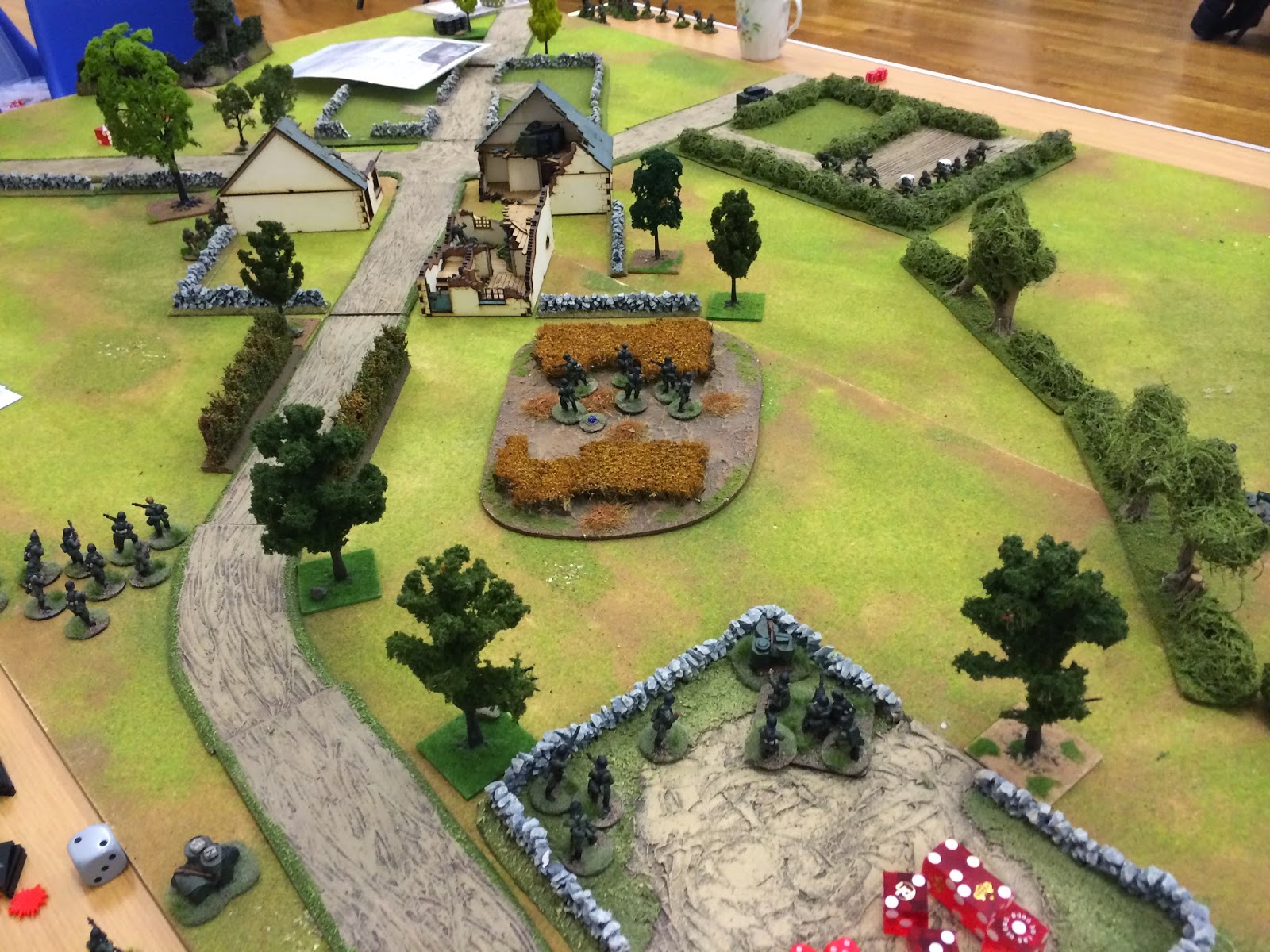 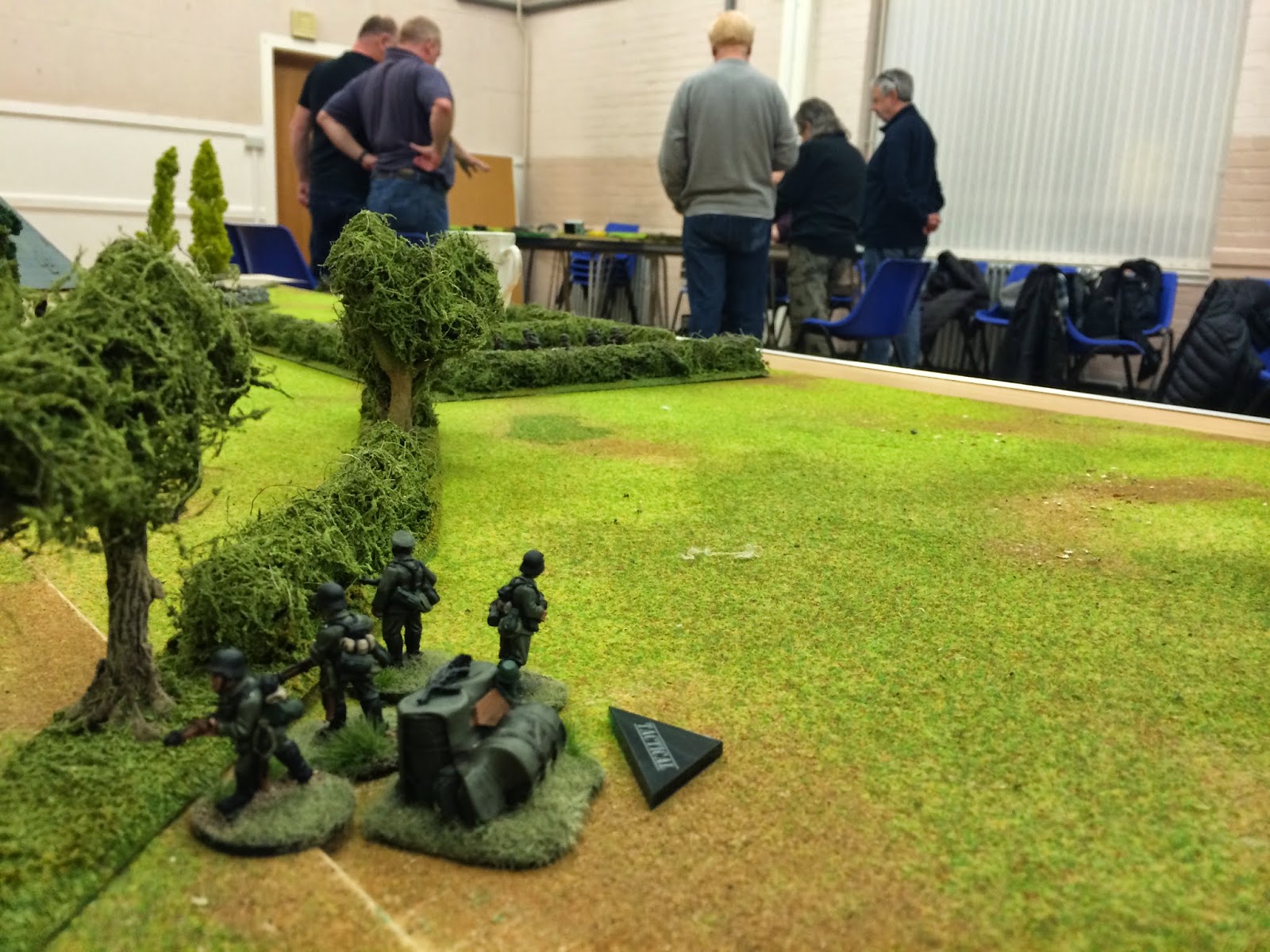 Annoyingly he left 4 men hiding in a building in the middle of the table, and with no clear line of sight and them sitting on over watch I was unsure about how to root them out.  In the end after a few phases of moving and reshuffling on both sides I obtained a Chain of Command die and used it to deploy the flamethrower in an ambush and roasted the lot of them.

This opened up the table for the advance but alas we had run out of time.  I was late turning up and we had not played the game for a while, which made it slow going.  At the end it was still anyones game and could have easily gone either way. Both forces were relatively intact, and the Americans were in a decent position, but there was also enough cover to let the Germans advance to within close range.

This was an interesting game and a very different experience to my usual games of Chain of Command.  Usually my games are decided by a steady stream of firepower, withe Germans ability to lay down lot of fire with they Machine Guns being the deciding factor.  This game had a lot of manoeuvring and we spent a lot  of time staring at the boards and trying to work out what to do.  On my part I was trying to work out how to get through the American positions and force them to withdraw, while Ian to his credit as soon as he saw his position was compromises he withdrew to stop his force form being outflanked and outgunned.

A very enjoyable game and very different form our usual fare.  I really enjoyed all the moving for position that went on in this and it made for a very interesting game.
Posted by Kevtheinx at 13:39