So this Monday Ian and I opted to have a game of Dux Britaniarum.  I have not played Dux B for a good while, and this would be Ian's first game.

Ian opted to use his painted Celts as Scotti Raiders, and I took on the role of the stout British defenders.  This was going to be an interesting game as I did not know Ian had intended to use his Celts and so had done some revision of the main rulebook, but not of the Raiders supplement.

The table was set up as shown in the photo below, with the village that Ian was raiding set up in the top right of the table. 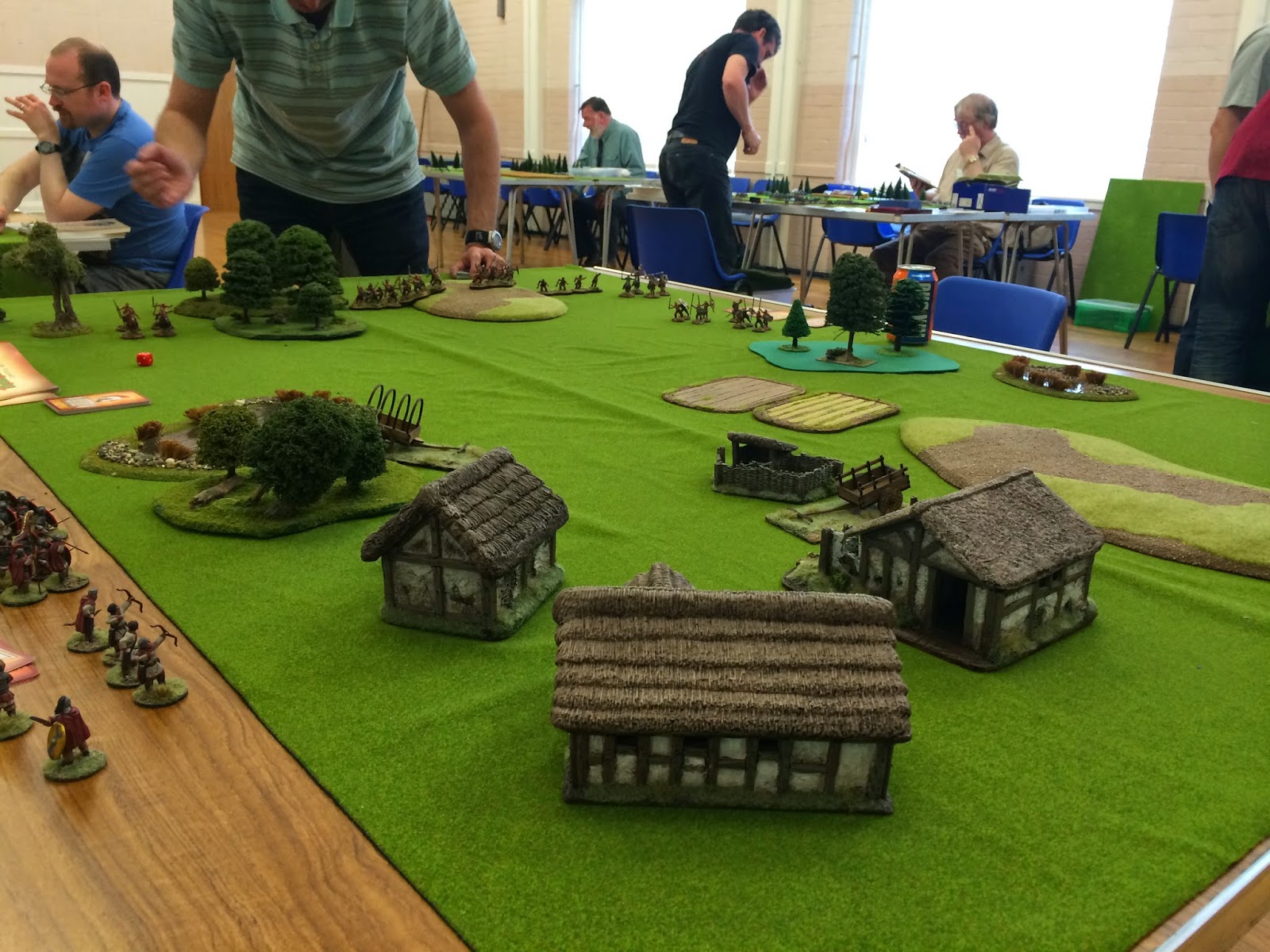 The Scotti force is slightly different from the Saxons, as they contain two units of cavalry, lots of skirmishers and a new troop type called raiders, who are quite hard to kill but very susceptible to shock

Early game saw Ian advancing as quickly as possible, while I tried to get my force moving through the village buildings. 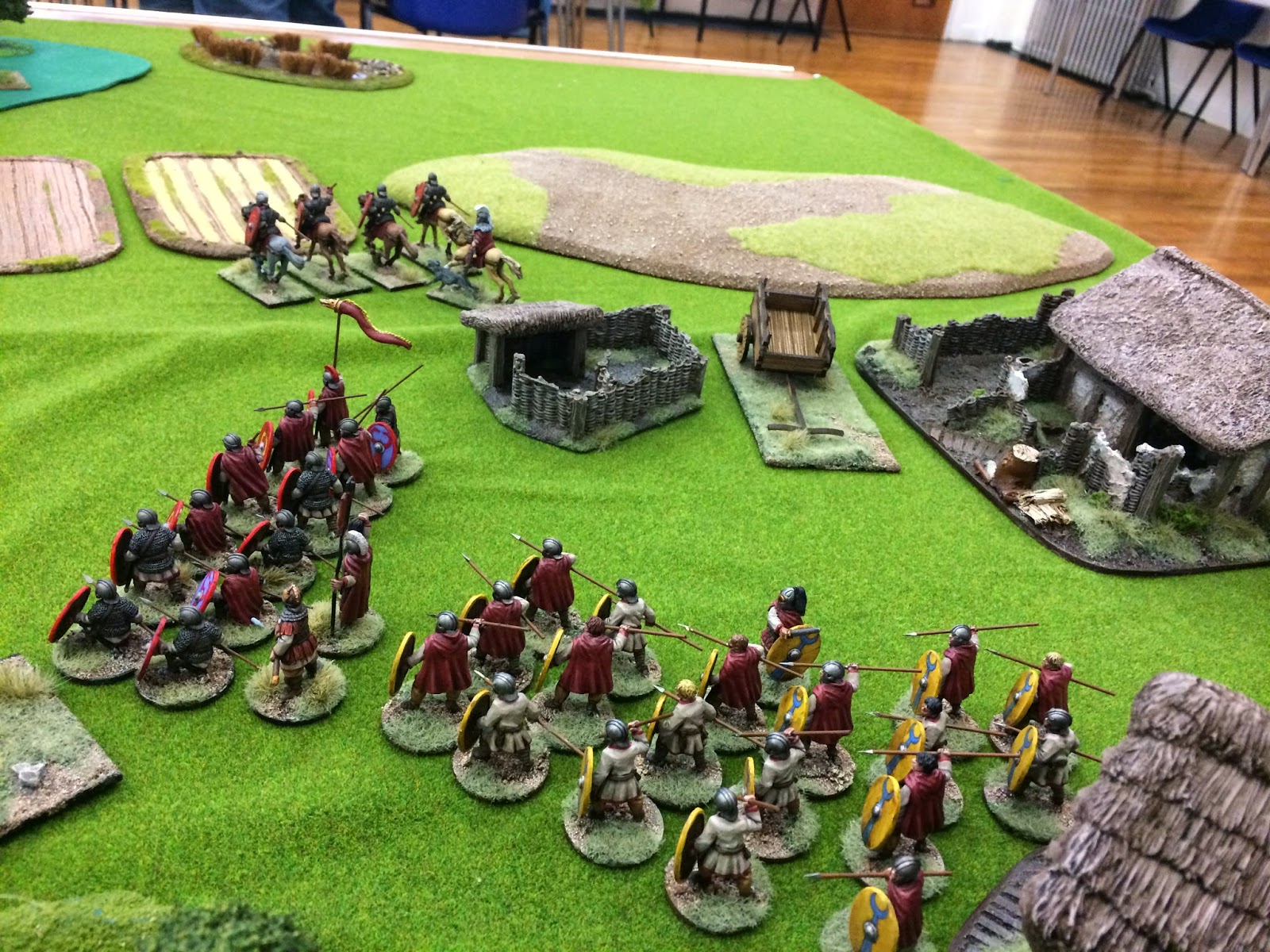 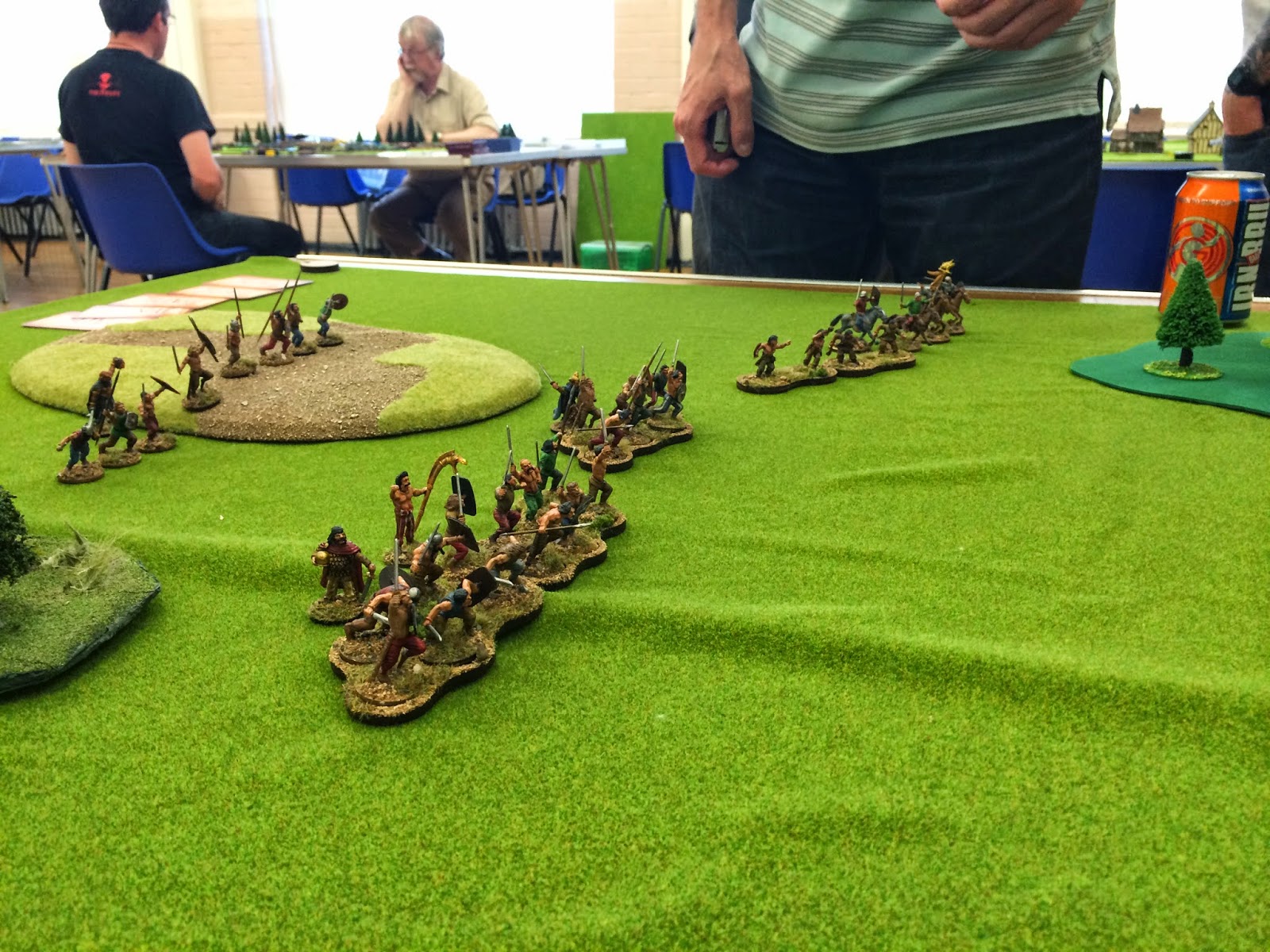 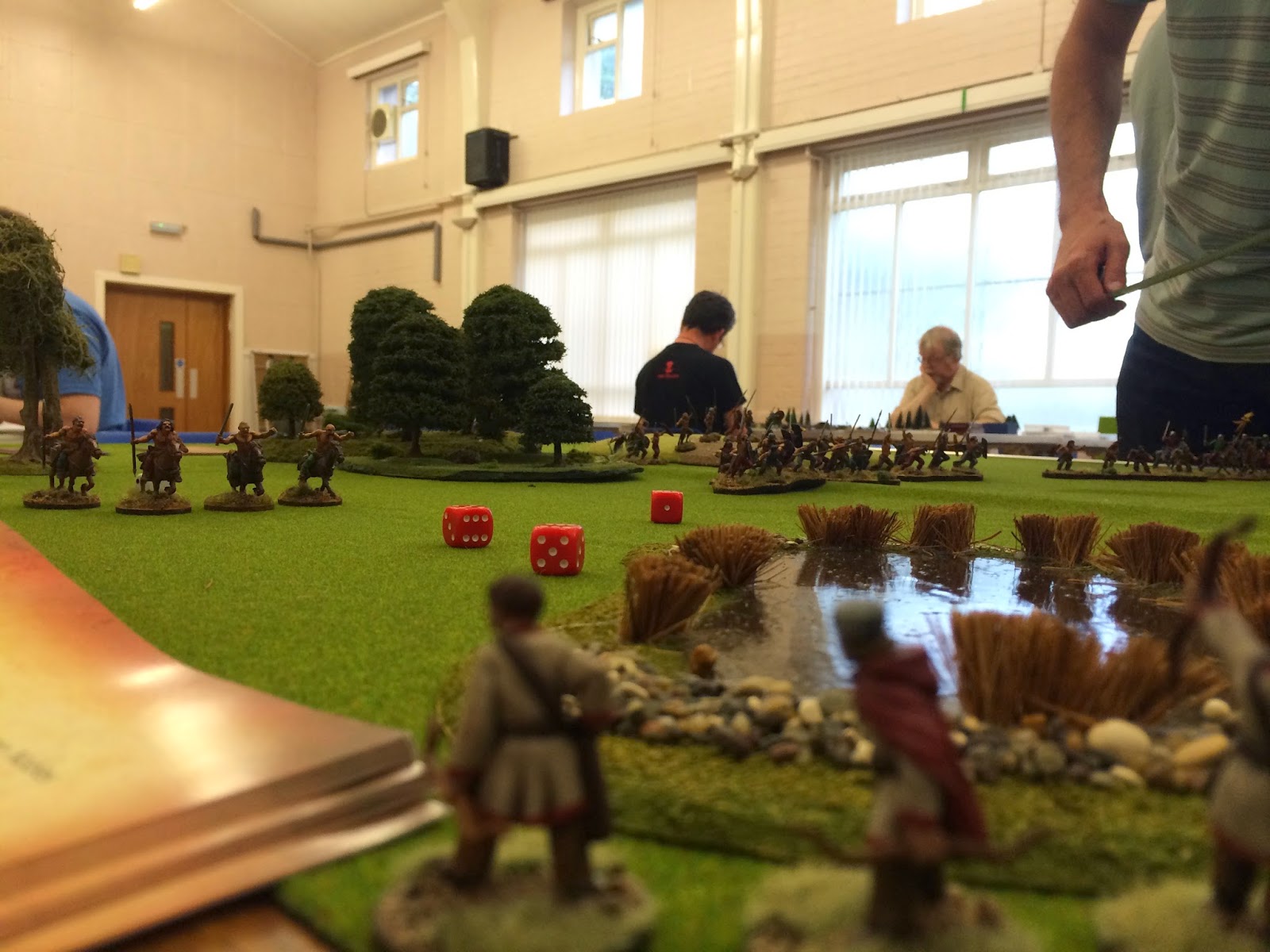 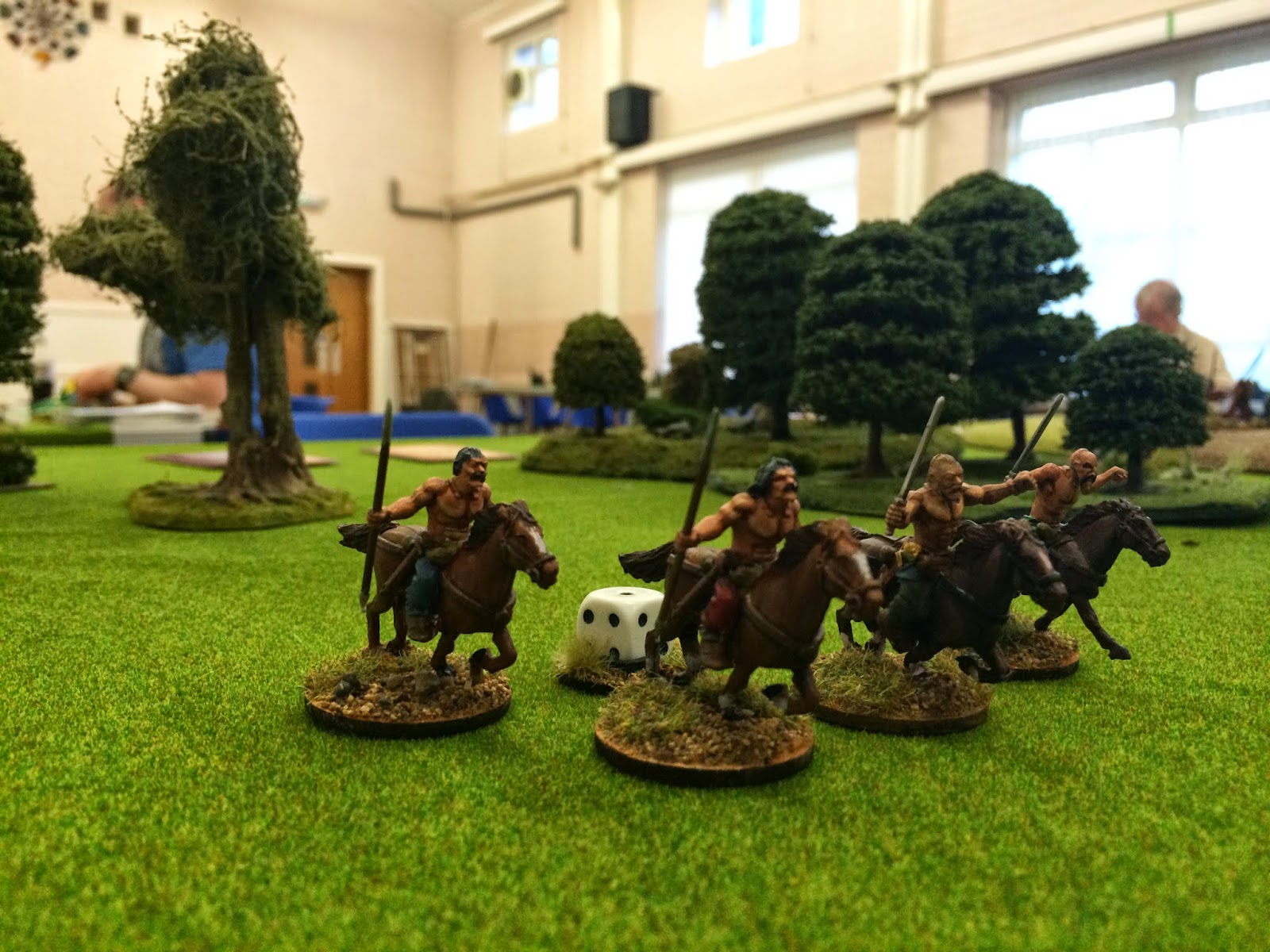 I deployed my elites to the front, followed by a large group of Levies.  My Shock Cavalry went wide and occupied a hill on my right.   My missile troops snuck out to the left and took up a reasonably safe firing position standing on the far side of a pond.


I managed to get a few pot shots on Ian skirmish cavalry reducing their effectiveness.  In the centre I found myself boxed in slightly, as Ian's force and rather than get caught on the hop while trying to deploy my forces out of the village I opted to make a line across the entrance to the village with my better troops, with the Levy standing nervously at the back hoping that they don't actually have to fight anyone.

This proved to be a mistake as when the Raiders attacked in the next turn when Ian attacked my front line of troops were thrown back due to shock, straight through the Levy behind them, inflicting a large amount of shock as well.  Ian's losses were minimal, with a small amount of shock and a few losses. 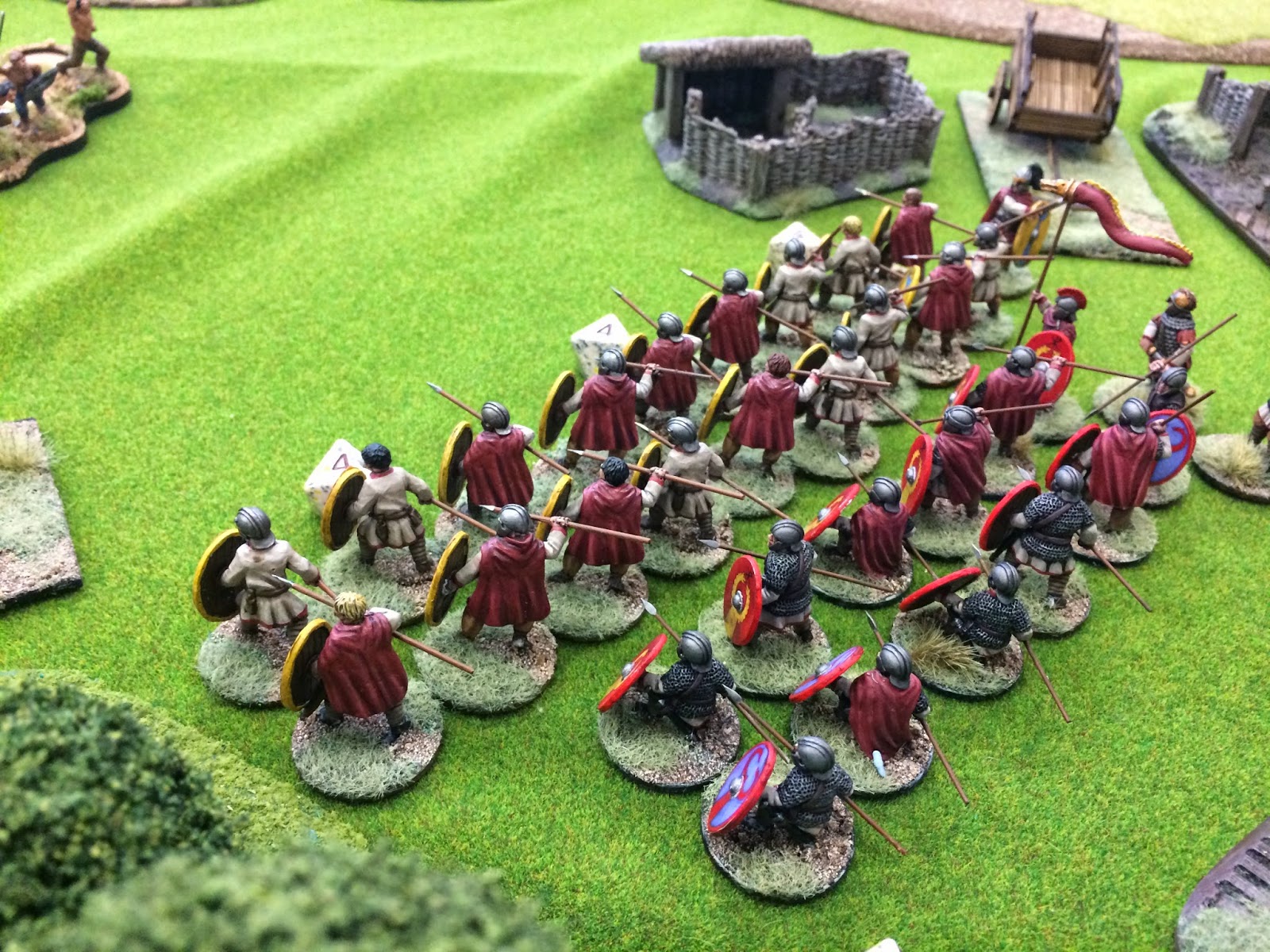 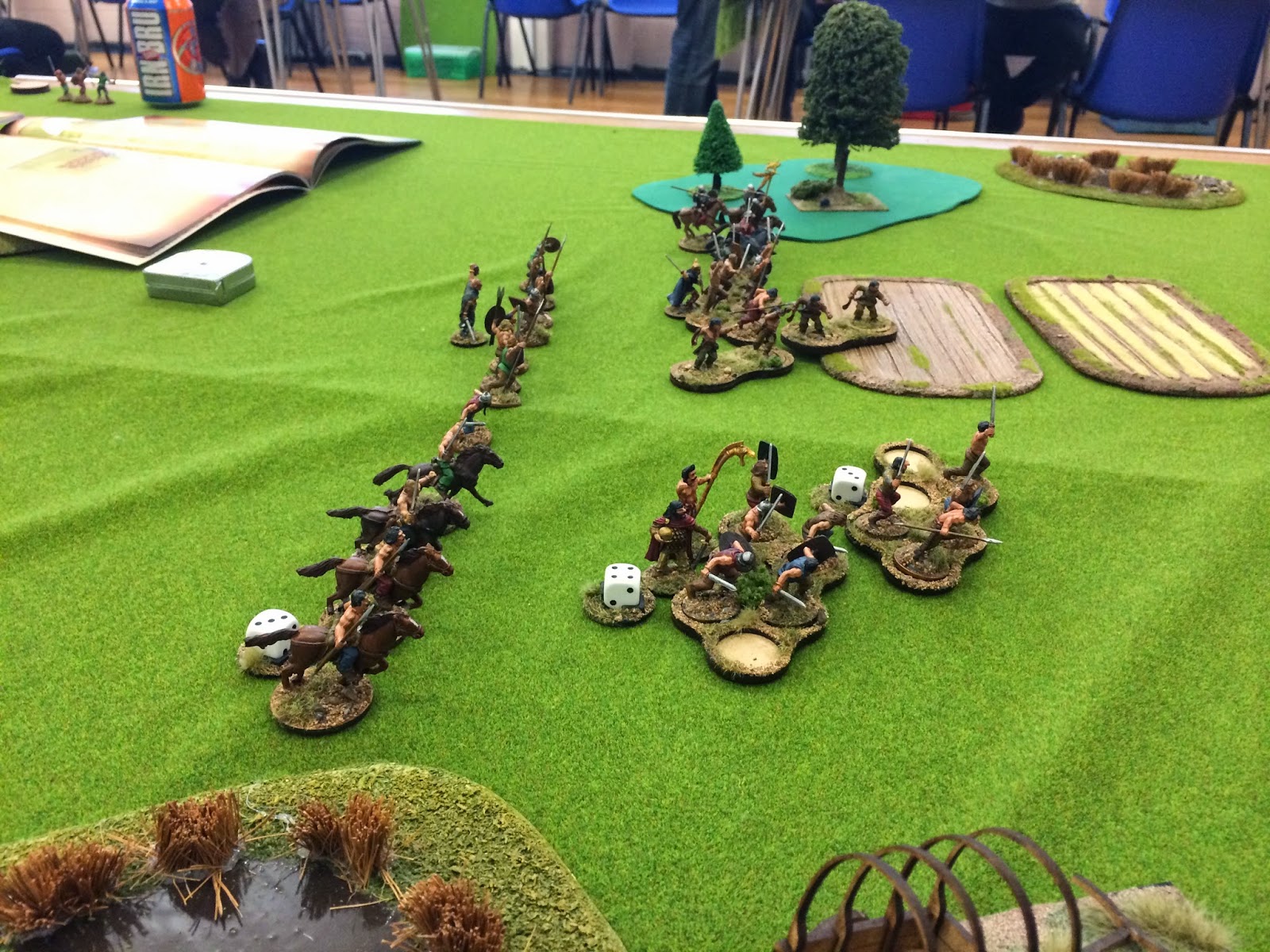 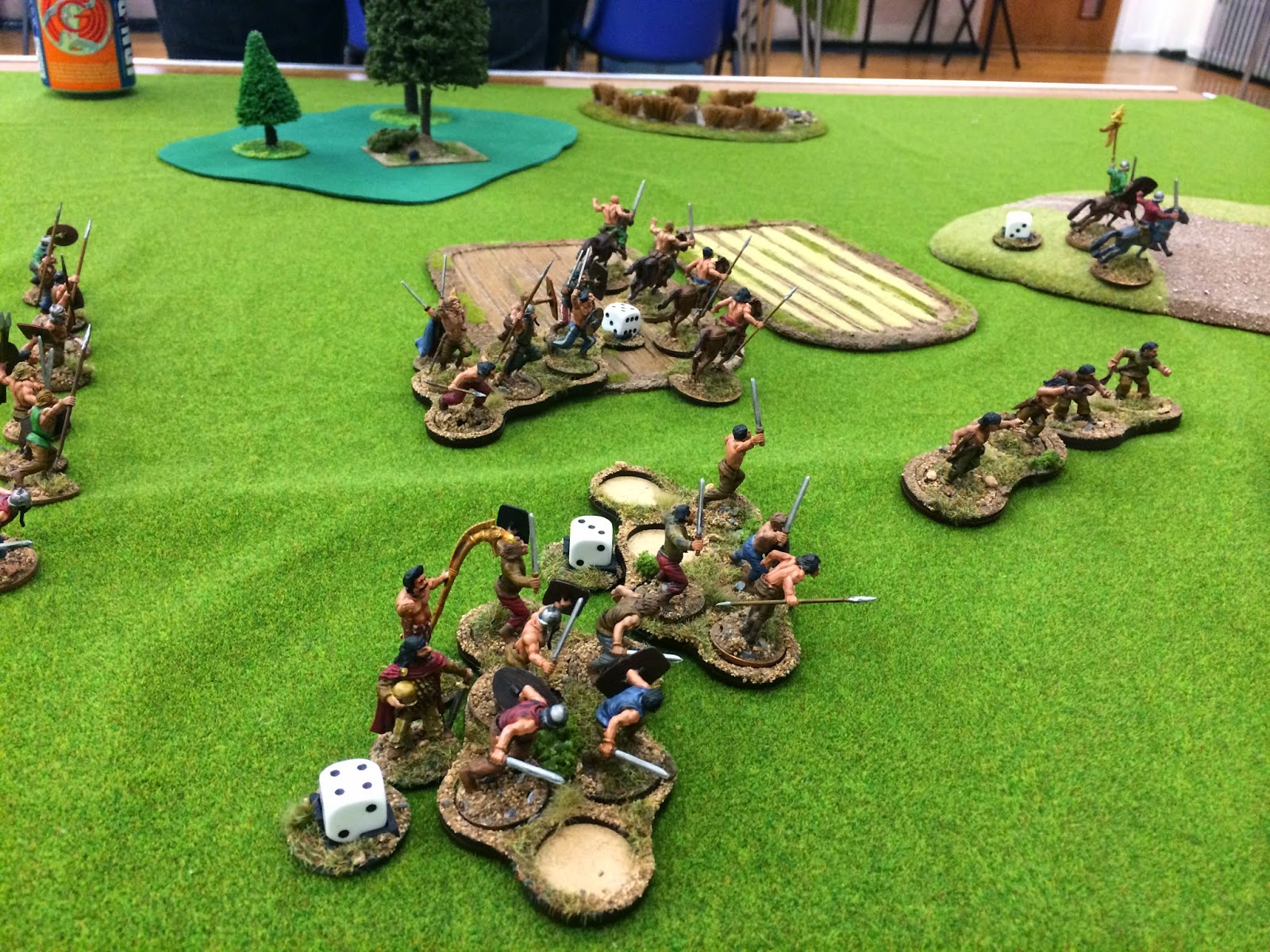 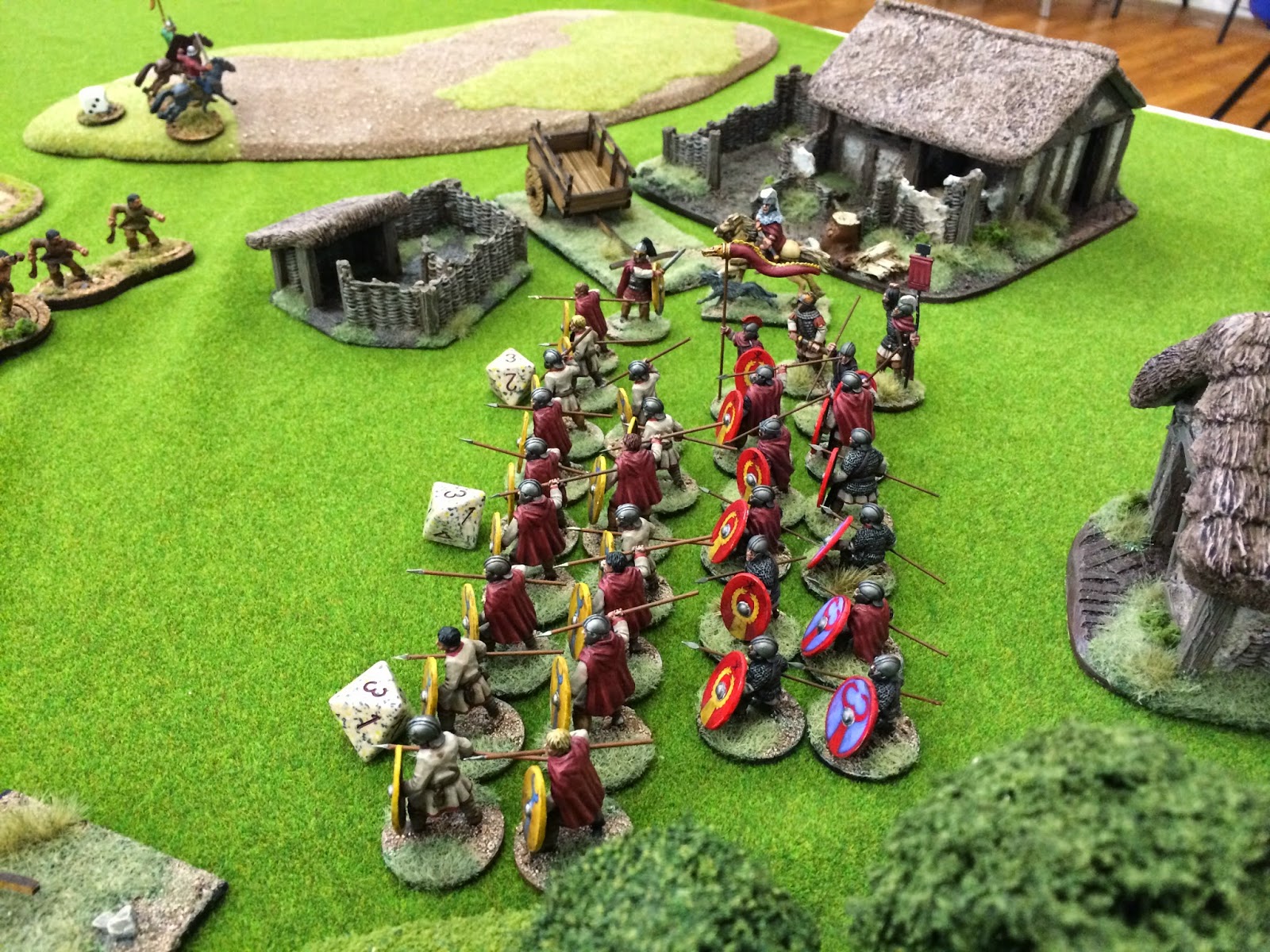 The next few turns did not go very well for the British. My shock cavalry were caught napping and destroyed be the Noble Raider cavalry, and my line of Levy got a severe once over by a couple of units of Raiders, getting pushed back through the elites behind subjecting them to yet more shock.
At least this put my elites to the front again!

There were a few turns of consolidation, where Ian reorganised his troops and I frantically removed shock.  The second time the raiders had a go was not quite so successful as i played a number of Fate Cards, increasing the number of dice I rolled by quite a lot.  He got a bloody nose on his second attempt, with one unit routing from the table, and another taking a severe beating. Unfortunately fro me while I was fighting to the front a unit of skirmishers had sneaked round the side, entered the first building ans found the loot. They quickly moved on to the second building and started searching.  IN addition to this Ian's remaining two Nobel cavalry had got into the back of my terrified Levy and basically seen of the lot of them!

We ran out of time at this point, but basically Ian was well on the way to winning, with my force down to a couple of units and in no position to give pursuit when he eventually found the second batch of loot. 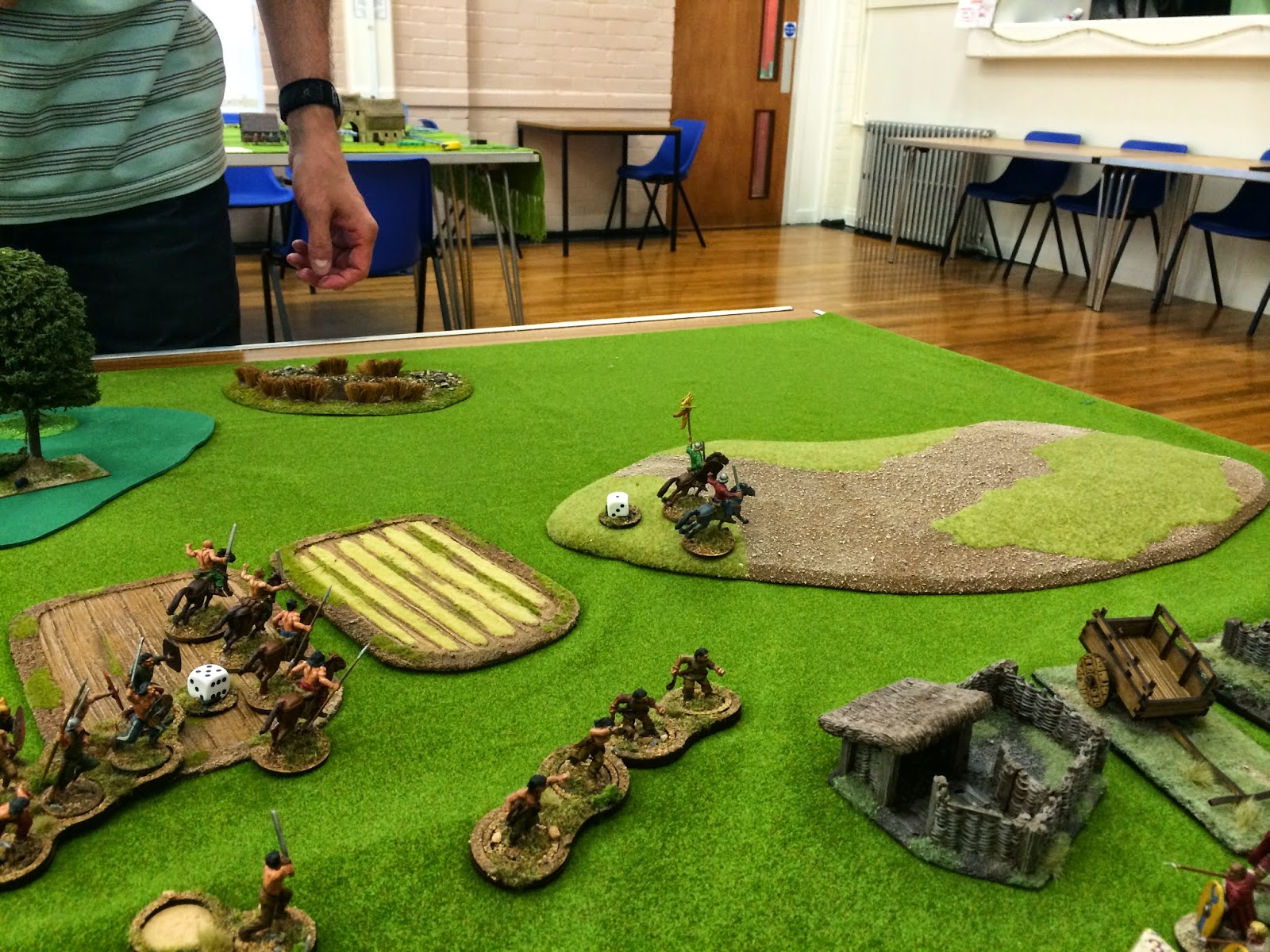 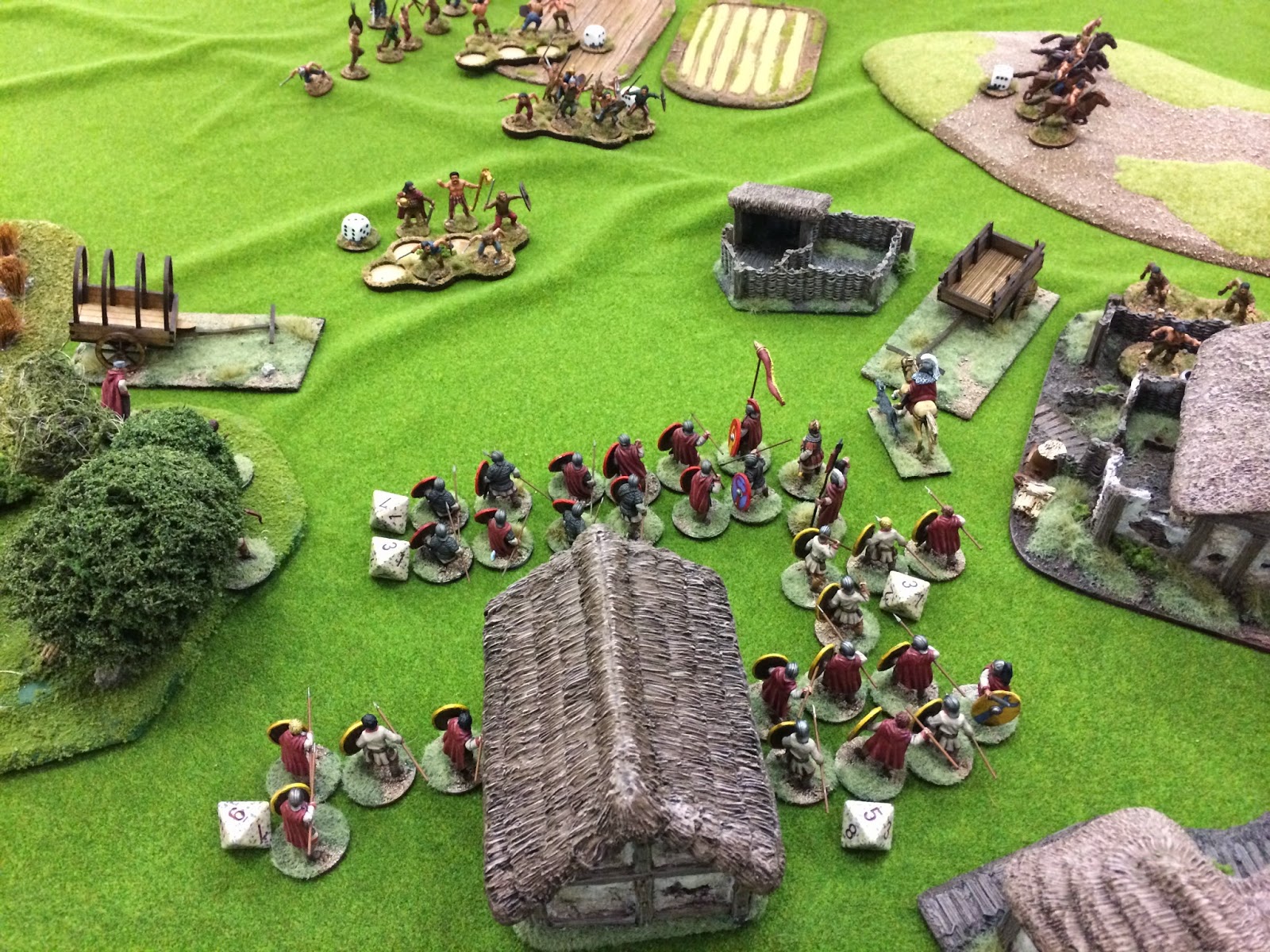 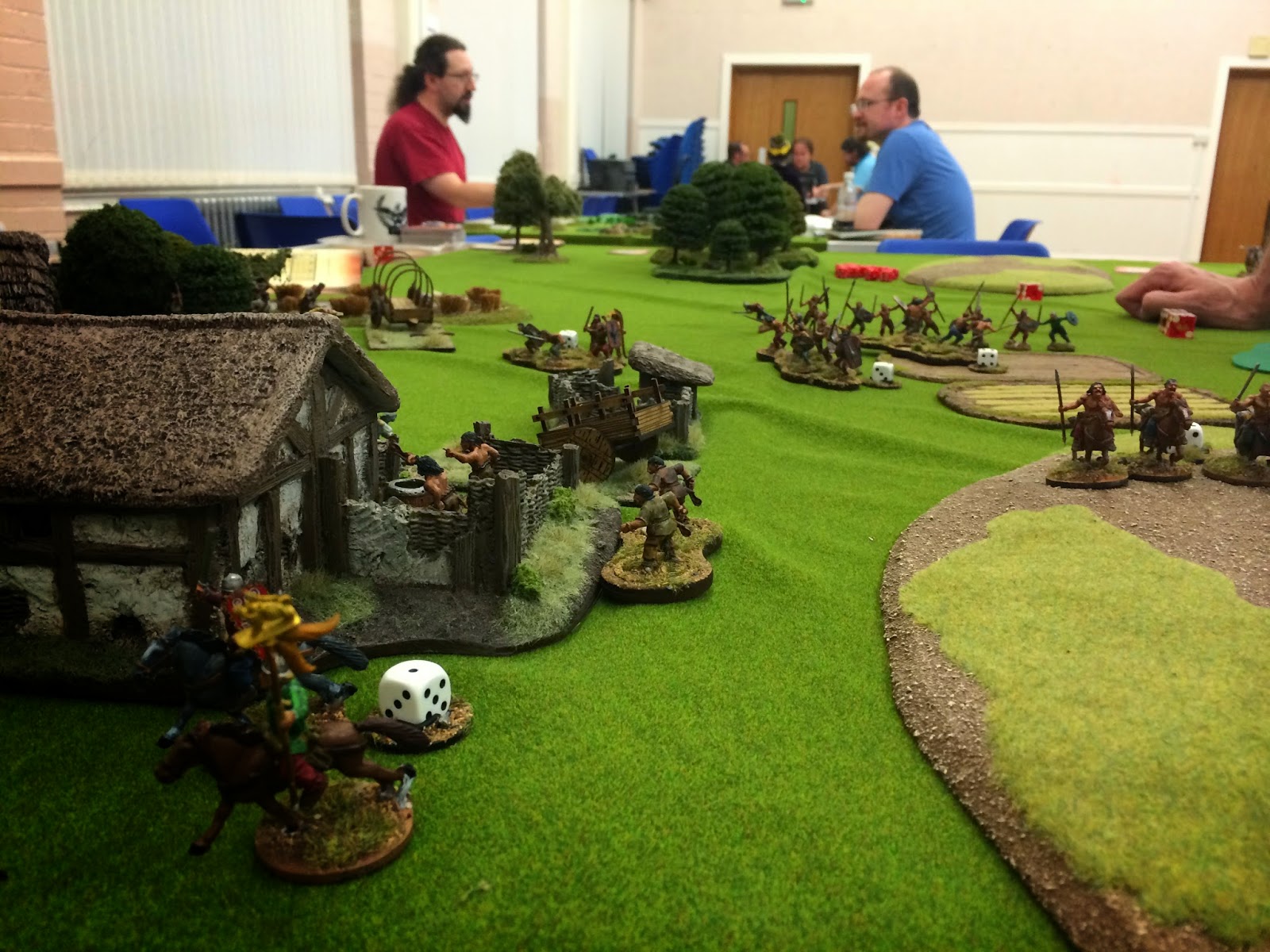 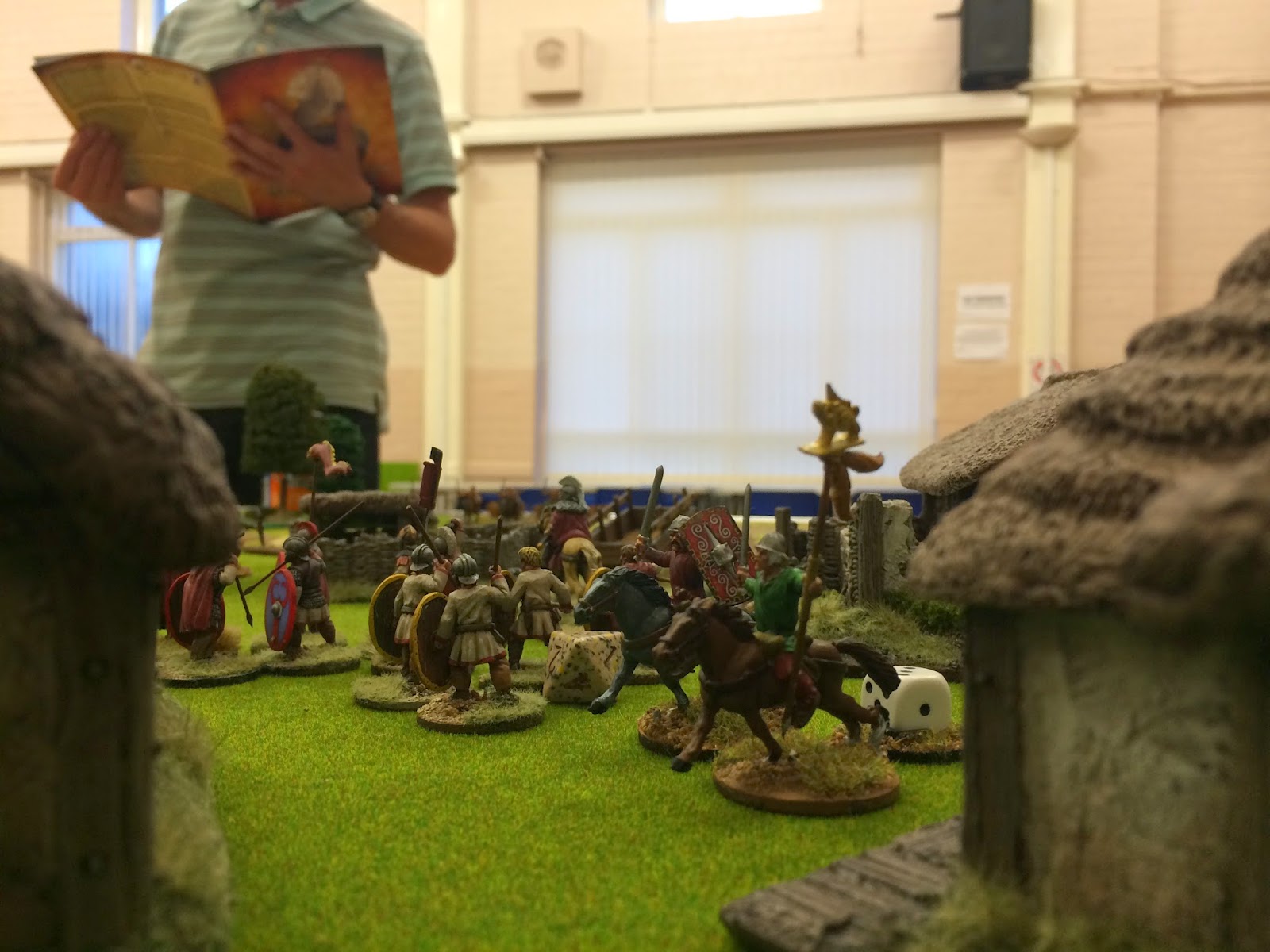 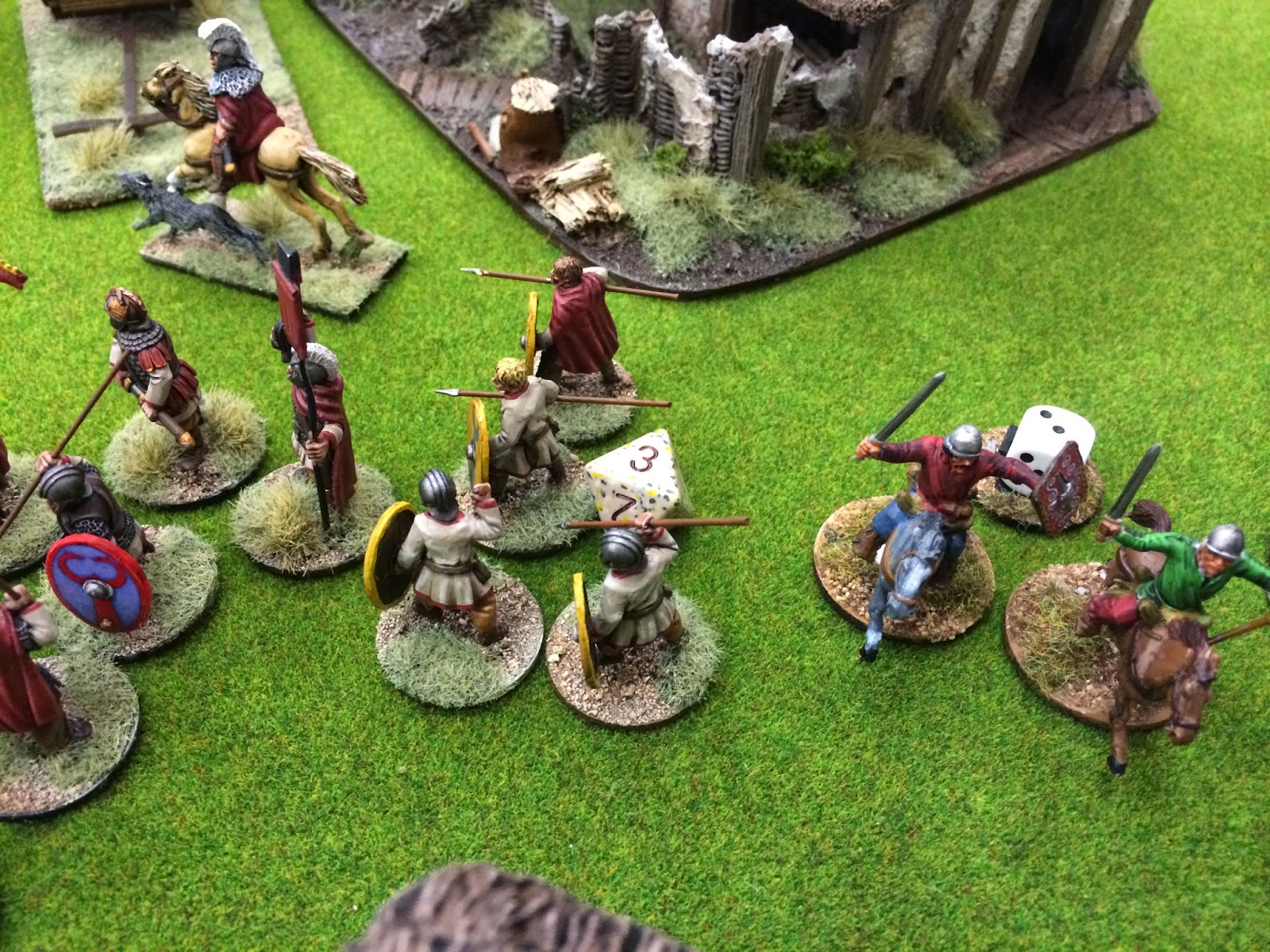 A great game and good fun. Just as well it wasn't a campaign game though as our casualties were high on both sides.

We went away and had a look through the rules and found a few things that were done wrong, especially around the cavalry and shock. Plus a few issues with command and control in the game itself.

Anotherthing that we decided was that we prefer drawing chits at random than mucking about with a shuffled deck of cards.  I have some chits made up but could not use them as did not have the right ones for the new forces and extended troop types. I will need to get some new sets made up for future games.

I'm sure we will get it right next time!