Stepping Through the Breach


I finally managed to get me recently completed Pandora Crew for Malifaux on the table.  I finished them a few weeks ago but have been playing other things, but finally had a free Monday to try them out.  I only have the basic No Shelter Here box so Alistair and I sat down and worked out a game based around that. In the end the full box plus a couple of upgrades came to 40 soulstones so we settled for that.

My force consisted of:

Alistair brought the Dreamer along with Teddy, a large number of Alps and Daydreams and Copelius.

For schemes and strategies I ended up with:
Flank Attack
Defend the territory
Reconnoitre

Alistair then realized that most of his crew were insignificant and peons, meaning that he only had three scoring units in his force.   The table was a collection of ruins, with lots of cover, not that it was really needed as there were very few shooting attacks in either force.

I deployed Pandora, the Poltergeist and a sorrow on my left, Baby Kade in the centre and Candy with one Sorrow on my right.  Alistair deployed most of his forces in the centre, with Copelius on my extreme right to do a scheme run into the corner for “The Ritual.” 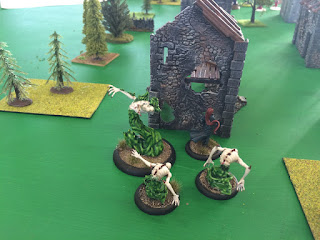 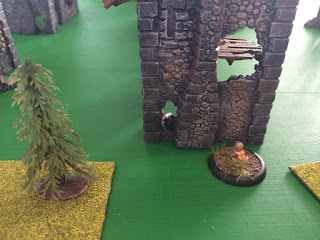 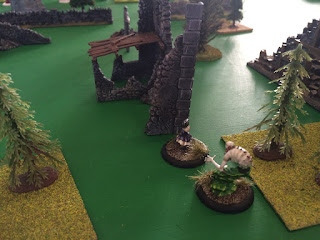 We were off to a slow start with lots of running about, with both sides heading towards the centre of the board.    Candy and Kade ended up in combat with the Teddy fairly quickly, and I nearly managed to polish it off in turn two but didn’t quite manage it.  In return Teddy ate Candy in turn three, but baby Kade managed to polish it off in return.

While this was going on Copelius had managed to get two scheme markers down in a couple of corners and I had managed to converge my sorrows on the bunched up Alps and Daydreams in the middle of the board.  I walked into the middle of the enemy crew and cast Inflict.  This managed to kill off most of the Dreamers smaller models, leaving Alistair with just the Dreamer himself and Copelius.  In return Alistair woke up the Dreamer and replaced him with “Lord Chompy Bits.”
I spend turn four seeing to my strategies and schemes, and spread out to score points for reconnoitre while getting in position for the schemes, in the expectation that the game would end on turn 5.  IN addition to this I used the box opens and lots of soul stones to paralyze Lord Chompy, meaning Alistair could only activate Copelius.
Turn 5 saw the Dreamer wake up but it was too late in the game for him to achieve anything. I continued to move into scoring positions and the game thankfully ended at turn 5. 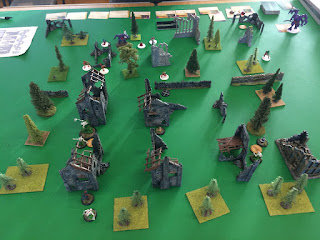 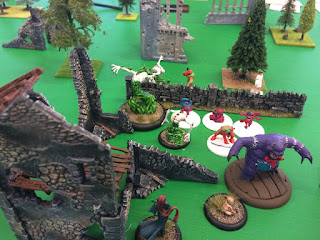 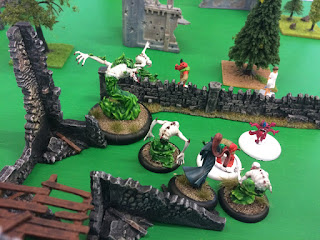 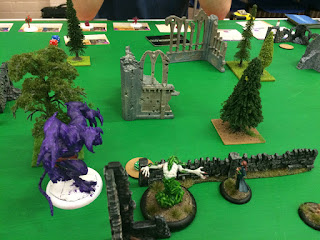 Not a bad start for Pandora, although Alistair was using a Master he had never used before and his crew was a bit lacking in non-peon models. As we were both using Neverborn masters there was a lot of Willpower debuffs floating about as well, which made for a lot of adding and subtracting all the various modifiers.

I was starting to get the hang of what each model can do by the end of it as well. Malifaux is a game of micromanagement and special rules, neither of which I am particularly adept at so I don’t expect to be any good at it really, but the models are nice and it is very different from what I normally play as well.  Also there are a few people in the club also getting into it so I should not be short of players.  I also managed pick up Lilith at Claymore on Saturday so that should give me a few more options.

Next week, Frostgrave!
Posted by Kevtheinx at 12:34