Epic Armageddon two weeks in a row. It’s like buses.

Fraser and I had a rematch, 3000 points again with no titans (apparently the Super Stompa doesn’t count as a titan).  I decided to use pretty much the same force as last week, but this time I dropped a few things in order to add some anti war machine ability in the shape of two Shadowswords.

My final selection this time was: 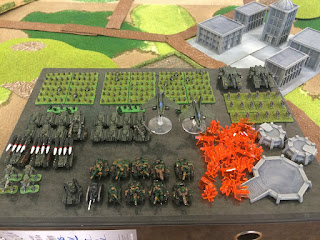 Frasers only changed from last week was the addition of a detachment of Stormboyz and an extra Mob of infantry, while losing a Blitz Brigade.  His force ended up looking like:

For deployment I deployed heavily on the left, with only a single Mechanised Company guarding my right flank. Fraser had a lot of units that could garrison and deployed as many as he could as far forward as he could.

I won initiative and decided that I needed to protect my left flank, which had a large amount of Ork infantry sitting on the centre line just waiting to attack.  The Manticores opened fire and managed to inflict some decent casualties and inflict a large amount of blast markers on the formation. This was probably the move that saved the game for the Imperial Guard, as it stalled the ork assault before it had even begun.    Fraser jumped my artillery with his aircraft, and we spent the rest of first turn advancing as far as we could up the board.  This time I was a lot more aggressive and my Tank Company started to inflict some serious damage on my opponent, while the Shadowswords reduced the Super Stompa to one damage point.

Turn two saw more of the same.  My tanks pushed up the centre, broke the central Ork mob ad pushed through to the objective.  On my left I brought my infantry company and HQ company to bear on the the Ork flank and drove them back from the centre of the table.  My right flank fared badly, with the mechanised infantry taking a beating from the Blitz Brigade and Speed Freaks, being driven back almost to my table edge. 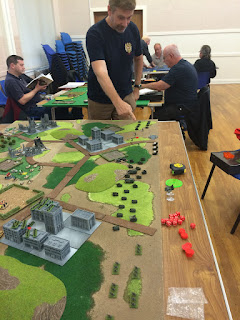 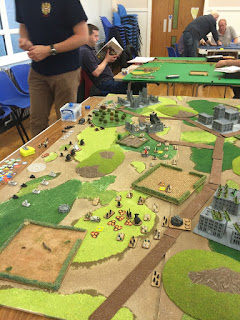 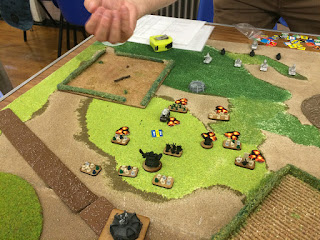 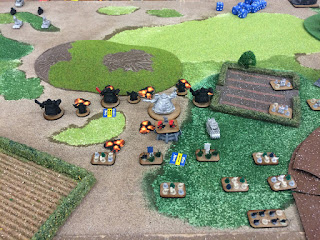 Turn three saw the right flank collapse, with the remains of the infantry being broken again and retreating, leaving a solitary Sentinel to guard my baseline objective.  In the centre the tank company advanced, capturing the central Ork objective and starting to make a mess of the Big Gunz hidden in some nearby ruins.  On my left the remaining Orks were wiped out, leaving the way open for the guard to advance and capture another objective.  While this was happening both Shadowswords sat on overwatch waiting to the Stompa Mob to come out from behind the hill they were hiding behind, but the decided not to and spent the turn hiding. 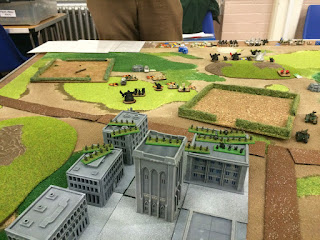 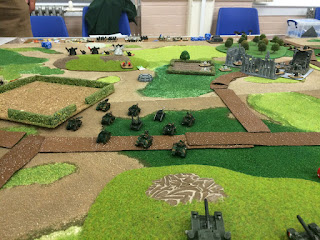 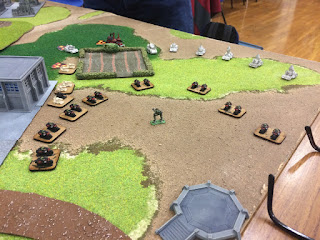 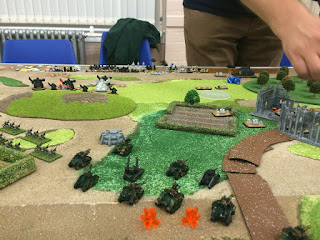 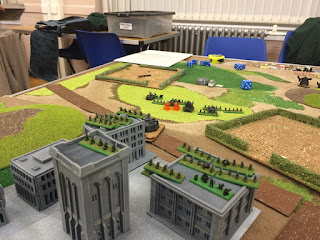 We stopped at the end of turn three as we ran out of time, and it was looking a bit ropy for the Orks. In a reversal of last week’s game while the guard had failed to achieve victory in turn three, turn four was looking like a sure thing.

Another great game of Epic against a great opponent, plus I actually remembered how to play the game properly this week.  The main problem with playing any game so infrequently is that while you may remember the core of the rules you quite often forget how to play the game properly.  Last week I forgot completely but got back into the swing of for this week.  Hopefully I will manage to get another game in soon before I completely forget again.

Also once again there were a few people coming up to the table and showing an interest, stating that “I’ve got loads of epic lying about at home”.  Hopefully worth some encouragement they can be persuaded to dust them off and give the rules a try, as they really are excellent.  If not then maybe they will sell me their stuff instead!

Next week sees my Malifaux warband get their first outing. I am preparing myself for an evening of scratching my head and trying to remember what things actually do.
Posted by Kevtheinx at 12:41