We gave Frostgrave a try tonight.  No campaign, just a game to try out the rules to see how they play.   We had four players, so opted for a 4x4 board, covered with as many buildings as we could muster.

The wizards were from the following schools:
John brought a Necromancer
Rory brought an Enchanter
Douglas brought a Soothsayer
I opted for a Sigilist.

We played a basic treasure grab, with each player putting 3 tokens down on the board, so there was lots of treasure to grab. 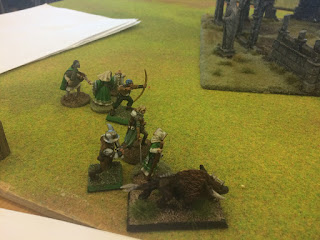 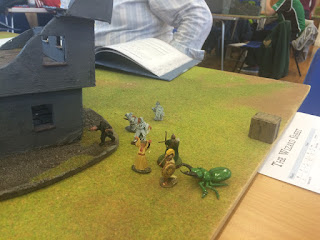 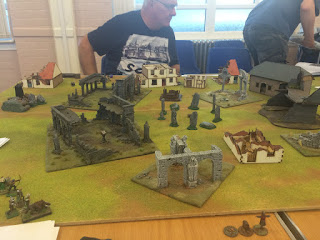 Early game saw everyone running for the easy tokens, and a few potshots from archers and ranged spells.  I tried to cast a few spells to enhance my warband but was not very successful, mostly failing to cast them. In Frostgrave if you fail to cast a spell you can also take damage, with how much depending on how badly you fumble the spell. There were a few people who started doing some serious self-harm from bad spellcasting.

The Necromancer and Enchanter got stuck in fairly quickly, with the Enchanter throwing some grenades at John’s band, and John throwing some nasty spells back in his direction.  Douglas and I were on the other side of the table and had a slightly more cautious approach, trying to get as much treasure as possible without exposing our bands to any unnecessary conflict.
John eventually managed to kill Rory’s wizard with a Bone Dart, while suffering some casualties in return.  Douglas and I started to come to blows, with Douglas generally getting the better of me, thanks to some lousy die rolls. I had sent my Wizard into the standing stones in the middle of the table, as there was a treasure token there. As soon as she picked up she cast a teleport, moving to my table edge, ready to exit the board as soon as the rest of my band could get there.  Douglas in the meantime has taken control of my ranger, who was fighting my knight, while his warhound killed my warhound and there did not seem to be much I could do about it. Even my archer firing from his advantageous position kept missing his mark.
On the other side of the table Rory had managed to get away with a few tokens but paid a heavy price with most of his warband down.  John did quite well, taking out a large number of Rory’s band and making of with some treasure. 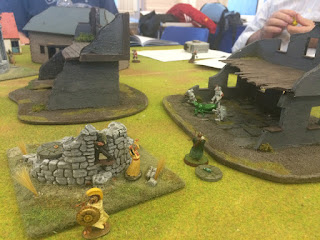 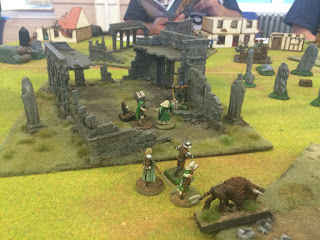 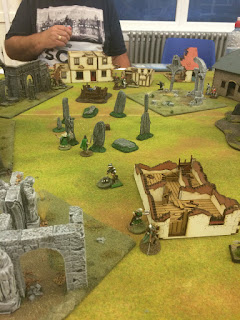 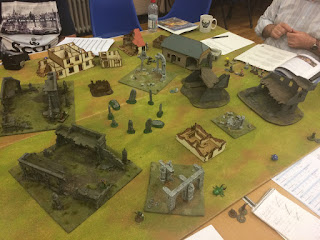 Douglas was clear winner, taking out several members of my group, while getting a good haul of treasure and managing to stay largely intact thanks to my inability to roll above 10 on a D20.  I managed to get three treasure tokens, but lost my apprentice, ranger and warhound in the process.

Our first outing at Frostgrave went fairly smoothly, with everyone getting the hang of the rules quite quickly.  There is a lot of potential in the game, but a few points were raised as a result of last night’s game:

The terrain needs to be a bit more densely placed. We played with a fairly open table and everyone could pretty much see across the boards, which gave some wizard and absolute filed day (the ones with direct damage spells)

Direct damage spells are the most effective.  While the selection of spells are great, some of them are very situational, whereas a direct damage spell is always useful and will have an instant effect on the game.  This may change as people get a bit more practice and become smarter but at the moment, Elementalist for the win!

This is a game that is heavily biased towards narrative play.   Get together, come up with an interesting background for your band and play an interesting campaign with an end goal. I think just using the campaign rules and scenarios for an open ended campaign would end up unbalance pretty quickly (as would happen in pretty much any campaign).
Posted by Kevtheinx at 12:38

Email ThisBlogThis!Share to TwitterShare to FacebookShare to Pinterest
Labels: Frostgrave