A rare opportunity to play Epic came up recently and I jumped at the chance.  The group that Fraser usually plays with abroad have started playing it and he had a pile of orks lying in a cupboard from 25 years ago so he dusted them off for a game.  He decided to use me as a trial and I happily agreed.

We opted for 3000 points, using the standard Net Epic Armageddon tournament rules. The only limitation we agreed were no titans.  I took my fairly standard Imperial Guard force: 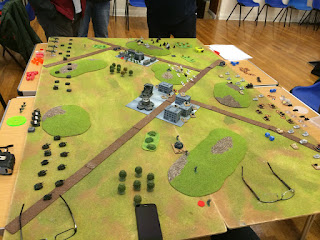 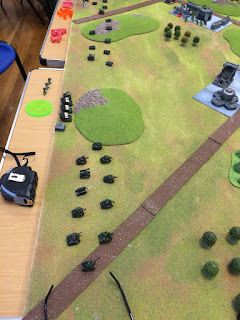 I had a fairly balanced approach to my army, while Frazer had basically opted for a mechanised force, with only one formation actually containing any infantry.  I wish I had brought those Shadowswords now.
Deployment resulted in the Orks fairly evenly, while my Guard were mainly deployed on my left, with the lonely and slightly nervous Tank Company holding the right flank.

Fraser won initiative and basically threw his entire army down the throat of my shocked imperial Guard, who barely got of their baseline the whole game.   The Guard had some early successes, with the Tank Company seeing of one of the Blitz Brigades, but casualties were starting to tell and the second Blitz Brigade, with supporting fire from the Big Gunz brigade finally saw off my tanks.

On the left I managed to cripple one of the blitz brigades, but my infantry were no match for the might of the Stompa Mob, who waddled over the hill and blew the HQ Company into little bits, with very little I could do in return.  I had no real answer to the Super Stompa, with even a full 8 rocket salvo from my Vultures having no effect on the Stompa Mob.  At the end of turn 3 we had a look at victory conditions, and I was actually in the lead 1-0, but my force was pretty much gutted and another turn would have seen the Orks secure victory, and as it was getting late we decided to call it there. 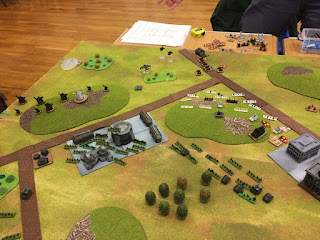 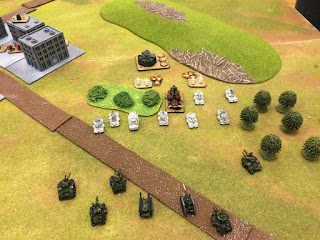 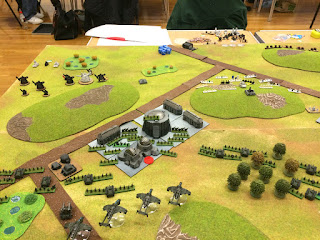 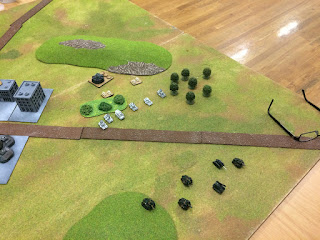 Epic is always great fun, and there is always and big stream of people coming to the table asking about it, and then saying that they have some Epic stuff at home and fancied a game. I am optimistic of upping my game count from 2 a year to something a bit higher in the near future.  I have some epic for other forces floating about and would really like to get a force of Tyranids as I think they would be really good in this scale, but I have neither the conversion skill or the money to acquire an epic tyranid force so it will need to remains on teh wishlist for now.

As far as this game went I badly underestimated the amount of armour that Fraser would bring, as every game I have played against orks they have been quite infantry heavy.  There was a big lack of decent anti-tank in my force, and no way of killing his baby titan, so in the end it all went a bit wrong.

Rematch next week so I am hoping for a better result!
Posted by Kevtheinx at 12:34