We finally managed to continue with our small Chain of Command campaign, "48 Hours in May."

The German assault on Bacthaun by Marco's platoon had been seen off in short order, and my platoon, flushed with success from their victory over Barry at the other end of the village.

Once again the Germans would be forced to advance over open ground to try and dislodge the French from a defended position. 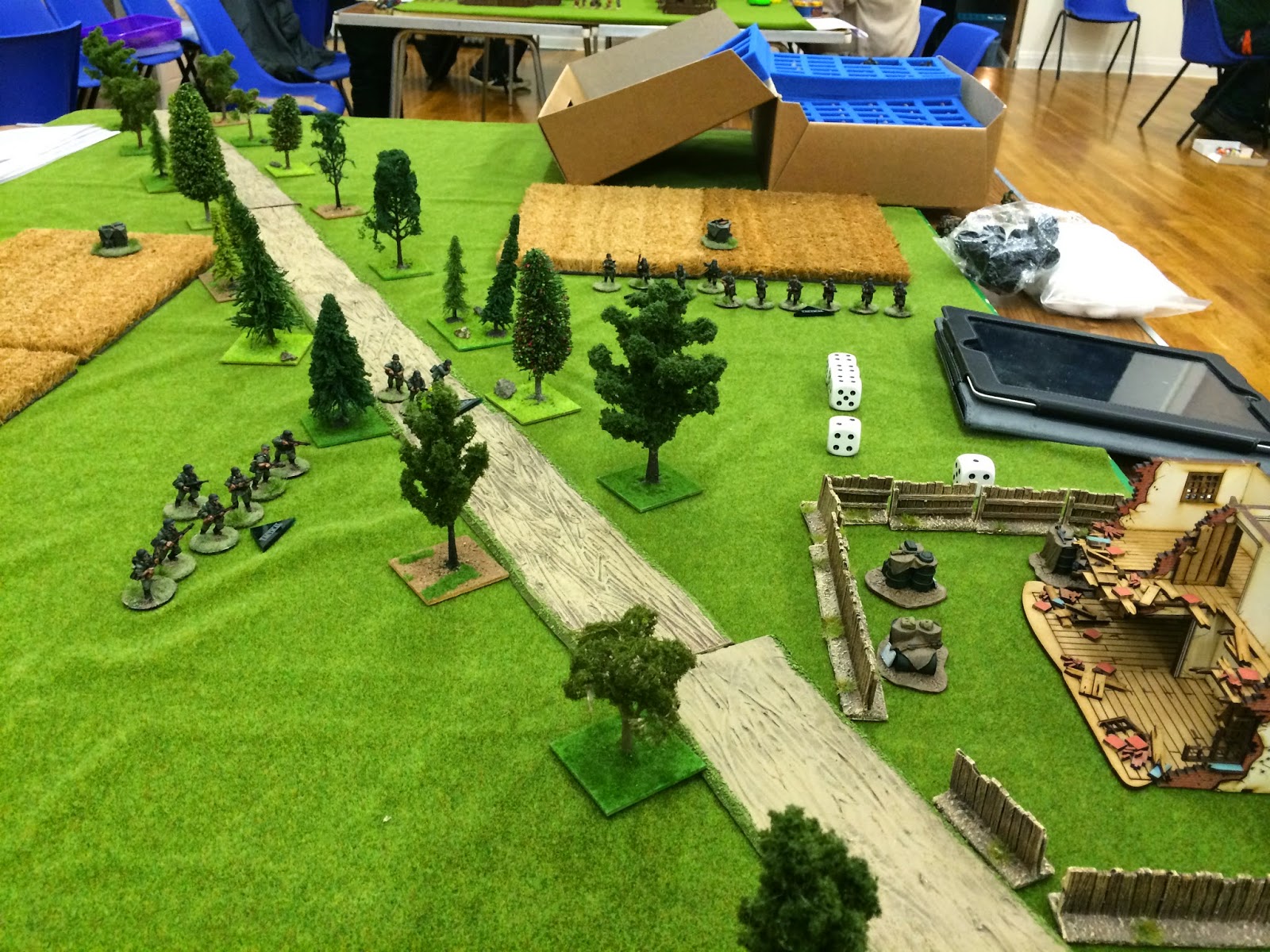 I rolled a ten for my support which gave me some nice options. The temptation was to just take a spotter for an off-table mortar barrage, as the French were probably just going to do their best to make a defensive position round the single building on the board.  I decided that would be a bit dull and took a few things that I had never tried before.  In the end I took a Flamethrower team, Off table artillery barrage and a Heavy Machine Gun team in a defensive position.

Allan opted to take an off table mortar, a heavy machine gun and an anti tank rifle.

The patrol phase was fairly predictable, with the French ending up with all of their jump off points within the grounds of the fenced off building, with the Germans all being placed in the the corn fields that surrounded then French position.   The objective of this game was simple, break your opponents force morale. I got lucky and ended up with a Force Morale of nine, while Allan's was eight.

Early game saw me deploy two squads onto the table and my Heavy Machine Gun team. Is started a cautious advance with my squads while my Heavy Machine Gun waited to open fire on any French that deployed.   Allan had some terrible luck and failed most of his deployment rolls, as the French were obviously having a hard time restoring order after the initial artillery barrage.  When he did finally manage to deploy a machine gun section I promptly shot most of them with the rest fleeing the table. First blood to the Germans.

Unfortunately just as I was advancing out of the corn fields the turn ended, leaving Allan to deploy unopposed, which he started to do.  My advancing Germans started to take a lot of fire, but thankfully casualties were light mainly as a result of opting to take advantage of any cover.   In the meantime my Heavy Machine Gun, under the personal command of the Platoon Officer was making a real mess of the French that were using what little cover they could and the French casualties were starting to mount.

Mid game saw one of my Junior Officers killed and then the French managed to call in their off table mortar support, pinning one of my advancing squads and doing a fair amount of damage as well. I tried to ignore it and kept up my storm of machine gun fire into the french position, killing a lot more men while also wounding the French Officer, and killing the mortar spotter as well.

After the mortar was neutralised I brought on another squad on my left flank and the Flamethrower team.  My left flank started to advance again after stalling badly earlier in the game.  My second squad started to provide suppressive fire at the French position, allowing my rifle teams and Flame thrower teams to resume their advance over open ground.   In the end though they were not needed as in a flurry of bad luck Allan and a few more commanders shot and another section wiped out, which reduced his force morale to 0, leaving the Germans victorious.

Another good game slightly hampered by the fact that neither of us had looked at the rules in a month or so, and I could not find my copy of the rulebook as it is in a box ready for moving day.  The field was very open and there was not much in the way of fancy tactics going on.  This game was more about firepower than anything else, and the Germans definitely have the advantage there.

In terms of the campaign this means that the Germans have managed to successfully complete all their first day objectives, albeit slightly later than originally planned.  My Platoon is pretty much intact at this point, with only one Junior Leader lost. Marco's platoon has taken a bit of a mauling and Pete's platoon has yet to see action.   The French are in a similar state.  Allan's platoon took a lot of casualties in last night game. Barry's French took s few casualties in our last encounter, but lost a lot of leaders, including the Platoon Commander. Ian's French are still relatively unscathed.

I mentioned earlier on in the blog that I was moving house in a few weeks.  We are now well into the packing and anything not essential for day to day running of the house is getting packed up in preparation. Unfortunately this means most of my gaming stuff, with all of my rulebooks being the first casualty.  It has meant that the loft has had a good clear out, and I took this quick snapshot of all of my boxes of toy soldiers: 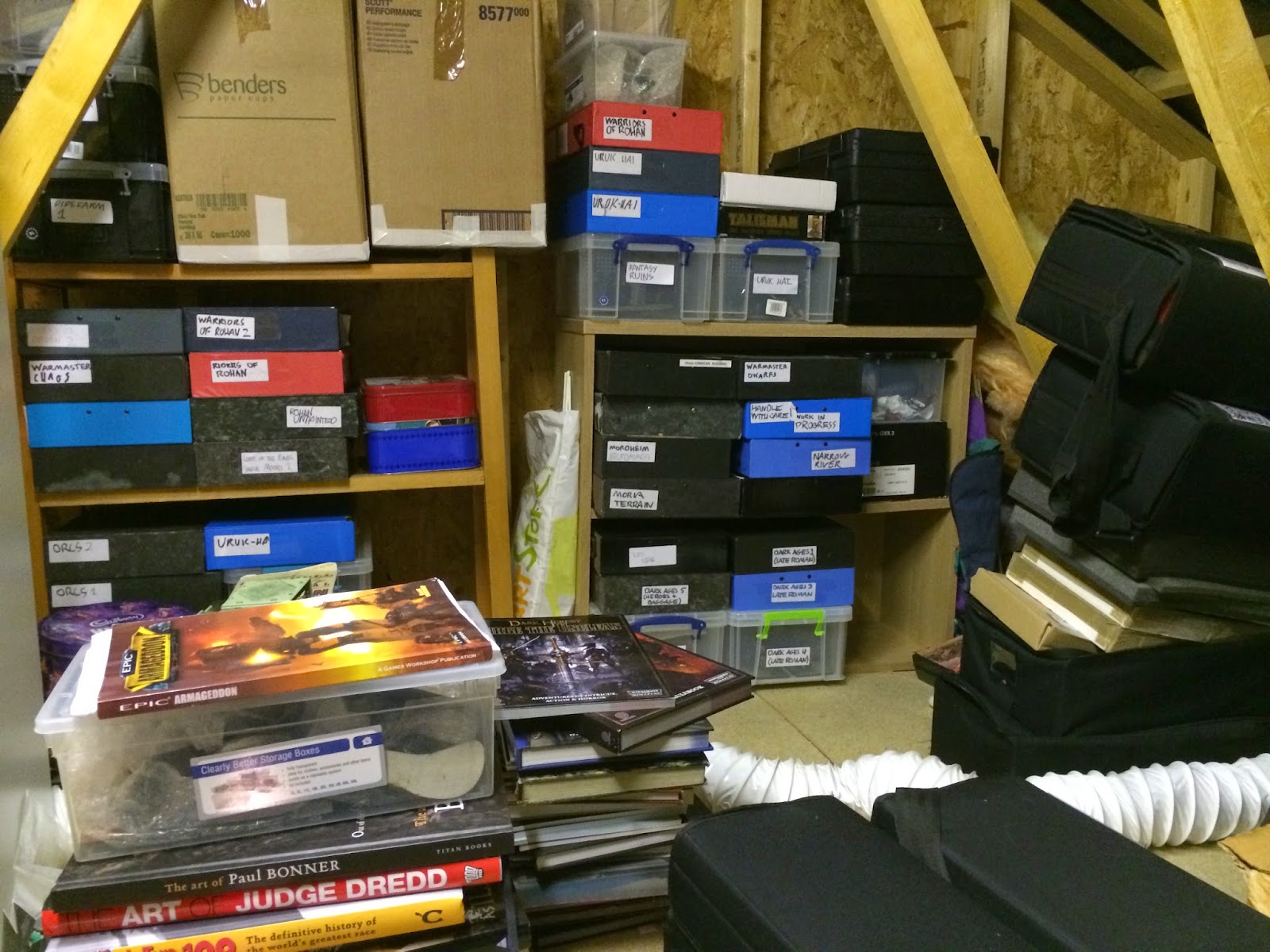 Small fry by a lot of wargamers standards but looks like a lot to me!  Not to much of it unpainted though which is nice.  Mainly lots more Lord of the Rings miniatures, Oldhammer stuff for 3rd edition WHFB and Rogue Trader Orks. They are projects for another year.

No games or updates for a few weeks in all likelyhood as I am going to be a bit busy in the coming weeks.
Posted by Kevtheinx at 14:27