This Monday we kicked of our WW2 Chain of Command campaign, "48 Hours in May."

John has kindly agreed to referee a short campaign with six players. There are three a side and it is set in France in 1940.

Marco, Pete and myself opted to play the Germans, while Barry, Ian and Allan were the French.

We were going to play a ladder campaign, with a possible three points of Assault. After some discussion we decided to attack at two points, keeping a third platoon in reserve just in case of heavy casualties.

I was given the task of assaulting the small village of La Quesnoye, which was on the German right, next to the main target of La Mahon.  Ian would be commanding the French defenders, and as such was allowed to use the terrain maps provided to set up the board. 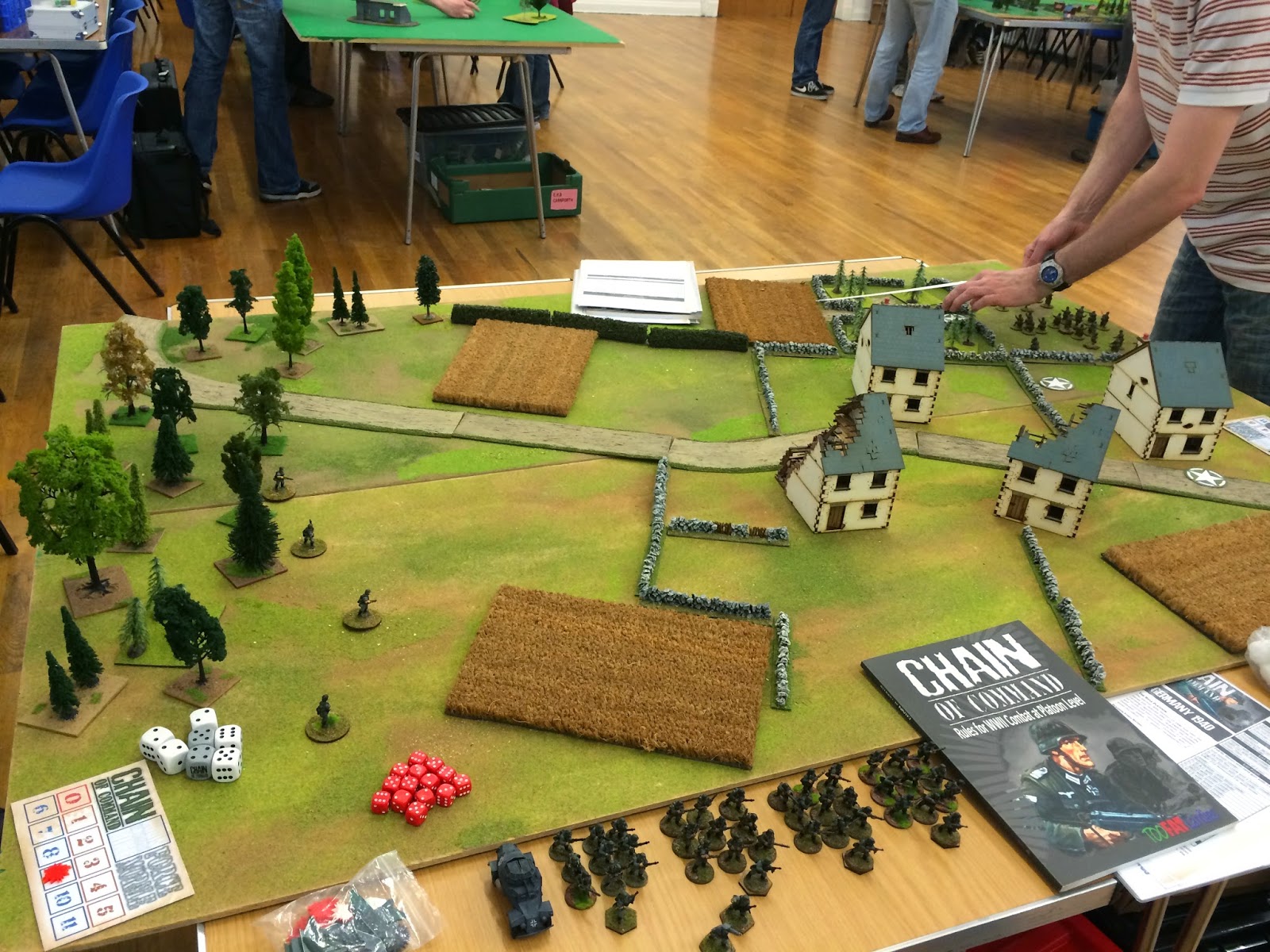 The scenario was number 2 from the Chain Reaction rulebook, "The Probe".  The German objective was to get a single section or team into contact with the French table edge, while all the French had to do was stop them. A difficult one for the Germans to win, especially given the time constraints of a Monday night.

I rolled a five for support, which by the time you factored in the bonus the French allowed to even up the forces allowed Ian to choose the almost obligatory Off table mortar and spotter, and a few minefields. The scenario also allowed for him to have a couple of emplacements. I opted for an adjutant, as I wanted to get all my commanders on to the board and not have to worry about whether or not the rest of my troops would deploy without a senior officer behind the lines egging things on.  For the other four points of support I opted for an armoured car.  It was very lightly armoured but had a decent main gun, plus I warned my opponent before hand that I was going to bring one.

The patrol phase kicked off and I managed to get two jump points on the outskirts of the small village on my right flank, while I ended up with one on the left, back in the wood lining my edge of the board.

Early game I deployed a squad of Germans on my right flank and started to try and get into the town. Ian deployed very quickly and in two phases had virtually his whole force deployed, heavily weighted towards the German right flank. After he had deployed Ian pretty much went to ground as his entire force was deployed in hard cover.  I quickly brought on my 5cm mortar and my armoured car and tried to push up the board.

There was some exchange of fire, with my single deployed squad starting to come off second best against the weight of French fire against it. I managed to get a second squad deployed nd advanced into one of the central buildings, which put some pressure on the French, basically cutting their forces in two.  I managed to bring the armoured car up the centre and between that and the central squad they inflicted heavy casualties on the French squad that was guarding their right flank, pretty much leaving it wide open.   At this point Ian had finished thumbing through the book tried to find a solution to the armoured car but the best he could managed was to drive it off, so he decided to withdraw before his casualties were too great, leaving the Germans in control of the field. First combat of the campaign and victory to the Germans.


A fairly bloodless game, with only three Germans felled during the game, and 4 French.


We are both complete novices at Chain of Command and it showed. We both spent a lot of time looking through the book to check rules and make sure we were doing thing correctly. This was my 5th game of Chain of Command, while it was only Ian's third.

Ian never managed to get a mortar barrage off during the game as he just could not get his spotter into the right position, which was telling.  He also did not bring my anti-tank ability so was on the back foot right from the start.  I also was a bit nervous about the mortar barrage and the effect they could have on the game, so I opted not to take one and see what sort of things could be achieved without relying on it.

The first game I played of Chain of Command John talked about the "four f's."   Find, Fix, Flank and Finish.  It is easy to dismiss this kind of thing while getting buried in the game and all its rules, but I am beginning to realise that it is in fact the key to success.  If you hunker down and not move you will be outmanoeuvred and eventually you will lose. You cannot rely on just your firepower to do the job.

I also think that having a good range of support options is essential to get the most out of the game. The threat or coming up against some kind of armoured vehicle, even just a small armoured car is enough to make your opponent think carefully about what he takes as support. While I am not advocating taking a Tiger2 at every opportunity it is still a good thing to have the threat.

The fact that this was a campaign also altered the dynamic a lot. Under normal circumstances I am sure Ian would have fought on a lot longer and tried to hold my Germans off until the end of the evening, regardless of casualties, but as he was going to have to use the same force again in the follow to this he decided to give ground and preserve his forces. A pretty good decision in the end.

I really need to get a move on and get my Germans finished, so that I can stop pestering John to borrow his toys. I onyl have ten to do and then I will have the basic Platoon painted. Then I jst need to select what support options I would like to have access to.

So the Germans are off to a good start, and it is up to Marco to repeat the success next week on the road to Fort Mahon.  I am away on Holiday next week so will need to wait until I get back to find out the results.

Email ThisBlogThis!Share to TwitterShare to FacebookShare to Pinterest
Labels: Chain of Command, Too Fat Lardys, WW2