So another game of Impetus, again at 500 points with three commands.


I brought the same army as last week, consisting of three commands. One of a mixed bag of cavalry, one of heavy infantry with archer support and one of Impetuous infantry and cavalry.  This time I was playing Fraser, and he brought his Yuan Chinese.  I do not own a copy of Extra Impetus 5 and know nothing about the Eastern armies as I have very little interest in them  Consequently I had very little idea of what they were capable of.

We used an eight foot table and set up a few hills, along with some woods and a field on my left flank.  This basically made 2 foot of the table length unavailable.

I deployed my Heavy Infantry to the left, with the Impetuous Allies in the centre, and my cavalry wing on the right flank, although there was barely enough room to get the on the table.

On the opposite side of the table, Fraser deployed an array of heavy infantry in large units against my left, another set of large infantry units and some artillery in the centre, occupying a hill, and some cavalry against my right.  The infantry face of looked like a fairly even match, but I had the advantage in numbers on the right flank, so I hoped that my cavalry could quickly overwhelm Fraser's flank while my heavy infantry advanced across the table. Making my cavalry a crucial part of my plan was the first mistake of the evening as they tend to under perform on a regular basis. 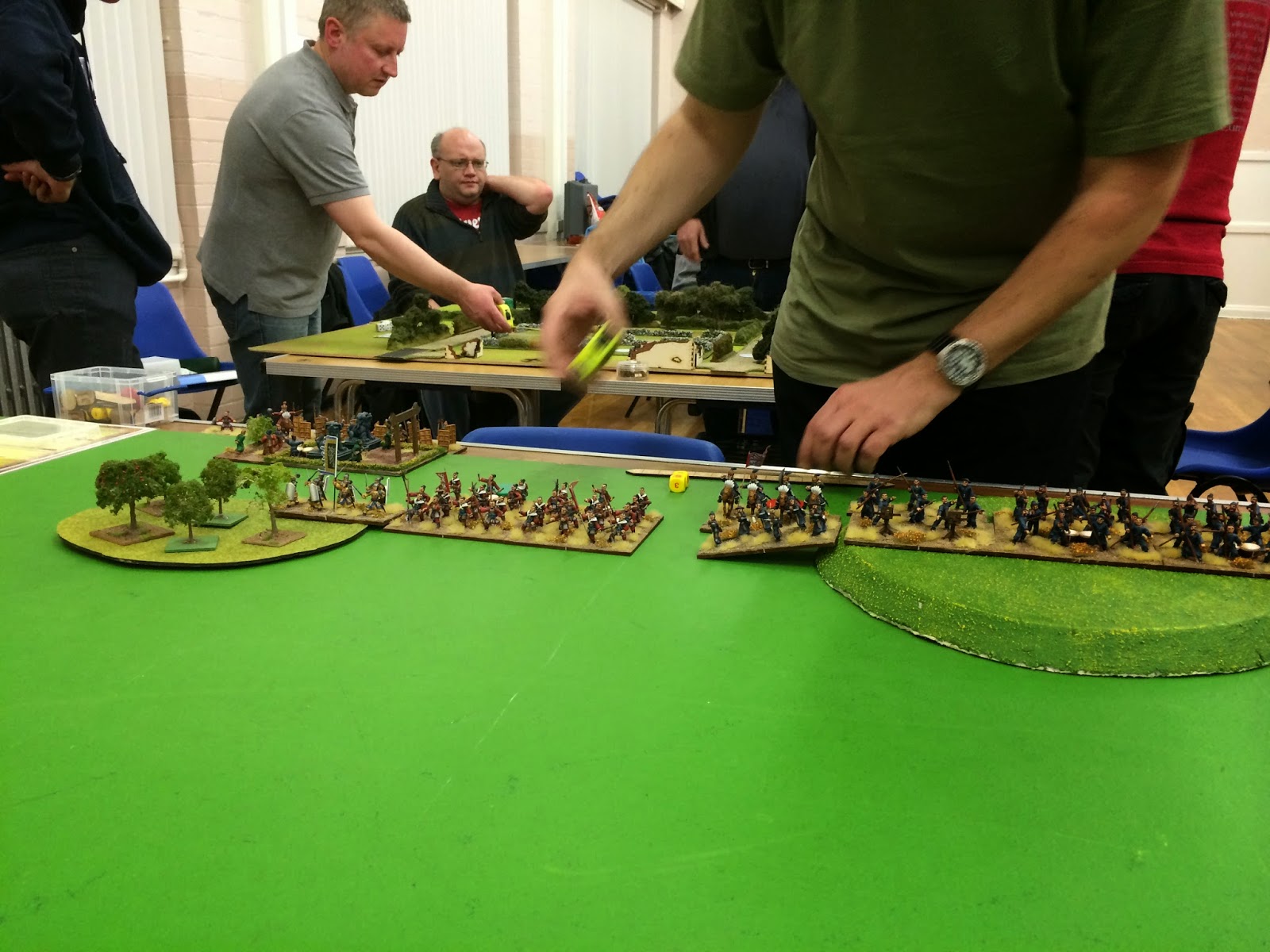 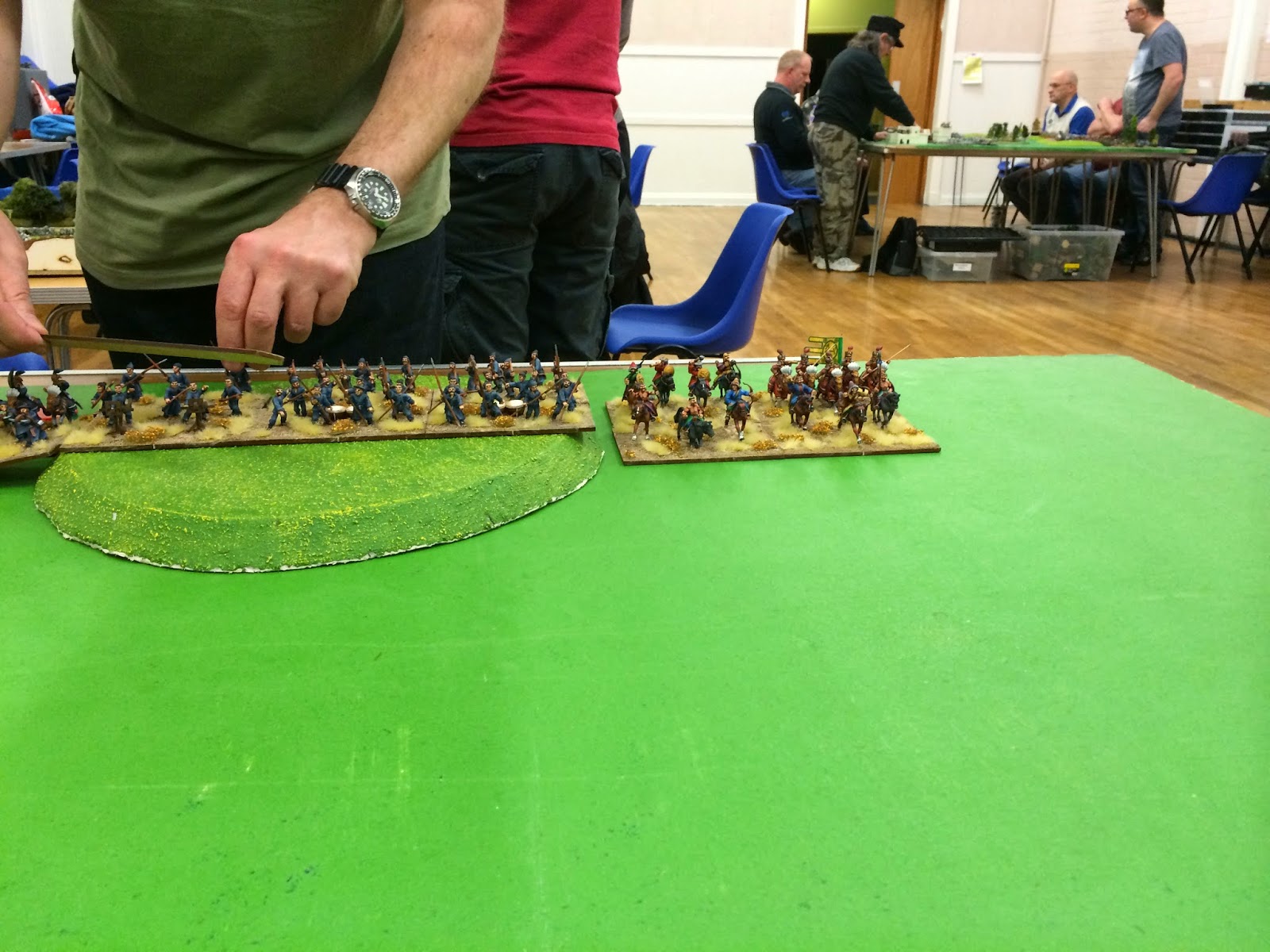 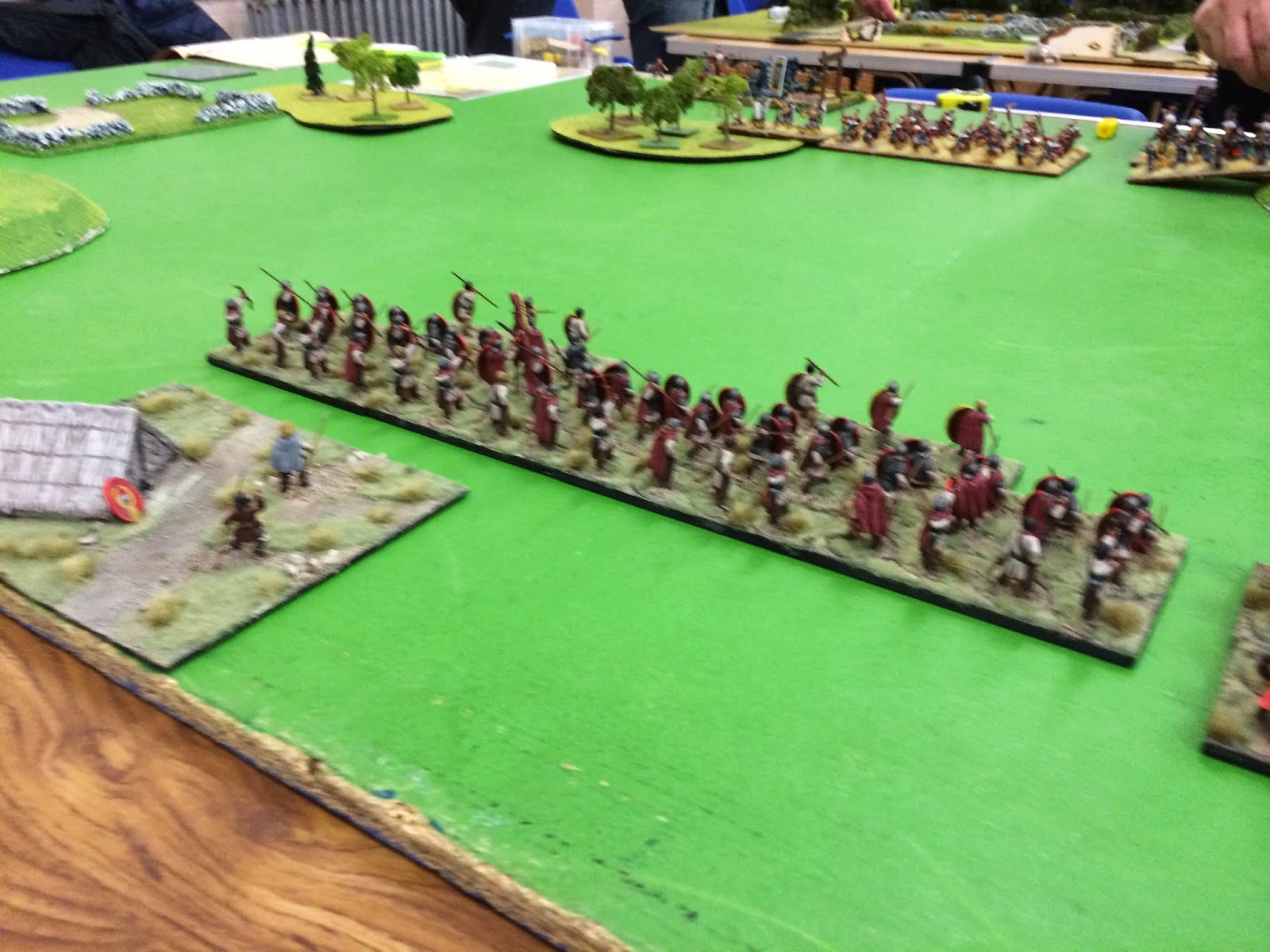 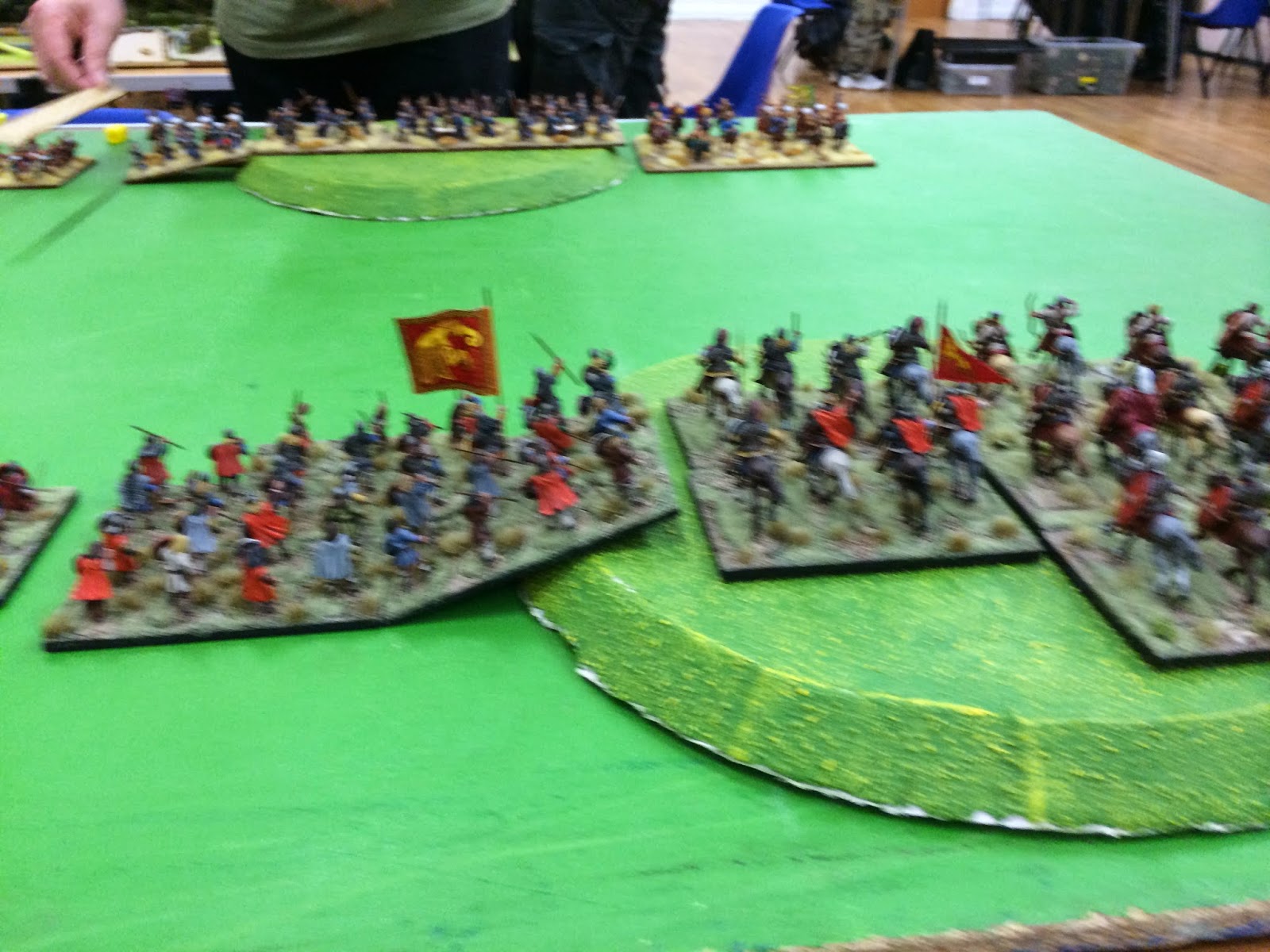 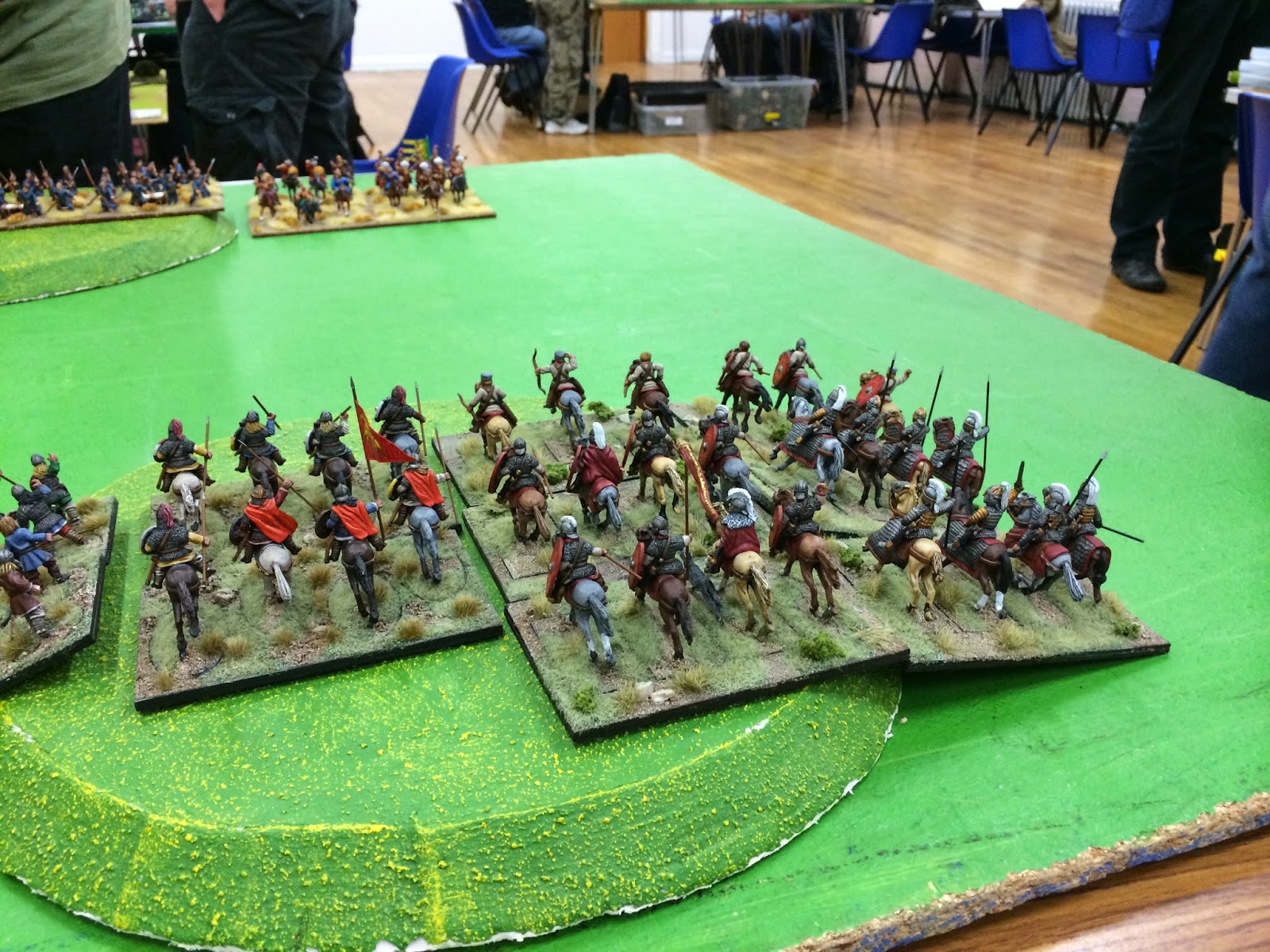 Early game saw me begin the long slog across the table. Fraser made it pretty clear that he did not plan on advancing so it was up to me to close the distance into the teeth of the enemy crossbow and artillery fire.  Meanwhile on my right flank I tried to get stuck in with my cavalry but some early shooting casualties and the limited space severely limited any progress. 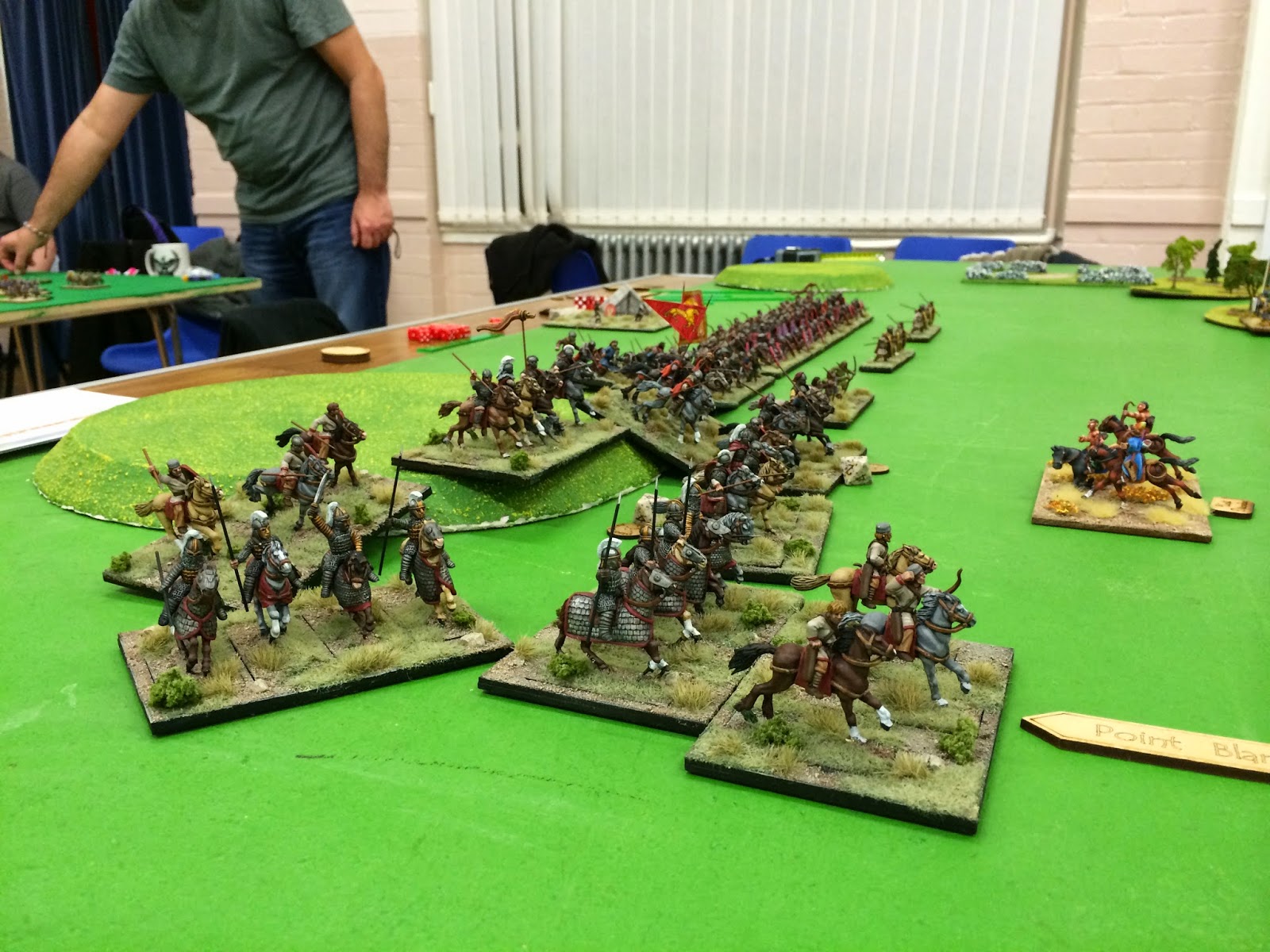 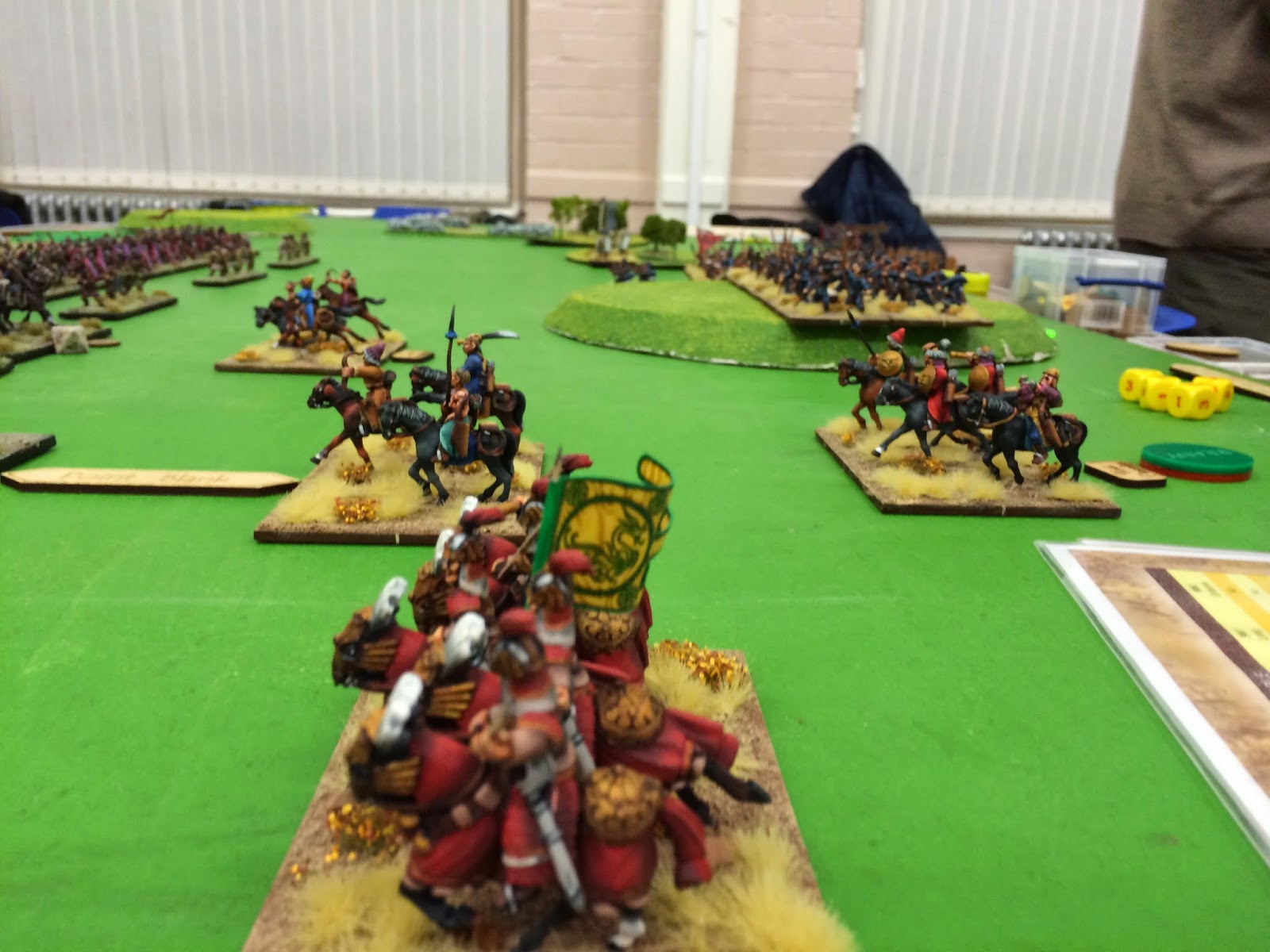 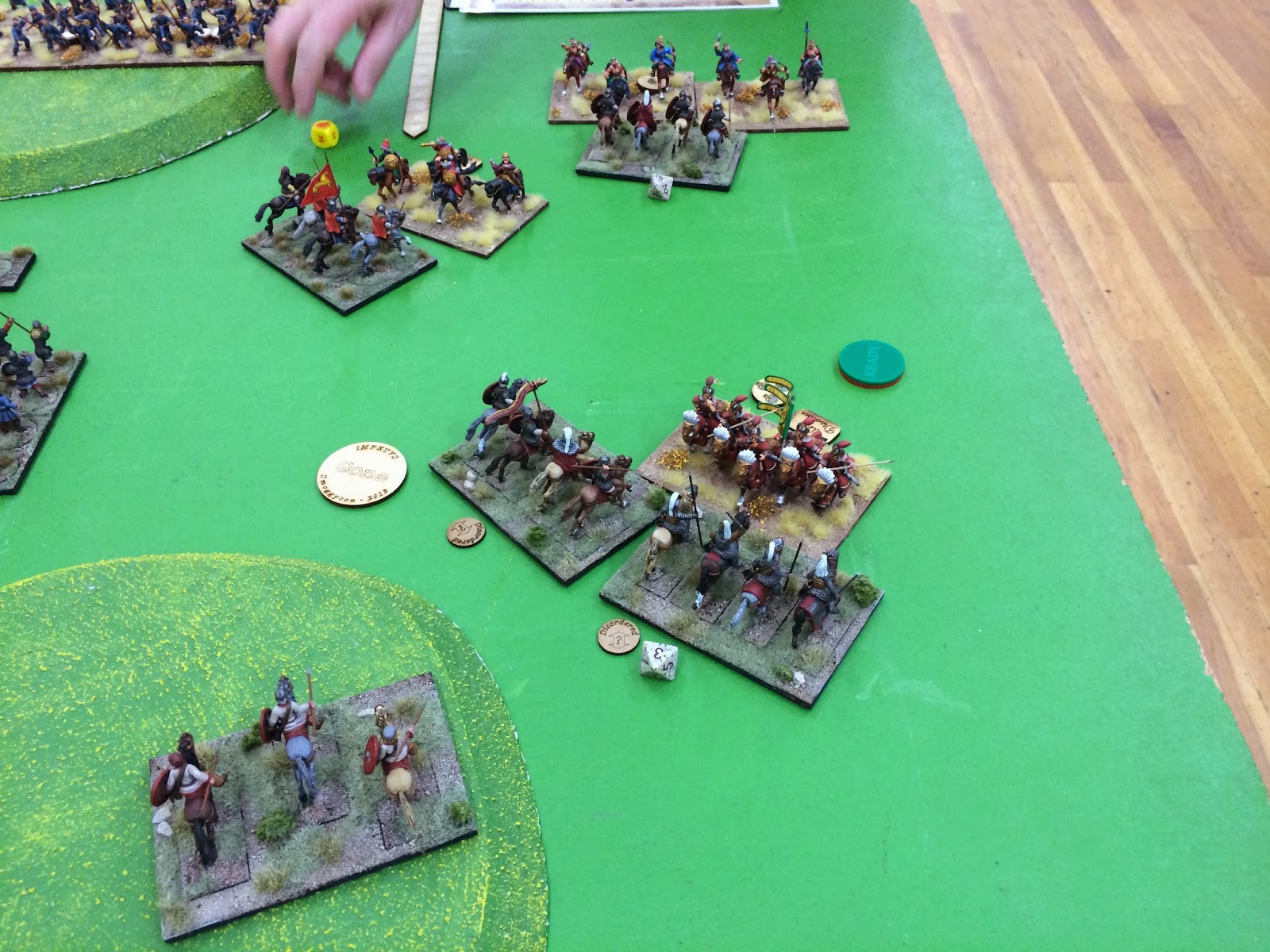 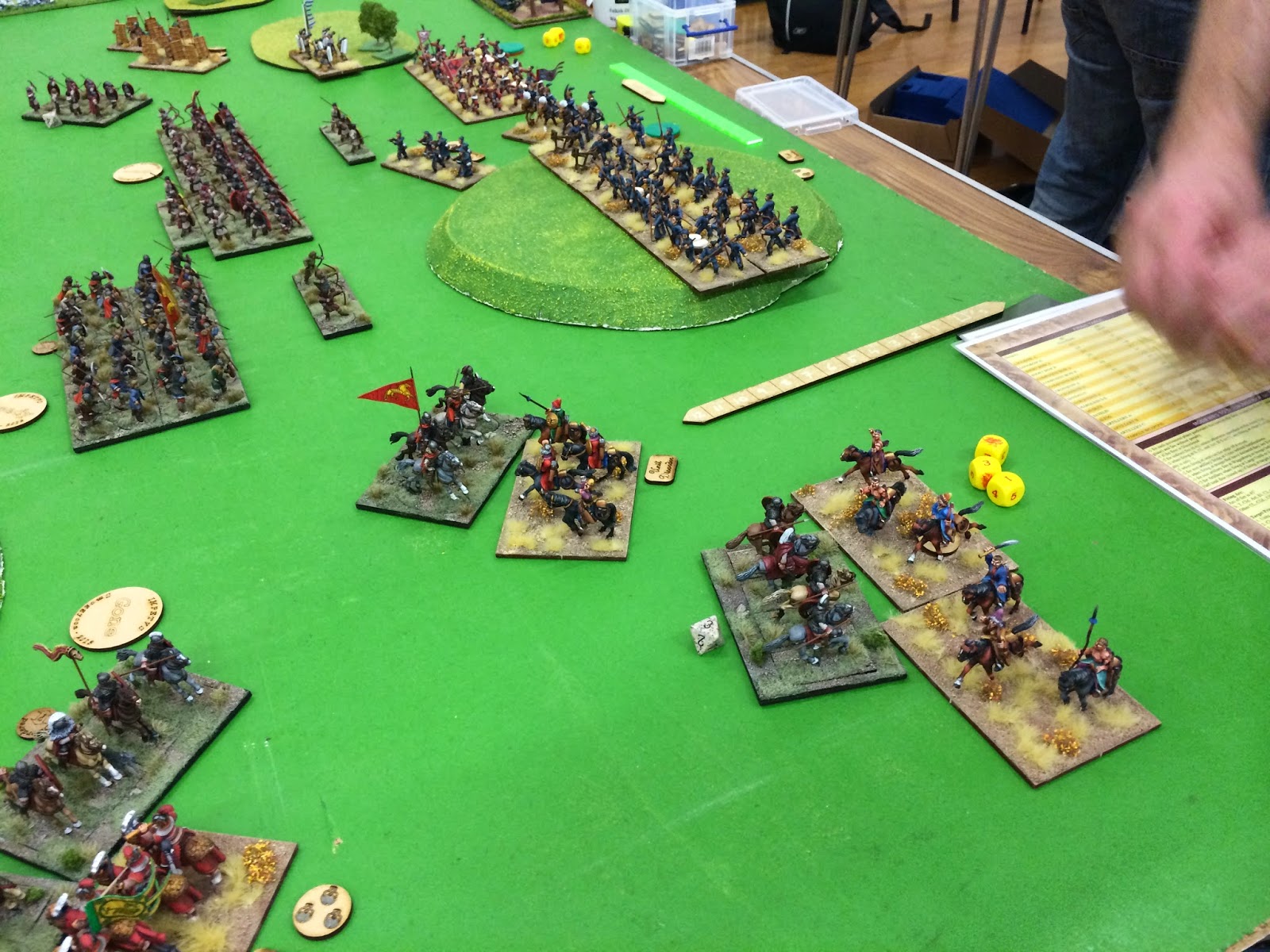 This was set to be a rather frustrating night, with Fraser having some extremely successful shooting and causing me no end of trouble.  He quickly got two of his three generals to raise a command level as well and managing to get the better of me in almost all of the melee's that we fought.  It took me most of the evening to slog my way across the table with my infantry, taking some losses on the way. Unfortunately I was so focused on just getting across the table that I let Fraser get the drop on me and ended up on the receiving end of the Chinese infantry and getting a serious duffing over.  My cavalry were gradually managing to grind down the Chinese cavalry, but should have managed it a lot more quickly considering I had an advantage. I cam very close to eliminating Fraser general but alas my cavalry reverted to type and managed to make a mess of things. In fact my whole army generally performed pretty terribly, with a lot a sixes being rolled for cohesion tests. 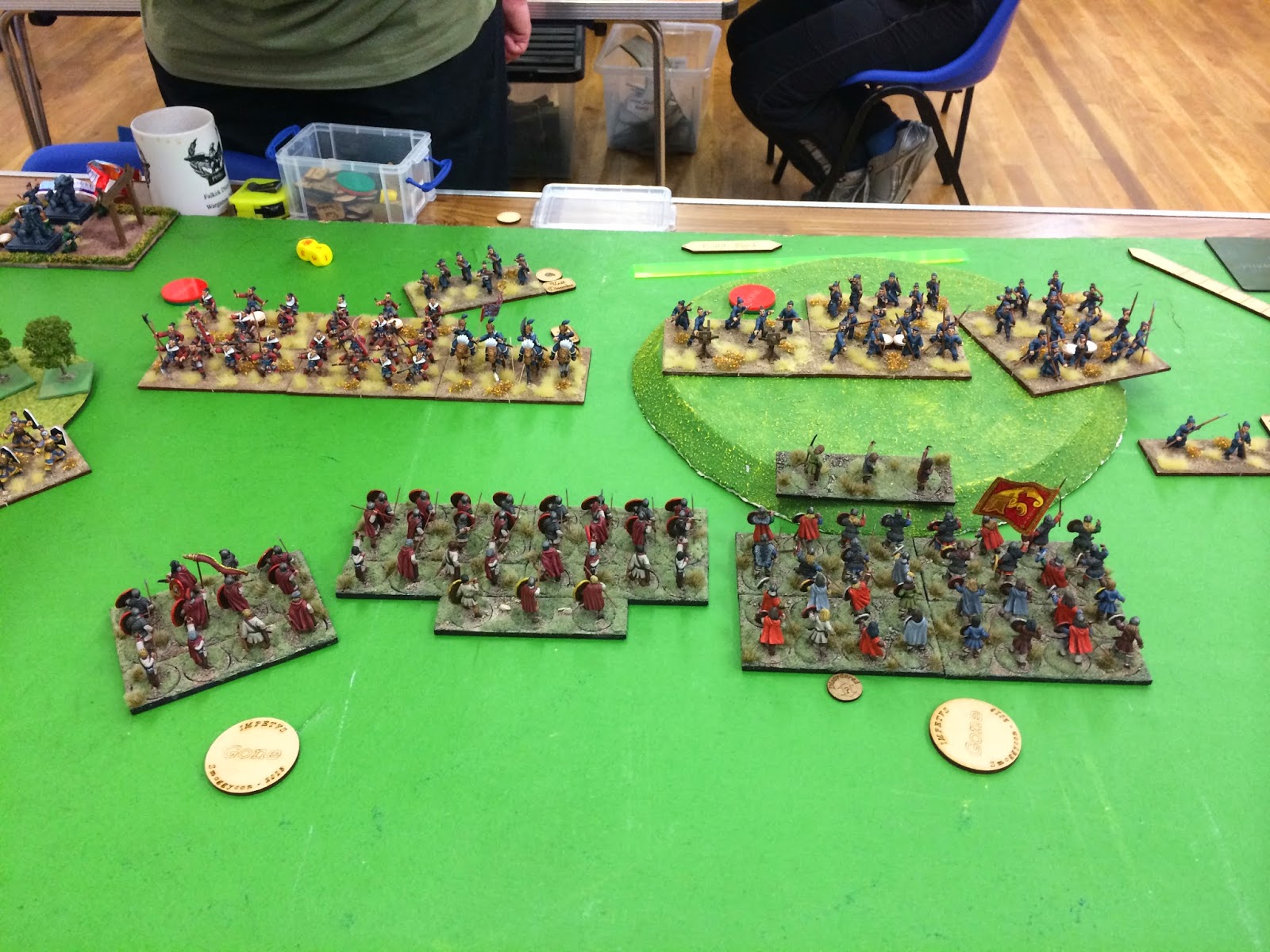 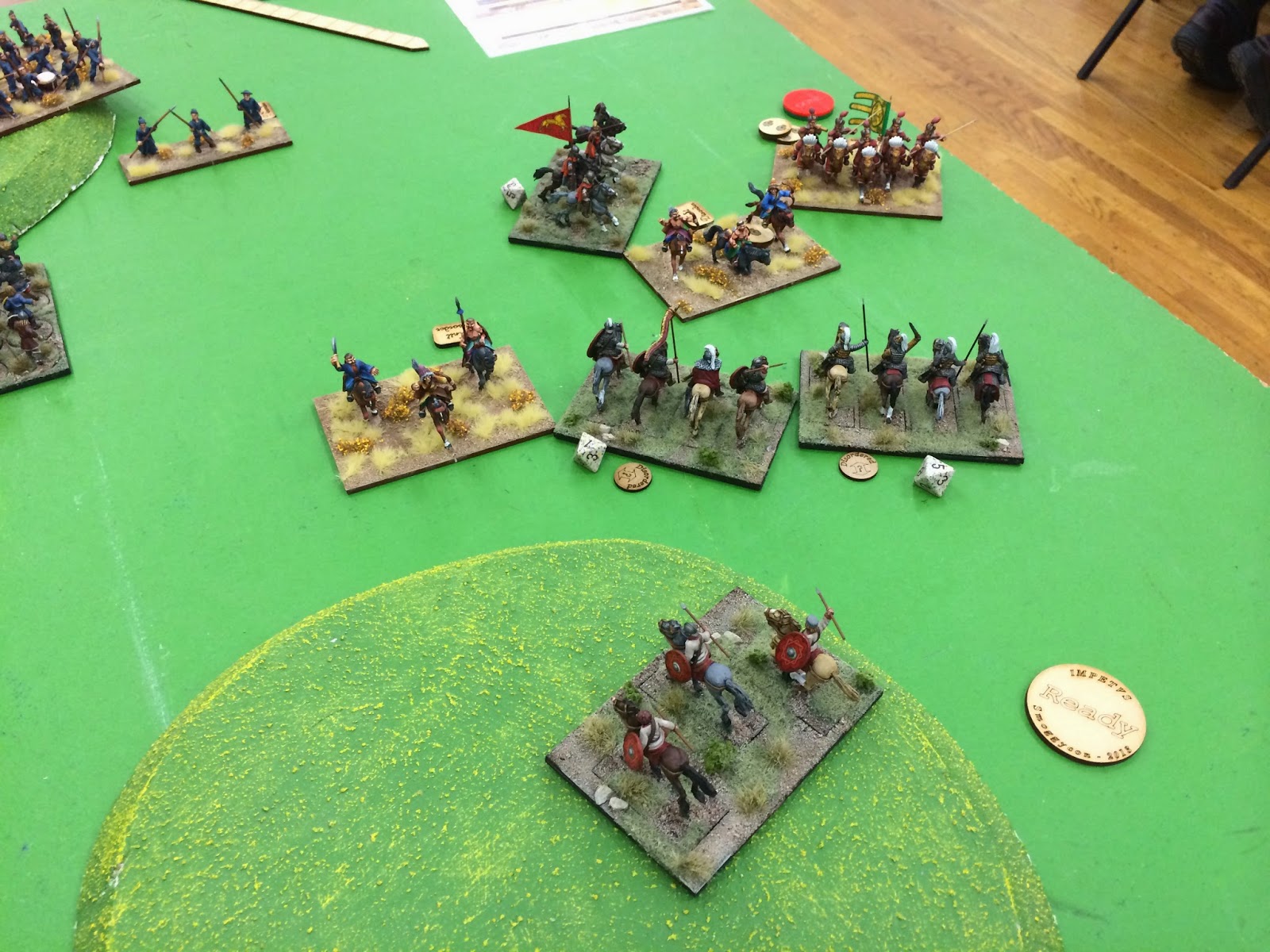 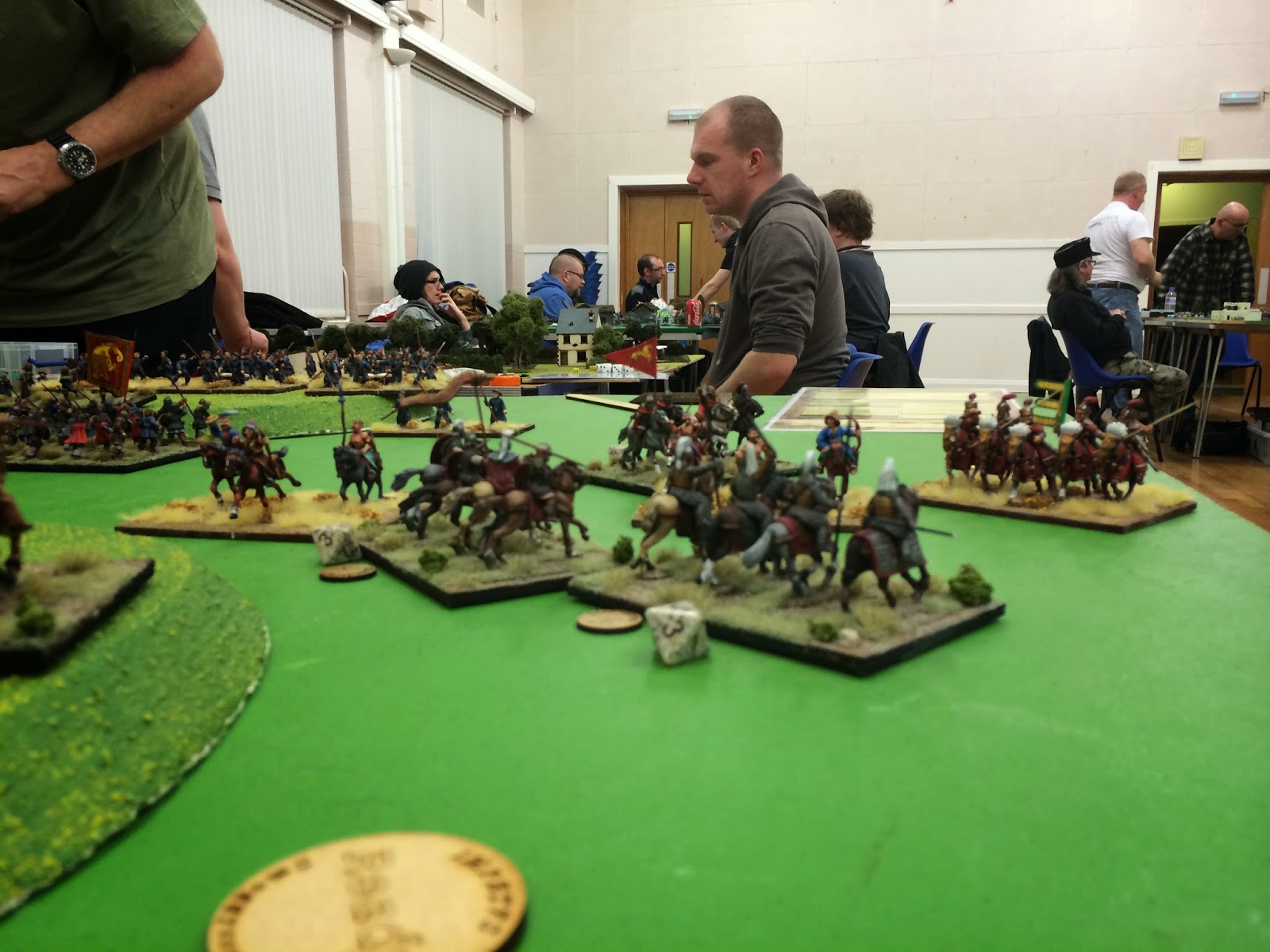 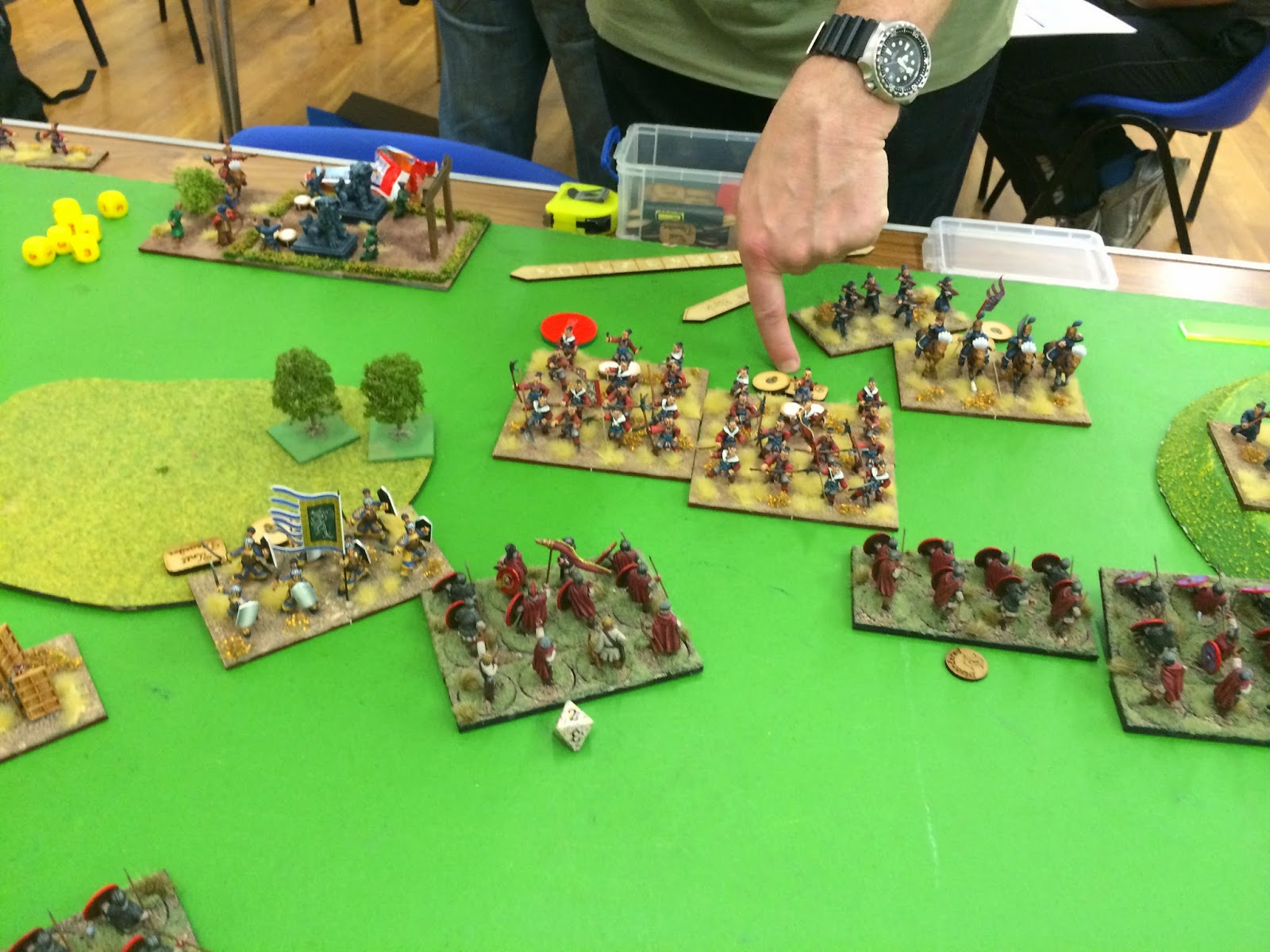 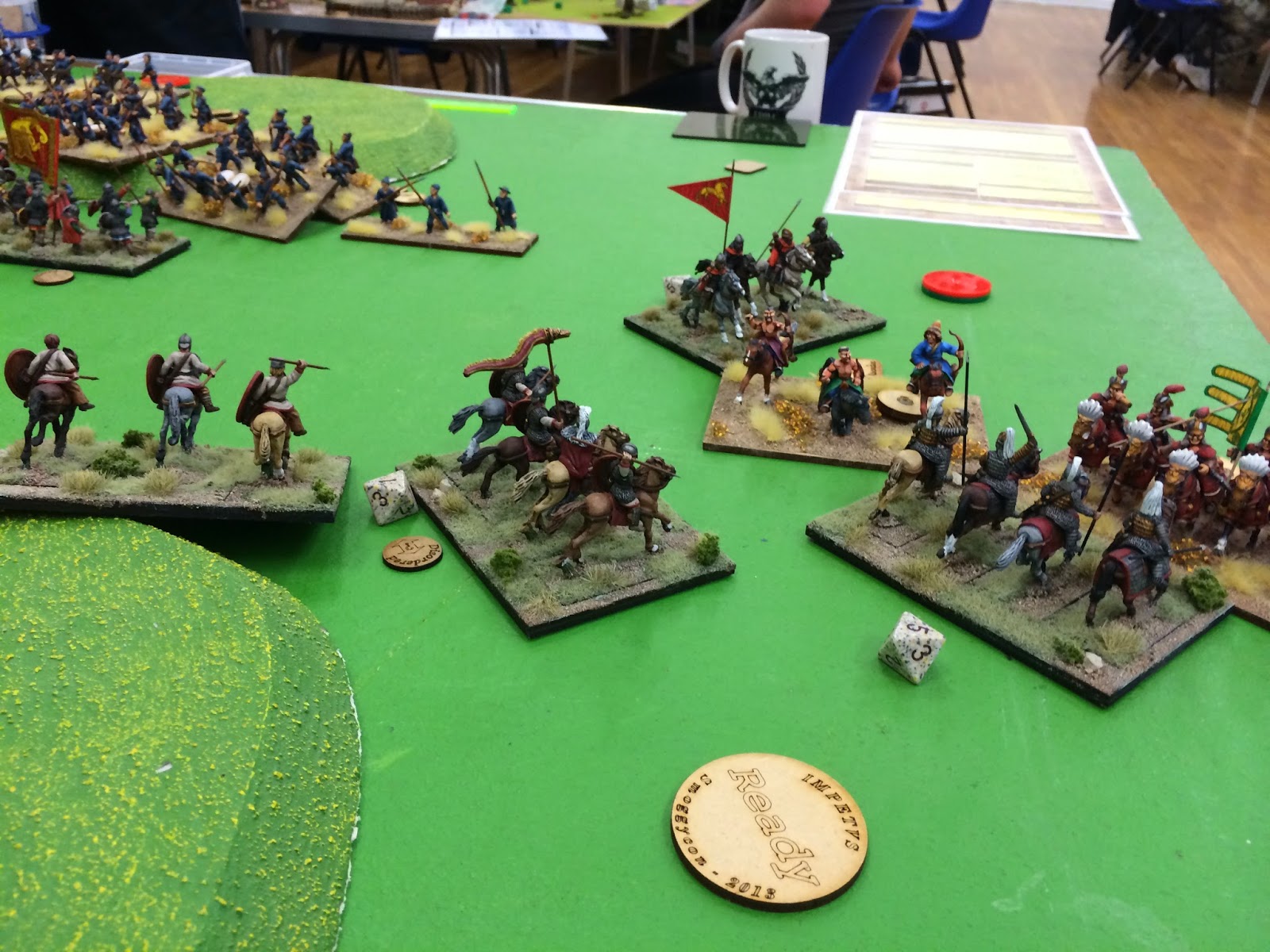 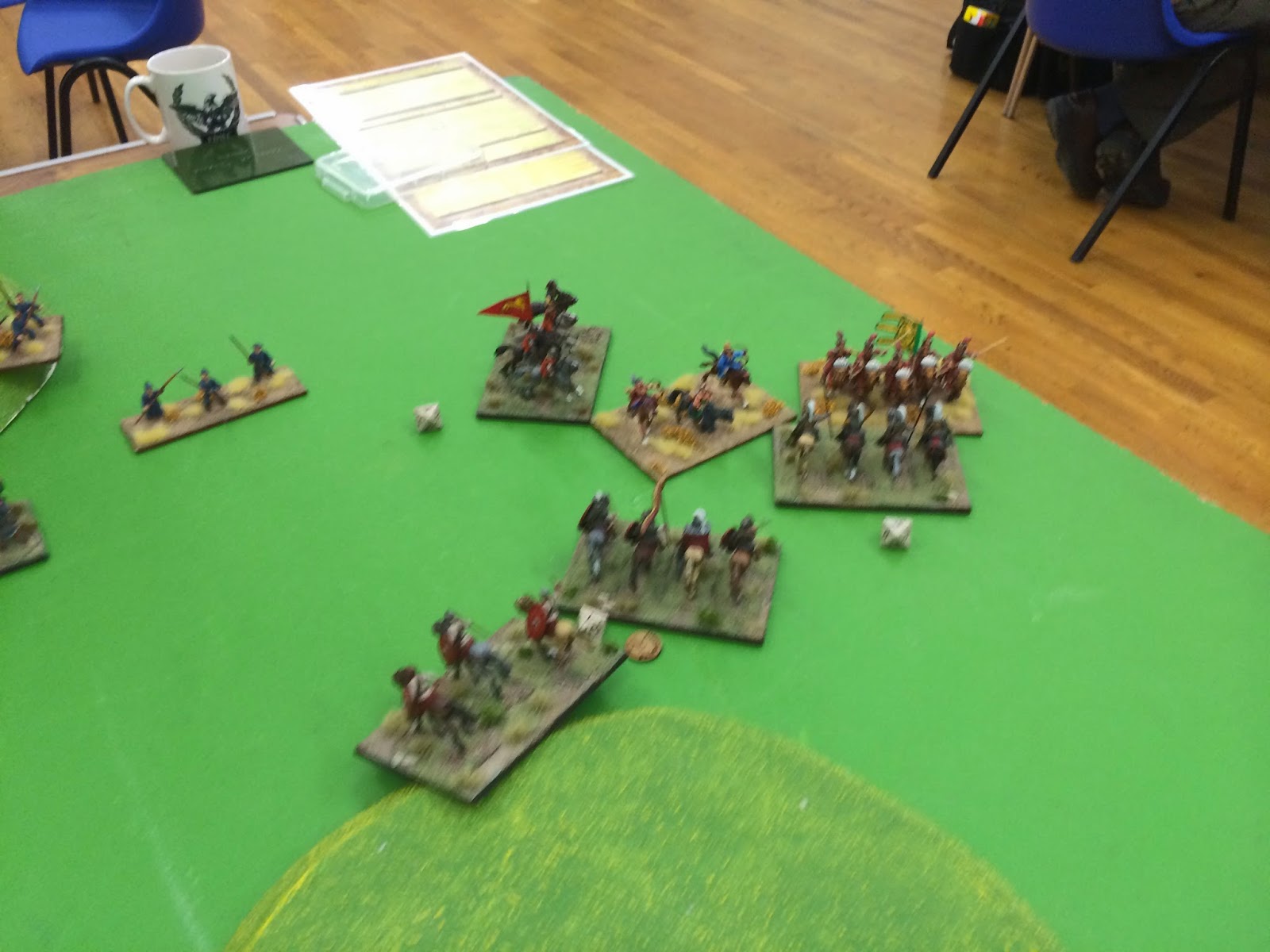 In the end we stopped before the game had reached an official conclusion s it was getting late and I was in no position to do much of anything to salvage what had turned into a disaster.  Still good fun, if a little frustrating.  I failed to make the most of cavalry advantage and paid the price for it. I should also have hung back with my infantry a bit as well.

I am becoming increasingly frustrated by the Impetuous troops in my army list. The advantages of the large warband seem to be offset by them being so unwieldy. Also while I think the Musketeer Miniatures Saxon range is an excellent range they all have open hands that you have to glue the spears into.  This is in contrast to his Late Romans where all the hands are modelled as closed fists that you then drill a hole in to hold the spear firmly in place.  With the Saxons every time you look at them a spear seems to fall of one of the models.  I have tried superglue, 2-part epoxy and a mixture of the two but I still seem to permanently have half a dozen models with missing spears. It is very frustrating.

Next week is a practice game for our Chain of Command campaign.  I am commanding a German Platoon as we carry out an assault on the French town of Bainthun.