Scouring of the Westfold

I blame it all on the drugs.

Rory, Ian and I had originally intended to do a large Lord of the Rings game using my altered version of the Impetus rules.  However, I have developed a rather bad case of toothache over the weekend and was seriously distracted by the pain in my gums.


The scenario I was going to run was the relief of Helms Deep, which has a nice mix of heroes and lots of troops, so would have been a good way of testing how my altered rules work (more on that later). Unfortunately I completely forgot to lift the case that contains all the heroes and characters for my LOTR collection.  All of my rank and file troops are based up for War of the Ring or Impetus and are stored in A4 file boxes, whereas all the character models, standard bearers and other stuff that wont fit in an A4 file box like Siege Ballista etc are kept in a carrying case full of foam trays from Miniatures in Comfort.  I completely forgot to lift this case and as it is pretty difficult to fight anything from Helms deep without the King of Rohan or Gandalf the White being present I had to quickly find something else to do.

I felt pretty bad but Ian and Rory were OK about it and in the end I managed to find a scenario for the LOTR Strategy Battle Game that did not require any of the named heroes from the books.

In this scenario a small force of Rohan are defending a small village from some marauding Uruk Hai and Dunlendings, who are hell bent on burning down the village.

Basically there were three building and the bad guys had to try and set fire to them, and then stop the Rohan from putting the fires out. Every turn after the building was set alight you rolled a die and on a 4 or more you added one more to the score for the fire. When it reached 6 the building was destroyed.  The Rohan had to destroy the Isengard forces before this happened, and could attempt to put the fires out if they could find any spare manpower. The Rohan also had some reinforcements on the way and they had a chance to turn on up from turn one.  Ian elected to play the forces of Rohan, with Rory taking the Isengarders (a pattern is emerging in our LOTR games here).

The game got of to a quick start and there were a fair few casualties from missile fire, which should have sent alarm bells ringing as missile fire in LOTR is pretty unimpressive.  Then the Rohan reinforcements managed to arrive on turn two as well! 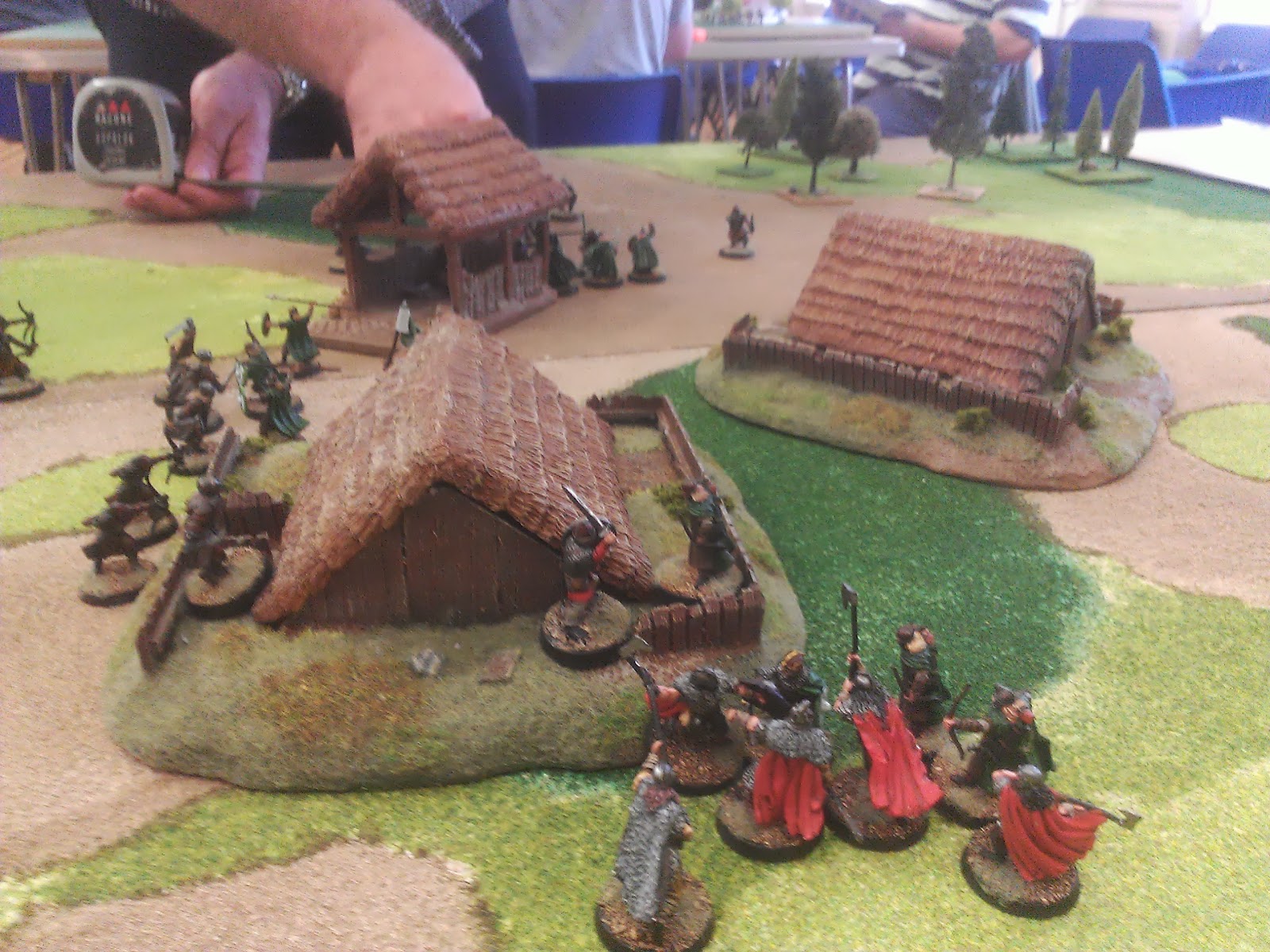 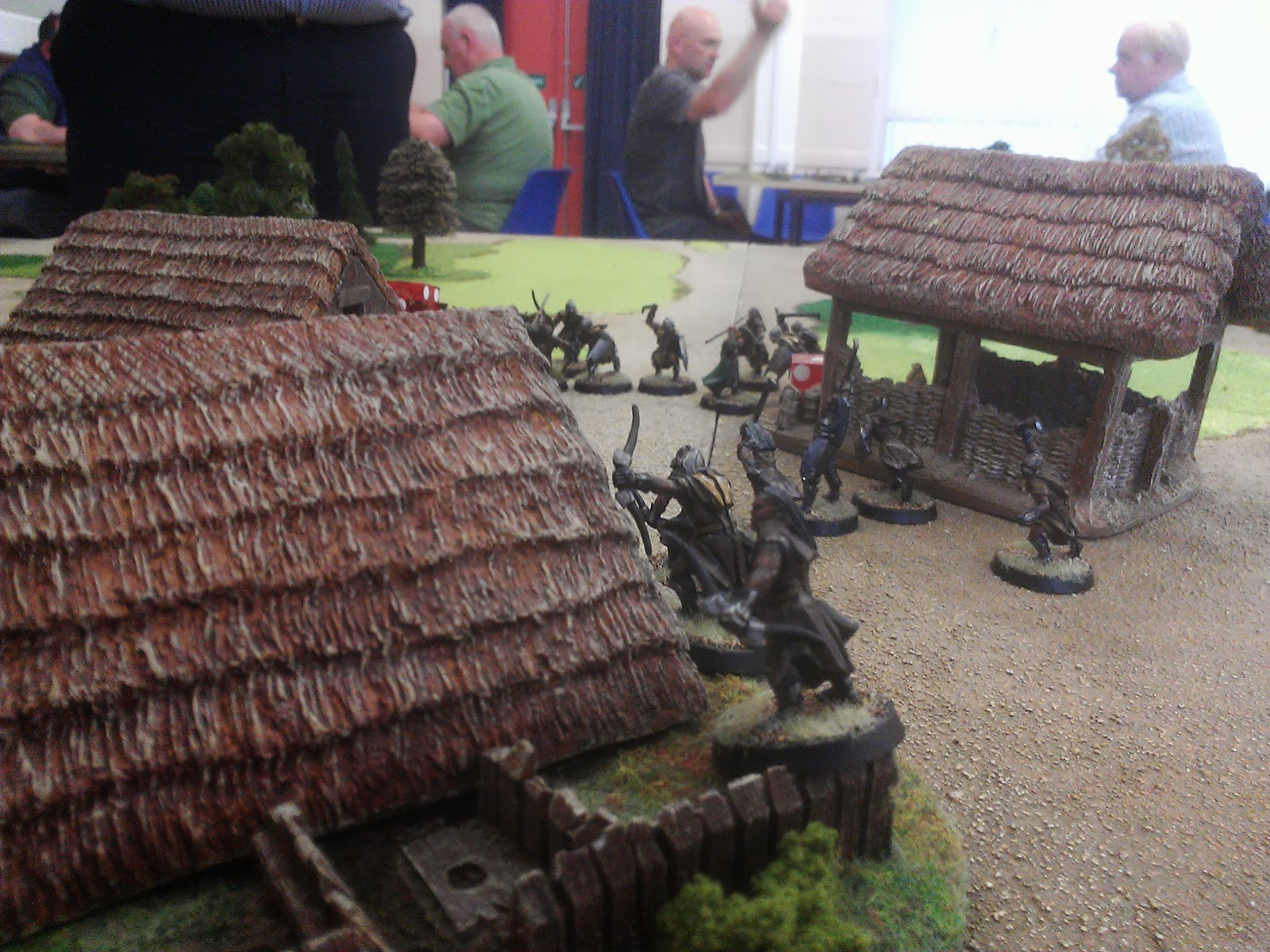 That was about the only luck Ian had in the whole game though, as his Rohan just could not get a break and made a pretty poor showing. They managed to win a fair proportion of the fights but could not seem to actually finish his opponents of.  Only when the cavalry entered the fight did things start to look up, but in the final half of the game Ian could not get the Initiative and with no Might points left he could not take advantage of his cavalry charges.

Eventually all three of the buildings were ablaze and there were just not enough Rohan left to do anything about it. The last turn of the game saw a lone Rohan captain, his horse killed under him facing down a dozen or so Uruk Hai.  Very Heroic but ultimately futile.

Rory  had an excellent evening and his troops performed admirably, pretty much walking over the Rohan with only a few casualties, and used a few sneaky tactics to keep Ian's cavalry busy. Ian had a pretty rough time of it, with his Rohan preforming very under par.


It was an interesting game to watch as I have played this game a half dozen times against Kenny, another club member and I have used the uruk Hai every time.  The best I have ever managed is a draw, and then only once. Every other game has been a resounding success for the Rohan. Perhaps it is always raining when my Uruk Hai are trying to burn down the village?  That is my usual excuse anyway.

Both the guys seem to enjoy the game, even though it was not what was originally offered, for which I must apologise.  In the end though Lord of the Rings is an excellent set of skirmish rules that I doubt I will get tired of using for a long time.

For LoTR mass battles Games Workshops War of the Ring looks great because of the numbers of models but feels pretty flawed, probably due t the fact that they were trying to use the profiles from the skirmish rules and turn them into a mass battle game, instead of just writing a new set of rules.  That is why I started playing about with the Impetus rules for my mass battles.  I basically use the Impetus combat and shooting mechanics, but use the War of the Ring turn sequence, along with the inclusion of Might points to represent the powerful heroes that are the staple of a good fantasy story.  I hope to have another try at these in July, and will no doubt post a report then.

No firm game arranged for next week, so will just turn up and either try joining one of the wide selection of games available on a club night at Falkirk District Wargames club, or just hang about and be sociable.