No updates again for a while, still largely due to being busy the app making it very difficult to actually add decent photos.

So we are now 5 weeks into 2019 and gaming activity is starting to pick up again. There was a bit of a lull over Christmas when family stuff took front and centre.
So what has been happening on the game front?
Pretty much more of the same really.  My Kings of War Vanguard Kickstarter from Mantic arrived on time last year and I have been painting up my Northern Alliance Warband to use with that.  I also had to purchase some Frostgrave Barbarians to use as basic grunts as Mantic haven't released any to use (why wouldn't you do this Mantic?).  With that completed I now have a pretty sizeable selection of models to choose from when playing the game.  I still need a few elves with bows to complete the warband, but I am not a fan of the Mantic elves and also don't think that they fit in with the Northern Alliance Warband aesthetics terribly well.  The best match I have found so far have been the old Warhammer Fantasy Battle Wood Elf Glade Guard, as they are all wearing heavy cloaks that if painted right would look the part. Unfortunately I only want 2 and even on e-bay they seem to be sold mainly in groups of 10.  I'll keep looking though and see if I can find some at a decent price. 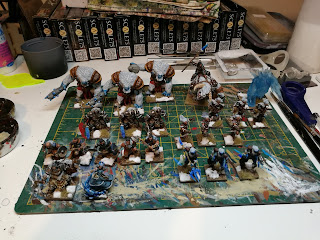 I have managed one game of Vanguard so far, against Ian and it was good fun. We even managed to get most of the rules right.  I am going to raid my old WHFB Orc army and put together a second force so that I can run some demo games at the club to try and drum up some interest.
I have a game scheduled against Dave Knight in a few weeks and I hope he enjoys it.  In the end the basic rules are free so all you would really need are the power dice, which are pretty cheap to pick up and even then you only need one set so not an essential purchase as long as one player has a set.
The juggernaut that is Titanicus is also rolling along.  With the release of the Titandeath supplement the game now has a bit more depth to it, as there are now rules for individual Legios, giving each one its own character and style of play.  This is essential when every army in the game is basically using the same 5 models for their forces.  I have held off finishing my titans until the supplement came out but now that I have I have made a few decisions and am now starting to look seriously at getting the first of my titan forces completed.
My plan for this game has always been to have enough so that I can run games, including two full Titan Maniples, supporting knights and a good set of terrain.  I am almost there with regards to buying the titans that I need, and am really just looking to get extra weapons at this point to allows for more choice in the armament of the individual Titans.  I will probably pick up another Warlord, Reaver and couple of Warhounds and then let the game stew for a while to see how it matures.  I may also get some more terrain, as while all my Epic 40k terrain is suitable I don't think the buildings are really big enough so will be looking into getting some more, bigger buildings.

There's now four Titanicus players at the club including myself so I should be able to get a decent amount of games in the future.
Games Workshop have also been continuing with their reboot of the Lord of the Rings game, or Middle Earth Strategy Battle Game as it is now called.   They have revisited it all and streamlined everything into a main rules book and a couple of books for all the profiles, meaning that my rag-tag collection of Lotr books can now be seriously reduced in size, which my bookcase (and long suffering wife!) are grateful for.   The new books have been accompanied with some lovely new plastic models and the return of a lot of older out of print metal models.  This has made me revisit my collection and look into expanding a few forces that I had bought bits of for the scenarios into full matched play forces, and I think I can accomplish another three forces on top of my large Rohan and Isengard forces without too much cost and effort.
The Genestealer Cult codex has finally dropped as well, signalling a serious return to 40k for me, after an absence of around 26 years.  While the current edition of 40k still has a few quirks I don't like, it is much improved from previous editions and the Genestealer Cult range, with the addition of the new vehicle and infantry models has to be my favourite range in 40k at the moment.  I have a large amount of them already that I have been buying up gradually so it will not cost much to get a playable 1000 point force. Just got to get the all painted now!

This looks like a lot of effort and money and to be frank it is, but its a hobby so I just do what I want, when I want to keep it enjoyable. The collecting and painting of the miniatures is as important to me as the gaming so I'm quite happy to spend a long time preparing stuff for the tabletop, and don't see it as a chore (apart from the basing. I really dislike basing models).
The cost of all of this is being covered by selling off old stuff.  Like every wargamer I have large amounts of unused models lying about, either from stalled projects that were never completed (or even started in some cases) or older models from when I was younger.  I have been selling all of it via E-bay and Facebook.  There is a nostalgic movement for older Warhammer miniatures at the moment, meaning that I am able to sell old miniatures and books from that era for decent money.  Its a win-win as I get rid of old stuff that I am never going to use, it helps fund my ongoing hobby purchases and these old miniatures go to someone who is going to give them a second lease of life. Otherwise they would probably end up in a landfill somewhere as I get fed up with them lying around and just bin them.
It has worked out very well so far, with my hobby costing me very little money in the last year or so.  I have a substantial Adeptus Titanicus force, along with rules and terrain and I think that the whole thing has probably cost me a total of 50 quid, above the money I have raised from selling on unused parts of my collection.
The club attendance also continues to grow, with more than 50 attending most Mondays now.  It is starting to get difficult to find a space to put up your table.  Having this many members means that there is a huge amount of choice now, and so far this year I have played:
L'Art de la Guer (twice)
What a Tanker
Kings of War Vanguard
and will be playing Adeptus Titanicus, Vanguard and Lord of the Rings in the near future.
All in all its looking like its going to be a busy year, hobby wise. Certainly for painting and hopefully for gaming.
I am also playing in another Kings of War tournament in March, during which I expect to get soundly thumped, and am off to Salute in April for a weekend away with a mate.
My youngest has also caught the X-Wing bug, and has been spending his Christmas and birthday money on spaceships. he recently got given a 40k dreadnought for his birthday and loved building it so is looking to pick up some more in the near future.