July already!  How did that happen?

So as we are half way through the year I thought it was about time to have a quick look back at the year so far, and cast a few thoughts on the year ahead.

We have playing a Lord of the Rings Battle Companies campaign, and we area about 9 games in now,  I opted for Warg Riders as we needed an evil force to even things out and I had enough of them that I wouldn't need to do any painting.  They started out pretty weak, largely due to poor numbers but are starting to come into their own now as more and more of the wargs are turned into proper cavalry.

I played in a tournament!  I am a big fan of the Kings of War rules from Mantic. it is a great replacement for WHFB.  I am always up for a game and another club member has been talking me into playing. After an initial surge of interest in the game at the club it seemed to have hit s bit of slump, so entering the tournament was a way of getting some games in. After an enjoyable days gaming I even managed a third place, as well as picking up the best army award which was a nice end to the day.  Between jobs, a wife and two kids I really struggle to find the time to get away for a full days gaming, but I will probably make an attempt to attend the next one in October.

I have also managed to play a few games of Art De la Guerre, the ancients rules.  They have been the preferred set among the competition gamers after the demise of Field of Glory.  I have a half painted arab army that will probably be finished nearly next year (maybe) and am looking forward to giving that a few more tries.  I managed to try the Strongsword rules, from Westfalia and they seemed to be quite playable.

In general though I have struggled to get games for the rules that I am interested in. I haven't managed to get much interest in Kings of War, Conan boardgame, AVP or Shadespire. I had great hopes of Shadespire but have failed to drum up much interest in it, which is a shame as it is a great game.

Another thing I have been doing is reviewing my collection and deciding what I want to keep and what I could probably get rid of. I have some stuff that hasn't been out of the box for years.

So far I have been sorting into "keep", "maybe keep" and "get rid off".

So far the keep pile consists of:

My Dark Elves (or Twilight Kin as they are known in Kings of War)
All my Lord of the Rings (It's Lord of the Rings!)
All my Fantasy Skirmish miniatures (for Mordheim, Storngsword, Otherworld Miniatures game)
AVP  ( I like the IP a lot and the models are lovely. I don't get to play but like the models and enjoy painting them)
Conan (great boardgame).
Late Romans (will probably rebase for ADLG)
WW2 Germans (Chain of Command is a great game!)
Shadespire (still a great game and I will keep pushing)
Epic (another great game).
40k Genestealer Cults

My old WHFB Orc and Goblin army. It hasn't been out of the box in a long time, and is now teetering on the edge of the sale pile.
Malifaux ( I enjoyed painting them but there doesn't seem to be any appetite for it any more).
Rogue Trader Orks (I have collected a large amount of older GW Orks to use with 40k 2nd edition, but again I'm not sure how much use I'll get out of them so selling them on is a possibility)

Void 1.1 (I haven't played this in a loooong time so will see about getting rid of them)
Urban War (I still have Koralon and Gladiators for this, but there doesn't seem to be much appetite for it so away it goes).
Warmaster (Chaos army is already away, but there is still a large Dwarf army to sell)
Full Thrust (I still have a couple of fleets to sell. I got rid of all the books last year)
Space Hulk (I have the 1st edition, plus the Death Wing and Genestealer supplements so should get a decent amount for them).

I am still in the process of selling a lot of my older models and that will continue for a while yet. I sold a big pile of books last year but the models take much more effort to sell.

Looking ahead there are a few things coming up that I am interested in.  Age of Sigmar 2 from Games Workshop has just been released and it is looking very pretty. The new models are great (especially the ghosts) and the new endless spells look like great fun. There is no real appetite for it at our club though so I have resisted it so far.

There is a new Lord of the Rings ruleset imminent. GW have reviewed the game and relabelled as Middle Earth Battle Game, so hopefully this will be the ultimate edition. If it looks any good I will pick up a copy.  Most of my visits to Middle Earth are scenario, narrative based gaming though so I don't really feel any pressure to pick it up.  I skipped the Hobbit rules, probably due to a vague sense of disgust as the movies were so terrible but might pick this up.

40K Kill Team. Warhammer 40k has a severe case of bloat these days. With entire armies of knights and superheavies possible it is all a bit much to put on one table.  Kill Team may be the solution, with only about 10 models a side on a small table. I would still like something a bit larger (perhaps 40-50 models a side with a couple of vehicles) but it could be fun to play this small. 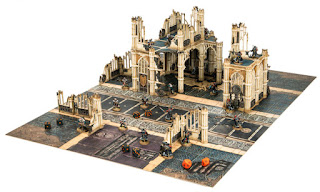 Adeptus Titanicus:  40k in a decent scale.  The cost is likely to make me want to cry and but I am following it with interest.  I love the models and the rules look interesting.

I am also looking to the 40k codex for the Genestealer cults (GSC). I love the models and have amassed a load of them before 8th dropped. I haven't touched them yet but will follow the new codex with interest. Some new Cult models were accidentally leaked by GW recently and they are very nice. I like the GSC as the faction does not suffer from he bloat of the older races as GW have tried to shoehorn more and more models into the range in an effort to get more money form those people that play those races.

These new games have all caught my interest this year, but as usual will depend on whether or not I can get anyone to play them!  There are a couple of people in the club who already play 40k so should be able to get games of that, and Kill Team should be ok. Adeptus Titanicus may be a hard sale though!  I may end up buying a little bit of everything, just to paint as at the end of the day I spend far more time painting miniatures than gaming with them.

I am going to try and get a few more games of Otherworld Skirmish in as well. There are a couple of people who may be interested in giving it another bash, and I have a large collection of fantasy miniatures painted that need using from something.

Painting wise I am just planning on just enjoying myself this year. I spent the first part of the year working my way through all the Shadespire expansion, a big pile of 15mm cavalry and some new units for my Kings of War Twilight Kin.  I am probably going to spend the rest of the year painting one-off models that have caught my eye. At the moment I am painting some fantasy models from the excellent Westfalia and Hasslefree ranges, as well as working on some terrain.  I may paint some Predators and at some point in the future feel the need to paint up a 40k Kill Team as well, but at the moment I am painting for the sheer pleasure of it.

I may even update he blog again at some point!