I have been watching the development of the "9th Age" rules set for a while, but had never really thought anything of it.  The (9th Age is basically a fan made 9th edition of Warhammer Fantasy battle. It started out as 8th edition with a few rules tweaks, but is now heading the direction of being its own rules set.
Andy, one of the club members is a big fan and has been trying to get everyone inot the game. I have resisted for a while but finally caved and we had our first game last night. 4500 points, my Dark Elves against his Empire, or whetever they are called to avoid copyright infringement.
My army consisted of:

1 General on a big Horse
1 Warrior Priest Type
1 Her with Battle Standard.
20 Spearmen
20 Spearmen
30 Greatswords
1 Cannon
1 Mortar
1 Wizards Wagon, or something.
1 Units Inner Circle Knights
1 Unit normal Knights
12 Archers
4 Demigryph Riders
Deployment was fairly standard, with all the infantry facing off against each other, with the cold one knights and Bolt throwers on my right flank, facing off against 2 units of knights, and a unit of Demigryph Riders on my left flank facing off against the Dark Riders and eth Shades.
Andy managed to lose the roll for first turn, allowing me to open things up. I managed to inflict some casualties with shooting, killing some knights and one of the Demigyph's, but apart from that didn't achieve much. Andy's opening turn involved some very accurate artillery fire, as his cannon damaged the cauldron of blood (imagine the mess!) and the mortar landed a shot right on top of the Corsairs, but thankfully the damage was limited.
Mid game saw some more of the same, with the Dark elves trying to inflict as many casualties with shooting as they could, concentrating on the mounted part of eth Empire army. The Empire artillery continued to be pretty effective, hitting the cauldron of blood again on his second turn, destroying it and landing a mortar shot directly on the Witch Elves, killing a third of them.  Dark Elf shooting also proved ot be effective, reducing the Demigryphs to a single model and damaging the wizards wagon (sorry, forgotten its name). 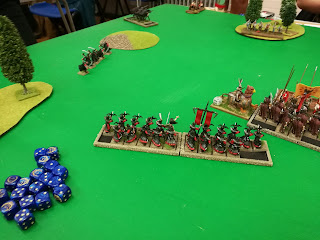 Mid game and the infantry in the middle finally met, with the Corsairs and Witch Elves charging the spearmen, and studiously avoiding the deathstar looking unit of Greatswords. Both units managed to inflict heavy casualties on the empire units, but unfortunately both held their ground.  The turn after saw the Greatswords go into the flank of the witch elves, reducing them to a couple of models, but not before they managed to reduce the spearmen to two only two men.  the same happened to the Corsairs, with the remaining Demigryph charging them in the flank. Casualties were high the Corsairs were broken and run down by the Demigryph, but once again managing to reduce the unit of spearmen to a couple of models.  ON the Dark Elf right flank the Dark Elf general was charged by the other unit of knight, but he managed to kill 4 of them, receiving 2 wounds in return and the combat remaining deadlocked.
The Demigryph managed to pursue into the Crossbowmen (crossbow elves?), who excelled themselves in the next turn by seriously wounding the giant chicken.  Sensing things were going badly the Dark Elves charged everything they could. the Harpies charged the Mortar, the Dark Riders charged the Cannon and the Cold One Knights charged the Inner Circle Knights, who had up to this point just sat on a hill looking menacing and not wanting to get their freshly polished armour dirty. It was a long charge but they were lucky and made it in, with the Dark Elf nobles making a big mess of the human knights, who despite the presence of the general fled of the field.  The Crossbow elves, in a feat of bravery managed to kill the remaining Demigryph Knight as well.
By this time troops were getting pretty thin on the ground for both side, but we kept going. In the final turns of the game the Empire General fled the field, the remaining spearmen were mopped up by either magic or shooting and the empire wagon was destroyed by the Bolt Throwers.
End game saw just the large unit of Greatswords and archers left on the Empire side, with some scattered remains of various light units, the crossbows and the Cold One Knights left on the Dark Elf side.
My first taste of 9th age was fairly enjoyable, probably due mainly to having an opponent who was great fun to game against.  9th Age itself feels pretty much like another version of WHFB, which it pretty much is.  The rules are a bit tighter, but slightly less fun, I think. A few sections have been sanitised so much that they seem quite dull. Artillery don't have templates any more. I thought that was quite an entertaining part of the game.  While there is no faulting what the designers are trying to do, I think sometimes they don't quite have the same sense of the fun that previous edition of Warhammer had.
The line of sight rules also seem a bit strange. I remember the fuss that was made when 8th came out and you could shoot through forests etc. In the 9th Age you can even shoot through your own troops, with regiments proving to be no obstacle to line of site. I find this a bit jarring and it reduces the need for clever deployment as you can just shoot through eth troops in front of you.
Magic is also a sticking point, with the expensive wizard in the Dark Elf managing a grand total of 2 spells all game, neither of which were of any real importance. In hindsight the points would have been better spent on something else, like a chariot or a Hydra.

in general I had a good game, and enjoyed it. At the end of the day it is just a version of WHFB with a few tweaks on the edges, much the same as any of the previous editions. The real sticking point with 9th, as it has always been is trying to produce 15 or so balanced army books, all with their own play style and identity, and that is where they will struggle, I think. Just like previous editions..........

Next week we are back to Mordheim for a trip into the catacombs, so my undead should feel right at home.