This Saturday saw my annual trip up to Kirriemuir for the last show of the year, Targe.


This year was a bit different though as I had volunteered to put on the club demo game this year, and had opted to take my War of the Ring Isengard and Rohan collections.  It was really just an excuse for me to get most of my collections on the table and have enough time to play to a conclusion, as on a Monday there just isn't enough time to have a really big game. To top it off I had managed to add another two units of Uruk Hai to my collection, mostly by just retouching old second hand models I had in the garage and then re-basing them to match my existing collections.

The scenario I opted for was from The Lost Tales, and details how Rohan, led my Theodred the Kings Son crossed the River Isen and headed North to try and defeat the forces of Isengard before they could enter Rohan. It did not go well for Rohan, as this action led to the first battle Isen Fords, and ultimately Theodred's demise.

The game involved my entire Isengard collection, around 300 models and most of my Rohan, of around 100 infantry and about 60 cavalry.  In terms of points they were roughly equal, working out at about 2500 a side.

The game itself played pretty much as expected, with the clearly outclassed Rohan trying to shoot as many Uruk Hai as possible before the two forces contacted each other, at which point the Rohan were pretty much ground to dust.  In the end there were only a couple of Rohan formations left on the board, and a lot of depleted Uruk Hai formations. 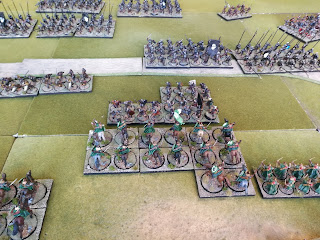 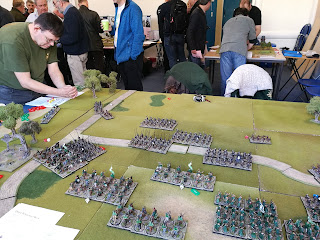 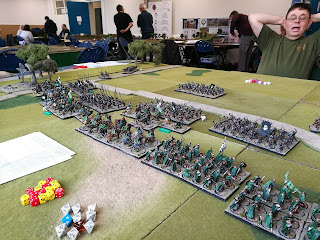 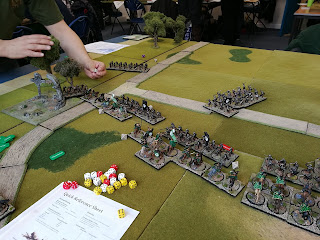 I did not see much of the show itself as I was running the game all day, but there looked to be the fairly usual mix of historical games floating about, with a smattering of sci-fi and fantasy, although they mostly appeared to be sponsored by the companies that made their games.

As for the game itself, as expected the Rohan got a drubbing. I like the War of the Ring rules, principally for the turn sequence and the way heroes can break the turn sequence, but there are a lot of flaws.
The main one being that the game is basically one of attrition, with whoever has the heaviest armour inevitably winning.  The Uruk Hai are a very heavily armoured force, with their basic troops all having heavy armour and shields, or pikes. The Rohan however are not, with the basic infantry not even having armour (god knows why, as the models are wearing armour), plus the army does not actually have any heavy hitters in it, apart from the Royal Knights (and that's pushing it!).  I think I am going to have a serious look at the rules in future and try and find a way of balancing them out a bit more.

Running the game also didn't leave much time for shopping either, which I considered a good thing as I did not want to make any impulse purchases. In the end I pretty much stuck to plan and bought myself a carry case from Figures in Comfort to hold my expanding Dark Elf army for WHFB/Age of Sigmar/whatever.

One nice surprise was a prize in the painting competition!  I had entered my Stormcast Eternals, but did not really expect to get anything from them. I then completely forgot about it as I was paying the game until Kenny came through from the main hall and fetched me as I had won first prize in the Sci-fi fantasy group category! That was a pleasant surprise and meant that it was the 2nd time in 3 years that I have won that cup, with a runner up prize last year.

All in all a pretty good day out, and it is was a change to attend a show from the point of view of putting on a display. I thought it looked not to bad, especially as I hadn't really put to much effort into the terrain. This game was all about the massed troops rather than any interesting scenery/terrain.

Email ThisBlogThis!Share to TwitterShare to FacebookShare to Pinterest
Labels: War of the Ring, Wargames SHows