Its Another Bug Hunt

Aliens is a favourite movie of mine, as are the Predator movies. Unfortunately the Aliens vs Predator movies turned out to be rubbish, not a patch on the comics.

I went for the Prodos Games Aliens vs Predator kickstarter in a big way, certainly enough to make some interesting three way games.  I am lucky and have received most of my pledge, and am just waiting on some Predator's, Marines and the wargame rules.

We have had one try out of the rules so far, which while hardly balanced or logical turned out to be a lot of fun if approached in the right frame of mind.  The one thing that spoiled it first time our was the lack of paint on the models.  We had a second game recently, with painted models but they were not based properly as I could not decide how to do it.

I finally made a decision and went for clear Perspex discs for all my AVP models.  This would allow me to use on any surface without worrying about them looking odd or out of place.  If I had opted to base them to match the boardgame tiles, perhaps using the bases available from Fenris Games then they would have looked out of place when used on the wargames table. If I had opted to go for my usual sand and flock then they would looked really odd when used in the boardgame, so clear discs it had to be.   These are available cheaply enough from E-bay.

So far I have only painted up one boxed games worth of models, so that is 5 marines, 3 Predators and 15 Aliens.  I have a bit more than that and this will probably be my big project for this year, as the Anteniciti's Workshop Forward Base is also going to be used mainly for this, although probably with Infinity and Urban War as well. 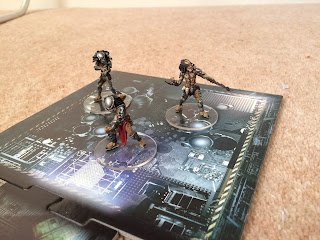 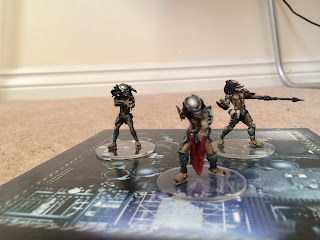 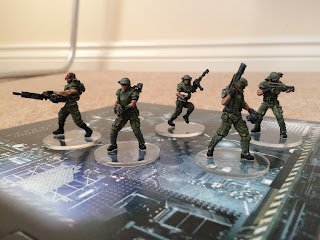 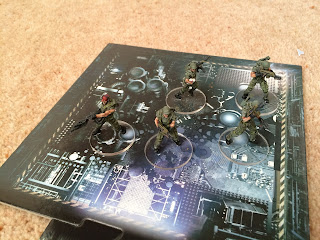 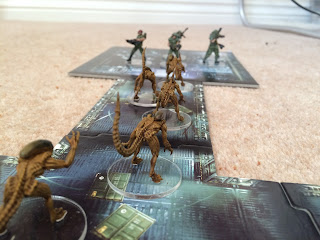 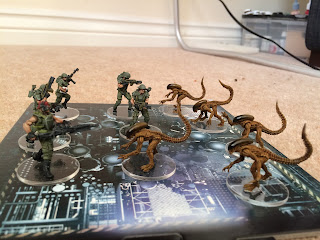 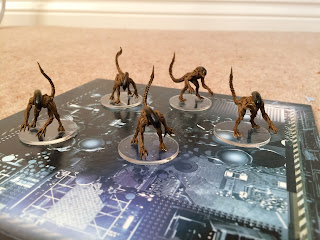 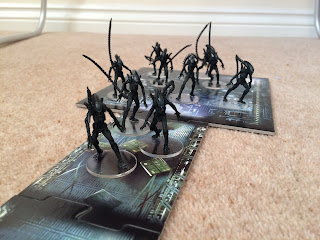 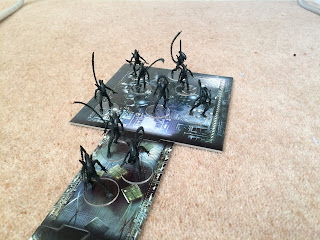 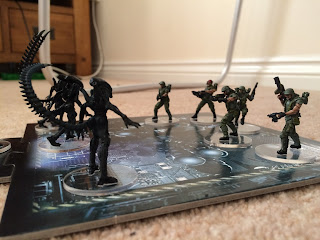 As to the boardgame itself?  We have played it twice now, with a good report on the second game here. Both times extreme luck has had an unexpected effect on the battle.  The first time it was the Predator's inability to make any saving throws, causing them to lose the game pretty quickly. The second time the Predator's did not fail a single armour save for the whole game, making it a complete cake walk for them so some more testing is required.

So far everyone playing the game has not taken it too seriously and rolled with the punches and still had a good time. If you want a tightly ruled and balanced game them this is definitely not for you, but if you want to have some fun with some lovely looking miniatures then it is a good laugh.

I think I will play through all the basic missions in the main rulebook as they are written, and then start looking at the advanced rules and including some of the more juicier pieces, especially for the Aliens as it would be great fun to see the look on everyone's faces when a Queen or Predalien is put on the board.

I am also very interested to see what they do with the wargame rules.

As for the Kickstarter?  I think it has been badly handled, with a company that makes excellent miniatures but isn't project managed terribly well.  There is a lot of vitriol written about Prodos on various web forums, but I don't think they set out to make a mess of this (of course not, who would?) but I think they underestimated the amount of work involved by getting involved with a major IP licence with a company that will aggressively defend it. Having said that there are a lot of people still waiting on their games, so I can sort of understand their annoyance at them.

Regarldless of the background problems, the game is a lovely (if that is the right word to describe a game including Aliens and Predators!) package and I still think that I will eventually receive all my items.
Posted by Kevtheinx at 12:57