July in the Kingdom of Alt Clut saw two sets of raiders try to make away with hard earned British Loot.

The first was a bunch of hairy Saxons from Benaccia. They were trying to raid a village on the border.

Luckily the recently constructed watchtowers helped to warn the British that they were coming.

We rolled for the random placement and deployment, with village being placed in the middle of the board, and the initial British deployment of 3 units was directly opposite the village.

Early game and John split his force in two, with a noble and 2 units of warriors racing to the village, while the balance of his force headed off to intercept the rather prompt British.

The British were obviously eager to get stuck in as the two groups of warriors managed to get stuck in to the Saxon Hearthguard in turn two. The first turn was inconclusive with some casualties on both sides.

They were obviously a bits shocked by this as in the next turn of combat and about 20 dice needing 4's to hit they fluffed the lot. This resulted in one unit being  wiped out and the other routing away from the Saxons. 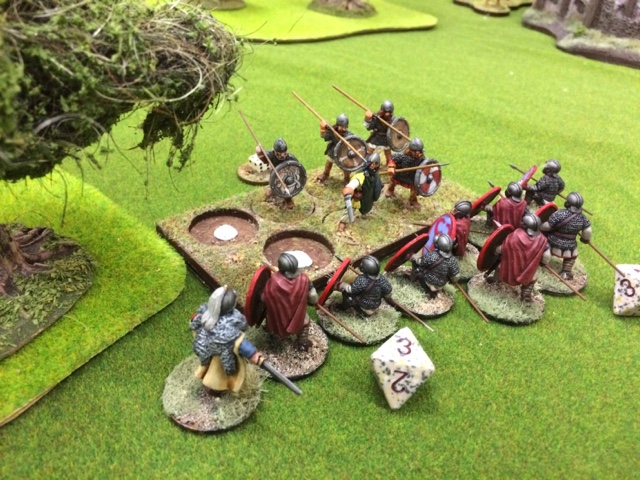 Late game and the Levies moved on to the board. The Saxons in the village were having a hard time finding any loot, with the first two buildings coming up empty.

The pig farmers were obviously out for revenge and all three groups piled on to an isolated group of hearthguard, routing them. The Saxon hearthguard were obviously put of by the smell as the casualties on the levies were minimal.

Late game and the Saxons were struggling, although both sides were down to a force moral of 3.

The British Levies had another go at a second unit of Hearthguard, and thanks to a flank attack bolstered by a few suited cards managed to wipe them out, for very few losses.
To seal the deal the British Elites decided to finish of the fleeing Saxon warriors, which broke the Saxon force, forcing them to flee the field empty handed.

A very bloody and quick game, certainly the bloodiest engagement of the campaign so far.  The watchtowers have already proved their worth, as most of the time the raiders have had such a head start that it has been an uphill struggle.

The final results were a +4 victory for the British yielding a Thief's Horde in plunder and an extra two warriors added to the British Forces. The Saxon forces will have to spend a couple of months replenishing their losses.   Now we just need to see of the Picts.