As per my last post my Dungeon Saga has arrived, and with some rather hyperactive and excitable assistance from the kids we popped out all the tiles and set about bending all models into their correct positions with some hot water.

I have checked the box in detail and everything was present and correct.

I decided to have a try of the rules with my 9 year old and 5 year old children.

We started with the two starter adventures, and they seemed to go down well.  My eldest managed to get a reasonable grasp of the rules, and even Blair, at only five got the general gist of things, even if he struggled with the details.  The biggest difficulty was getting them to overcome their usual sibling rivalry and work together to succeed rather than doing their best to outdo each other.

We played the two starter scenarios in an evening, and then over the course of the weekend we managed to play the first two (Well Met! and Into the Depths). 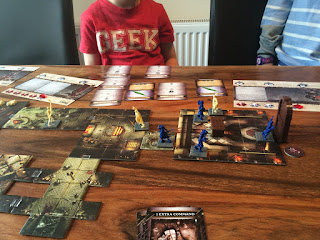 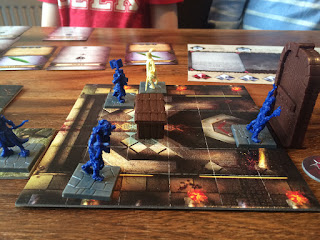 There is plenty of info on the rules already so I wont go into them in any great details, but basically one player players the evil overlord, commanding the denizens of the dungeon, while the rest of the players (between 1 and 4) command 4 mighty heroes, hell bent on stopping the evil overlord in his tracks.  The turns are broken up into two parts; first the heroes get to move and carry out any actions, and when they are finished the overlord gets to carry out a certain number of activations, the number of which is dictated by the quest.  In addition to this there is a time limit on the game, which again varies according to the individual quest. This time limit is set by an Overlord deck.  At the end of every turn the overlord player would take one of these cards, and wen the last one is taken then the heroes have run out of time and the must retreat from the dungeon and come back another time to make a second attempt.  These overlord cards have several benefits for the evil player, including additional activations, raising the dead, interrupt actions that you can play during the heroes turn and some other special effects cards.

We played a light version of the game, with me only using the more straightforward Overlord cards (extra actions and raise dead), and ignoring all the more complicated ones. 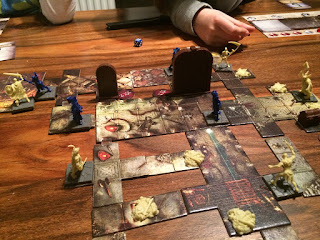 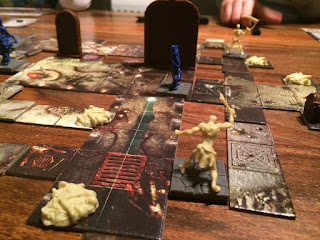 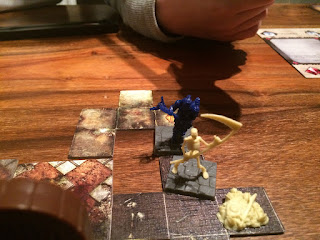 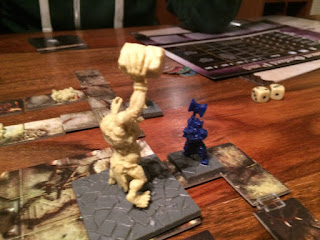 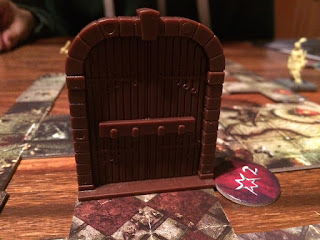 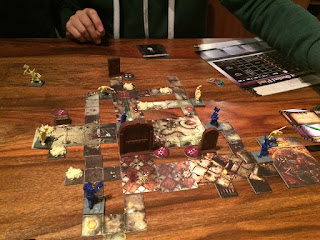 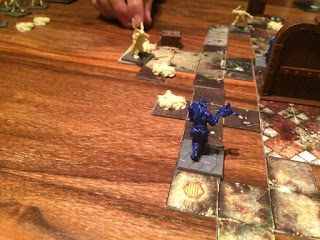 They managed the introductory scenarios fairly easily, and completed scenario 1 by the skin of their teeth. Scenario 2 was where they came unstuck though, failing in the mission by only a turn or two. They are keen to try again though so we will try and fit in another game during the week while they are still interested.  My eldest daughter is particularly keen to have a bash as the evil player as well, so will give that a bash soon.


As to my thoughts on the game itself?

In general I am pretty pleased. The quality of the models is ok(ish), with the plastic being slightly soft. I don't think I will bother painting them I have enough to paint and I only bought this to play as  boardgame. I may let the kids at the heroes though (incidentally Lucy's first comment on inspecting the contents of the box was where's all the girls?).

The rulebook and quest book for all the supplements as you would expect from his type of game, with that slightly glossy magazine feel to them, while all the tokens and cards are of nice quality. I particularly like the texture of the cards used as it makes them easier to handle.

The quests seem to have enough variety in them to keep the game interesting as well, especially if you add in all the expansions.  I also like the book box format for the basic game, it looks quite nice, feels a bit different and will look good on the bookshelf.

Stuff I'm not so keen on?  Some of the board section are already slightly warped, and there are a lot of small pieces.  Also the clips used to hold things together don't look very nice and don't really do their job very well.  We had a fairly hard time keeping things together playing on the bare wood of the dining room table and I would recommend anyone playing the game to put some kind of cloth down to prevent board slippage.

My one major grumble here is the second book box that you got for free if you opted for all the supplements.  The main problem here is that you can't actually get all the bits for all the expansions into this second box, and Mantic know this as the figures etc were all delivered in a separate cardboard box.  I'm sure it seemed like a great idea at the time but in hindsight it is going to cause a few problems in regards to keeping all the bits together. I think I would have preferred to get each supplement in its own retail box as that would have make it all a bit easier to store.

My other grumble here is the Adventurers Companion. It was a great idea to give the game even more longevity and to turn it into a sort of tabletop roleplaying game, but it feels very rushed.  There are a lot of typos in it, with some incorrect text, the stats for the elf's appear to be wrong and most glaringly of all the page references are all missing from the text.  I have not even looked at all the decks of cards that came with it yet, but no doubt will get to it eventually.

All in all I am pretty happy with the game.  The Kickstarter arrived pretty promptly ( are you paying attentions Prodos!?) and it was all there so I cant complain on that front.  Sure some stuff was not quite a shown in the kickstarter, such as the resin counters but Mantis still pretty much delivered.  I suppose the big test is if I am still playing it in six months or a year, and I think I probably will be with the kids. My youngest will probably tire of it but he is only 5, while my eldest seems quite keen.

I am looking forward to getting to the club with it for a few games. then I will get a proper sense of how the game plays.  Whether or not the game survives the arrival of Aliens vs Predator (if it ever turns up!) or Conan remains to be seen, but it is definitely a step up for Mantic.