Our Dux B campaign has staklked a bit over the summer, while people disappeared away on Holiday or just decided to enjoy the nicer weather outside.  Things are starting to move again though and this month my British Kingdom of Alt Clut was to be raided by the Scotti of Cenel Loarn, led by Rory.

The random scenario we generated was the watchtower raid, where an isolated British Patrol were trying to get to the safety of a local watchtower, while being chased down by a raiding party with the intent of capturing the patrol leader for ransom.   The patrol consisted of two groups of warriors, one mounted, led by a mounted noble.  The balance of the British forces were deployed round the watchtower, waiting to decide whether they should sally forth or stay put. 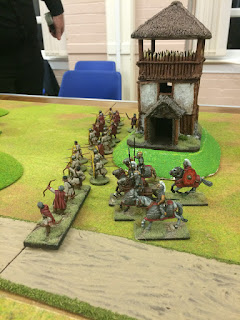 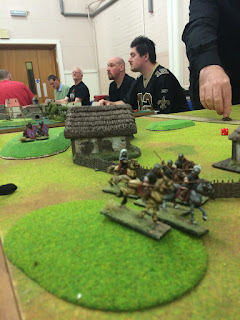 As ever with Dux B the deployment was random, with my patrol deploying on the left hand side of the far side of the table, while the Scotti raiders deployed to the flank of them.  This worked out quite well for me as the Scotti were basically behind my patrol rather than in front of them so they would need to spend the game chasing down the patrol with their cavalry, hopefully leaving the slower infantry behind.

Early game and my cavalry patrol legged it as fast as they could, while some of the British moved forward from the watchtower to provide support. The Scotti gave chase, but the terrain and dice were against them and they struggled to catch up. 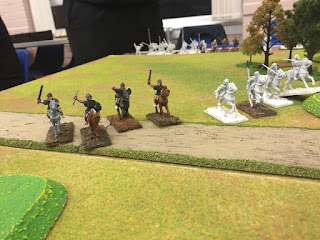 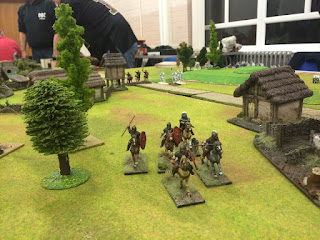 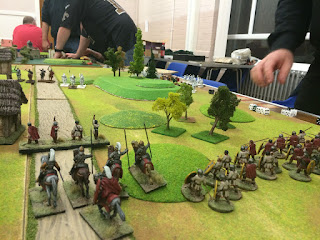 Some shooting followed with a few casualties on either side but by turn three the British were nearly at the tower.  Rory decided to through caution to the wind and charged his noble raider cavalry into my elite cavalry, and after some dice rolling the British Cavalry were routed while the Raider cavalry withdrew due to shock.
In a last ditch attempt to stop me Rory advance with his other cavalry, only to be mobbed by three groups of levy, commanded by my Lord. Under such numbers there could be only one result and the Raiders were all killed, leaving the British safely in their tower at which point the Scotti decided to withdraw. 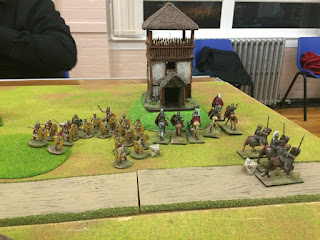 Casualties were light on both side, with 2 British dead and 6 Raiders. The 6 was enough to provide and +3 victory to the British though, which was good as it gave me enough income to construct watchtowers in both of my provinces. I suspect next month I am going to be battling some Saxons for control of my kingdom so I am not sure how much use they will be, but we will need to wait and see.  Both the British and Scotti suffered light casualties this month so will be at full strength for July.

Another strange game of Dux B where the victor was decided by the random deployment and not much else.  Any other result of the die and I would have had to fight my way through the entire Scotti force, but this time the random deployment favoured me rather than my opponent.
Posted by Kevtheinx at 05:31