The last Monday night of the year and I suggested that a game of Lord of the Rings was in order.  I haven't played much of that recent;y and perhaps the release of the last Hobbit movies has put it in my head to have a game.

Rory, Dave and Kenny all volunteered to have a go and I opted to have a bash at the Isen Fords. Rory wanted to have another try at the second battle, this time as the good guys. This suited me as upon opening the box I discovered that Erkenbrand's horse was broken, and as he fights on foot in the second battle we could use him in that one.

We tossed a coin and Rory and Dave ended up as the forces of evil, while Kenny and I took on the roles of the brave defenders of the Westfold. 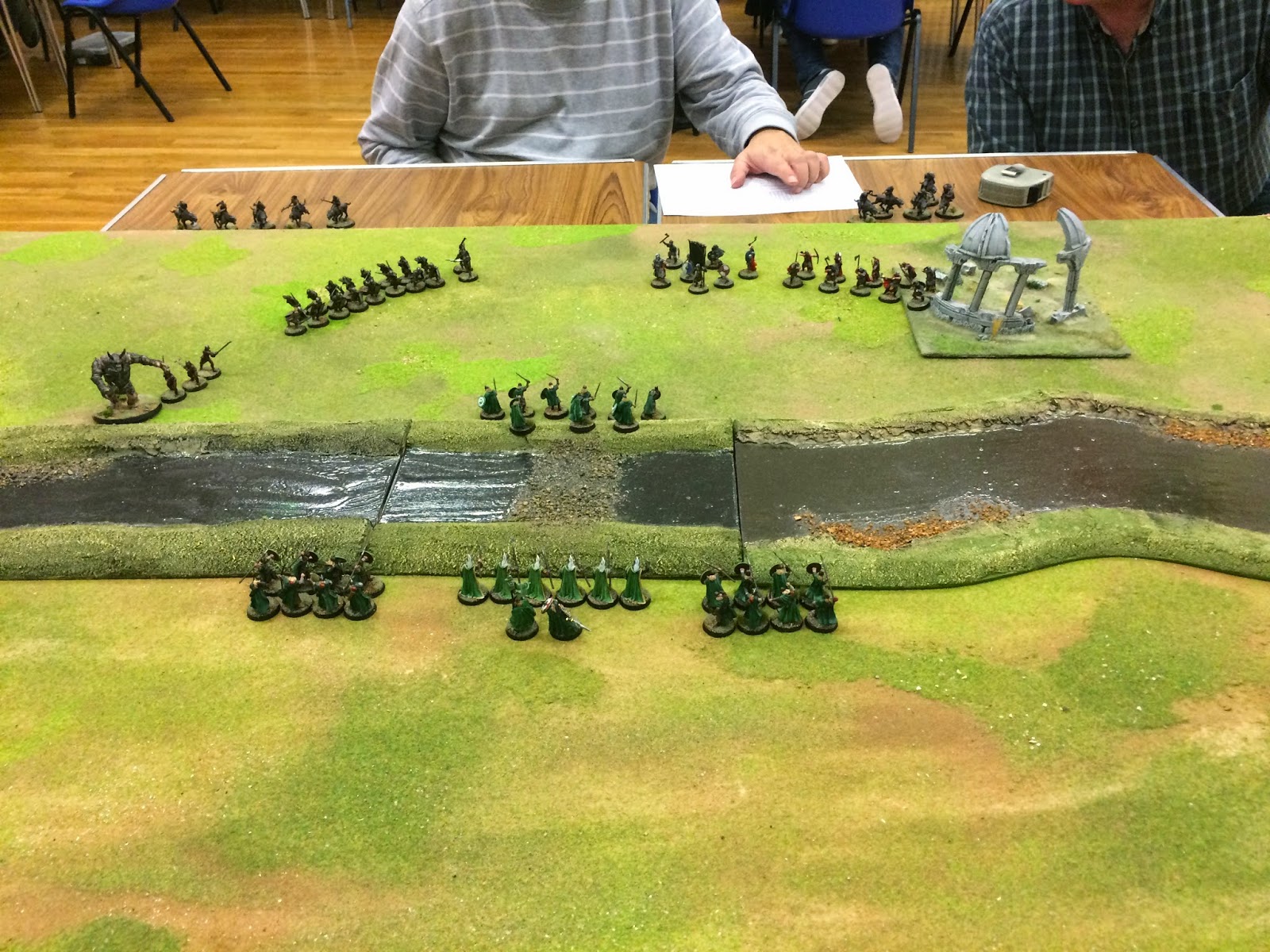 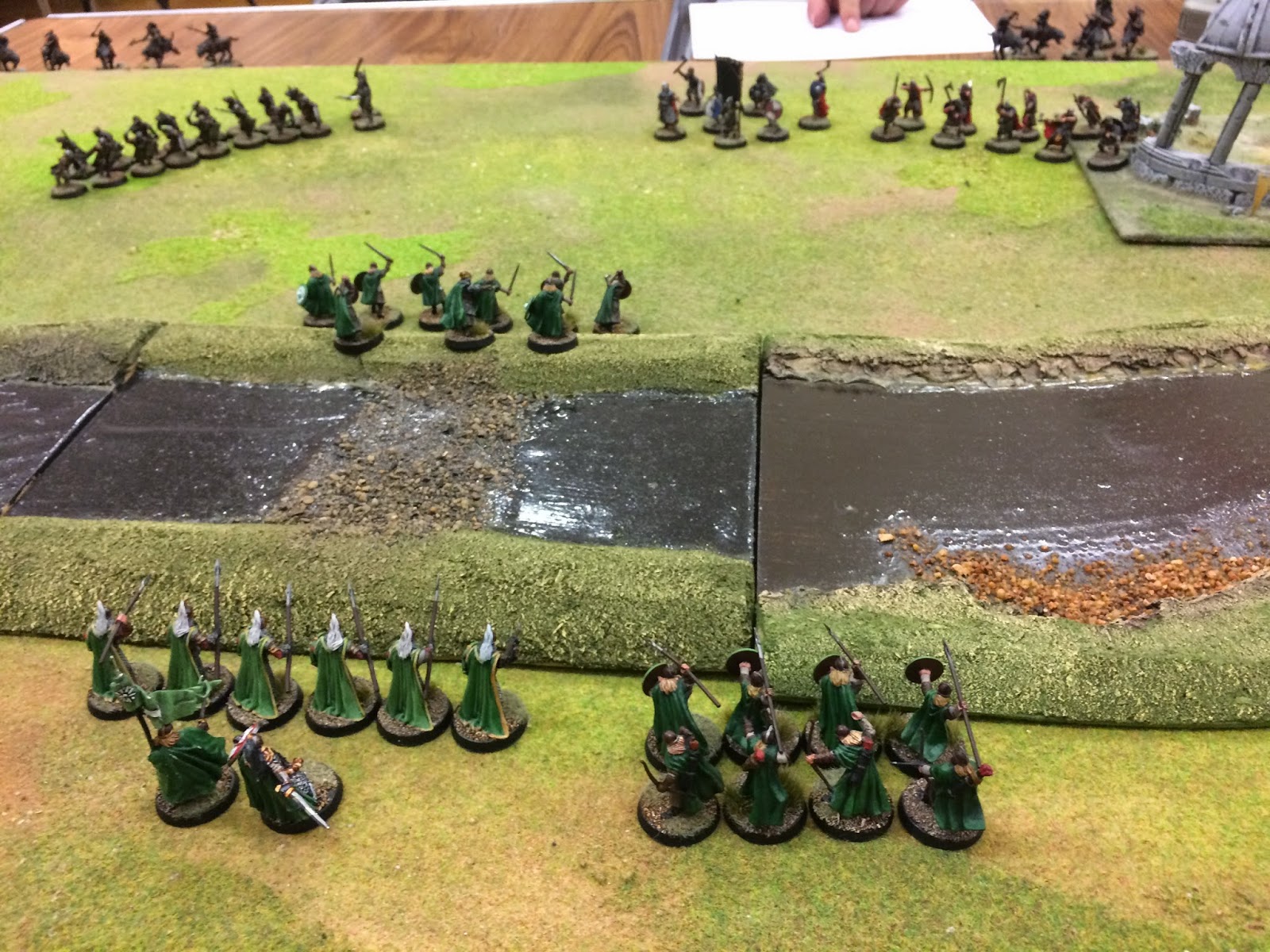 The scenario is very simple.  There is a force defending the fords, and there is a chance from turn three onwards that mounted reinforcements will arrive.  The forces of Isengard, comprising of Uruk Hai, Dunlendings and a Troll (controversial!!!) are to attack the ford, with a flanking force of warg riders arriving anytime after turn 4.  The victory conditions are very simple, the forces of Isengard have to clear the ford by reducing the Rohan to under 25% of their starting strength by the end of turn 10.  Anything else is a win for Rohan.

Things started fairly slowly, with a slow advance from the evil side, while the Rohan stayed still to maximise their shooting. Shooting was fairly ineffective, apart from Kenny managing to take out most of the Uruk Hai beserkers before they hit our line.  In this scenario the river Isen is low and may be crossed at half speed, so the forces of evil waded across. The troll had the fastest movement and so made it across first. At the ford itself my forlorn hope got a good doing over by the Dunlendings as their superior numbers started to count. 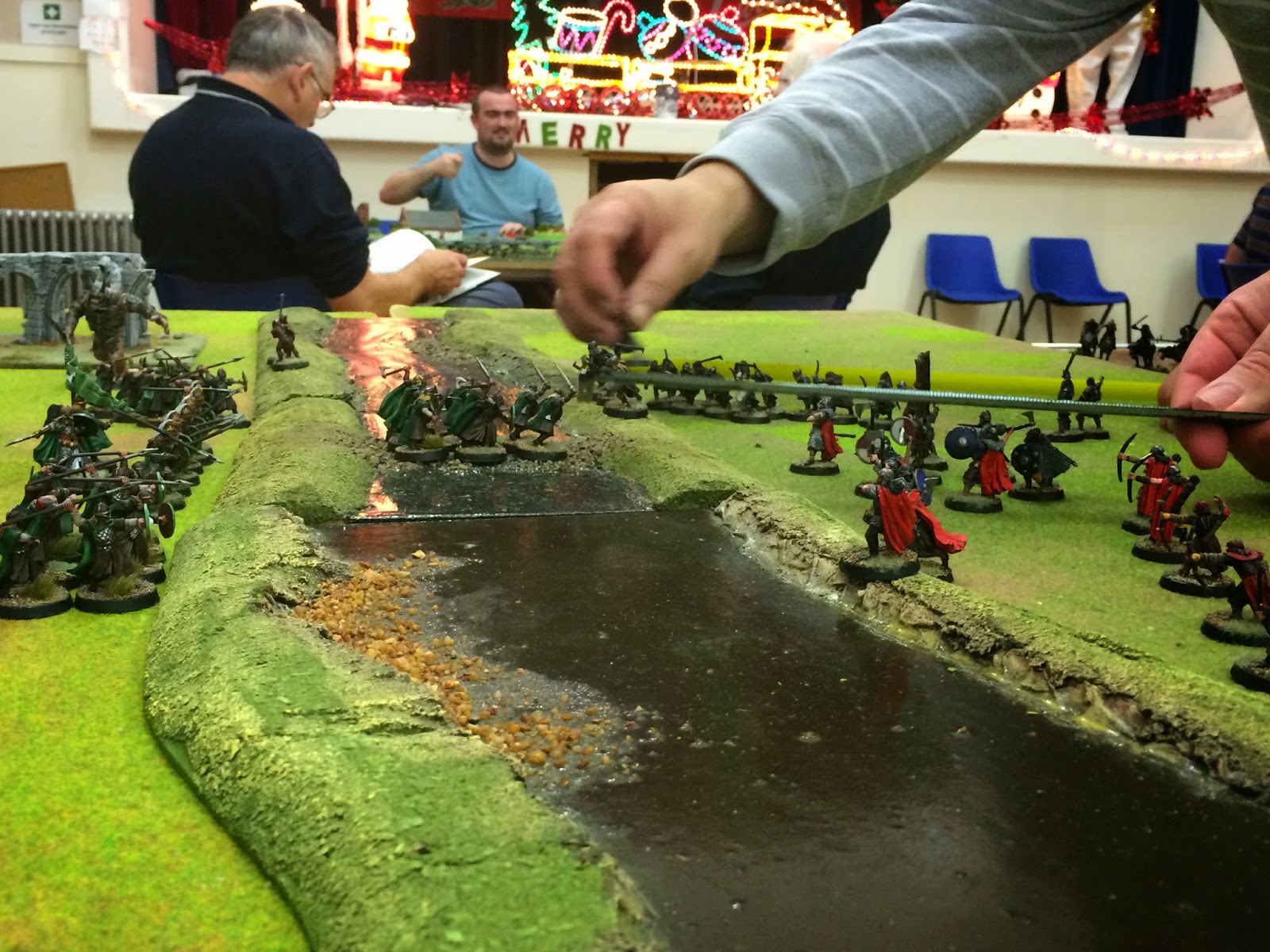 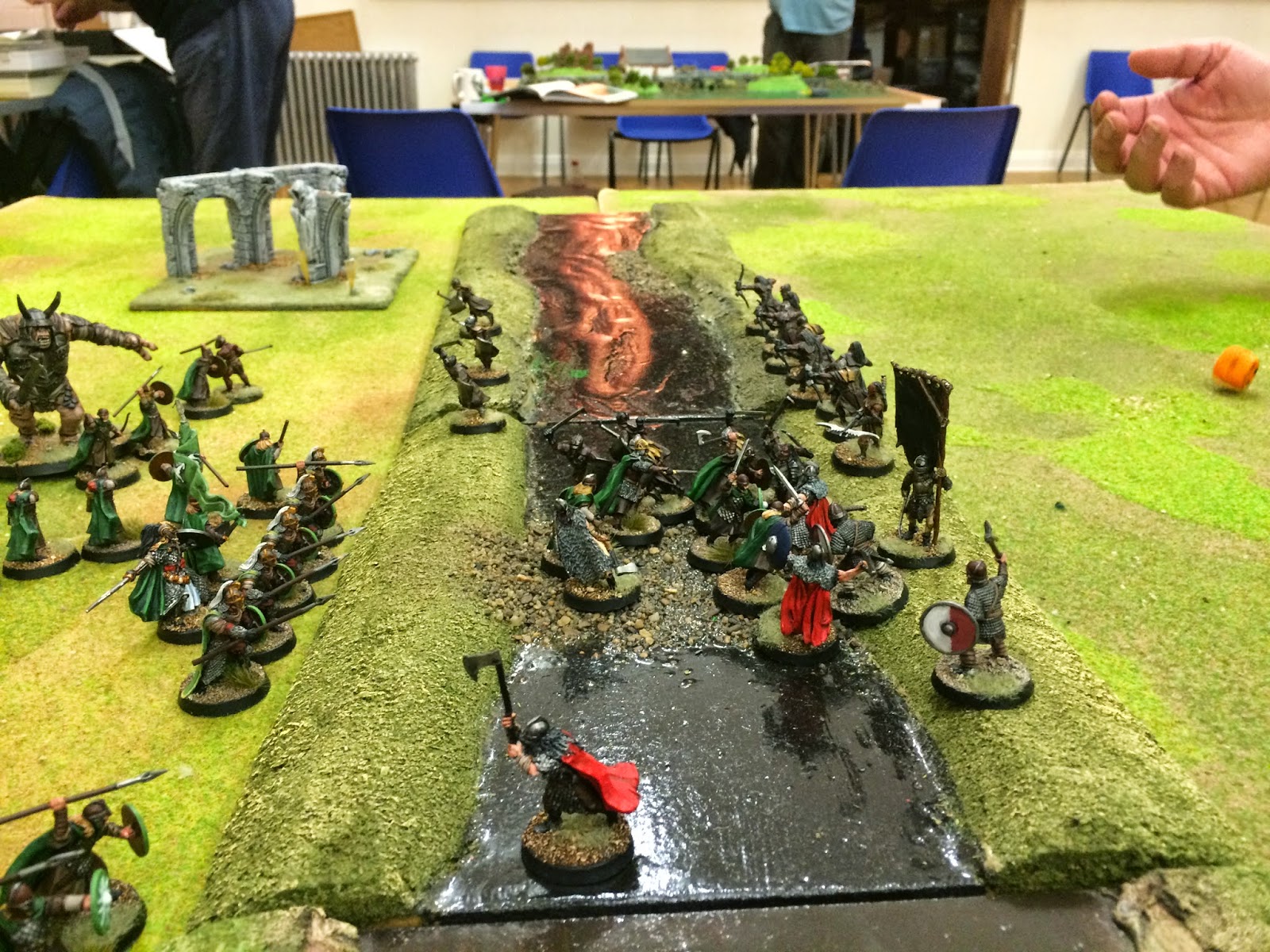 Turn 3 and my cavalry arrived on the field. Hooray!  I withdrew from the fords and formed a line with my Royal Guard at the centre and started fishing about trying to find a brave soul to distract the troll. 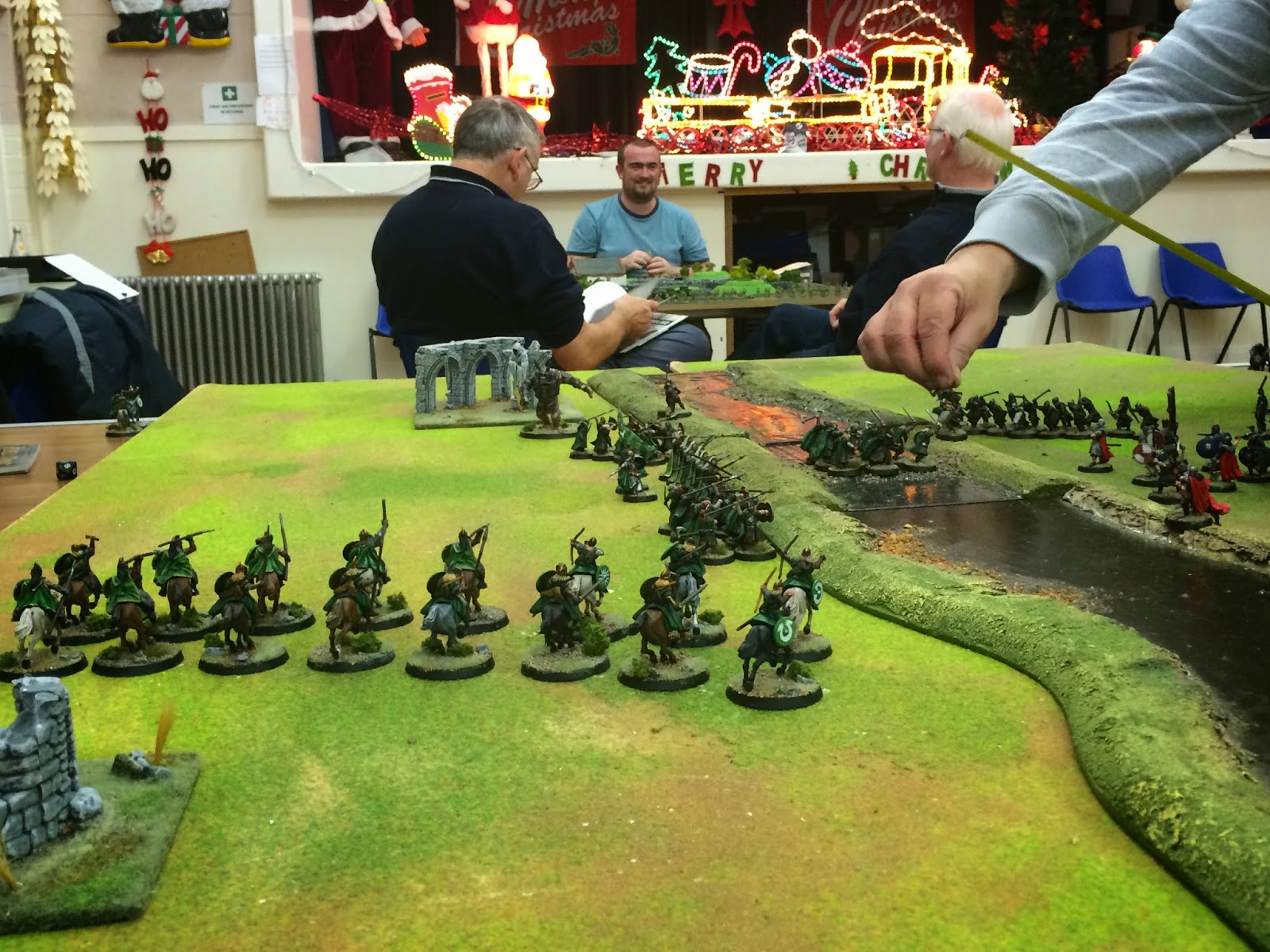 Turn 4 the Wargs arrived (boo!) but they had very limited impact as they wandered on to the field right into the path of my cavalry. By now battle was well and truly joined, with mounting casualties on both sides. The Warg Riders were dealt with, having virtually no impact on the game and we continued to feed the troll with one brave warrior of Rohan every turn. 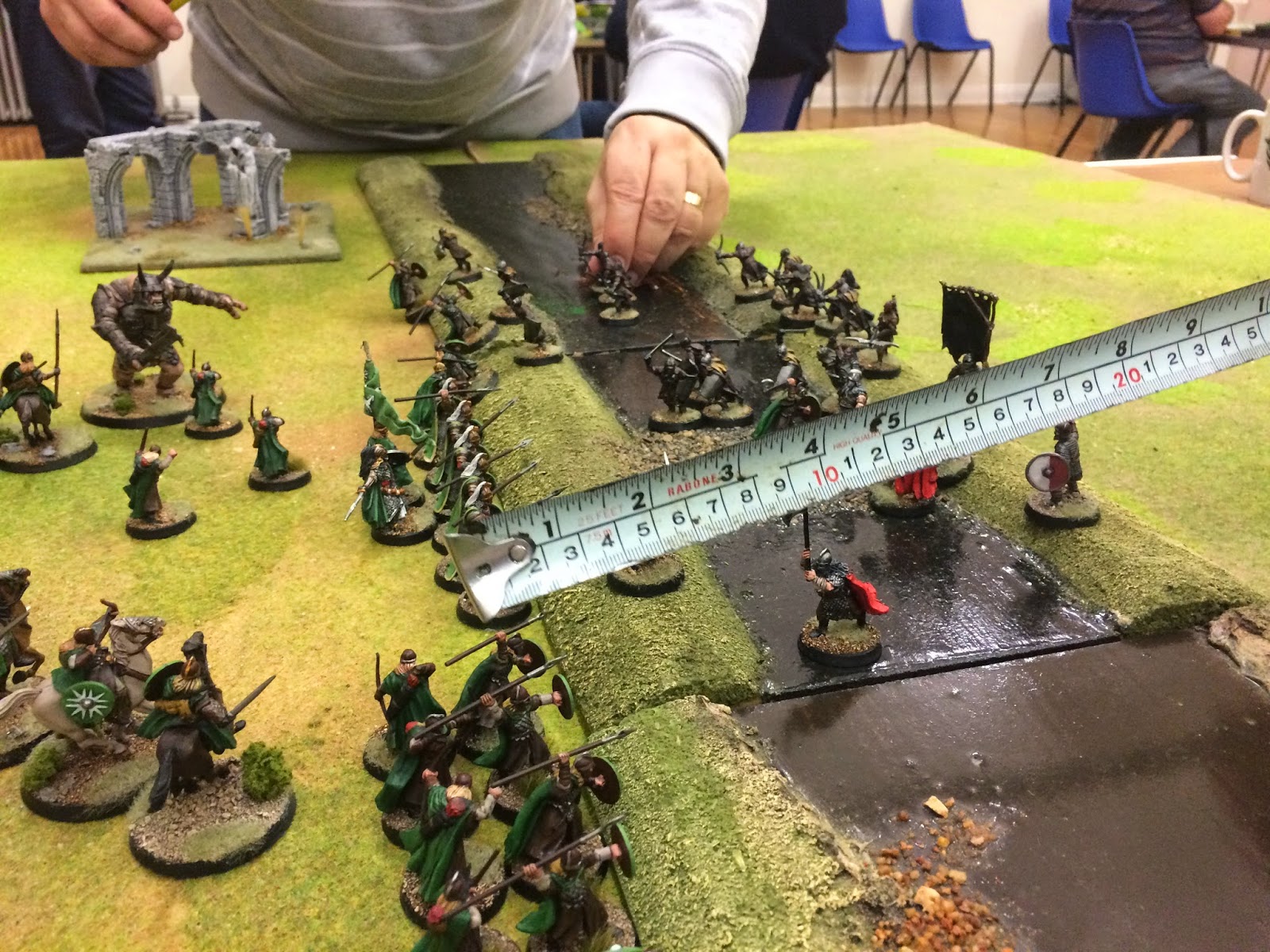 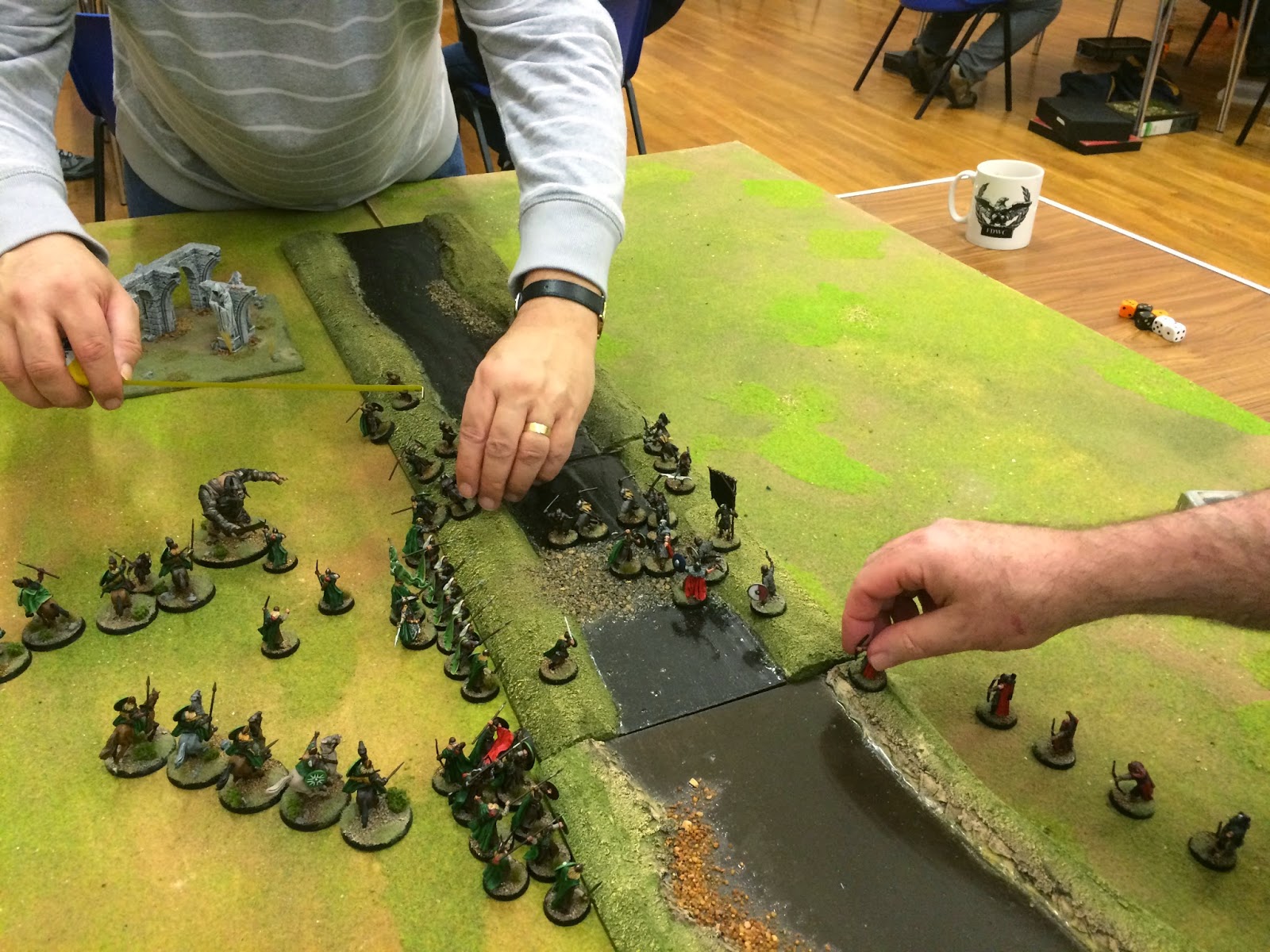 By turn seven the Isengard force was broken and started to disapear. Turn 8 and the Rohan force was broken and started to disappear, albeit very slowly thanks to some very lucky die rolls and Erkenbrand's high courage value.   It all came down to courage rolls in the end and I was very lucky, with 14 Rohan left on the board at the end of turn 10. A victory for the Rohan, but a very close one though! 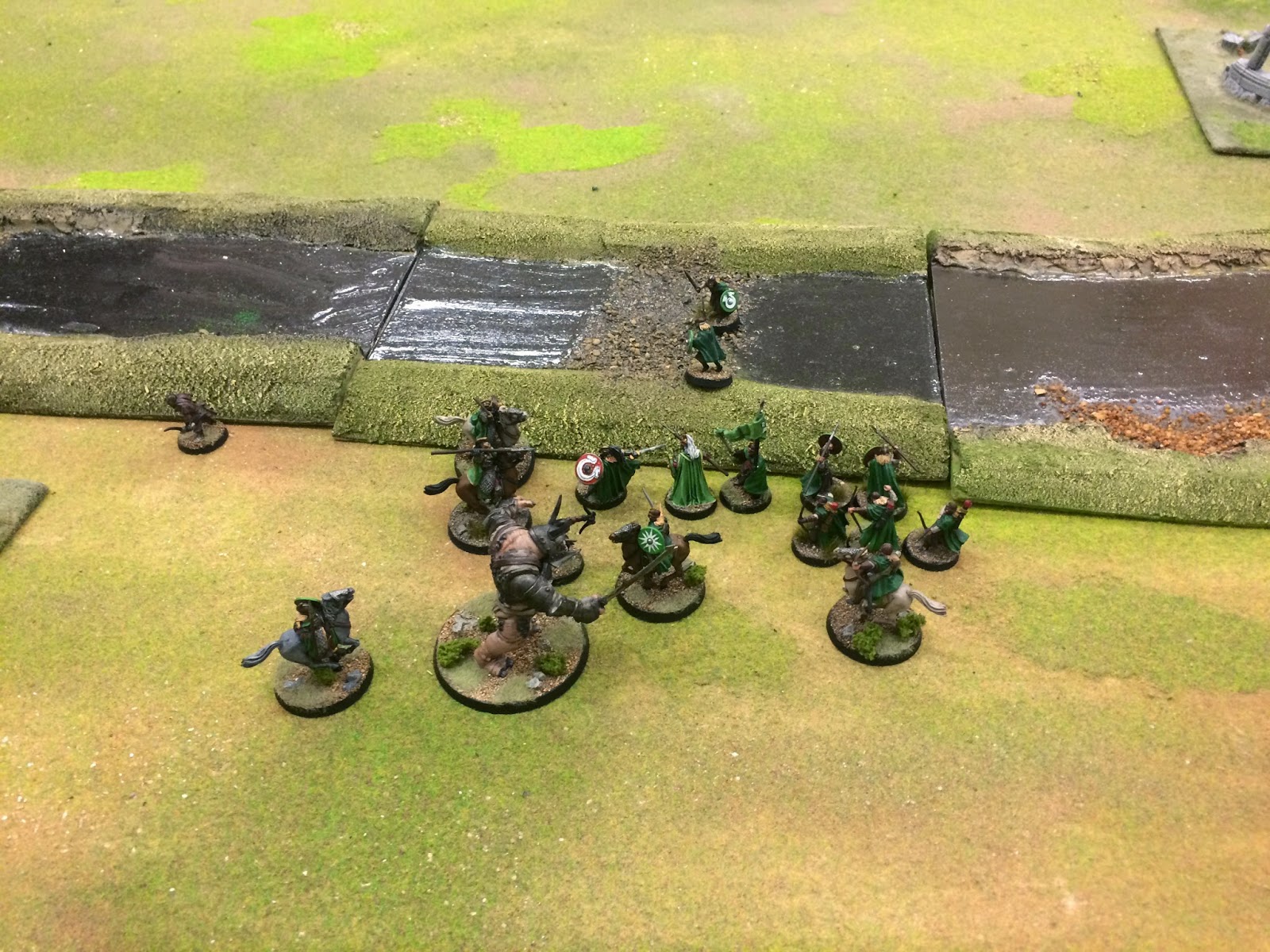 A very enjoyable end to the years gaming, although the Rohan were very lucky.  They managed to win eight out of the ten priority rolls and most of the roll off (thanks Rory!).

I have not played much Lord of the Rings this year and it is one of the things that I intend to remedy in 2015. I suspect that the game will go the way of the Dodo after the last movie has faded from memory so there may be a shopping spree in January as well, to make sure I get the last few bits I am after.    no more gaming for the rest of the year as that is the club closed for Christmas, but there will be the obligatory round up of the years gaming activities to come in the next week or so.
Posted by Kevtheinx at 12:47