They're Taking the Hobbits to Isengard!

I had no game arranged for Monday night this week, so was just going to wander along to the club and see what was going on.  On Sunday night Dave put a post on the forum asking if there was anything going on that he could join.  A few posts later and we had decided to have a game of GW's excellent  Lord of the Rings skirmish game.

I basically brought everything along and let Dave pick the scenario.  He opted for the wrath of Rohan, and we tossed a coin for sides. In the end he opted for the Rohan and ended up as the forces of Isengard.

The scenario itself is fairly straight forward.  Eomer and his band of riders have cornered the Uruks and Orcs at the edge of Fangorn Forest with the intent of destroying them. Unknown to Eomer these are the same group of Orcs who have recently abducted Merry and Pippin at Amon Hen, and also killed Boromir.

For the good player to win he had to completely destroy the evil forces, while the two hobbits had to escape of the board edge that represented Fangorn before the last orc fell.  For the forces of evil to win they had to kill three quarters if the Rohan forces and be in control of the hobbits at the end of the game.  If either side only accomplished one of these objectives then the game would be considered a draw. 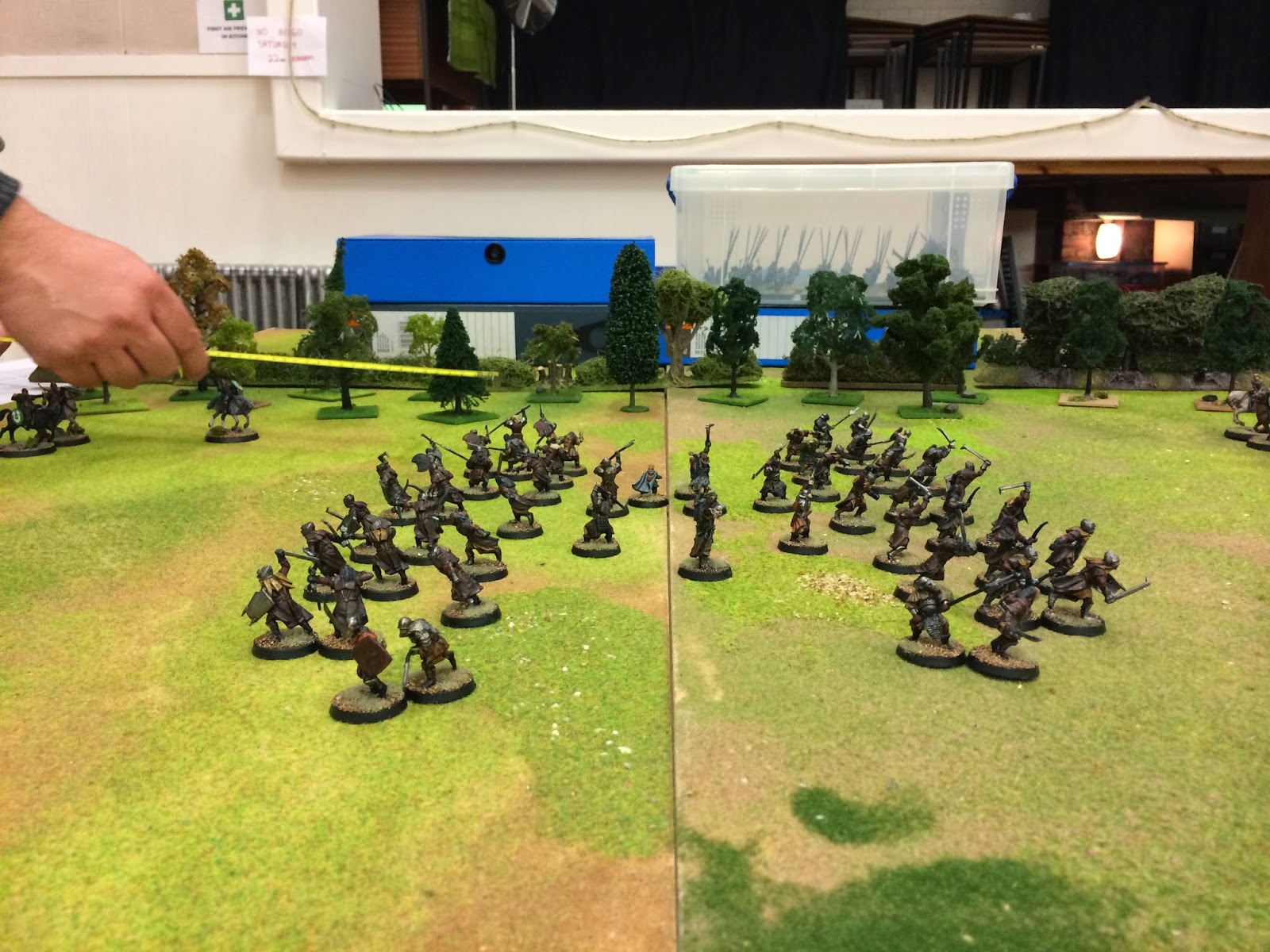 At the start of the game the Rohan decided to approach slowly and make use of the large amount of bows that were present in their force. the forces of evil decided to try and take advantage of the split forces and advanced quickly on one half of the Rohan forces, while slowly backing away from the other. 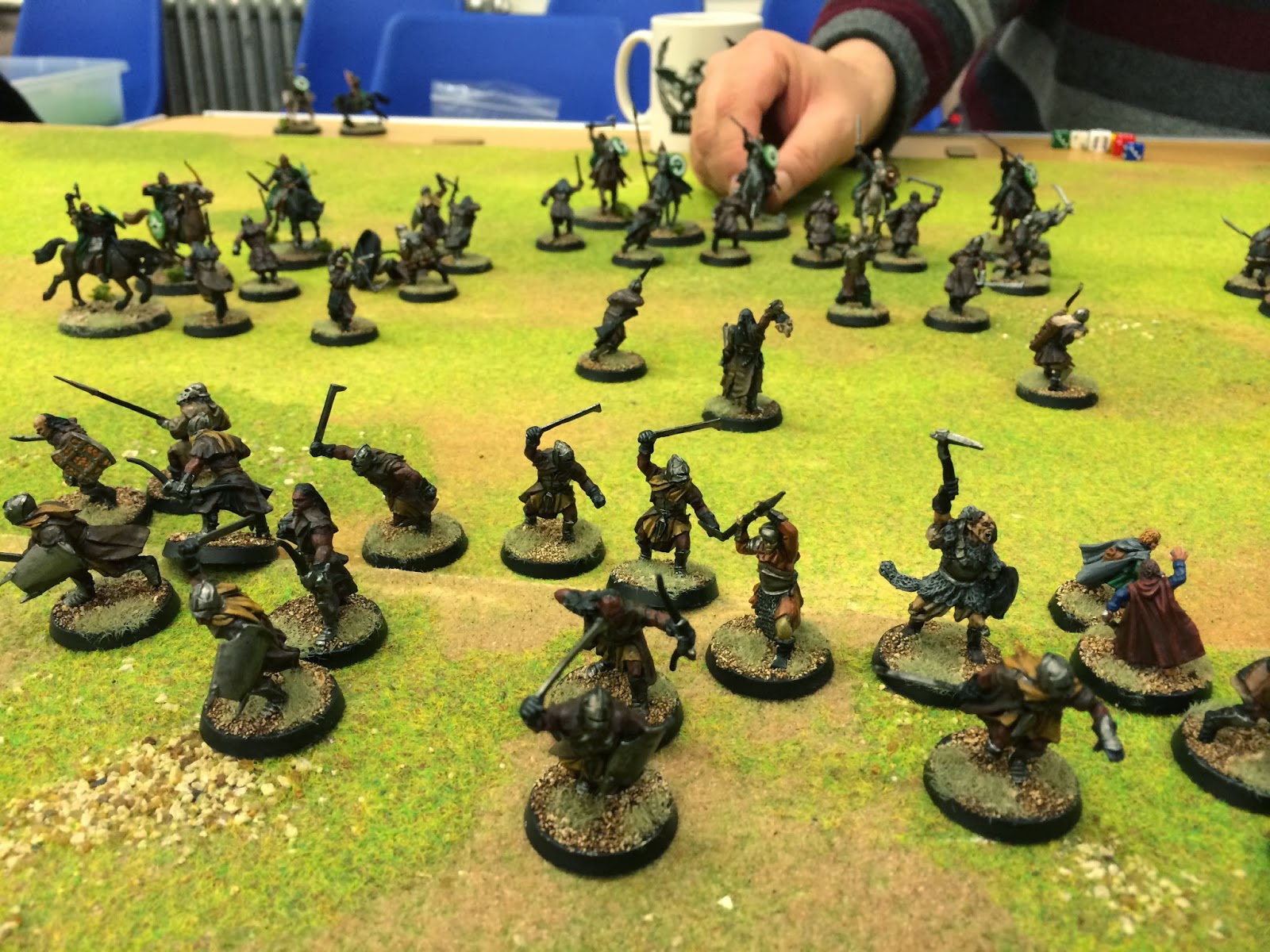 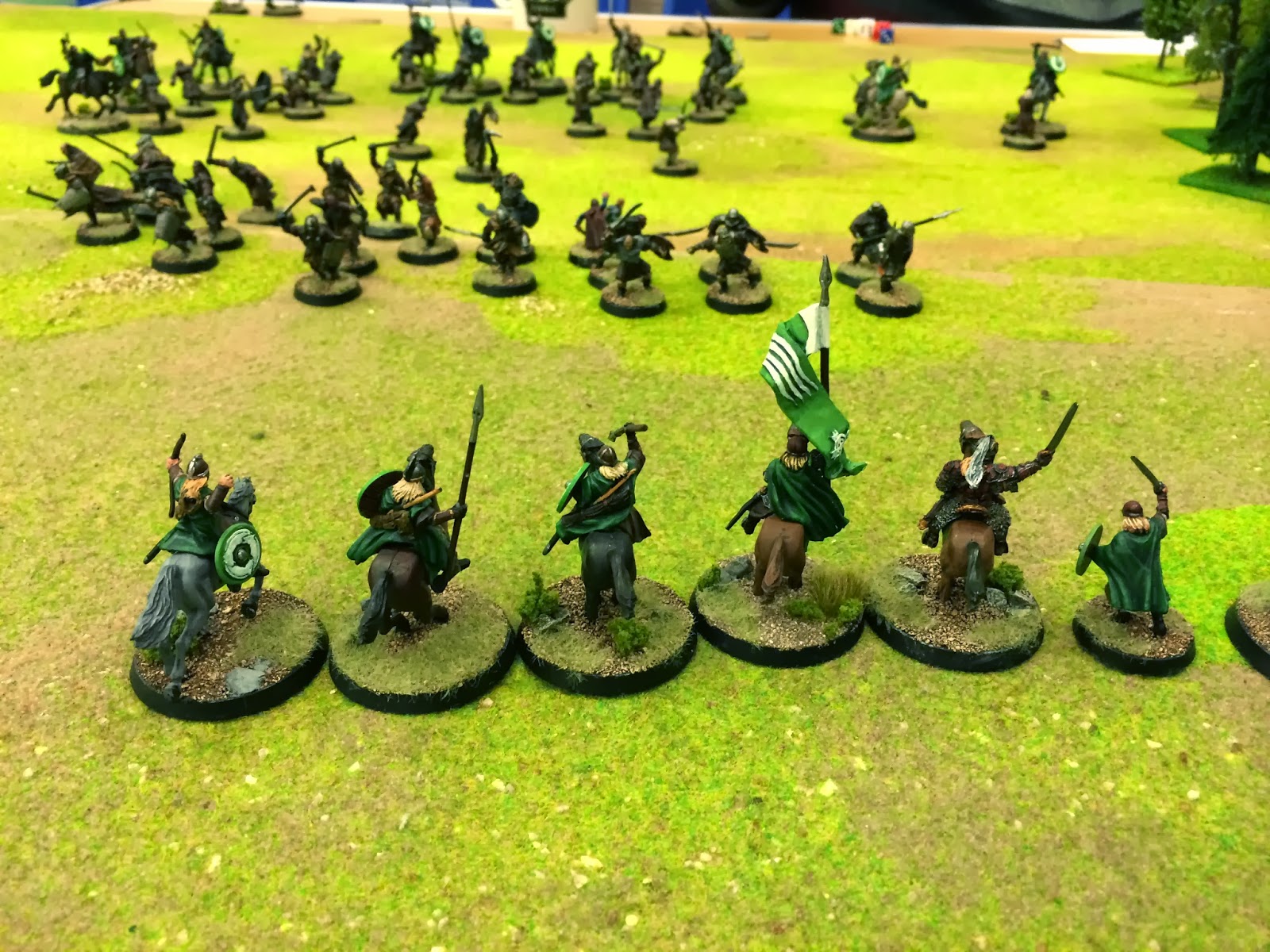 This tactic worked quite well, as I managed to get the drop on the Rohan and took the sting out of their charge. Unfortunately they still proved to be strong fighters and it took me a lot longer than I had hoped to gain the upper hand on that side of the battle.  While this was going on Dave had finally charged in on the other side and started doing some terrible damage to my forces.  In mid game the hobbits made a break for freedom as well, hotly pursued by Grishnakh. 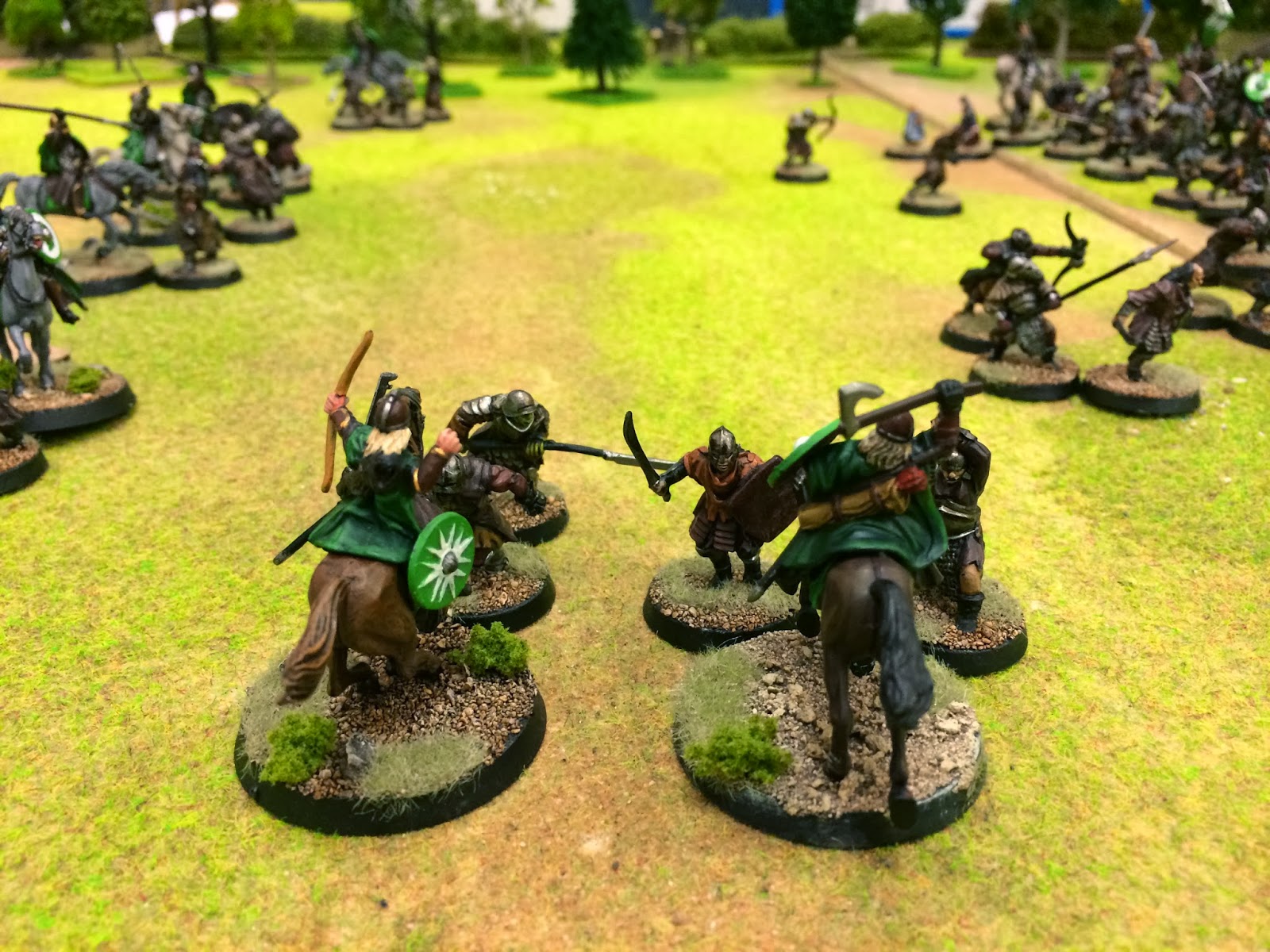 By the time I had secured the western side of the board things on the opposite side were starting to look a little ropey. Grishnakh was trampled into the earth by a trio of Rohan while he was chasing after the hobbits and at one point in the game we were both one model away from passing out force break point.

Both of our forces passed break point on the same turn, with around 13 orcs fleeing the field as a result, although a fair few riders of Rohan decided to leave as well.  By this point of the game I was now fighting for a draw, as the hobbits were firmly out of reach.

Eventually all the morale checks took their toll and even Eomer fled the field.  It came down to six orcs against four Rohan cavalry, with the hobbits two moves from escaping the board.  Dave could have held off fr a while and shot at the orcs, allowing the hobbits time to escape, but that would risk losing more men to failed morale checks, so he opted to get stuck in and hope for the best.  In the final turn of the game there was one solitary orc left on the field, with four rohan left and only Merry still trying to escape into the forest. Win or draw came down to whether or not the orc failed his moral check.  If he failed it then he would flee the field, ending the game and denying Merry one last move that would have allowed Dave to win the game.  In the end he failed and fled the field. This ended the game and meant that both of us had only completed one of our  victory conditions, resulting in a very close draw.

Another excellent game of Lotr, and very close to boot.

Every wargamer I know has one period that they cannot leave alone. For some it is WW2, or Napoleonic.  For me it is Middle Earth. While I may approach and finish a project and then pretty much never add anything else to it (My Impetus Romans, Urban War forces and all my WHFB armies fall into this category), I always keep returning to middle earth and adding to my collection.  I usually add at least a dozen painted models every year, although usually more.

I have a feeling that Games Workshop will probably ditch the LOTR licence in a few years, when it no longer becomes worth the effort and in line with their current policy of entrenchment in known best sellers and ditching everything else, so I am trying to get my hands on all the Middle Earth specific models that I could pretty much only get from them.  I have a good proportion of them already, but would like to include:

A couple of Mumakil (scouring eBay for them is becoming a hobby in itself!)
The witch King on Fell Beast
A couple more Trolls of various types
A couple boxes of Eagles (the only Hobbit miniatures I am likely to get)
A decent force of Haradrim Cavalry, with a few infantry to support them.
The Mouth of Sauron.

I have hundreds of Orcs already and am not very keen on the Warriors of Minas Tirith so would happily use some other manufacturers models for them, but the list above are all excellent models and pretty unique to Games Workshop.

Email ThisBlogThis!Share to TwitterShare to FacebookShare to Pinterest
Labels: Lord of the Rings, Lotr, LOTR SBG