First of the Year

My first game of 2014 was to be a game of Impetus.  Dax had arranged a sort of"boot camp," where he would set up several tables and supply armies for people that have never played the game before to have a go. I decided to join in but brought along my recently completed Late Roman army.
The point were 350, which was more  that we usually use.

I managed to squeeze in:

I ended up fighting against Andy, who instead of using his Teutonic knight types was borrowing Dax's Alexander era Macedonians.  His army consisted of:

3 large pike blocks, each consisting of three units.
2 units of Light Foot
5 Units of skirmishers, each armed with various missile weapons
2 Units of Heavy Cavalry, roughly equal in quality to my own Cataphract.

My plan was to set up all my infantry on one flank and try and hold his pike blocks in place, while my numerically superior cavalry duffed in one flank and then turned on to the flanks of all the pike blocks.  It turns out the enemy commander was Alexander himself and was genius level. Basically all of Andy;'s troops were very very reliable and I did not manage to win an initiative roll for the entire game.


Early game I managed a few successes, with my two units of light cavalry managing to eliminate a base of light foot, and some good shooting from skirmishers.  Eventually though the pike blocks made contact and I was expecting the worst. However I was reasonably lucky and managed to weather the pike blocks, even managing to eliminate one in the later stages of the game! 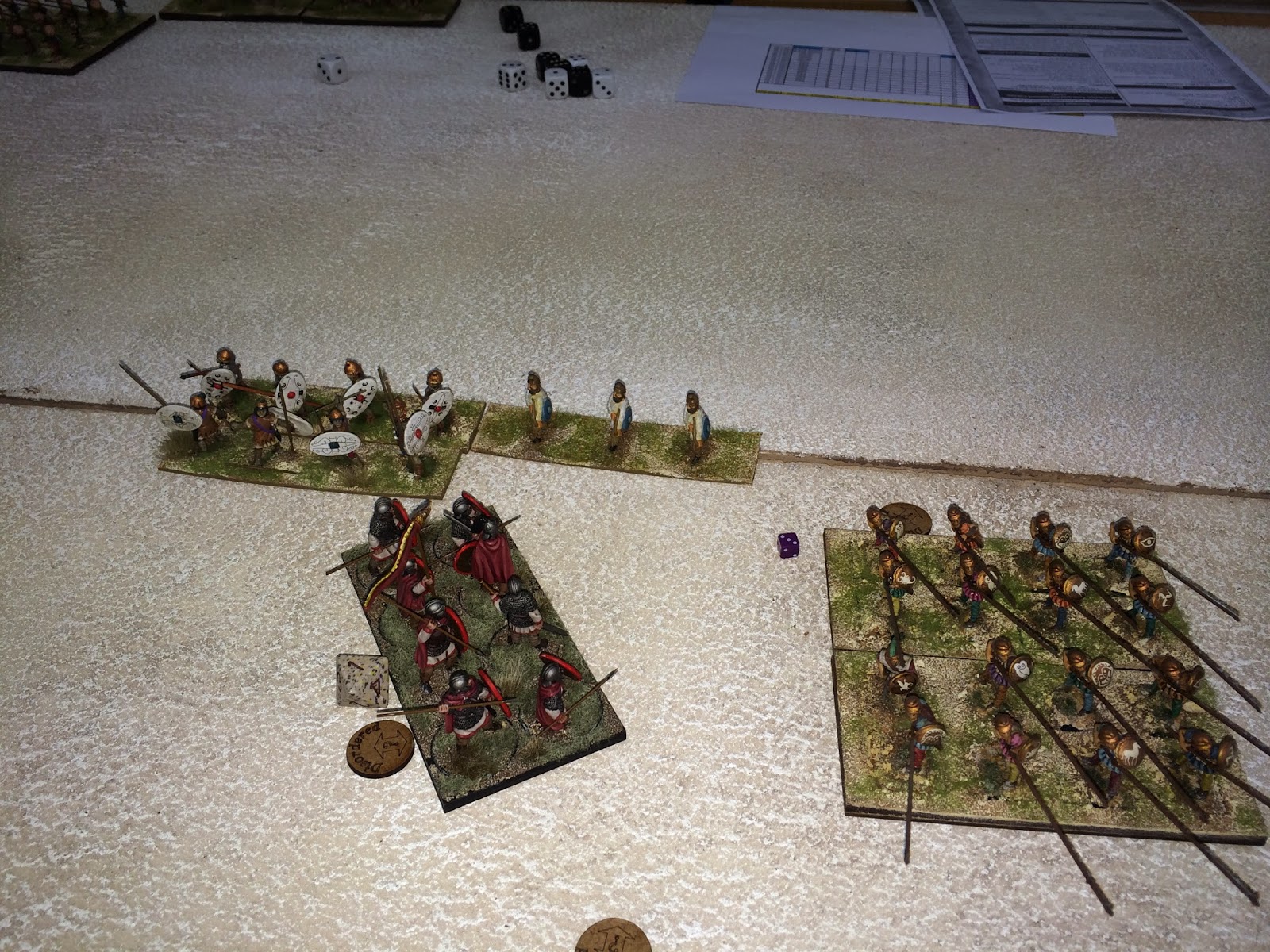 My cavalry on the right managed to make a right hash of things. I had a fairly impressive advantage but all my heavy cavalry kept missing their attacks, or Andy managed to pass his cohesion tests. Numbers tell though and I was managing to make some headway, albeit costly and slow.

Towards the tail end of the game I actually managed to defeat on the pike block and managed to reduce Andy to almost his army break point, while having a healthy margin left on my own. Unfortunately it was business as usual and my cavalry fluffed all their attacks and cohesion tests and what was looking like a good chance of victory in mid game turned into a desperate hunt for a draw. My cavalry let me down and once again ti was down to my heavy infantry to come through with the goods and break Andy's army, leaving me with a hard fought draw.

In the end it was once again my infantry that one the day, with my cavalry punching well below their weight.  It was another really enjoyable game and a fine start to the years gaming. It was very interesting using cavalry that were not all Impetuous and I had never used Light Cavalry before (it showed), and I looking forward to getting in a few more games.  I definitely need to get some Dice of Destiny though as there were a fair few annoying Cohesion test roles on both sides that I would have loved to have altered.

Once again apologies for the terrible photos.
Posted by Kevtheinx at 13:22