Every so often you have one of those nights when things just go wrong.  it happens to me very once in a while. That last time was playing Lord of the Rings against Ian, using the White Rider scenario. That debacle is detailed in an earlier entry on this very Blog.

Well it happened again this Monday.

Just before Christmas I had arranged to have a bash at Chain of Command, the WW2 ruleset from Too Fat Lardies.  I don't normally play that period as it is still in living memory, if you get my meaning, but I am a big fan of Dux Britaniarum so thought I would give them a bash.  Unfortunately I had to call off that game so we had rescheduled it for Monday night.

We ended up playing a meeting engagement, where two opposing platoons are to sweep an area and engage any enemy that they encountered.  Ian ended up playing the British and I took the Germans.

I had three sections, each comprising of a rifle section of 6 men, and Machine Gun team of three men, accompanied by a Junior officer. Leading this lot was a German Senior Officer.

The British force was much the same, except it also included a light mortar and en extra senior officer, both of which were to have a serious impact on the game.

Chain of Command has a 'Patrol Phase' before the game starts, and this is where you try and outfox your opponent and get yourself and advantage in the game deployment. This results in you having 4 'jump off points' on the board that represent areas where there might potentially be troops, but it is up to you to decide which of these points your troops should be deployed from. I found this a bit confusing and only really understood it towards the end.

Ian one the initiative and got first go, bringing on a Bren gun team  in some woods in the middle of the board. I deployed a full section on my left flank, in the hope of covering the road with the machine gun and advancing with the rifle section.

In Chain of Command you roll command dice each phase to determine what you can do with your troops. The number on the die dictates what you are allowed to activate. It is similar to other Lardy game except using dice instead of cards.  When you roll the dice if you get a double six you get to retain the initiative and have another go straight away.  Ian managed to do this with alarming regularity in the early game, which allowed him to push his troops forward and effectively pin all my German troop in place. This pretty much set the tone for the game and I never really managed to salvage anything from there.

To add insult to injury all of my commanders must have been having an off day as every time you suffer a casualty there is a small chance that one of your junior officers will get hit. This seemed to happen a lot and I was starting to run out of commanders by the end stages of the game, while Iain had an extra Senior Commander to help his force along.

To cut a long story short I was seriously outclassed and had pretty much given up by 9:30, and we packed up at 10:30.  I must confess to being a bit frustrated by the whole affair as it seemed I was doomed pretty much by the way the die went, and there was not much I could do about it.

It looked like a good game, but I would need to play it a bit more, under more favourable circumstances to form a proper opinion, as I basically spent most of the night receiving and then trying to remove shock counters and not much else.  The rules apparently reward proper WW2 tactics, but as i am not really a history buff I cannot really comment on that.  SO in a nutshell, they have potential but they were not exactly tested under ideal conditions. I will try and arrange a rematch for February. 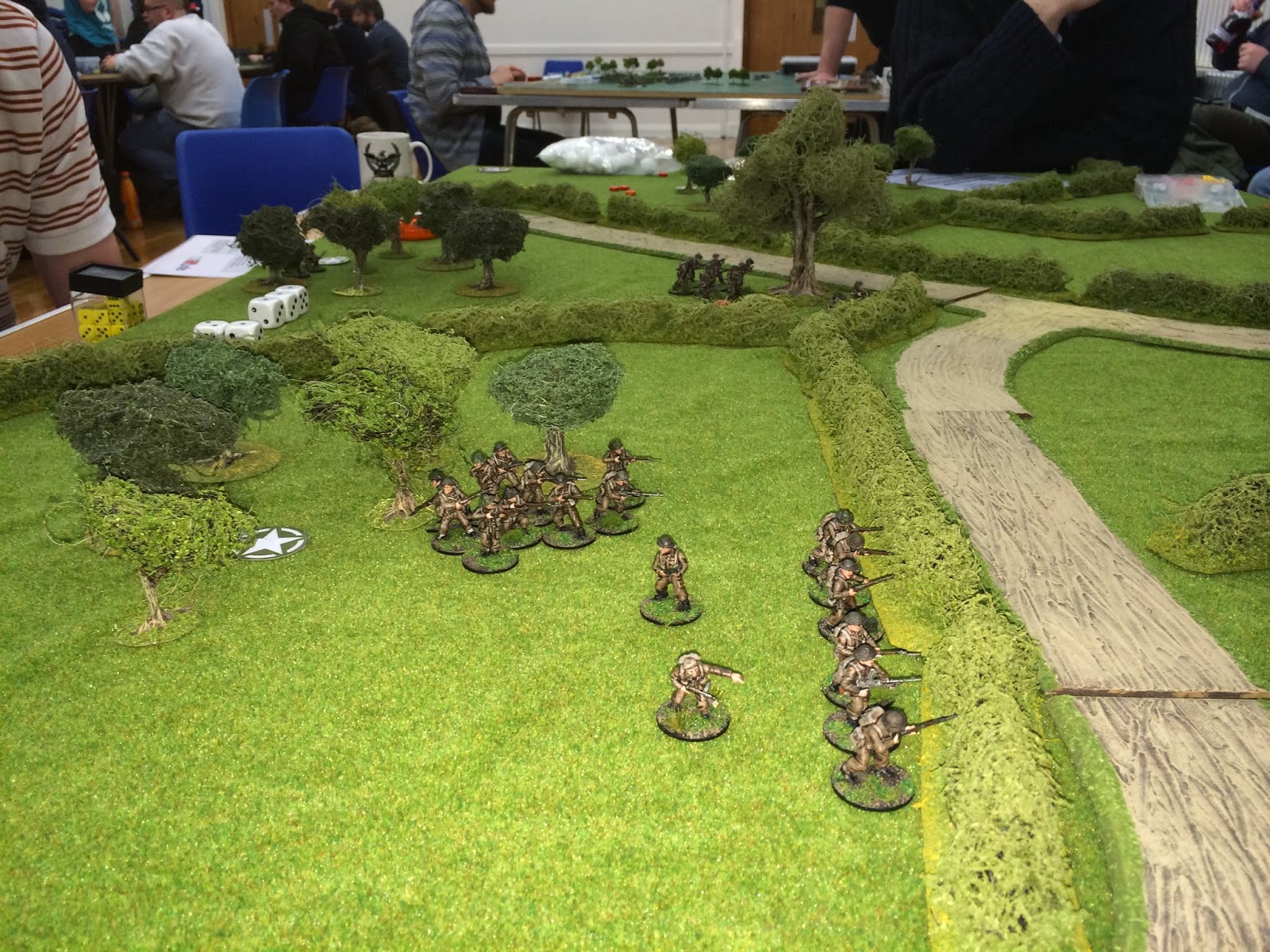 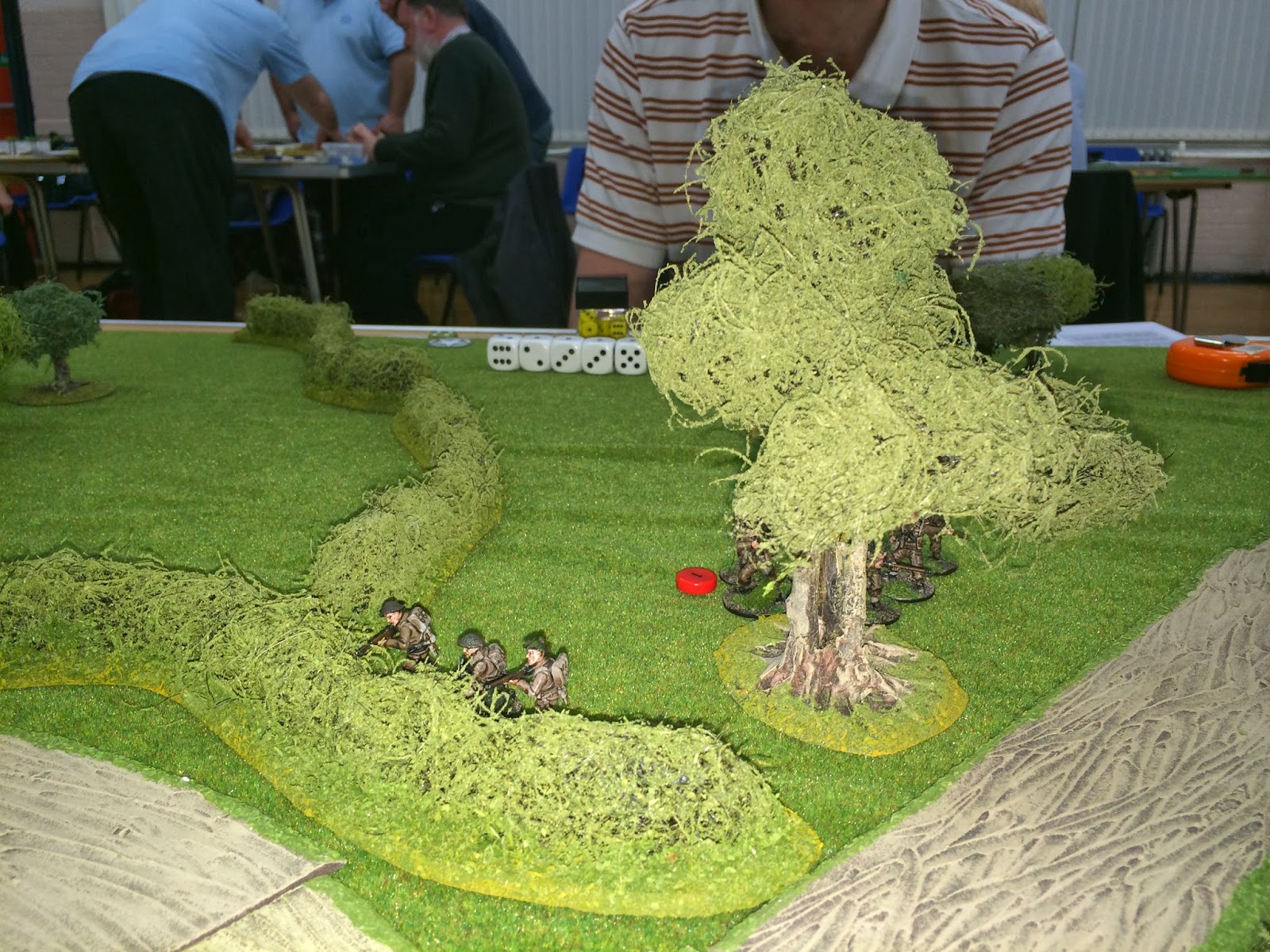 I also did not take too many photos as I was too busy trying to keep up with the rules.

Email ThisBlogThis!Share to TwitterShare to FacebookShare to Pinterest
Labels: Chain of Command, Too Fat Lardys, WW2