Battle at the Mansion, Oldhammer

Once again we opted for 1500points and I just took the same Orc and Goblin army as last time.
Fraser had brought his Undead, which had narrowly avoided getting put on e-bay thanks to the clubs recent interest in Oldhammer.  His army consisted of a couple of units of infantry, one unit of archers, two units of cavalry and a Liche riding in a chariot.

I tried to set the terrain up to reflect the opponents so we put the GW manor house in one corner, along with a couple of Graveyards and some ruined buildings.  The idea being that the Orcs had decided to raid the Manor House, not realising that someone had got there first. Being Orcs they decided that they would have a go at the Liche and accompanying undead anyway. 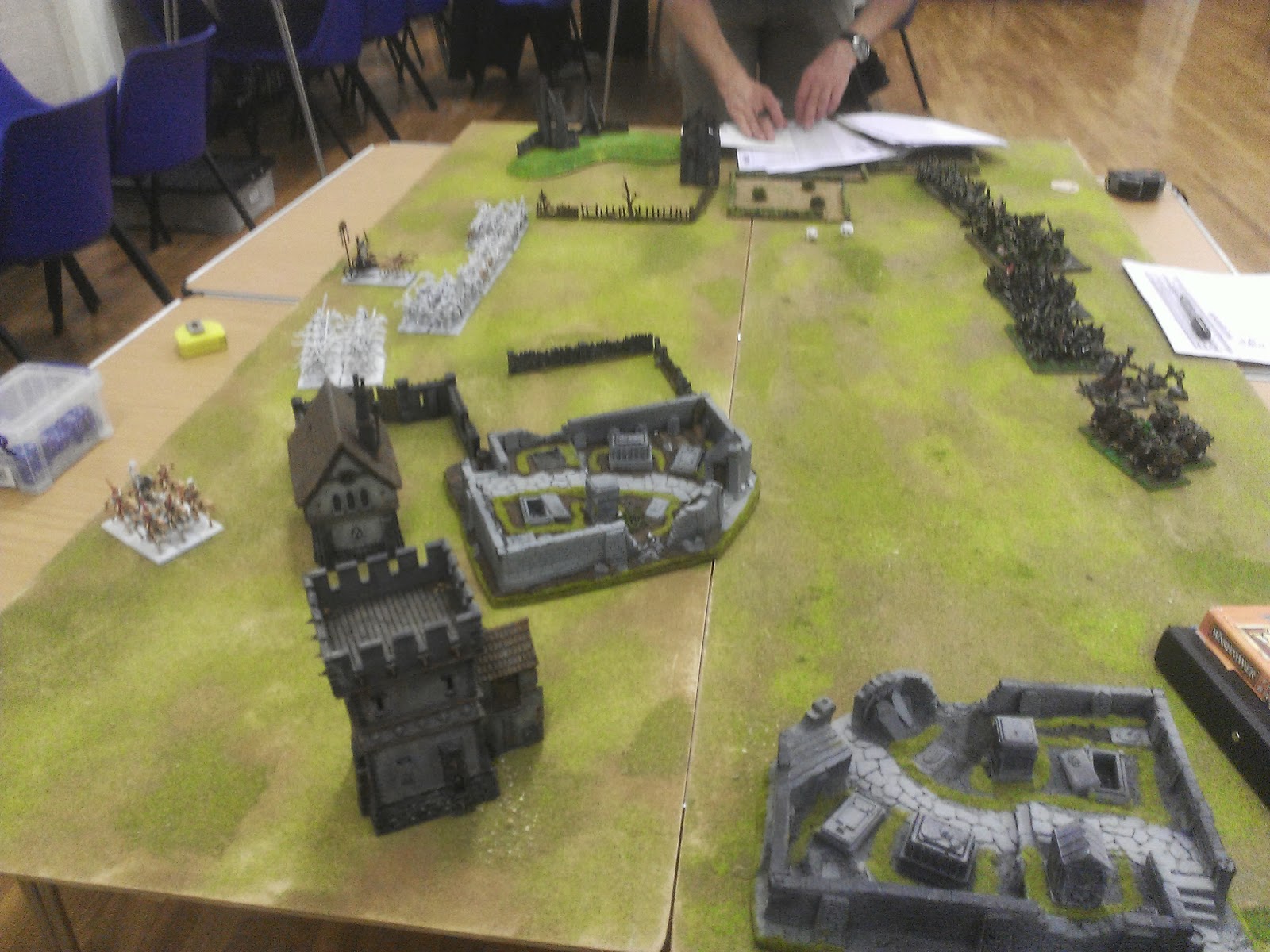 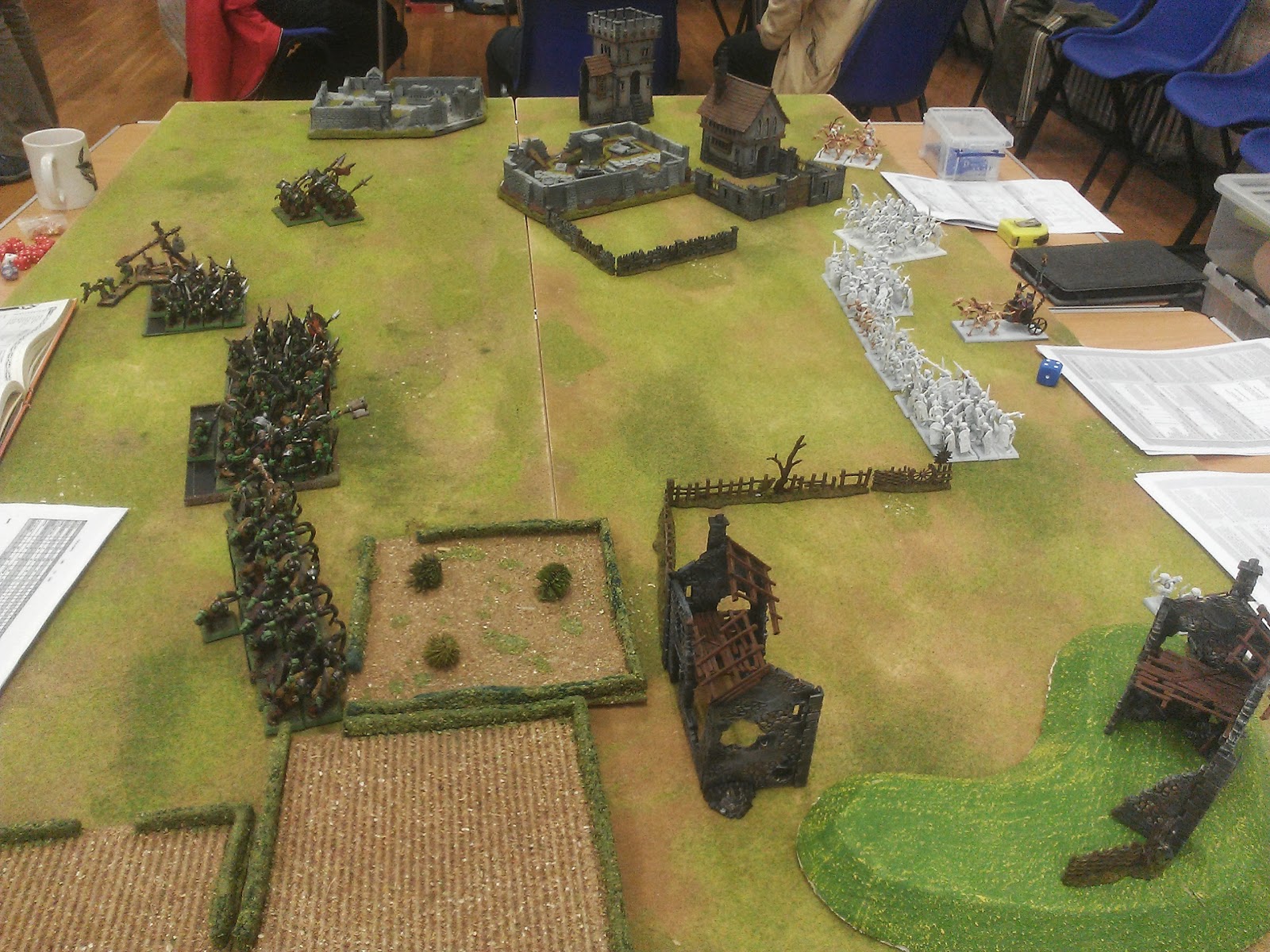 I managed to get the roll of for first turn and my Rock Lobber crew promptly failed their Animosity test!  The rest of my army advanced cautiously, with the Boar Riders on the left heading of to counter the skeleton horse archers that had been deployed on my extreme right.  I started chipping away at the undead with my orc archers and my magic (fireball was the only useful spell I managed to generate).  In his turn Fraser advanced as quickly as possible and returned fire with his skeleton archers, but inflicted no casualties.  In the magic phase he summoned an Undead Hero, to allow him to control his army better. 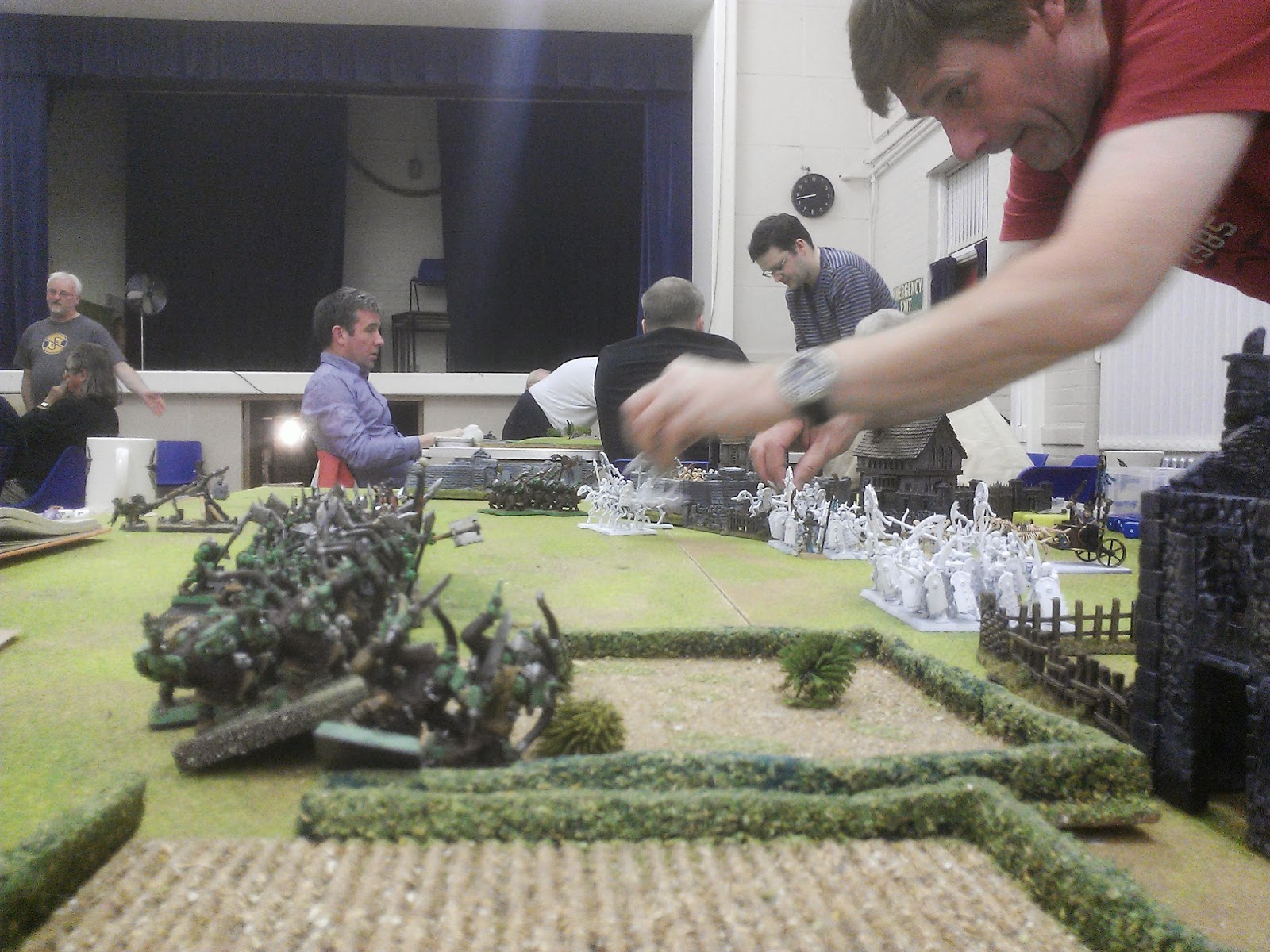 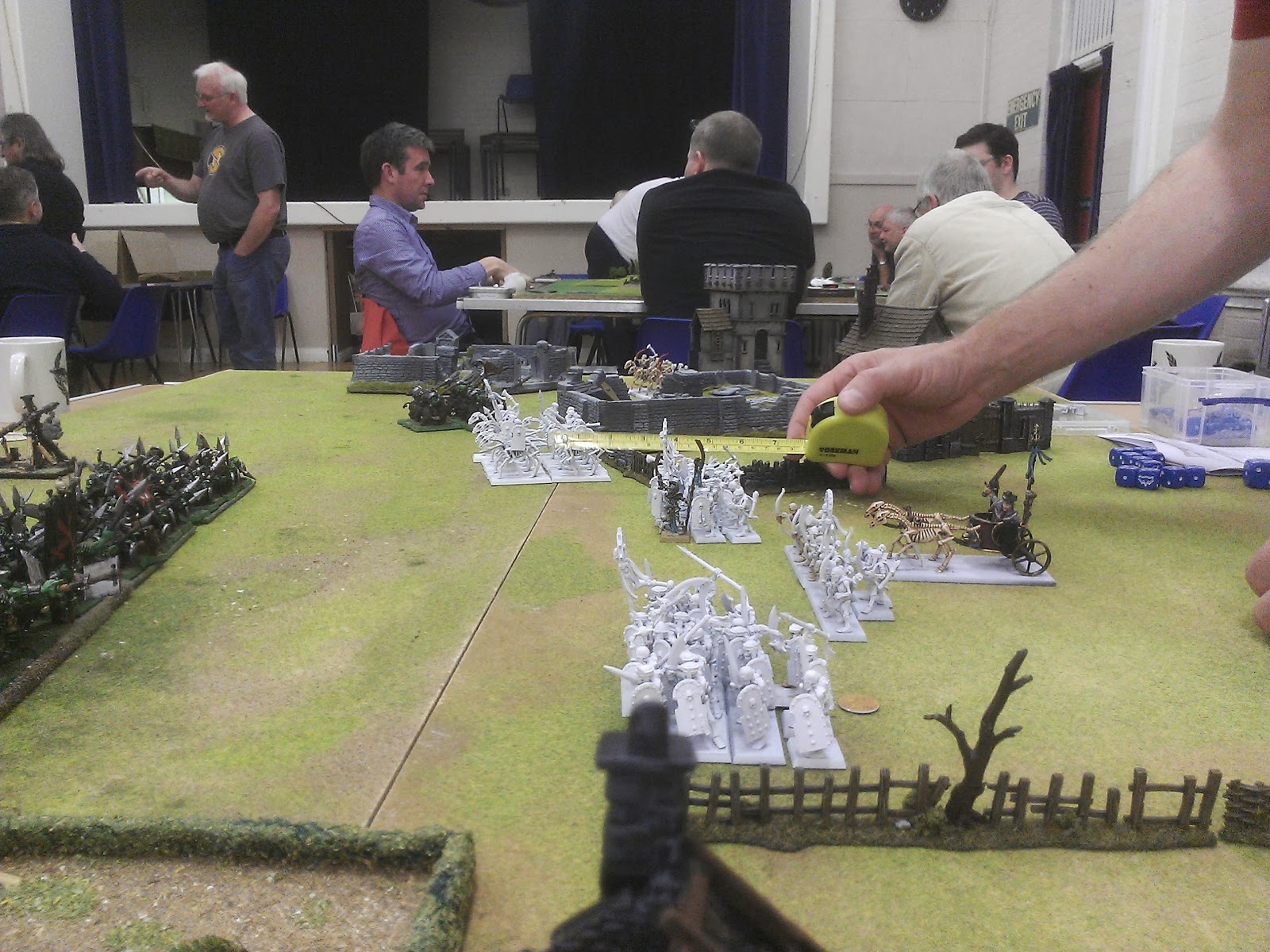 The first combat of the game took place when my Boar Riders charged into the skeleton horse archers, on my extreme left flank.  The Boar Boyz passed their fear test and wiped out the skeletons in one fell swoop.  As it turns out that was going to be my only success of the night. In the centre the other unit of skeleton horsemen charged one of my units of goblins. There was a fanatic in the unit and he rolled a double six for movement, crashing straight through the skeletons, killing 2 and then ploughing straight into the wall that was behind them, killing himself there and then. In the ensuing combat my goblins fared badly, and as the skeletons caused fear they broke automatically, with the skeleton horsemen in hot pursuit inflicting lots of free hacks.

This then caused a raft of panic tests in my line of troops, which everyone promptly failed, withe sole exception of my orc archers, mostly because they were out of range and did not need to take one.  As my main Orc unit was in combat with a unit of skeletons at the time they were also chased, suffering lots of free hacks as well.

It was pretty much game over at this point, as two thirds of my army was routing, with two units getting no opportunity to rally.  The final thing I did manage to do was turn the boar riders round and charge one of the units of skeleton foot, convincingly beating them.  They promptly rolled a one for their instability test, meaning that if I managed to push them back again they would all be dispelled. Alas it was not to be as the skeleton horsemen had seen of the unit of goblins that they had just beaten and charged the boar riders in the flank, who promptly failed their panic test and fled.  That was pretty much game over so we called a halt there.


This was another good game of Oldhammer, with Fraser deciding to keep his skeletons for a while longer as he enjoyed himself.

One thing that really became apparent from this was the difference that can be made to the army by the presence of the Int, Wp and Cl stats. While it is fairly easy to get the Leadership stat up it is not so easy with the others. This really makes a difference with armies like Orcs as they have fairly poor stats in this regards. The low Int on Orcs and Goblins making their spellcasters a lot less reliable than say, elves with their very high Int, as it should be.  in the end it was the low Cool stat of the goblins that was their undoing, causing them to fail a lot of panic tests.
Another thing we decided was that the units do not need to be nearly as big, with units of 20 Orcs probably being planty big enough and perhaps 30 for goblins as this puts of the need to make a rout test until you have lost a fair few models.

All in all a successful test and I am looking forward to my next game of Oldhammer.  It is great fun, but I will not be trying to purchase an army of Oldhammer era models as that would probably be a little bit on the expensive side!  So I will jsut use the models I have for now.

The next few weeks are all about Impetus.  Our club is hosting a tournament at the end of October and I offered my services to anyone that wanted to get a refresher on the rules.  Impetus playing seems to go through peaks and troughs at out club, with peaks happening in the run up to any tournaments that are happening, and then troughs occuring just after the tournament has passed.
I am not a tournament player by any stretch but if you want to understand how a set if rules work then the best thing you could do is play against a seasoned tournament player.